The deepest impact on Sanjay Kumar Raj has been, he professes, the experience of having grown up in tender rural climes and having lived amidst nature, observing its elements in all their splendor, from the creativity of the changes of forms and shades, to its softness and nurturing warmth — and then acknowledging the brutal assault the world has mounted on this very truth. The irreversible damages caused by indiscriminate modernization, pollution, use of resources and the resultant natural calamities and their impact on the most disenfranchised communities is a reality that lies at the very core of the art created by Sanjay. Expertly using watercolours, pen ink, Fevicol and more on paper and canvases, he brings to life surreal, highly symbolic and esoteric pieces that draw the viewer into a wonderland of interpretation. For instance, in the piece titled ‘Mountain Shadow-12’, against the backdrop of a blue sky filled with clouds, we see the resting outline of a tiger, sitting royally splayed on a carpet-like patch that resembles both a trampoline and a tarred road. The body of the tiger (its identity visible only via its typically striped paws and a tail that, unusually, ends in a lotus bloom) is draped a green, grass-like cover, making the entire figure look almost mountainous in nature. Surprisingly, its face is brutally chopped off, in its place left only a flat surface that can be interpreted as raw, bleeding bark, encircled by a few fly-like birds. Elsewhere, in ‘Outside the Village-2’, several common motifs chaotically overlap and form a crowded landscape full of symbols. We can discern a towering shell standing in the epicentre of this cacophony, a rooster, an apple, a pair of bananas, trees, both standing and hewed, bags of furniture, sacks from the granary, the outline of a home, an airplane, and a mountain standing against what is either a sky or the waters of the ocean — nature and needs of humankind juxtaposed into a heady still-life. 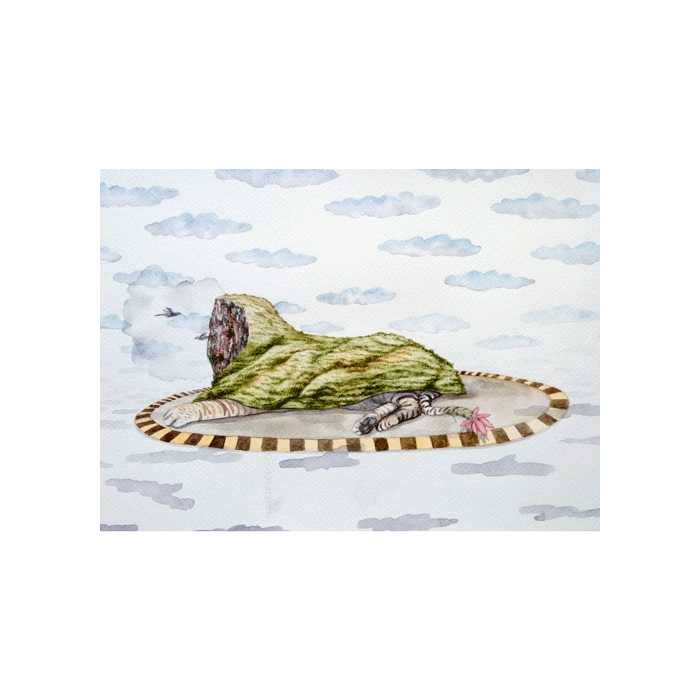 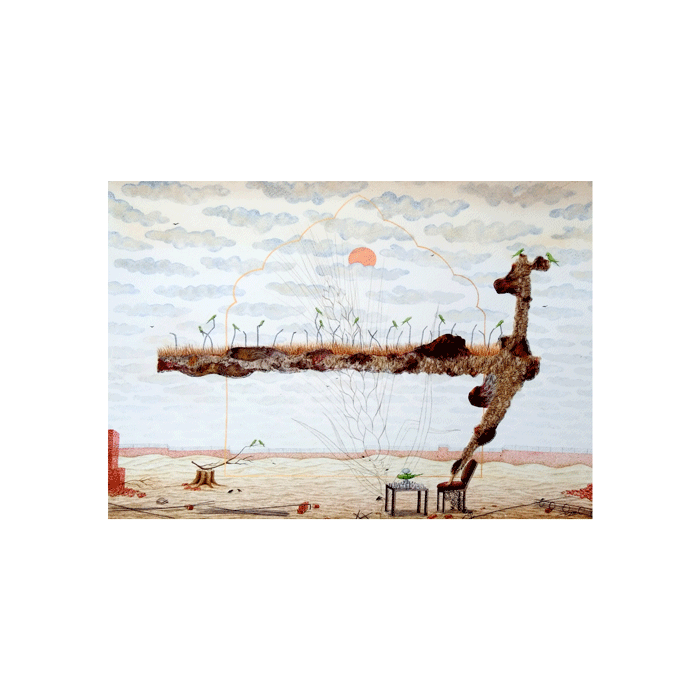 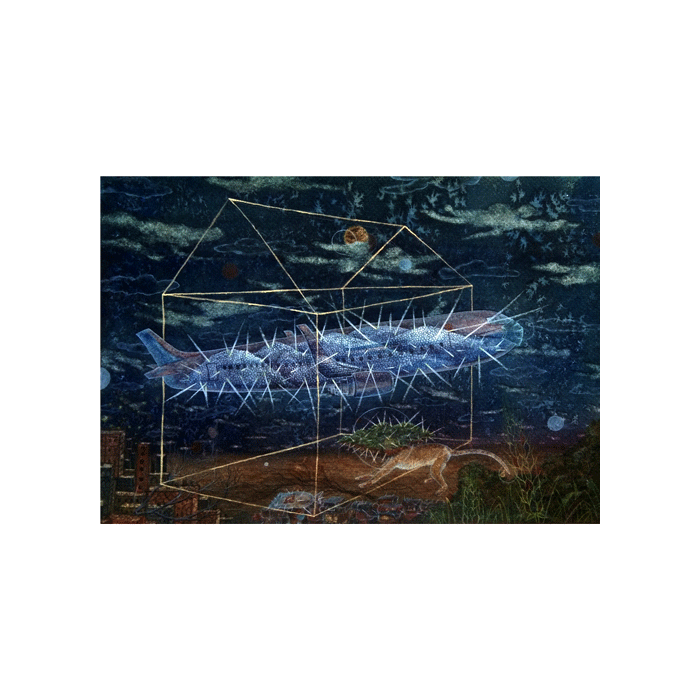 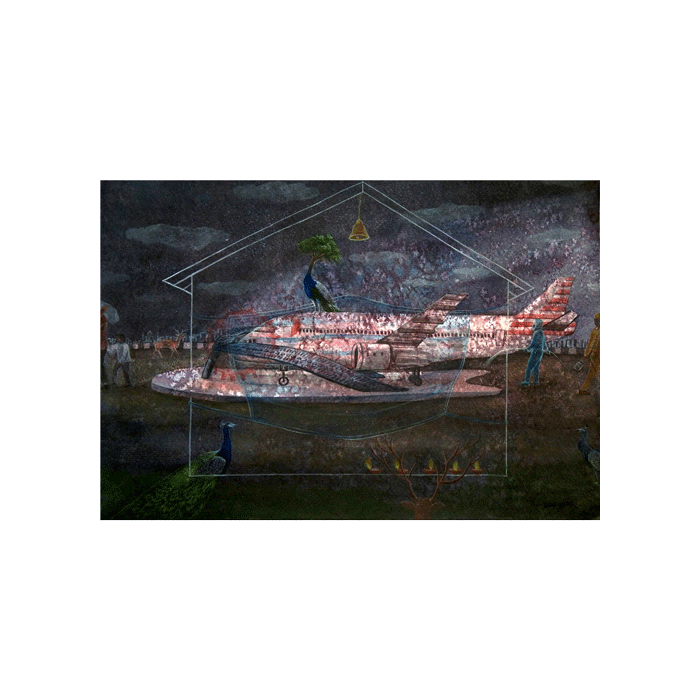 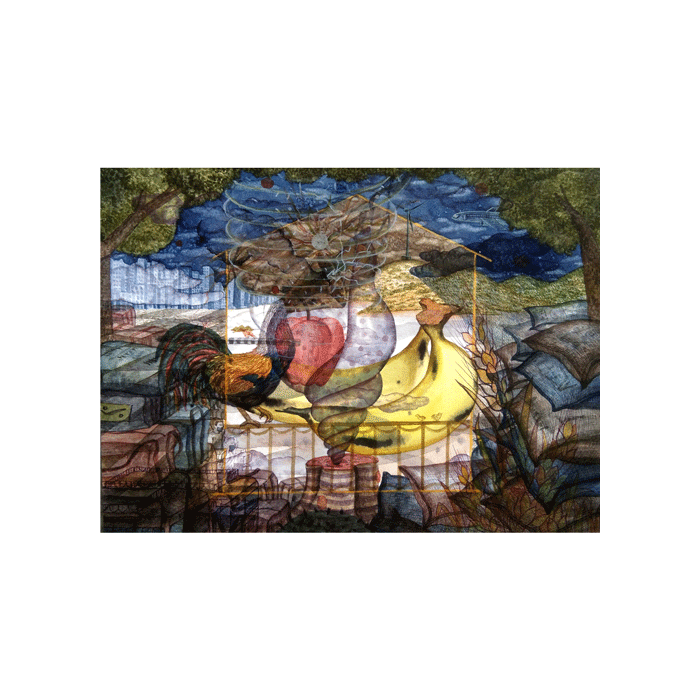 Abhilasha Singh: The ebb and flow of underwater life

Living in Lucknow for eight years, the River Gomti and its interaction with the urban settlement has proved to be an incredible inspiration for artist Abhilasha Singh. Themes of continuous changes in nature in contemporary times, the increasing harming of the environment, its effect on living beings, and most specifically, fluctuating levels of water, all filter into her works in the most evocative ways, using watercolours, acrylic and pen ink on paper and canvas. Singh professes that the hue and the density of oil and acrylic colours, and the inherent softness of watercolours both work well to depict this theme that she favours. What is prominent in many of her works is the artistic usage of motifs like fish, turtles, frogs, butterflies, trees and birds, besides the slow decrease of water, like emptying emotions, as it dwindles in our world. For example, the artwork titled ‘Fish at Water Side-2’ is at once beautifully wrought and utterly disturbing. The shimmering sands with a gossamer patina of waves and surf over them form the background, and at the centrepiece is a rubber or plastic chappal washed up ashore, half broken and tangled and clearly in unusable disrepair. Attached to it is a disembodied fin — what could be interpreted as the remains of a being that was destroyed by this detritus, or even the synonymity now that oceanic trash has developed with the denizens of the marine world, and how the two elements have become tragically inseparable due to selfish human excesses. Another work, ‘Fish in the Jar’ could be described as more esoteric in meaning. Here we see two massive alligators wrapped against one another as if in a fierce yet graceful dance or battle, emerging skywards from dark and murky, plastic bag-filled waters below, with a red, rocky quarry or wall-like structure in the backdrop indicating natural climes. Atop them, like a crown, is a suspended turtle, as if thrown upwards or hovering magically; and perched on its back is an artificial glass jar, with a lone fish in it, also hovering. One could interpret a disruption in the cycles of prey and predator as part of this interesting composition. 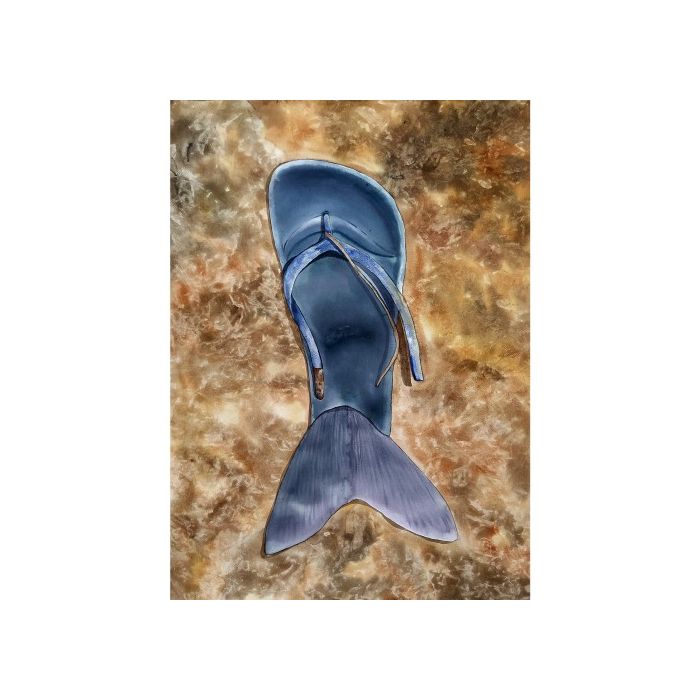 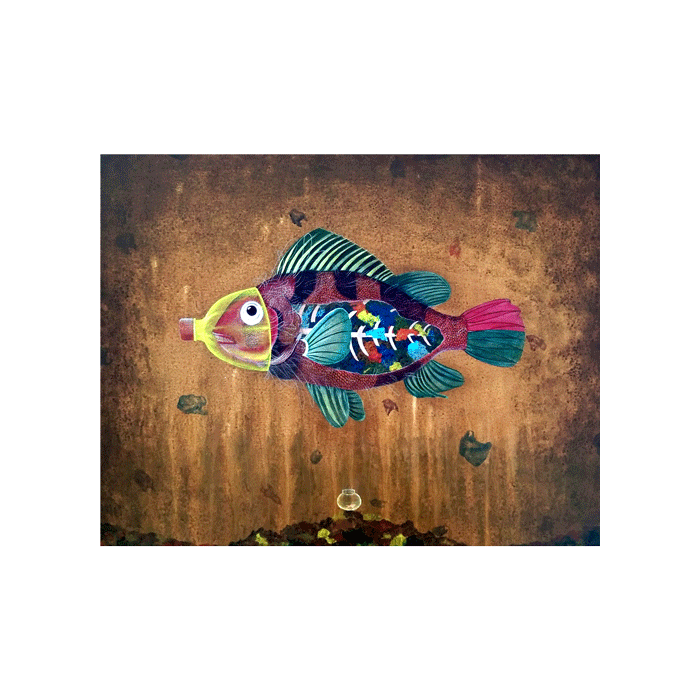 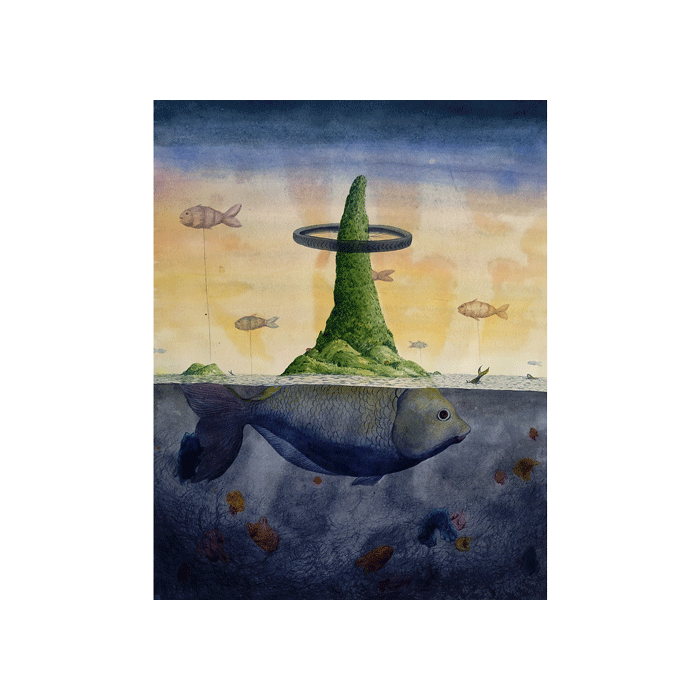 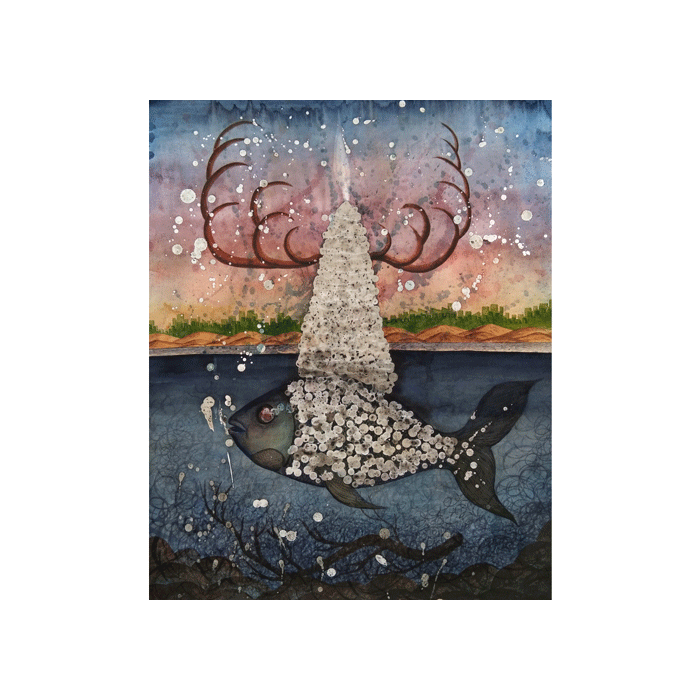 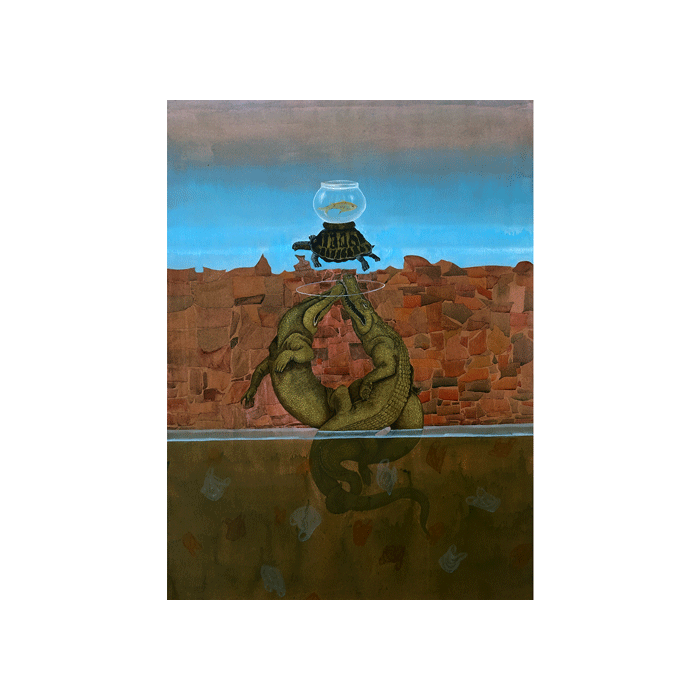 Vikash Saiyal: A journey into interior depths for exterior manifestations

While myriad inspirations may come to the artist from the world that surrounds them, many of them also tend to plumb deep into their own minds, memories and experiences to find meaning in the creations that they put out into the world. One such example is artist Vikash Saiyal, who admits to seeking spiritual affinity between the exterior and interior world to manifest in his artworks. In this vein, his explorations also lead him to probing the souls of his loved ones, his own childhood, and the passage of time in a broader sense — but at the same time, he cautions that his art is neither an explanation nor an endeavour to find answers, but is simply and expression of life. Vikash harnesses transfer colours, light shadow colours, canvases and mixed media to produce vibrant canvases, which often find anthropomorphic forms as part of the composition. One example of this is ‘Love and pain’, which is a visceral, eerie depiction of the eponymous emotions. It shows the disembodied figure of a person, with their innards visible represented artistically. The head is obscured by dark matter, with a tree like structure or synapse springing from its base and holding in a womb like formation a foetus, which is lying still in shadow; the person’s spine turns red and races down below into the chest, where a naked figure, awash in scarlet, lies curled up in agony, surrounded by the waxing and waning moon; below, in the belly, is another disembodied feminine figure without a face, sprouting blood-washed branches from her chest and disappearing into a skirt of shimmering red and pink droplets. ‘Thunderstorm’ is a slightly variant depiction. Here at the heart lies a bottle, perhaps a salve of spirits. It is surrounded by intricate and eye-catching patterns that resemble our life-blood and nervous synapses, the minutiae that make up the human existence. They surround the bottle at the heart of the frame and entwine closely with one another and the object, as if drawing life force to survive from within it. 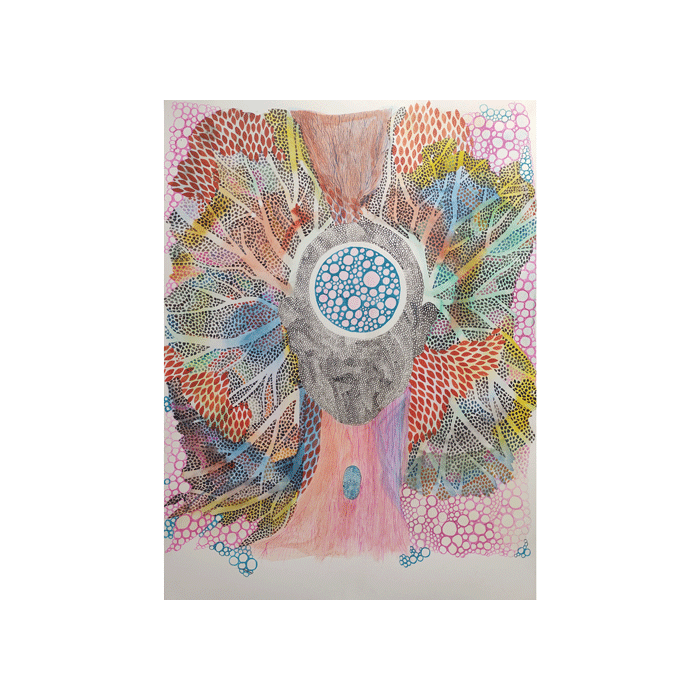 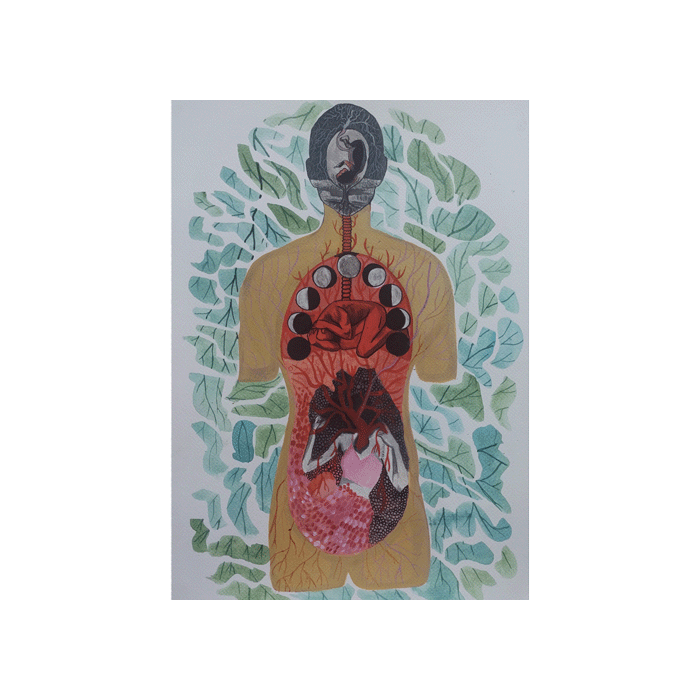 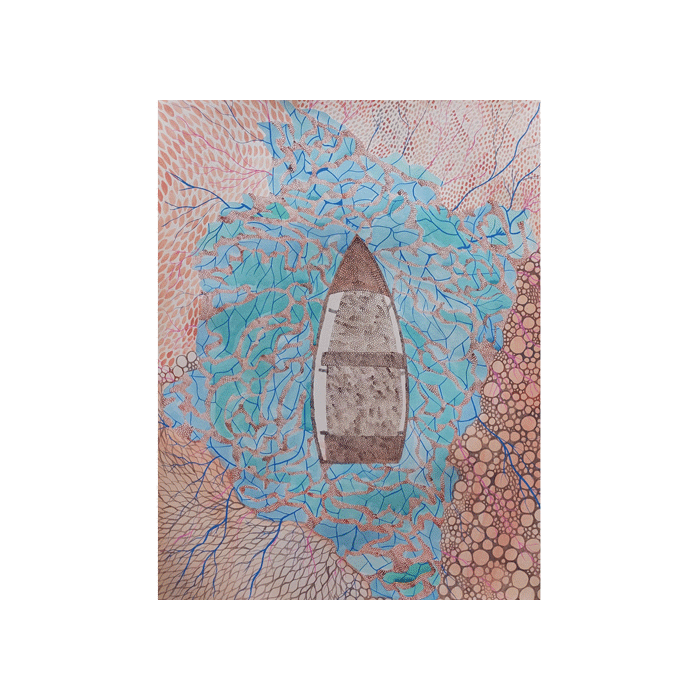 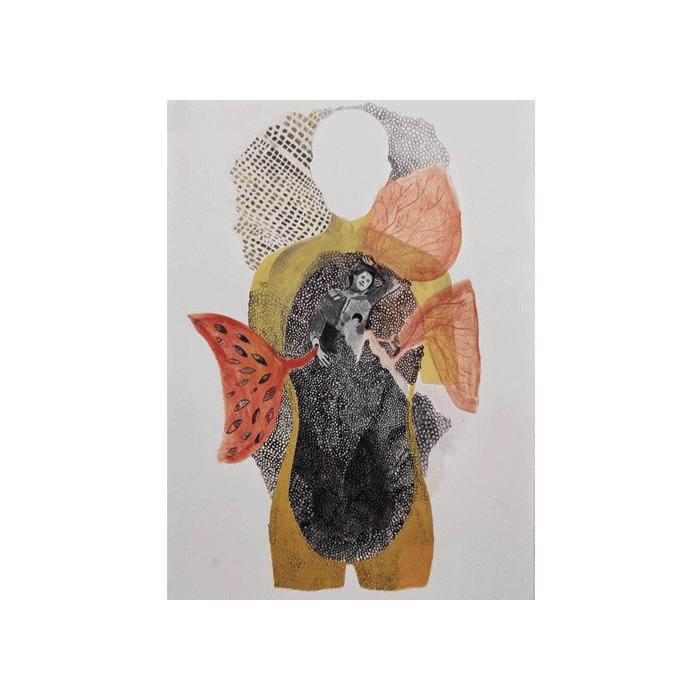 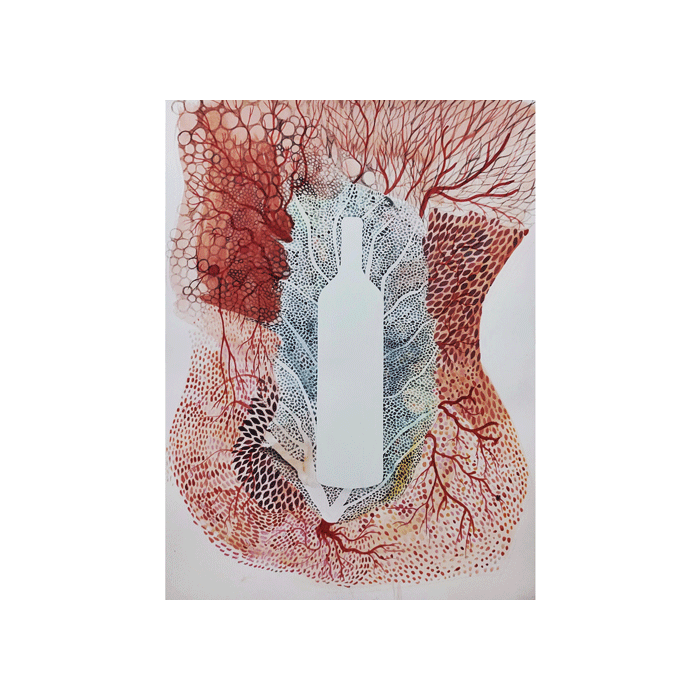 Art Of The Day: Burning Gaze

Artist Ramesh Garawad feels the pull to create something that captures the feelings of the human faces that surround him. This inspiration is reflected in the oil on canvas piece ‘Univesal’ (30x30 inches), where hues of burnt sienna, ochre yellow and raw umber come to life in the form of an eerie circle of empty-eyed faces surrounding a presumably supine object or subject, even as a searing light as bright as the sun burns in the middle, right on top.