Abhijit Nigade: Manifesting the twisted nature of the mind

Art for Abhijit Nigade is a kind of self-professed intense self-discovery, or a romancing of one’s inner soul. His special curiosity for the mysteries of the human mind manifests in every artwork that he puts across, dabbling in the mediums of lithography and etching, while also sculpting forms and figurines with wood, metal, terracotta, cloth and M-seal. This yields three-dimensional and on-canvas work that both piques curiosity and generates dialogue. Thus, while delving into questions that arise from observing people around him, Abhijit produces pieces that are complex, chaotic, and yet balanced, celebrating the human form enmeshed with abstract symmetries, sometimes seemingly inspired by a hint of Cubism. His series of artworks titled ‘Portrait of a Distressed Person’ are haunting charcoal sketches that bring together intricate confluences, an abstract tone, and a certain geometry that surprises you through the chaos. In another black-and-white painting, the aura comes across as hedonistic and almost bleak, and draws the viewer in entirely. His fascinating sculpted figurines entitled ‘Blind’, ‘Head’, ‘Pointing Towards’ and more are full of nuances that keep the observer continually rediscovering the artist’s potential. 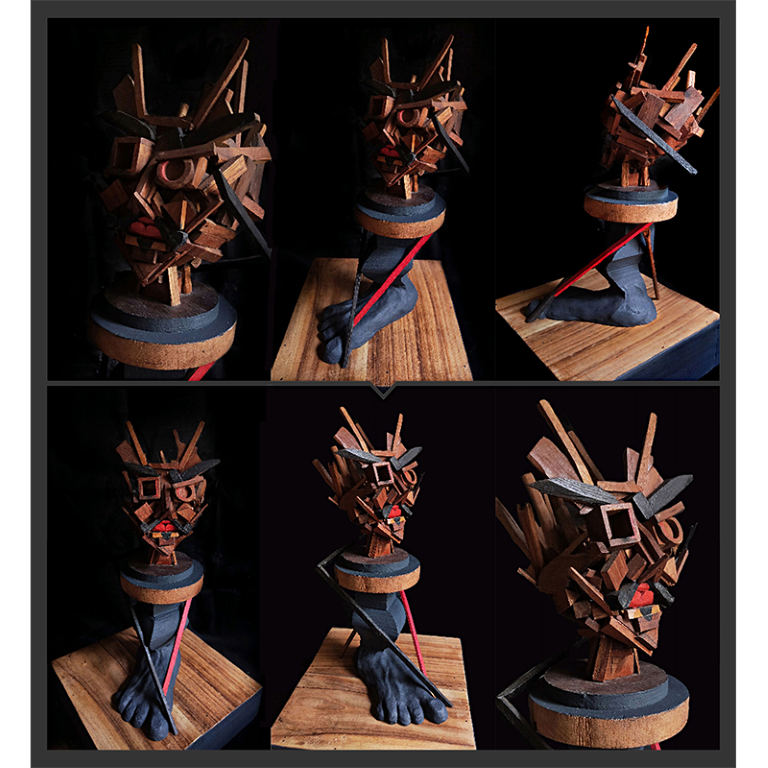 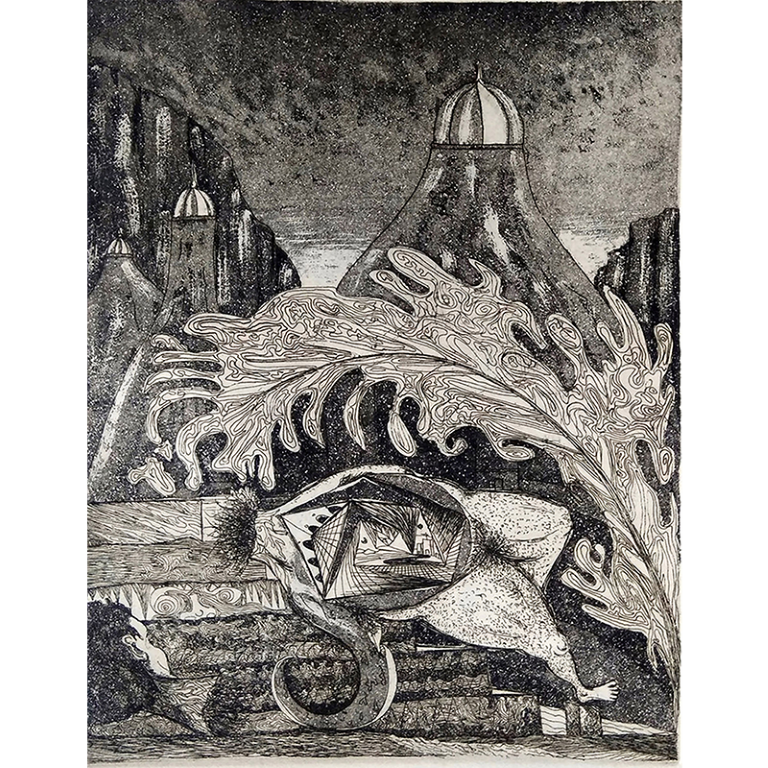 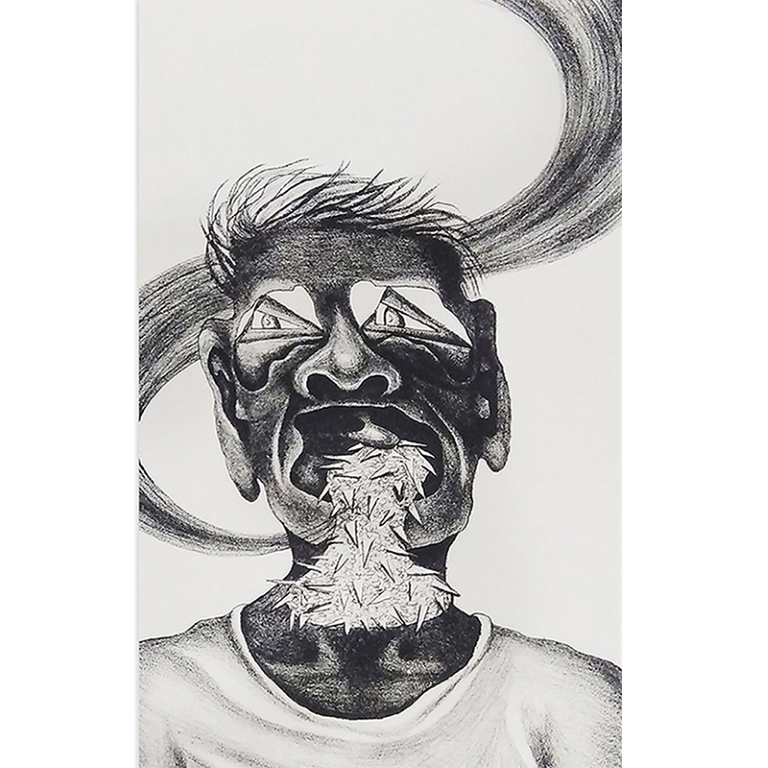 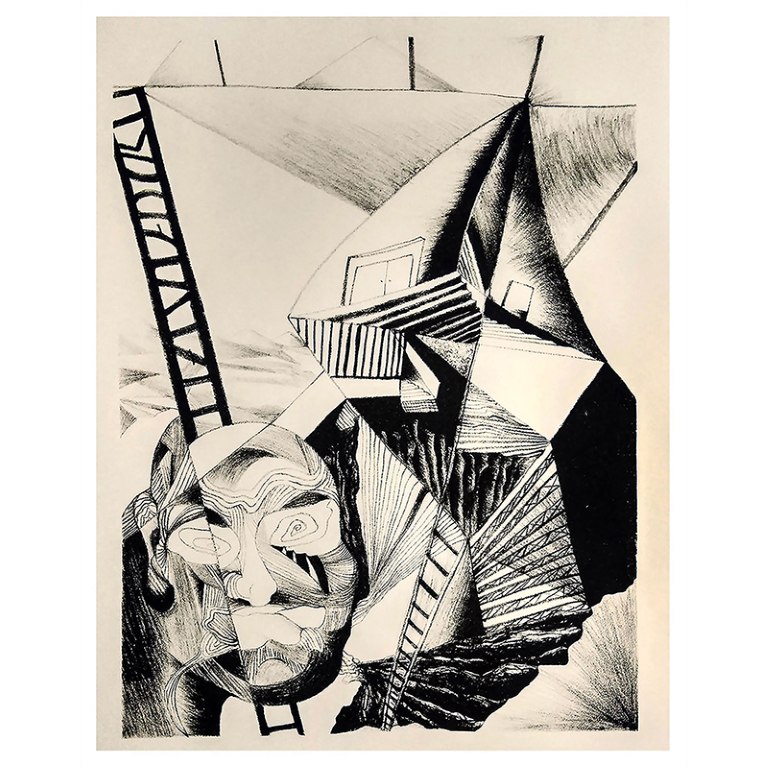 The delightfully Indian pieces of art created by Dhanu Prasad are colourful, bright, and instantly reminiscent of traditional locations, people and events. In fact, the artist professes that his inspiration stems from visits to a multitude of religiously significant locations (Haridwar, Rishikesh, the Kumbh Mela, Char Dham Yatra, etc.), where his focus fell not on the hordes of expected visiting worshippers, but the devout demographic that permanently populates such places — fortune tellers, pandits, fakirs, yogis and more. Dhanu works with acrylic on paper or canvas, as well as charcoal and ink/pen drawings. There are several quintessentially identifiable motifs and elements in his pieces for a large swathe of desi audiences — the distinctive embroideries on the saris of the women, the drape of dhotis, gamchas, headdresses, a kalash in hand for many of his characters, minstrels with musical instruments, hutments in the background that indicate a rural atmosphere, and more. 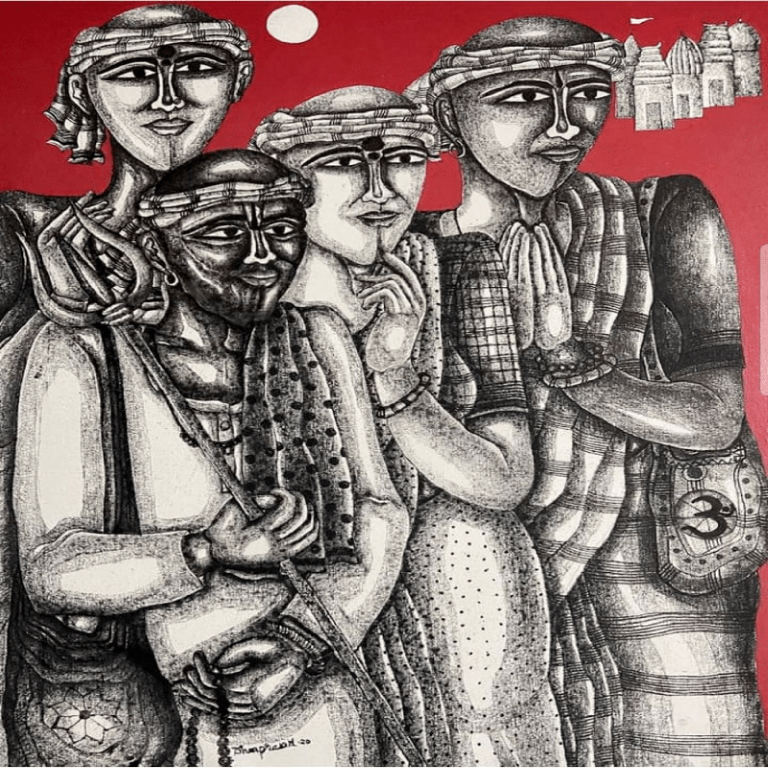 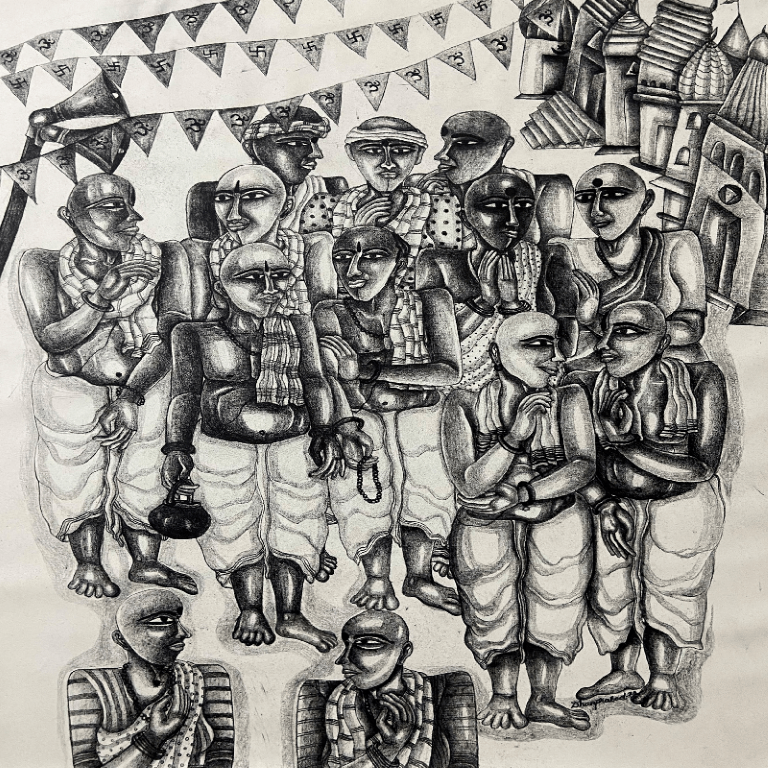 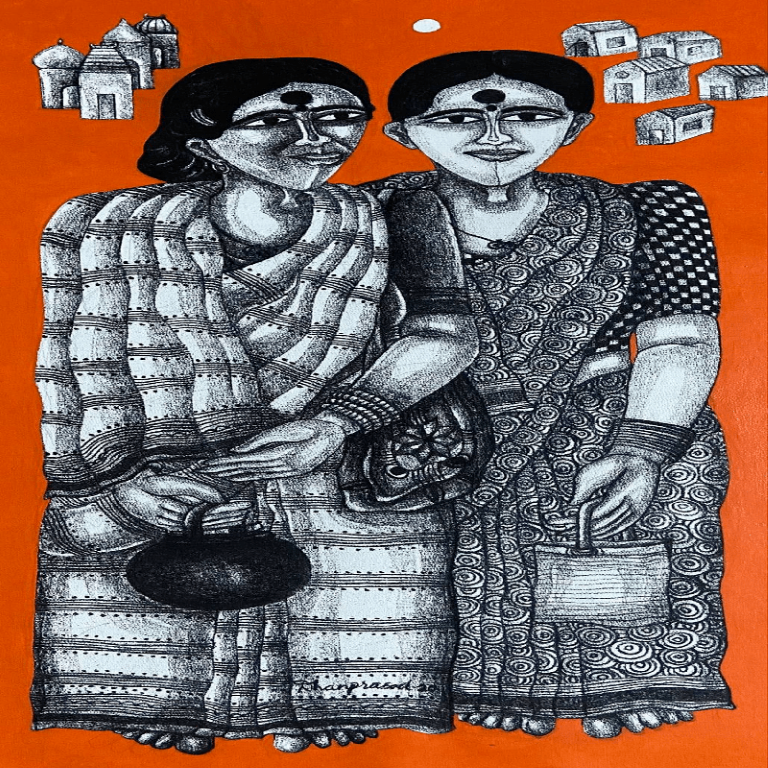 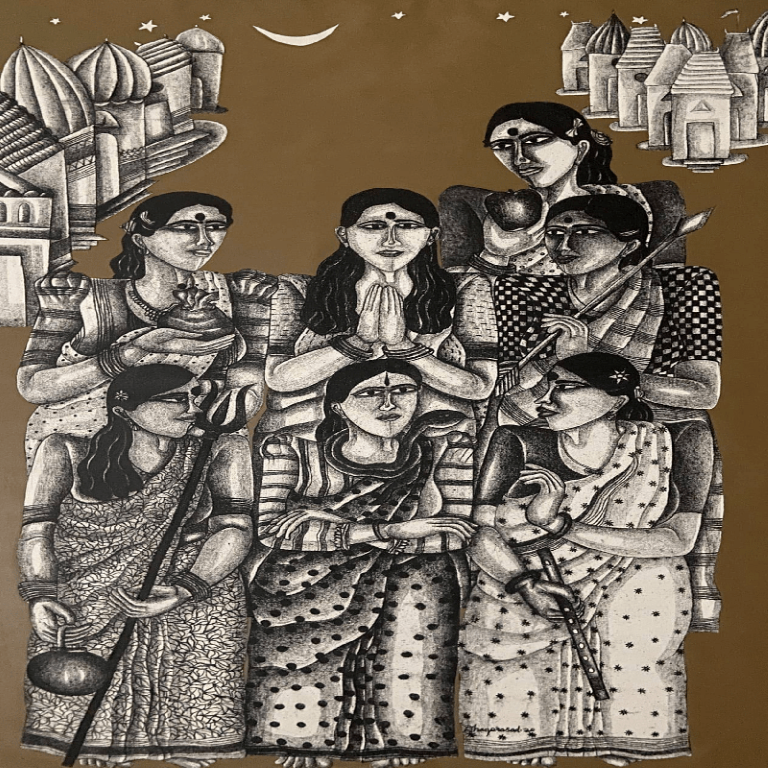 Jayasree Ghosh: A jungle of thoughts in every frame

As an artist, Jayasree Ghosh has a unique and incredibly intimate perspective of nature, which shows up prominently in the pieces she creates. Having grown up near a forest, the connection to it is clear in her paintings, be it in the form of flora or fauna. The beauty and dynamic presence of the jungle is almost like a primary inspiration for her art, she herself admits, and Jayashree also explores the fact that the same natural phenomena could bring out diametrically different responses in people — such as a thunderstorm sparking both ecstasy and panic. The mediums she uses include etching, aquatint and woodcut, and the artwork has an almost child-like innocence and joy in every frame — until one plumbs into its depths. For instance, in the prominently deep-green hued artwork ‘Where Am I’, the artist has a woman’s figure in the foreground displaying some thoughtfulness, while a scene unfolds behind her almost as if on a terrace tucked away in some forest villa, with a hornbill perched atop, monkey frolicking around, and tribal art motifs adorning some of the objects in the image. In the painting titled ‘Dinner’, what you see is even simpler — a canvas awash with blue, enclosing the outline of a dinner table, on which are perched two plates carrying a live rooster and cat, besides cutlery to tuck in. Observing the technique and plumbing into the symbolism of Ghosh’s work make for an experience that speaks volumes of her vision. 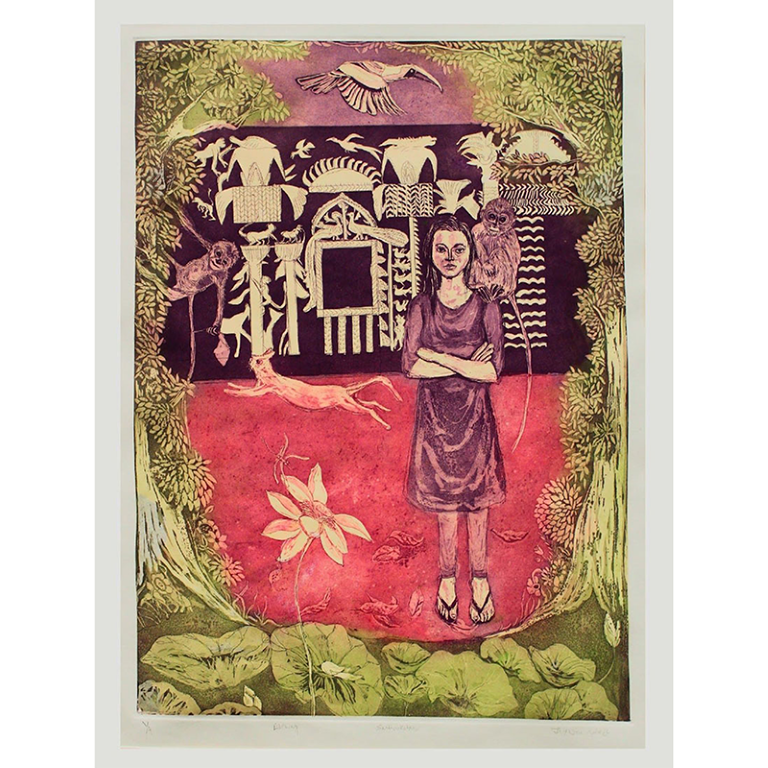 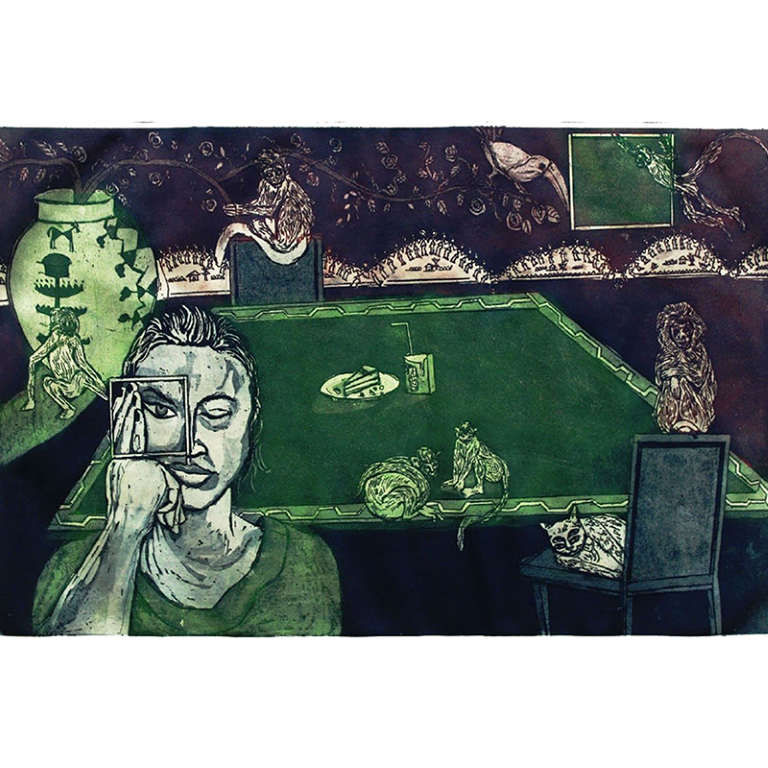 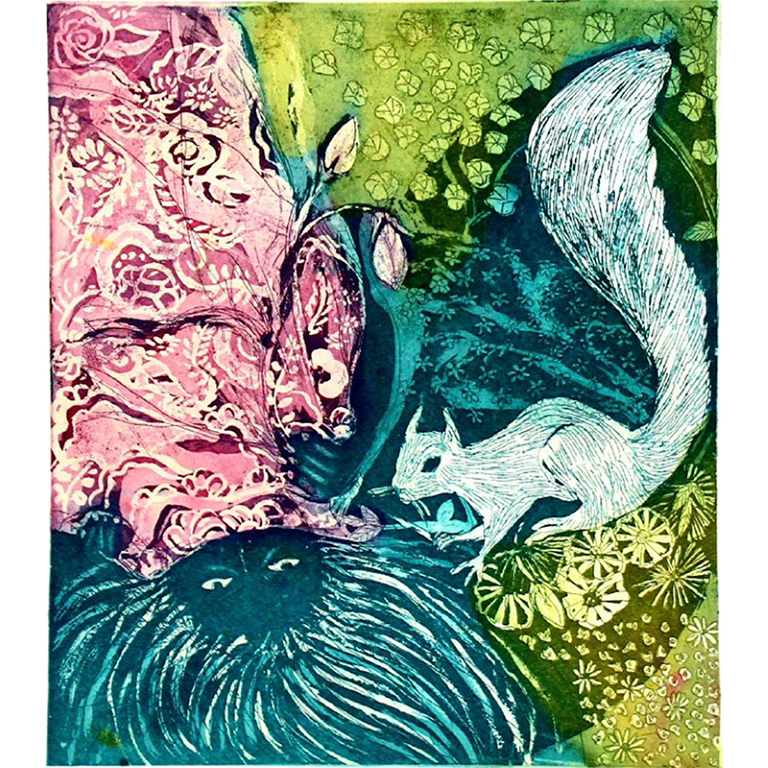 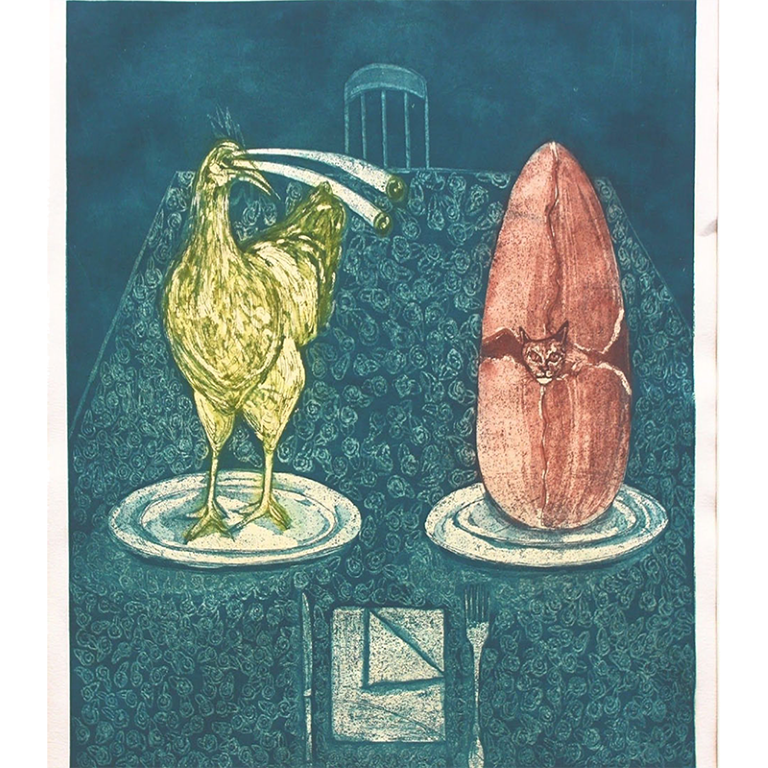 One of the most fascinating qualities of Monika Thesiya’s art is that she makes her own paper to paint on — an aspect that (quite literally) adds dimensions to her work. Sticking varied paper types of the instinctively chosen quality onto one another, layer by layer, she composes thicker canvases that let her create her own effects, textures, and style. Monika believes that her paintings attempt to balance color and sensitivity through overlapping forms, illustrations, and transparencies. She also experiments with burning effects and varying shades, and aspires to keep improving her art. In the piece titled ‘MSU’, the canvas gives one almost the impression of ageing parchment. There is something cartographic in nature about the rendering, with a delicate eye for architecture pepped with sudden knots and crosses; on the flip side, showcasing her flexibility, another untitled artwork shows what could be described as a ‘stairway to heaven’, standing out in its golden-bronze hue against a bright blue, clear sky, towering over a shrouded town below that is either enveloped by fog or shimmering in the reflection of it. 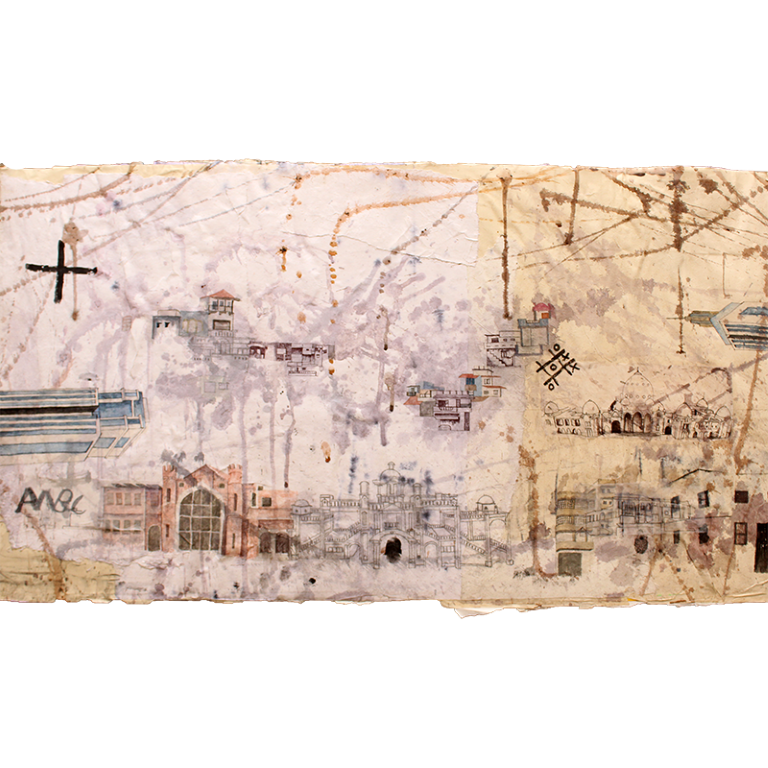 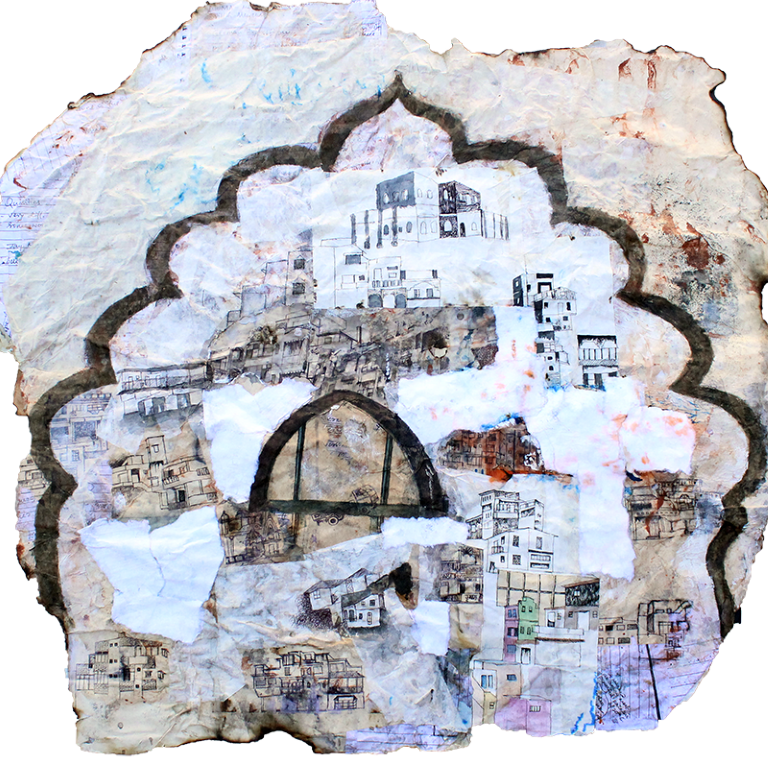 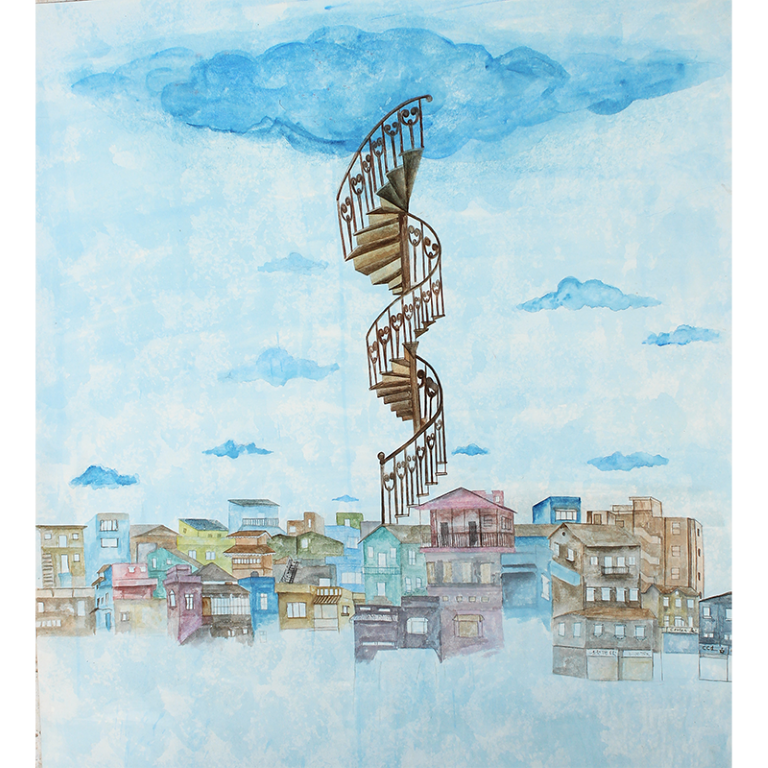 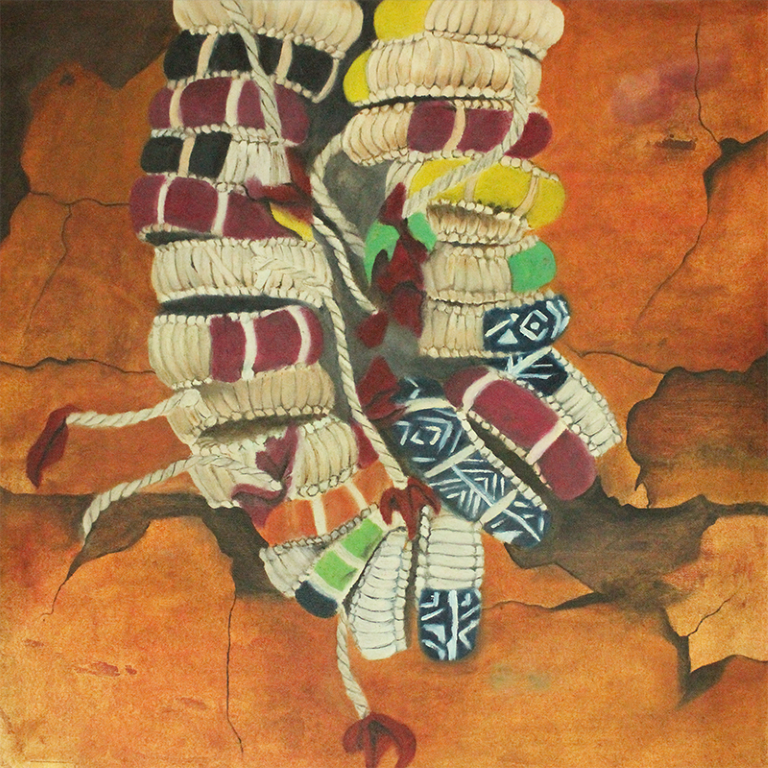