This week, our artists play with the senses in myriad ways

Vijaya Chauhan: A special touch with an unseen script

From the outset, artist Vijaya Chauhan professes to being attracted to the mystery and transformative power of Braille, with her attention primarily focused on the beauty of touch and experience of this knowledge existing in the language used by the visually challenged. Her art uses unusual elements of expression that specially abled persons may use to learn and communicate. Vijaya shares that the assemblage of Braille words in terracotta form utilises specific patterns and hidden sentences, combining to form an essay in each artwork. From there, she feels each sculptural piece gets its own identity, like a specific word, some depicting a color, and others sentences, with the medium producing a natural, raw and earthy impression of what she wishes to convey. An evocative example of her oeuvre is ‘Unread Sentence’, made using terracotta, steel, jute and wood. Vijaya’s sculpture is imbued with the textural magic of multiple materials, and hangs together like a pastiche of post-it notes or patches, sown together meticulously carrying unique and hidden messages on each “page”, as it were. For one familiar with Braille, this art work is a wonderland — and creates an uplifting example of art that remains accessible to all, whether specially abled or not. Another take on a similar theme is ‘Innovative eye II’, wherein terracotta, steel, jute and wood elements are used. Disposable bowls of recylable material are tied and sown together into a form reminiscent of a geographical outline or even a beehive. Each bowl is carefully studded with pearls that depict something in Braille — once more, those hidden and yet plainly available messages for those who care enough to learn how to read them. 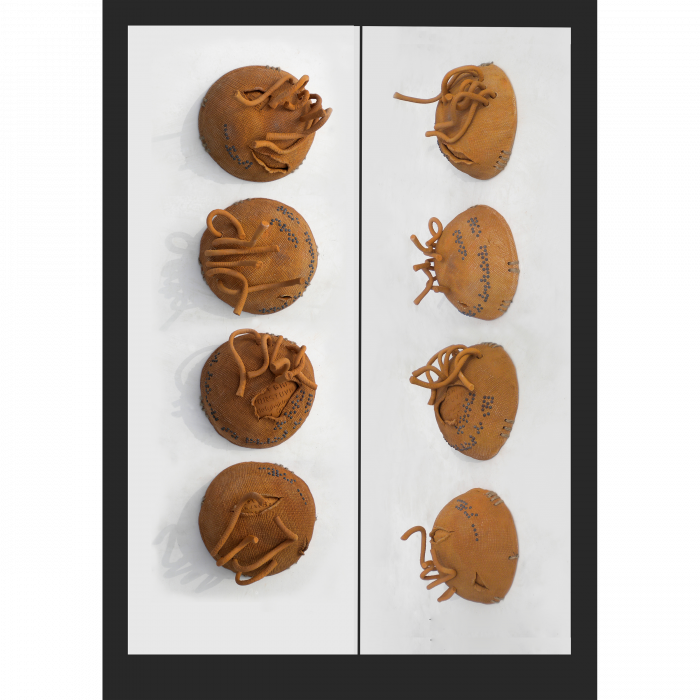 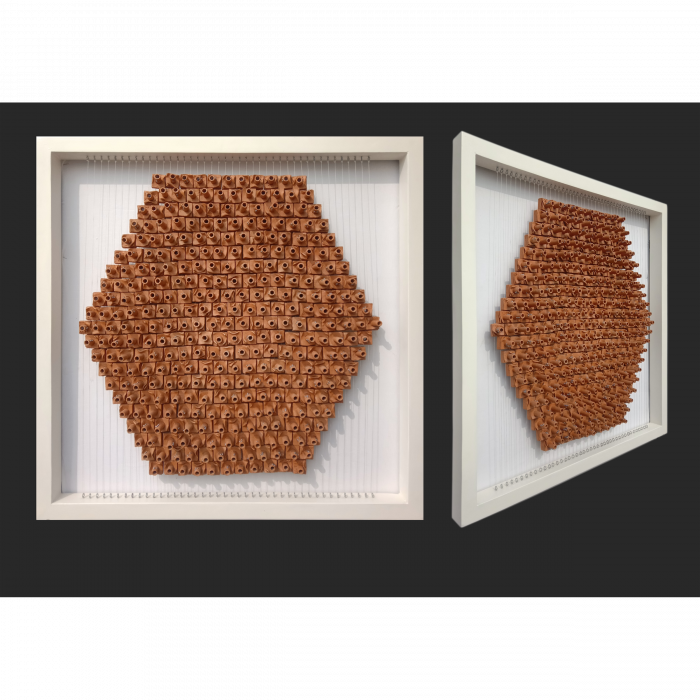 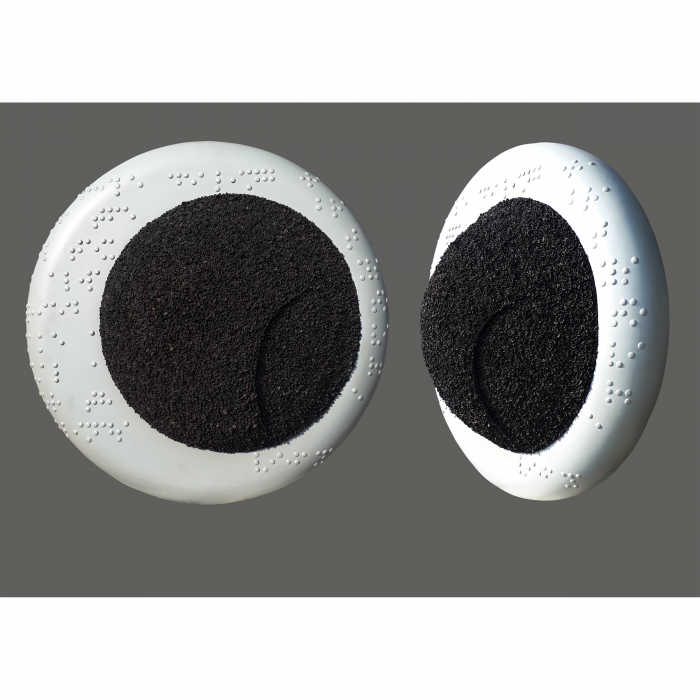 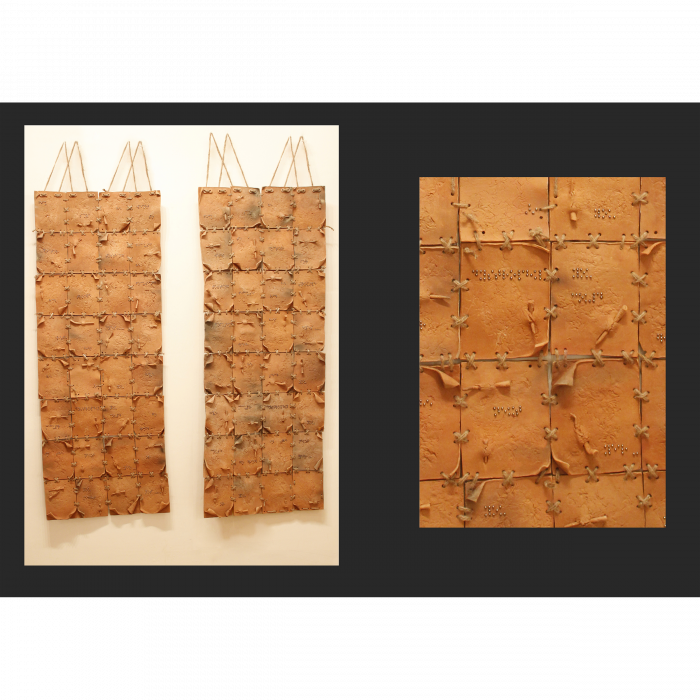 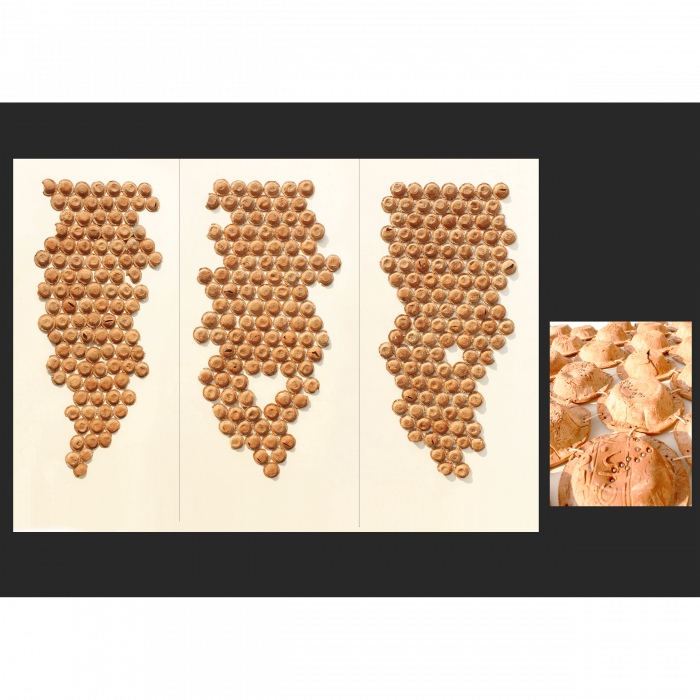 There is a feeling of quietude that is instantaneous when one gazes upon the works created by artist Tufan Pramanik. One feels an innate sense of contemplation and introspection, both of which give rise to the absolutely incredible amount of attention to detail that the artist manages to manifest in his work. And, another hallmark of his skill is the dense and complex interplay of light and dark that he evokes quite perfectly, giving rise to paintings so utterly realistic that one may be fooled into thinking of them as photographs. This is done using mediums as ubiquitous as charcoal and pen on paper, acrylic on canvas and iron dust print on paper boards, all of which stands as a true testament to his talent. The artist explains that his constant travels between rural and urban domains in his days as a student led to long swathes of times spent with the self — many twilight hours eked out in silent thought, observing elements and people around him, in a way also anthropomorphizing the former. ‘She Is Old’ is an example of this. The artist’s ultimately displays what looks like an old metal surface, studded with rust, out-of-work fixtures, scratches, old writing, stamps, torn and stuck decaying bills — basically relics of a time gone by, which immediately bring in the dimension of age of the subject into the viewer’s gaze and analysis. In Game Of 2020, Tufan melds the realistic and the impossible to produce a symbolic artwork, its interpretation left to us. A long and dappled stairway presents itself in a dark corridor, playing tricks with the eye in that it could either be leading upwards or downwards into a door that leads out into light (seemingly). Popping up into the frame almost startlingly is a set of hands with thread weaved through the fingers, as one does when playing a trapping game — a contemplation, perhaps, of walking into uncertainty, with a hint of trouble afoot. 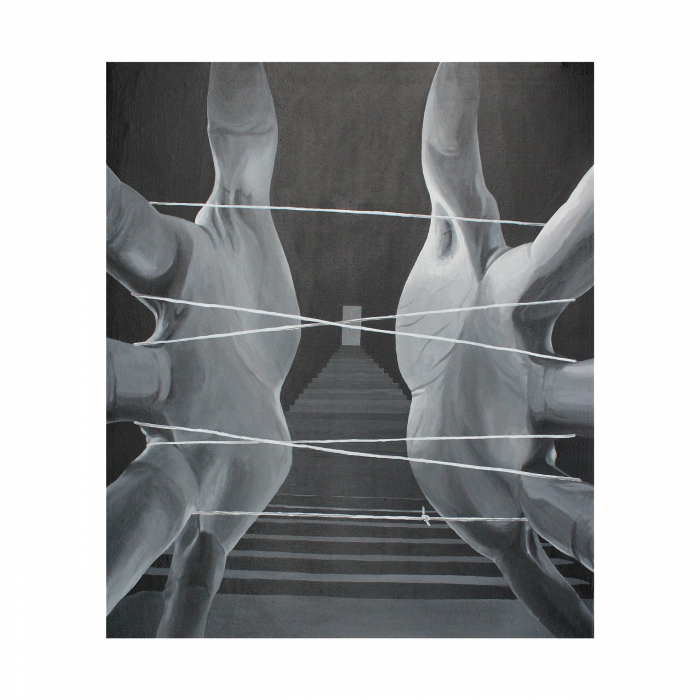 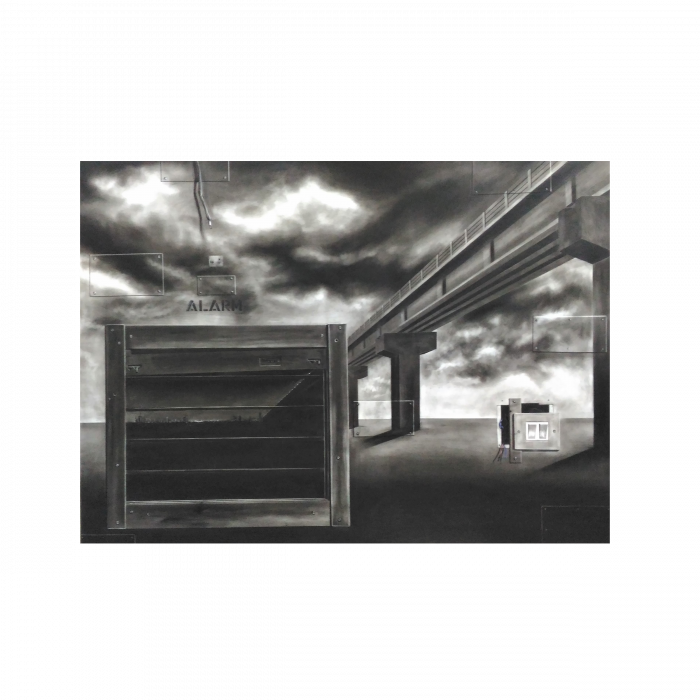 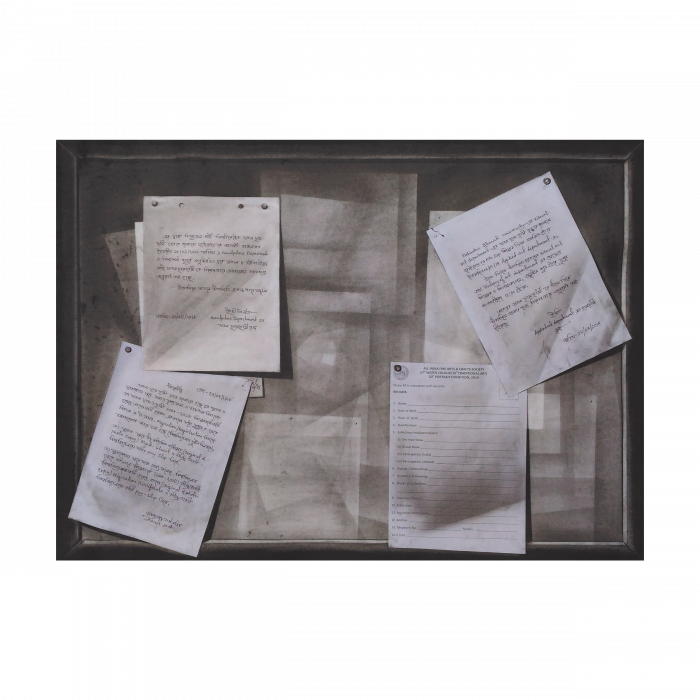 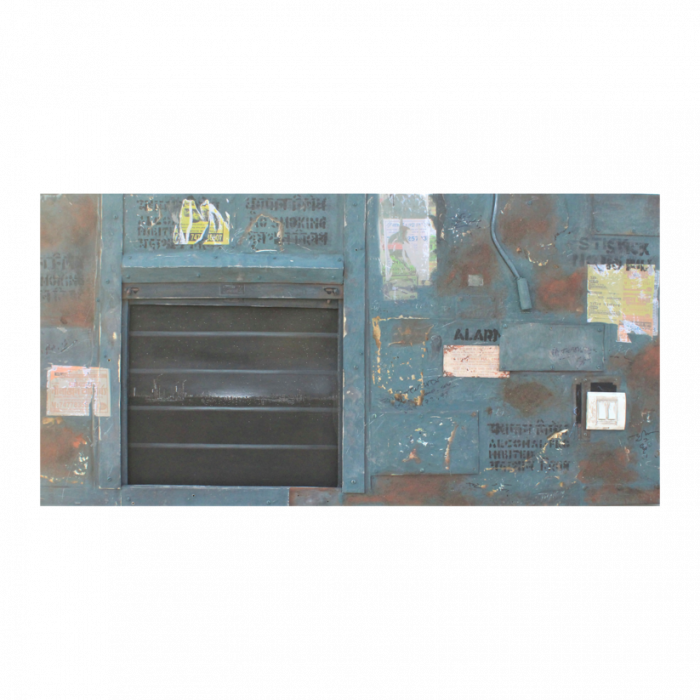 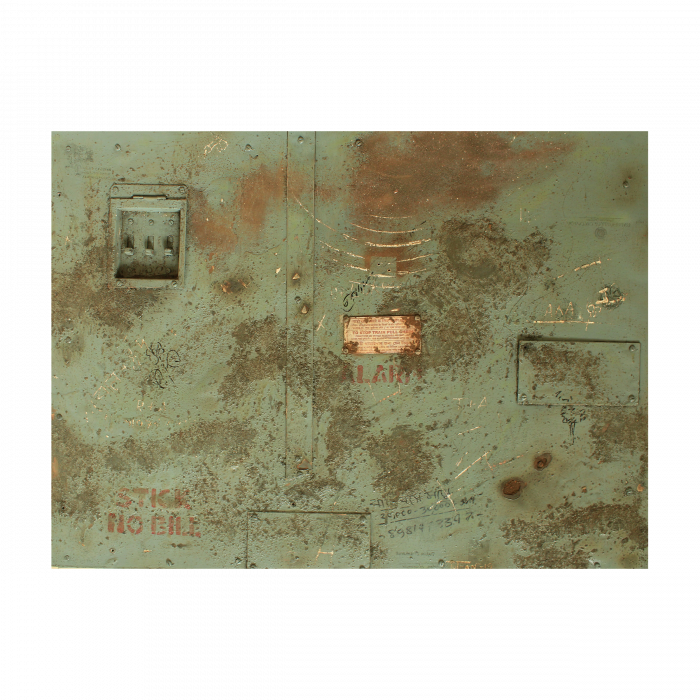 Sreyashi Saha: Themes of the city evoked in prints on paper pulp

The art of printmaking is a delight of flexibility, allowing the artist to embrace an infinite diversity of surfaces upon which they can present their art — which in turn can take more forms than the mind can enumerate. This is a facet of artistry that has been embraced by Kolkata-based artist Sreyashi Saha as well — in that she effectively utilises paper pulp as a favoured medium to present her art, professing that she enjoys its texture, softness and malleability to handling, which allows her to work playfully while expressing something meaningful nonetheless. When it comes to the themes she projects onto this canvas, Sreyashi is quite inspired by her city and surroundings, distilling a view of multitudinous focal points — objects, places, people — into her artworks. Much of this also takes on an autobiographical perspective. This could be visualized in the piece titled ‘Me & my surroundings II’. Here, using etching with aquatint, Sreyashi aptly juxtaposes an interplay of light and shadow, while drawing a compendium of varied lamps and lanterns. The colour is monochromatic, and yet the diversity of patterns and shading creates a sense of complexity and aesthetic value. In ‘Searching’, on the other hand, the artist uses woodcut on paper pulp. What remains the same is a central object that is then rendered in multiple variations. One could assume that in this case, it is gadgetry. From an older reel camera to a digital one, an alarm clock, a transistor radio, and more, each takes on a different combination of yellow-green hues. What they all do have in common is that the elements of a city — in this case, probably Kolkata — are depicted in myriad ways, be it the churn of traffic, or a bustling skyline. 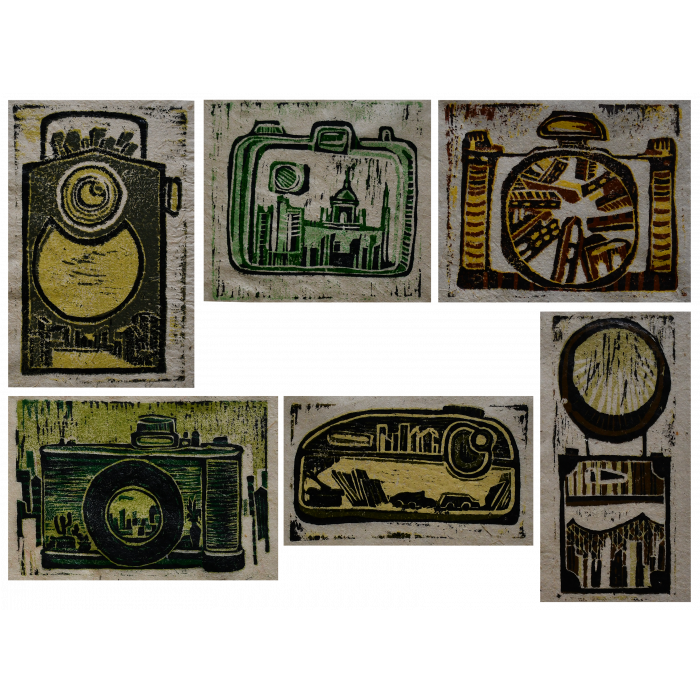 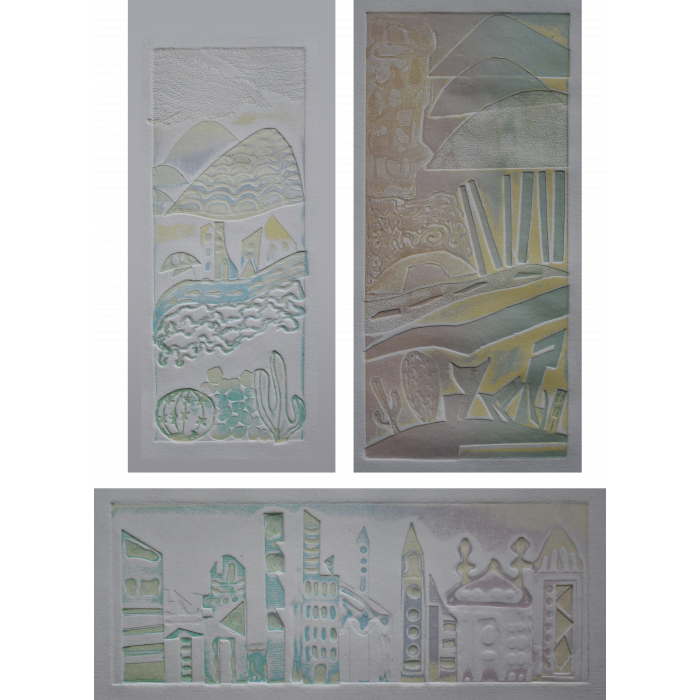 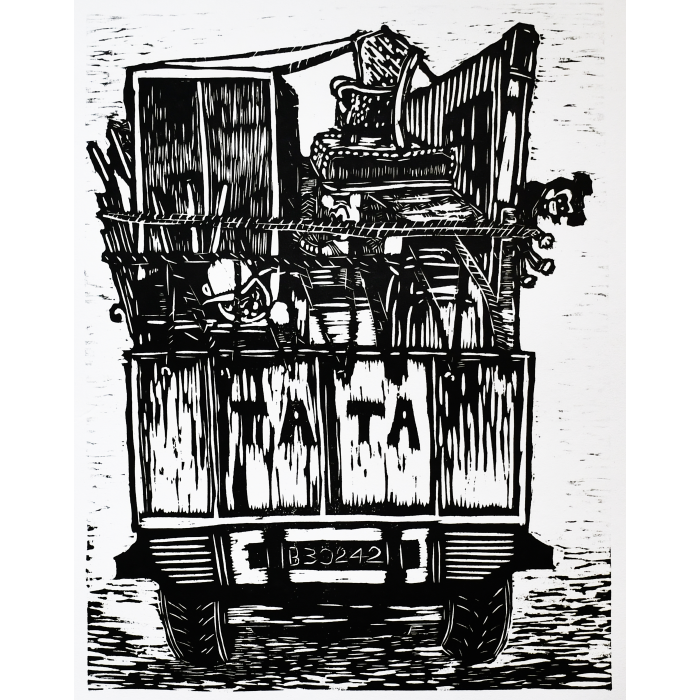 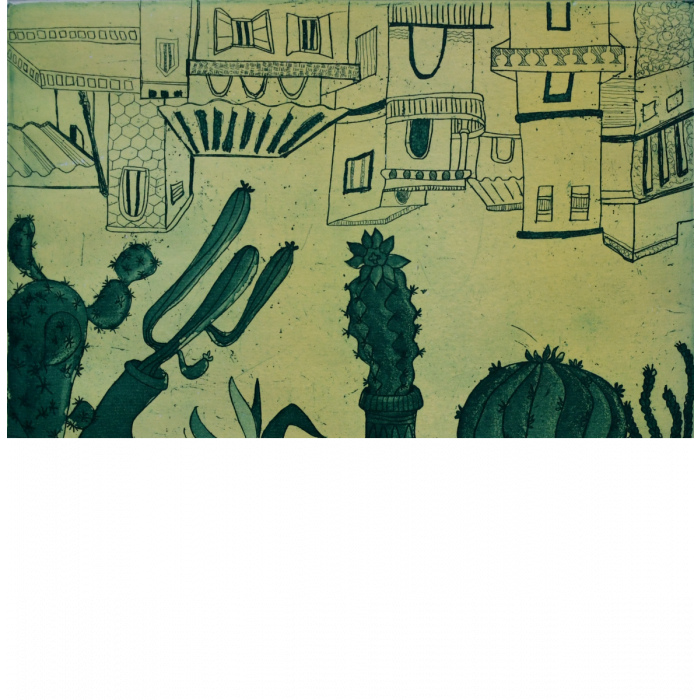 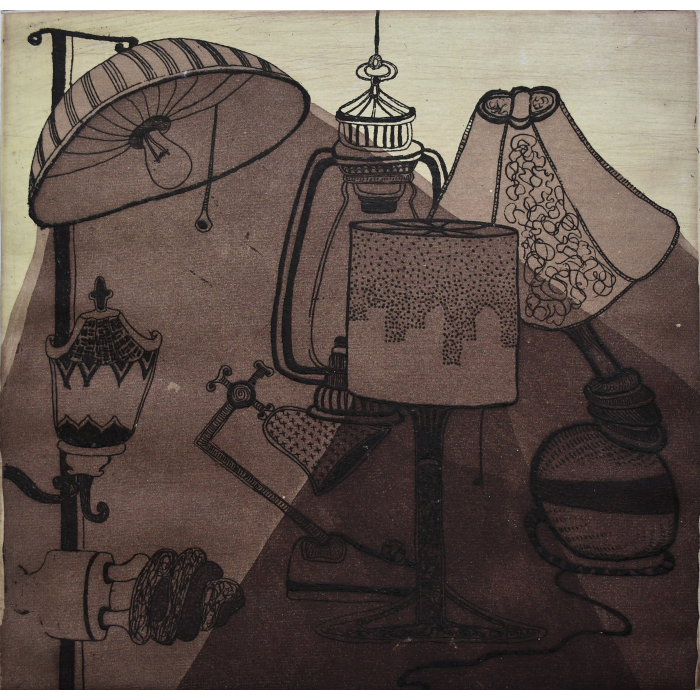 Intimacy and sensuality may be one of the most subjective topics to be depicted in art. Perspectives vary, and so do the skills, techniques and vision of the artists putting holding forth on the theme. Artist Sachin Nimbalkar is enthused by exploring the bent of the adolescent mind in a conservative setting, wherein there is a looming question of whether society at large considers it permissible to interact with objects of attraction. His works also cast the gaze upon the strong symbolic connection between physical nudity and intellectual nudity. He manages to portray erotica in a fascinating manner, wielding the potential of mixed media and using a setting that is reminiscent of Mughal miniatures with broader and bolder brushstrokes, and hints of surreal psychedelia and modern art thrown into the mix. If we look at the piece titled ‘Samvad 5’, we see an example of this amalgam, Nimbalkar uses his favoured circular frame and depicts a centuries-old couple engaged in coitus as if viewed voyeuristically through a stained glass window, with a burst of translucent colours set in large tranches. As shades of red and yellow meld, in the foreground is a somewhat menacing and yet benign figure of a bearded adult man, wielding both a somnolent expression of pleasure and holding a fan — one could conjecture that he is keeping the couple well-ventilated while they are otherwise occupied. In ‘Samvad 10’, we step once again into the workings of the mind with regards to the topic of physical, mental and emotional attraction — here, the open mind of what looks like a young boy is topped by a figurine of a woman in the nude, faces and patterns meld into one another, and the face of a goat also stands poised in the mix, with colours juxtaposing through all these forms once again in a stained glass-like translucent format. 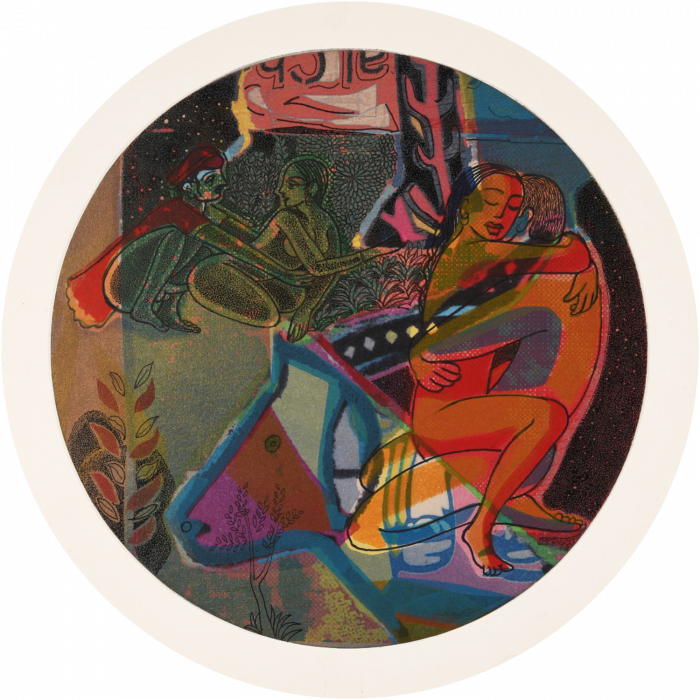 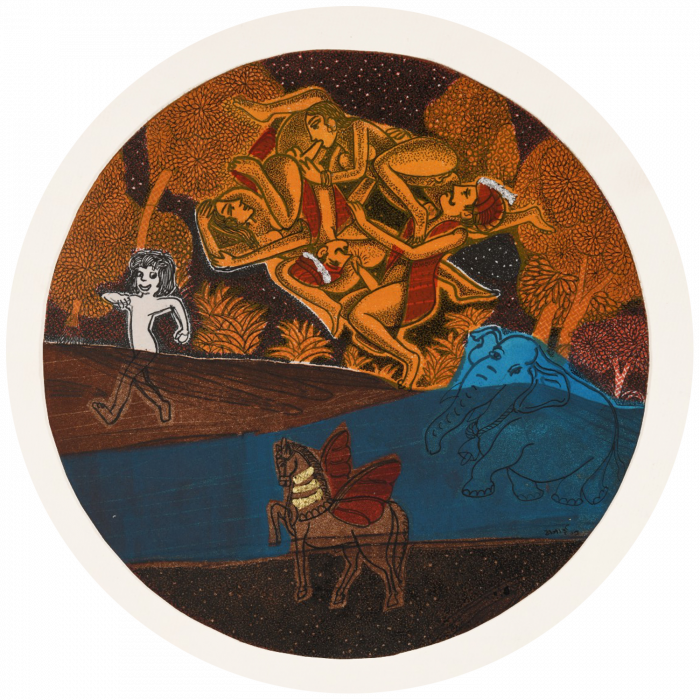 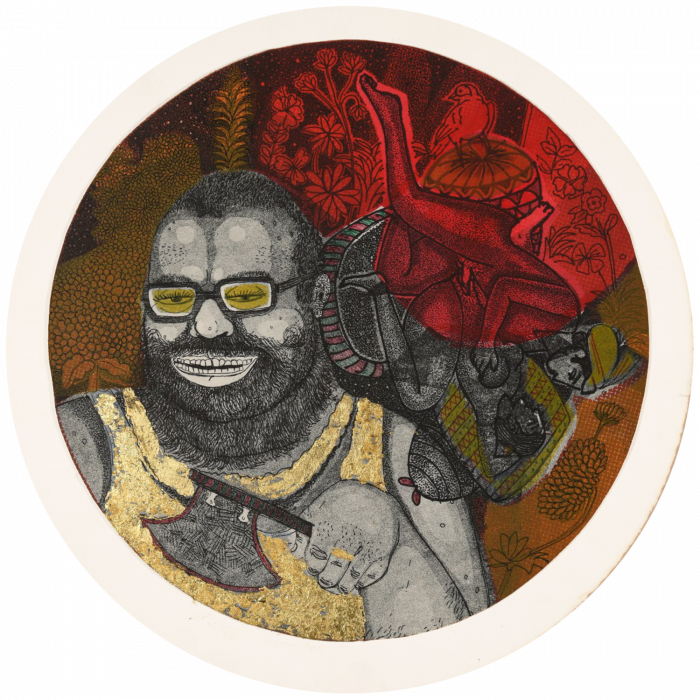 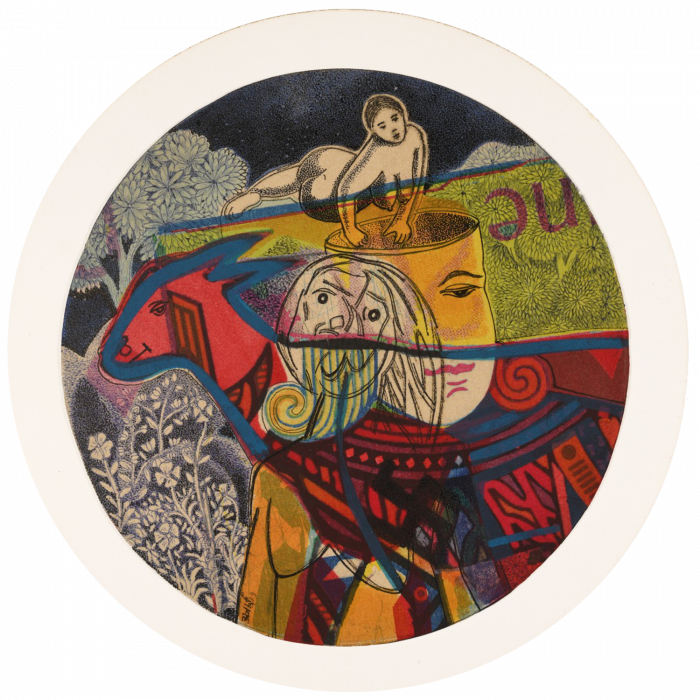 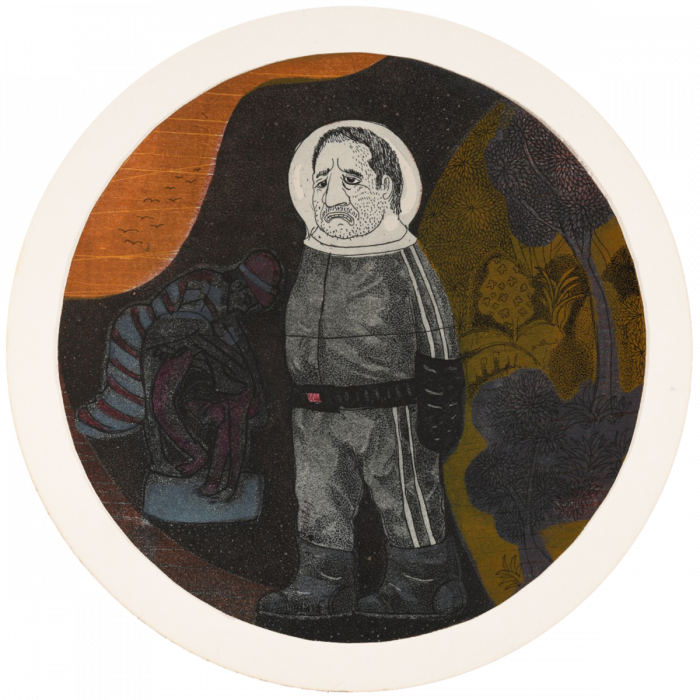