by adminin On This Daytags: art, artist, on this day

One of the masters of the Sotatsu-Koetsu school of decorative painting, Ogata Korin died on this day in June 2, 1716. He was famous for his screen paintings, lacquer work, textile designs and particularly for his byobu folding screens, such as Irises and Red and White Plum Blossoms. 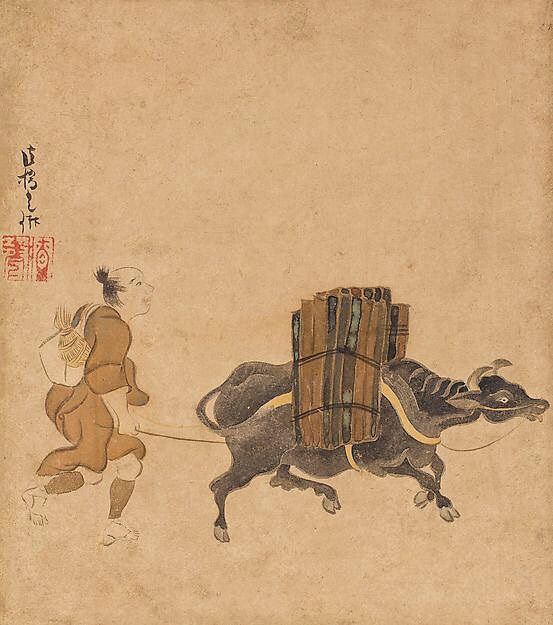 He was born on 1658 in Kyoto. Members of his family were art lovers, his father Ogata Soken was a noted calligrapher in the style of Koetsu and his younger brother was a celebrated potter and painter. He studied under Yamamoto Soken, Kamo Tsunenobu and Sumiyoshi Gukei of the Kano School, but most of his art works are highly influenced by the works of his predecessors Hon’ami Koetsu and Tawaraya Sotatsu.

He became a professional painter in 1697 and in 1701 he was honoured with the title of ‘hokkyo’ (Bridge of the Dharma), the third highest rank awarded to Buddhist artists. During his time at Edo (now Tokyo) he had the opportunity to study the ink paintings of medieval monk painters Sesshu Toyo and Sesson Shukei, which was an important influence in his upcoming works such as Rough Waves paintings.

Irises, a pair of six-panel byobu folding screens are among the first works of Korin as a ‘hokkyo’. It was made using ink and colour on gold-foiled paper. It depicts abstracted blue Japanese irises in bloom, and their green foliage, creating a rhythmically repeating but varying pattern across the panels. A similar work was made by him about five to twelve years later known as Irises at Yatsuhashi that depicts an angular bridge sweeping diagonally across both screens. Both Irises were first displayed together in 2012 at the “Korin: National Treasure Irises of the Nezu Museum and Eight-Bridge of the Metropolitan Museum of Art” exhibition at Nezu Museum.

Korin had a lasting influence on Sakai Hoitsu, another prominent member of Rinpa School who replicated many of his paintings and popularized his work, organizing the first exhibition of Korin’s painting at the hundredth anniversary of his death.