Key social issues are tackled in the works of artist Ravi Chaurasiya, creating an instant sense of relatability and urgency for the observer. The artist enjoys working with varied surfaces and materials, bringing experimentation and play into his art. He has worked with varied raw materials, paintings, watercolor on different surfaces, paper board, ply board, drawing on different types of paper charcoal, clay sculpture, cyanotype technique related photography, site specific/site responding artwork, sound art, video art and more. Using this plethora of mediums, Ravi ultimately speaks up about the facts of life – the assault on the natural world, urbanization, garbage landfills, pollution, climate change and more, all intersecting with human society and the animal realm. The mix media creation ‘Natural disaster and urban Landscape’ is a great example of this. It recreates a cityscape of a typical crowded urban setting, albeit with apocalyptic overtones. In the triptych, the centrepiece has a mushroom cloud indicating a nuclear explosion, at the moment where it has not yet wrought havoc but is looming over the human habitat with the infinite potential to destroy. Meanwhile, in ‘Globalization’, one gets to play around a little with the concept of ‘glass half full’ or ‘glass half empty. The artist has shown two jars, one filled just above halfway with pollutants and vehicles and garbage; the second is full almost to the brim, depicted in grayer tones, with human bodies. 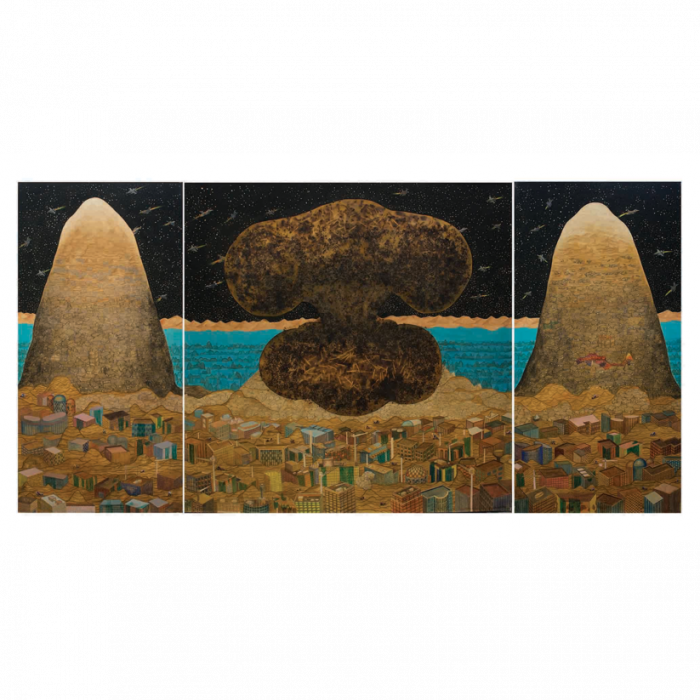 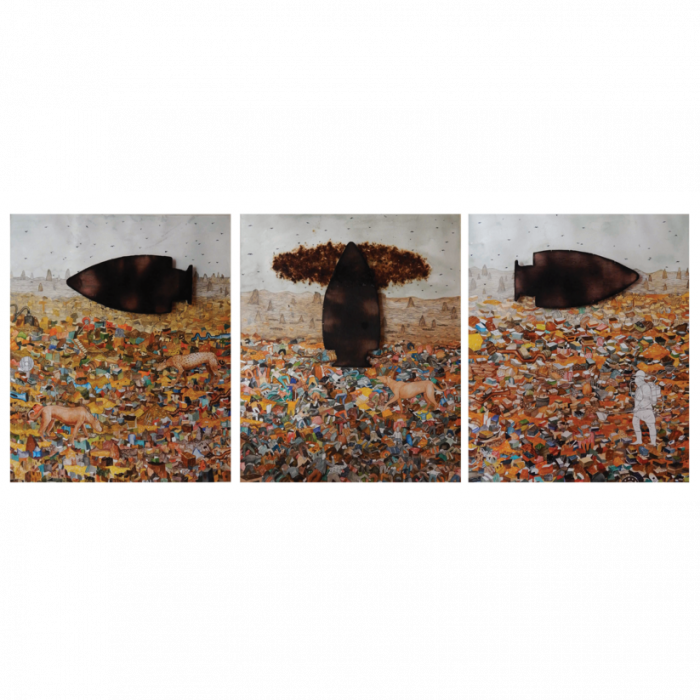 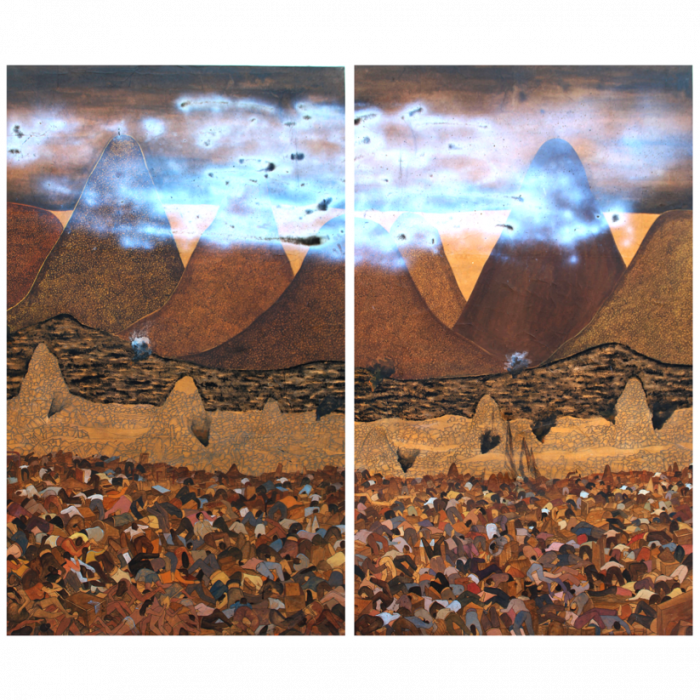 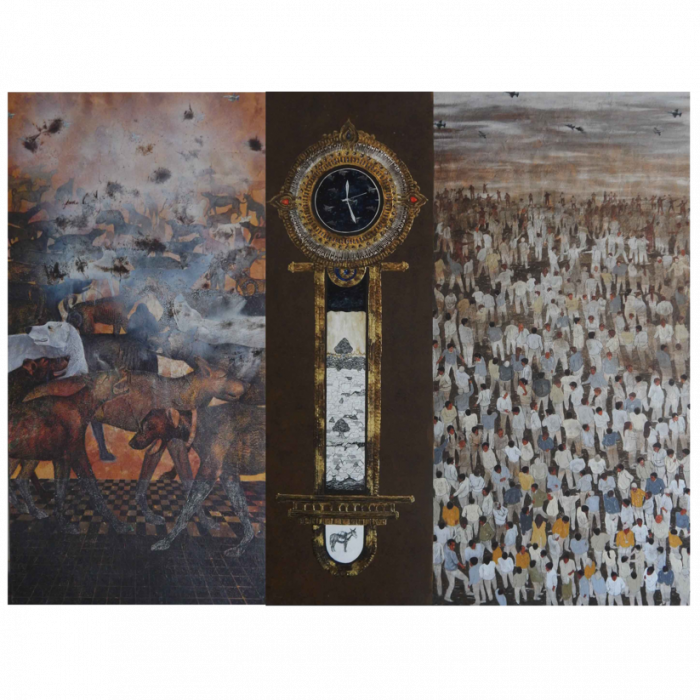 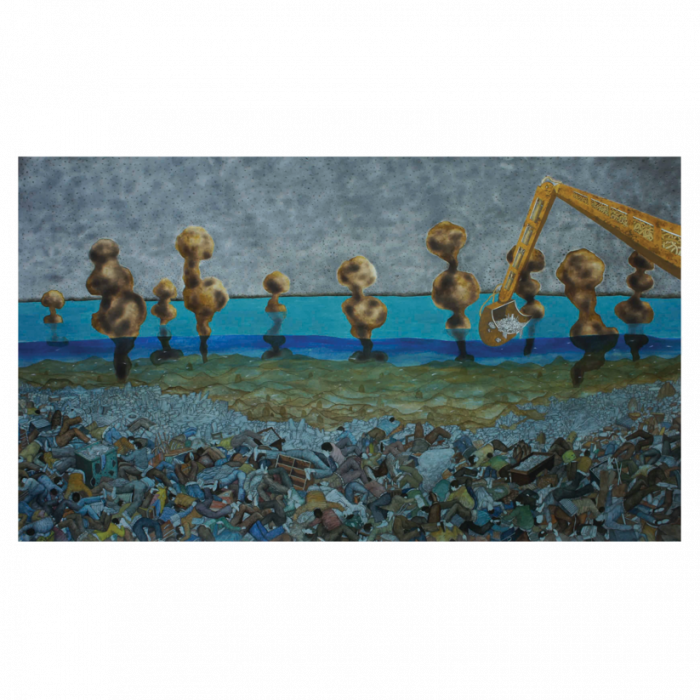 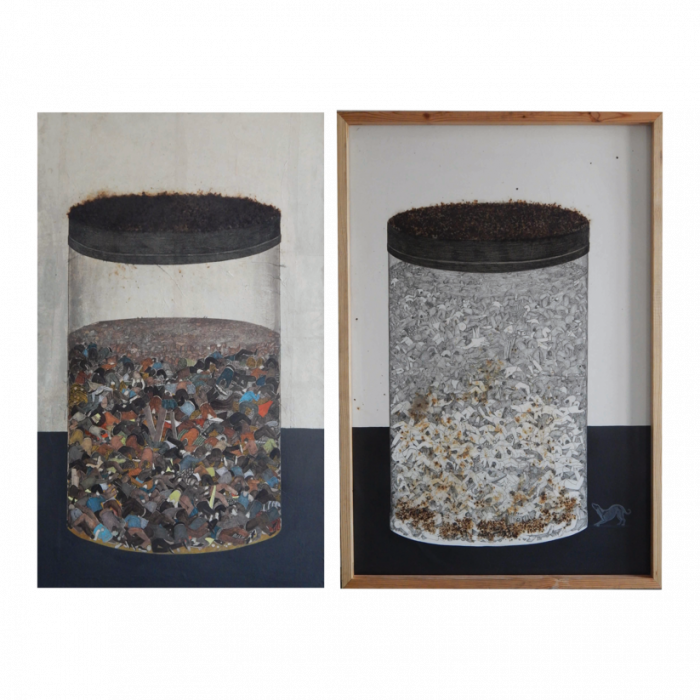 Ramesh Garawad: The faces around us, captured in expressionism

An interpretation of the diversity of human faces that surround us is what gets distilled into the art created by Ramesh Garawad. He tends to use very select colours, and mostly dabbles in the use of hues of burnt sienna, raw umber, black, white, ochre yellow and red. Taking on an expressionist bent, his works of art attempt to spark pain and joy alike in the viewer. The theme of survival and struggle also find themselves brought to life in these paintings. Conforming to these expectations is the piece titled ‘Univesal’, created using oil on canvas. There is symmetry to the design and a sense of the macabre, in the dead eyes of the faces that gather around a sun-like light, dominating the centre of the frame. The faces wear a singular expression and nearly all resemble each other as well — one could assume that the artist may be initiating dialogue about the scrutiny of the public eye on one in the spotlight, and how the unseeing vision can be both penetrating/overwhelming as well as meaningless in the same instant. In the oil-on-canvas piece titled ‘brain’, he employs a different motif that is equally popular among his offerings. Here, a seed is seen to germinate from a spore into a structure that is part flower and part brain-like, as its folds and crevices overlap almost like petals. It stands out against a dull, smoky backdrop in hues of bright orange red, evoking a feeling of coming alive out of the difficult earth. 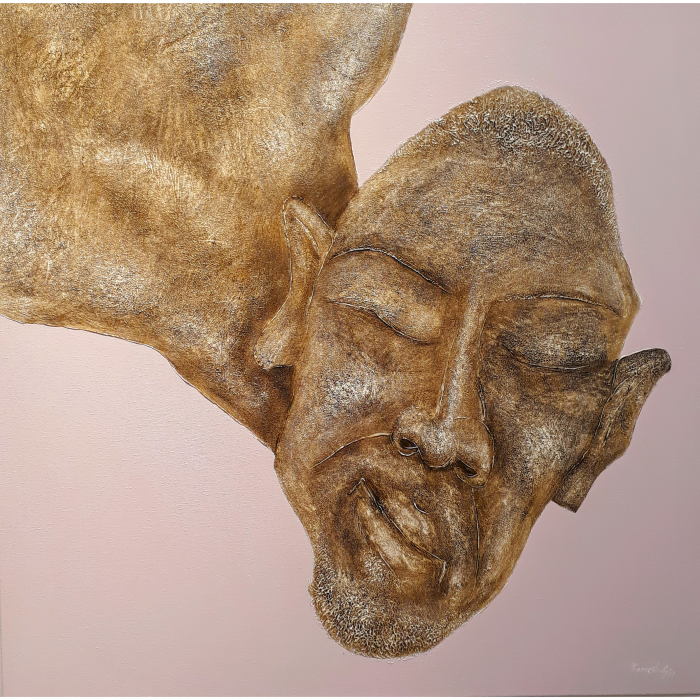 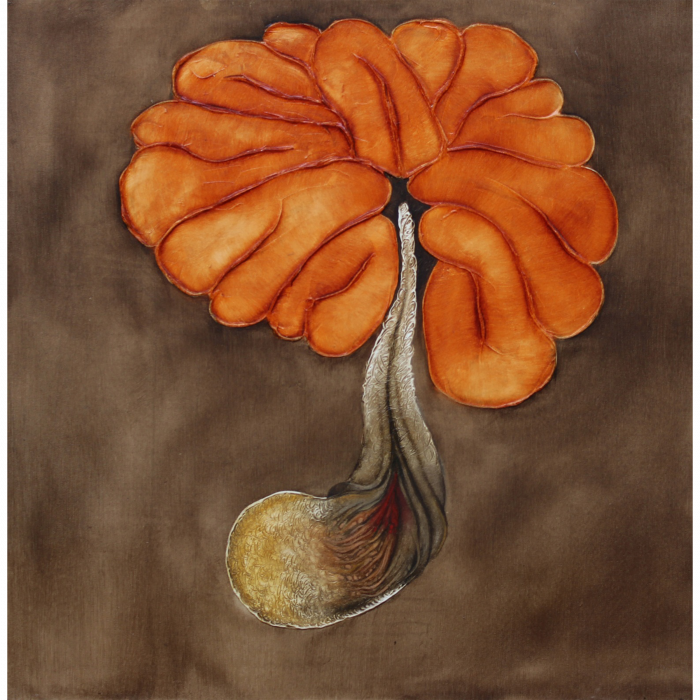 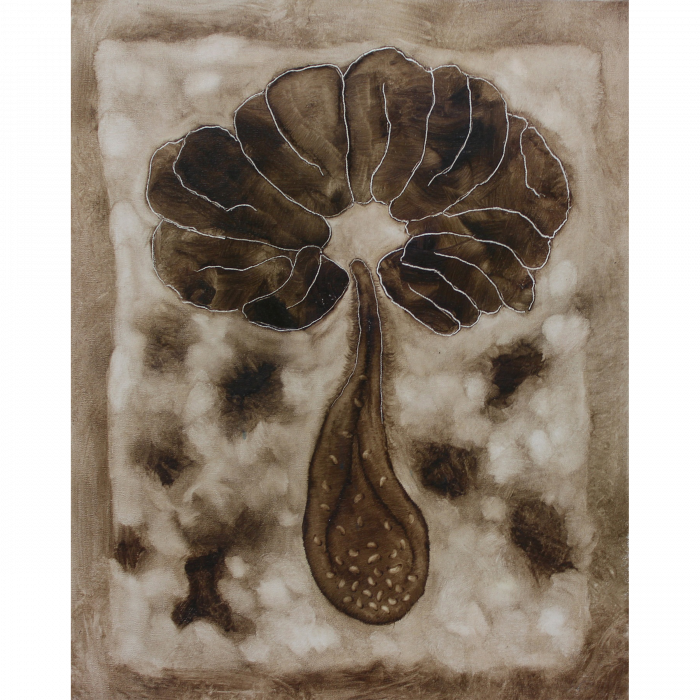 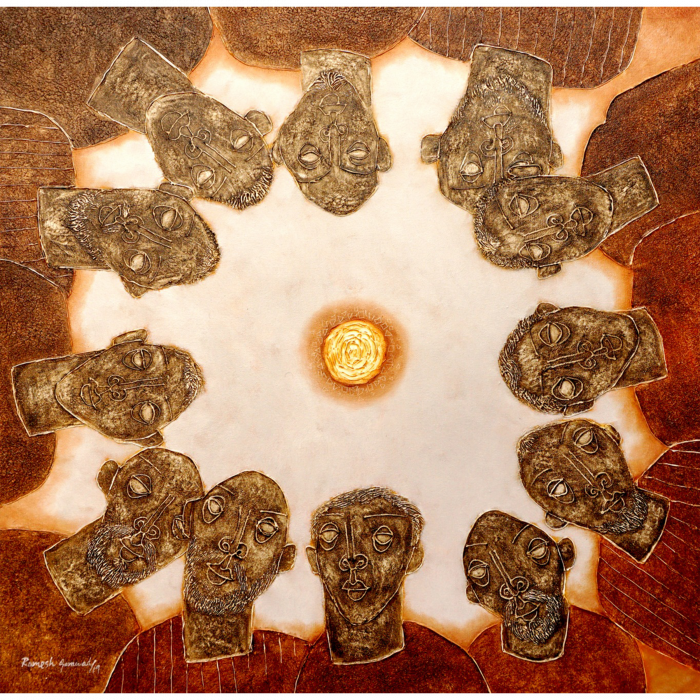 Depicting chaos, epiphany and unraveling as themes may sound easy, but isn’t. And yet, these complicated intangibles come to life via the unique medium of collage for artist Shahnawaz Siddiqui, who believes in speaking up against conditioning — the imposed identity, beliefs, ideologies and societal norms we have to live with, which he categorises as ‘dank submission’, in the words of Charles Bukowski. Ultimately, the artist professes that he is on an eternal quest for truth, and the revolt in his art stems from this cause. The thought behind the art and the medium itself are both layered. One could take for instance the piece titled ‘Red’, which is a view of the famous Howrah Bridge on what looks like an early morning, with the blurred figure of a man leaving the river shores from presumably daily ablutions. Cutting the frame pasted atop the giant steel meshing of the bridge’s mainframe is the asymmetrical cut-out of a high-fashion model, whose face is obscured from view — all one sees is a delicately heeled pair of feet and legs, a black crepe skirt all bunched up, and a jewellery-clad dainty hand resting on the knee, seated in what looks like a rather grungy backdrop. Is it a paradox of similarities? ‘Untitled IV’ is somewhat simpler, but equally beautifully executed. A wash of layered newsprint forms the entire backdrop; atop it is the silhouette of a person’s face, with flowing hair set loose. Within the cut-out, an elegant, off-white, tinged golden gown billows and flows as the faceless person donning it walks briskly out of the frame — the overall impression is like a whorl of blonde hair unfurled by the wind. 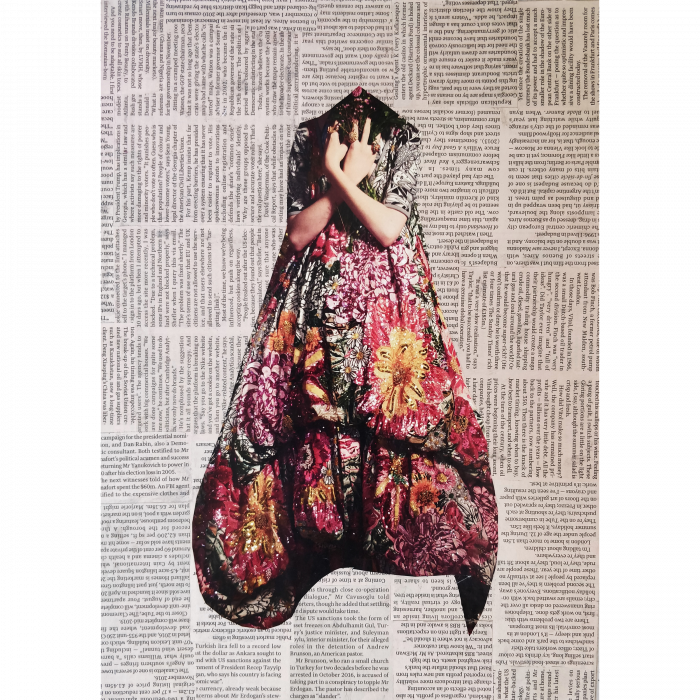 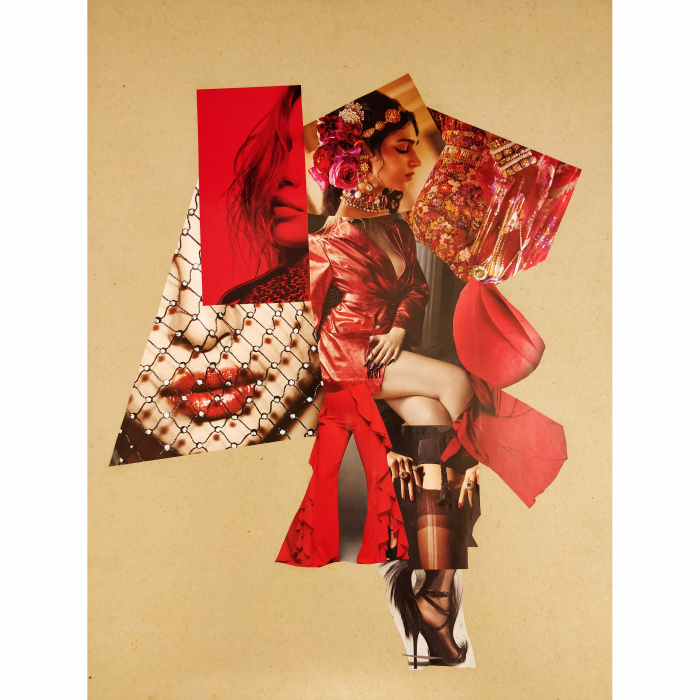 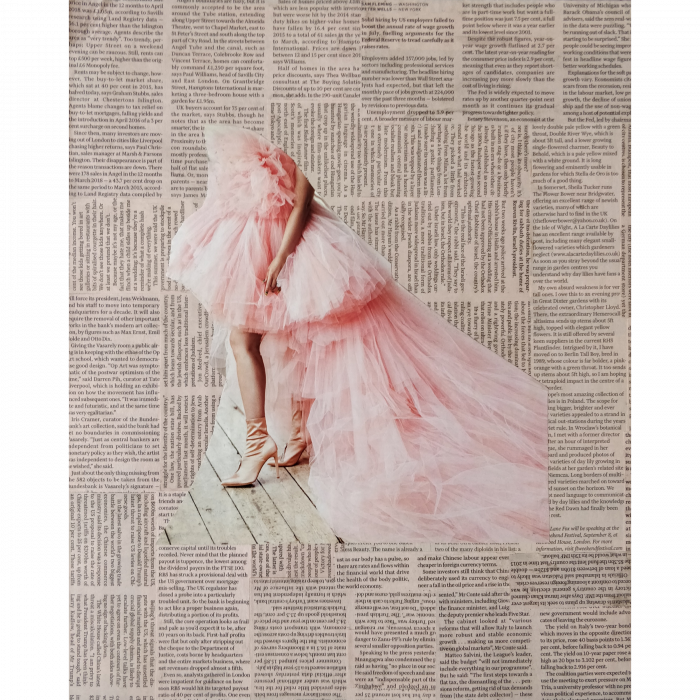 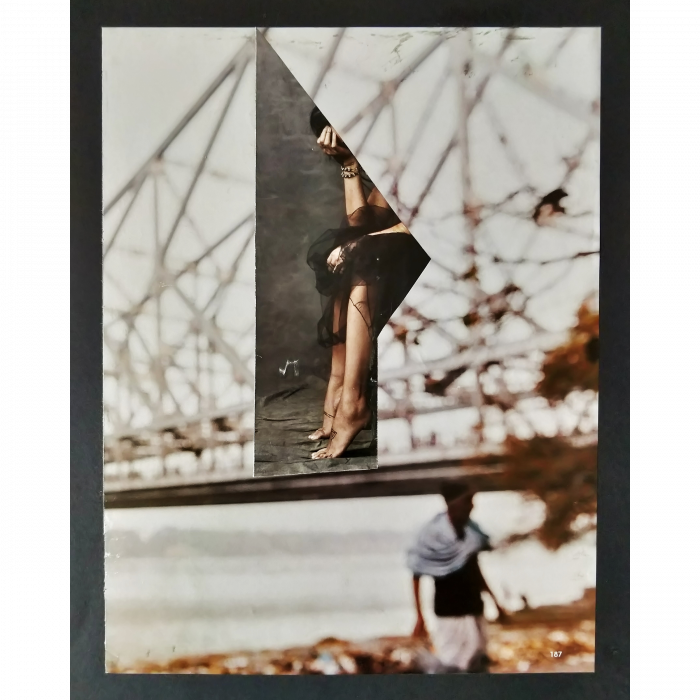 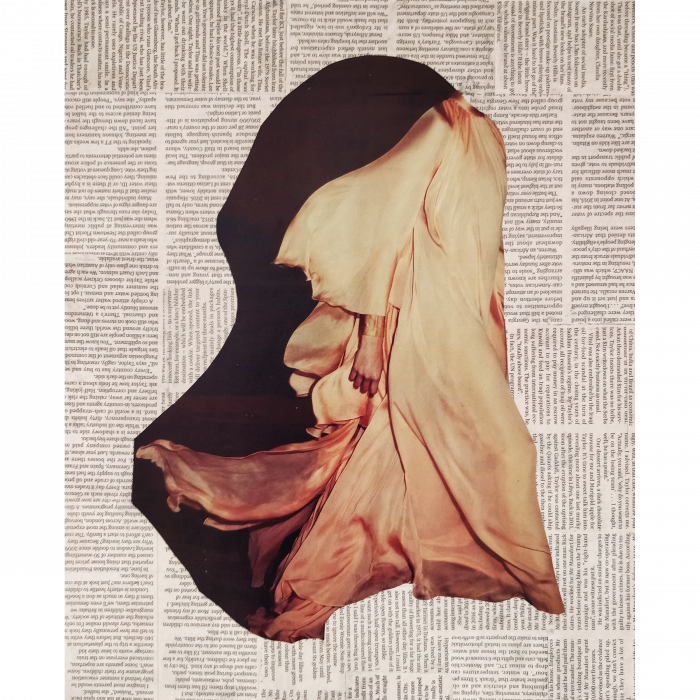 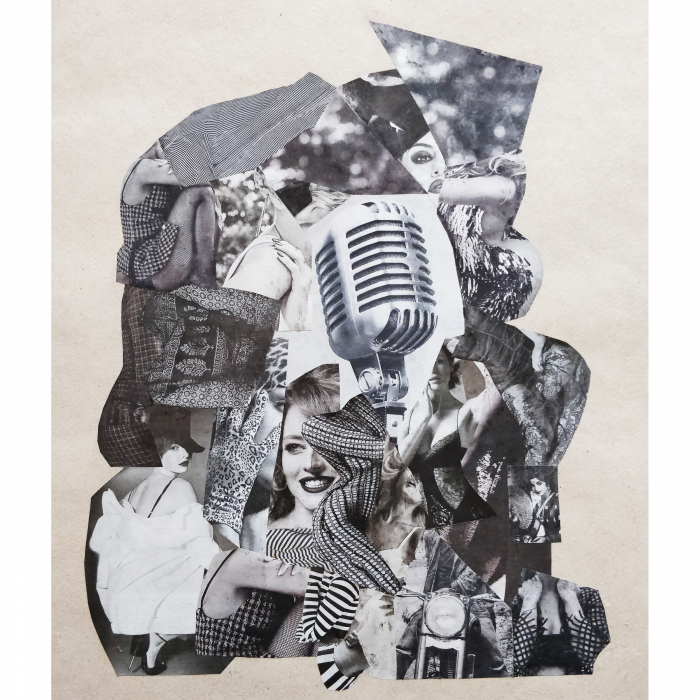 Through art, Shrimali Jayesh’s conception towards form contextualises familiar visual signs, overlapped with positive space. He uses found objects that resonate with memories — like doors and windows from an old family house that symbolise the deep connection he still feels with his parents, whose loss has translated into a lasting grief expressed in his art. Along with metal, glass and wood, he also uniquely uses fire to burn surfaces, creating textures and patterns. In ‘My Life Journey’, he employs some frequently used tropes — windows, cages, chains, pins, meshes, chains, and themes of confinement, time, obscured identity, togetherness with separation and more. We see the recurring presence of a faceless human figure wrought in layers, more often than not comprised of wiring or pins within, perhaps depicting a feeling of being trapped or in pain. This human figure is often accompanied by other half silhouettes in red, which are equally restricted from freely communicating or accessing one another. ‘Untitled 3’ repeats this, albeit with just one figure, etched onto a drape; behind this curtain is an echo of the mirrored human figure, except this one is tied with metal meshing and entrapped rigidly in place. In ‘Keys of Life’, he strikes a slightly different note, although it remains in the dark territory — a master key hangs alone in the centrepiece, with the ghost-like figure of the faceless boy etched into it; almost blending into a black background are indistinct bright pencil-like sketches of various scenes from one’s routine life, surrounded by friends, family or other people, each moment with a small key of its own. 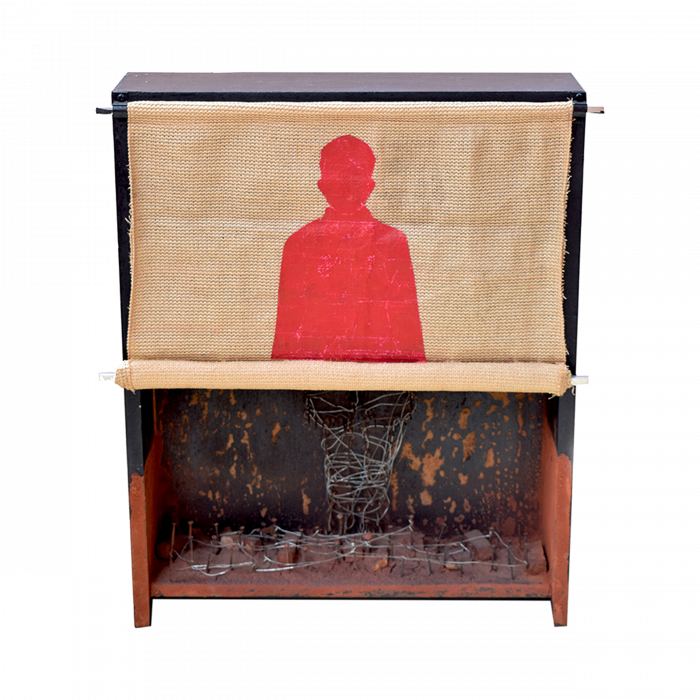 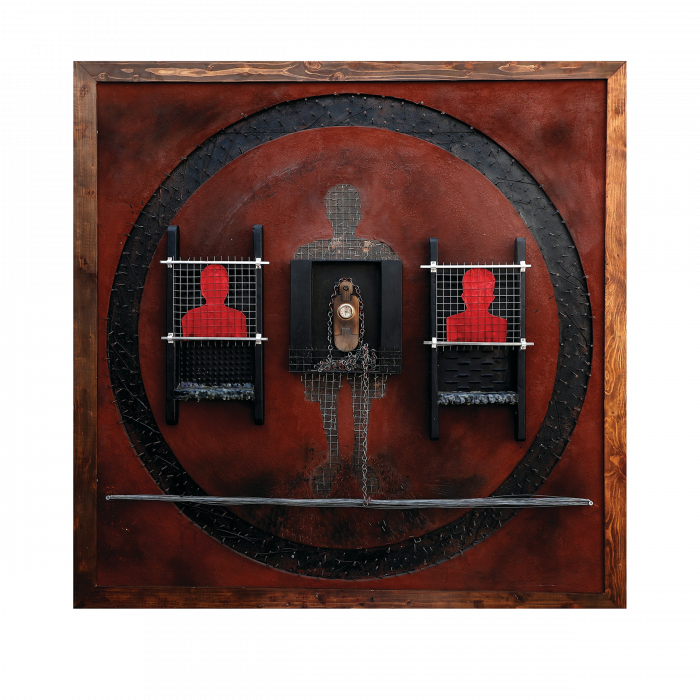 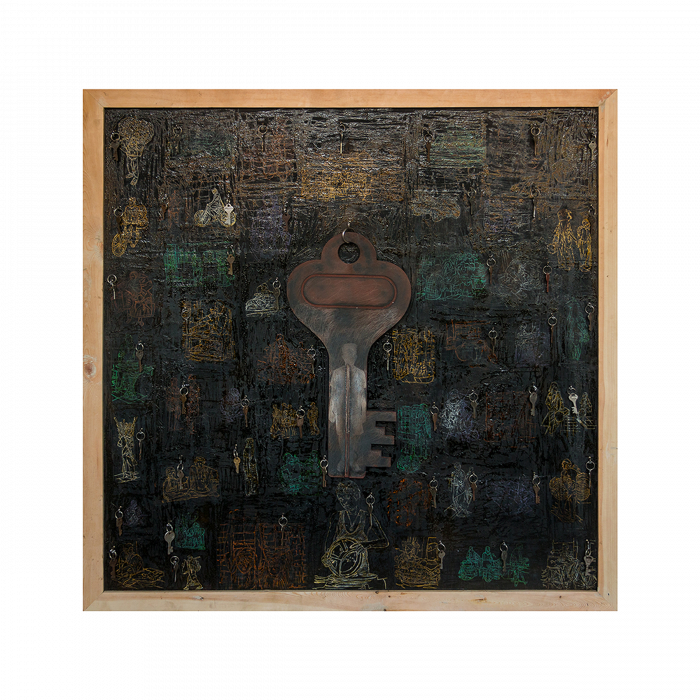 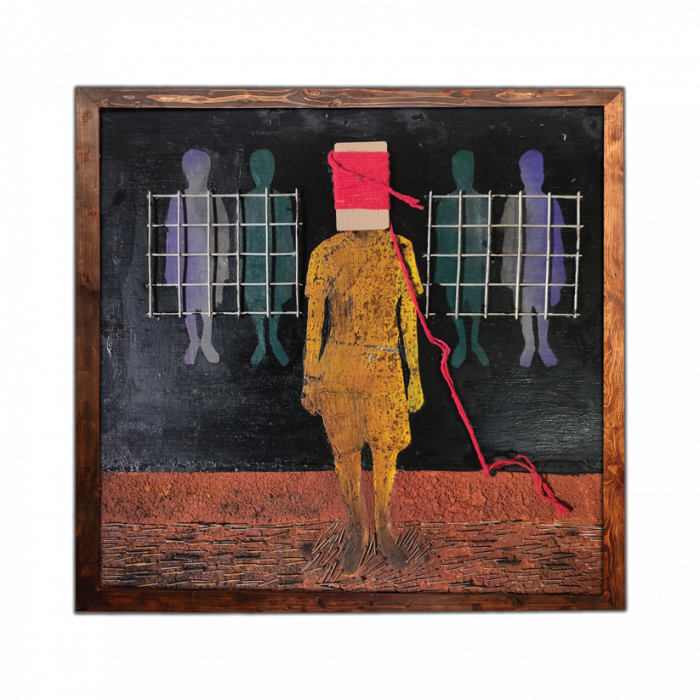 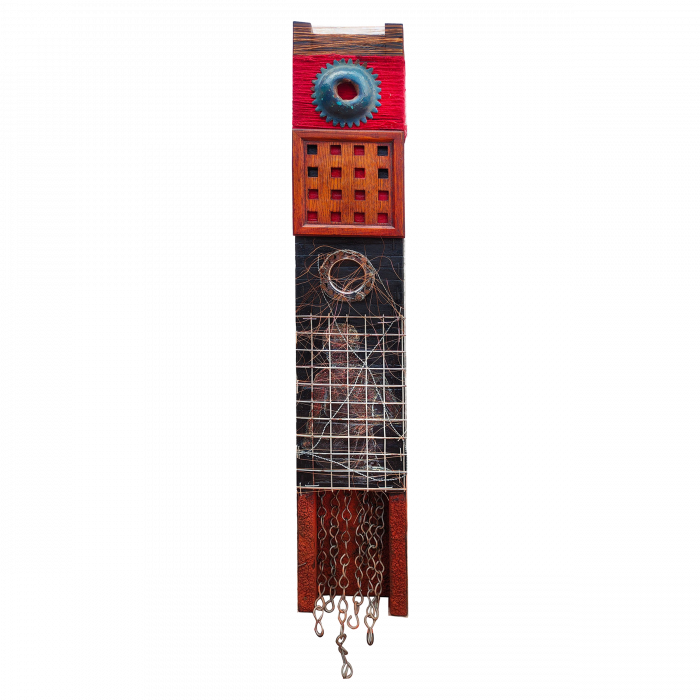 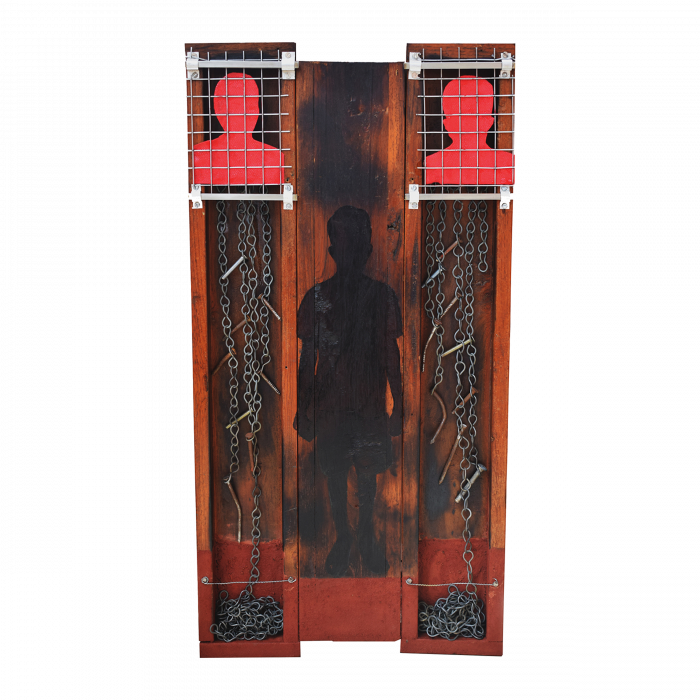