Wanderer above the sea of fog | Wikipedia

On this day September 5 in 1774, candle-maker Adolf Gottlieb Friedrich and his wife Sophie Dorothea Bechly welcomed the birth of their son Caspar David Friedrich, the sixth of ten children. Friedrich was born in Griefswald, Swedish Pomerania on the Baltic coast of Germany. He lost his mother and two sisters at an early age, and later on he lost his brother, Johann as well, who died trying to save him from a frozen lake. These tragedies seem to have had a great impact on his mind and his artistic career. Friedrich began to study art in 1790 with Johann Gottfried Quistorp at the University of Griefswald. From 1794 to 1798, he studied at the Copenhagen Academy. After that he settled at Dresden and became a member of an artistic and literary circle where he came in contact with painter Philipp Otto Runge and writers Ludwig Tieck and Novalis.

Friedrich was a German Romantic landscape painter. He is well known for his mid-period allegorical landscapes and seascapes which depict humanity as powerless against nature’s powers. His first important oil painting that brought him to limelight, was ‘The Cross in the Mountains’, which was characterized by an overwhelming sense of stillness and isolation. The painting was in great discussion due to the use of religious elements in its composition. Caspar drew flak due to his liberal use of the cross in this piece.

“I have no intention of working against the dictates of the day, of swimming against the current, when such dictates are purely a matter of fashion. Rather I dwell in the hope that time shall annihilate its own offspring, and that it shall do so quickly. But much less am I so weak as to do obeisance to the demands of the age when they go against my convictions. I spin about me my chrysalis, and let others do the same; and I leave it to time to decide what shall come of it whether a brilliant butterfly or a maggot.” These words by Caspar David Friedrich reflect the depth of his contemplative thought, visible in many of his forlorn paintings

Friedrich’s work was quick to attract attention and fame. In 1805, he received a Prize at the Weimar competition organised by the revered German statesman Johann Wolfgang von Goethe. In 1816, Friedrich became a member of the prestigious Dresden Academy of Fine Arts.

Caspar also imbued some of his landscapes with political symbolism, and through these he openly voiced his support of German nationalism and hatred for his country’s war enemies. These works would sometimes attract controversy. The painter’s popularity witnessed a significant decline in the final years of his life because of his political attitudes and increasing official attacks on his art. A stroke in 1835 greatly reduced his ability to paint, especially in oil. From then on, the majority of his final canvases were executed in watercolour and sepia. The artist died on May 7, 1840 and was buried in a cemetery in Dresden. Many years after his death, Caspar’s work would go on to inspire and influence some Modernists in Europe, such as the Symbolists. His romantic landscapes and gothic ruins did much to enrich the visual vocabulary of the Modern era, where artists borrowed from his allegorical landscapes imbued with emotive power. His silhouette-heavy paintings went on to elicit imagination beyond the painted canvas as well. The acclaimed 20th-century playwright Samuel Beckett, stated that Caspar’s ‘Man and Woman Contemplating the Moon’ was the source for his career-defining play, ‘Waiting for Godot’. 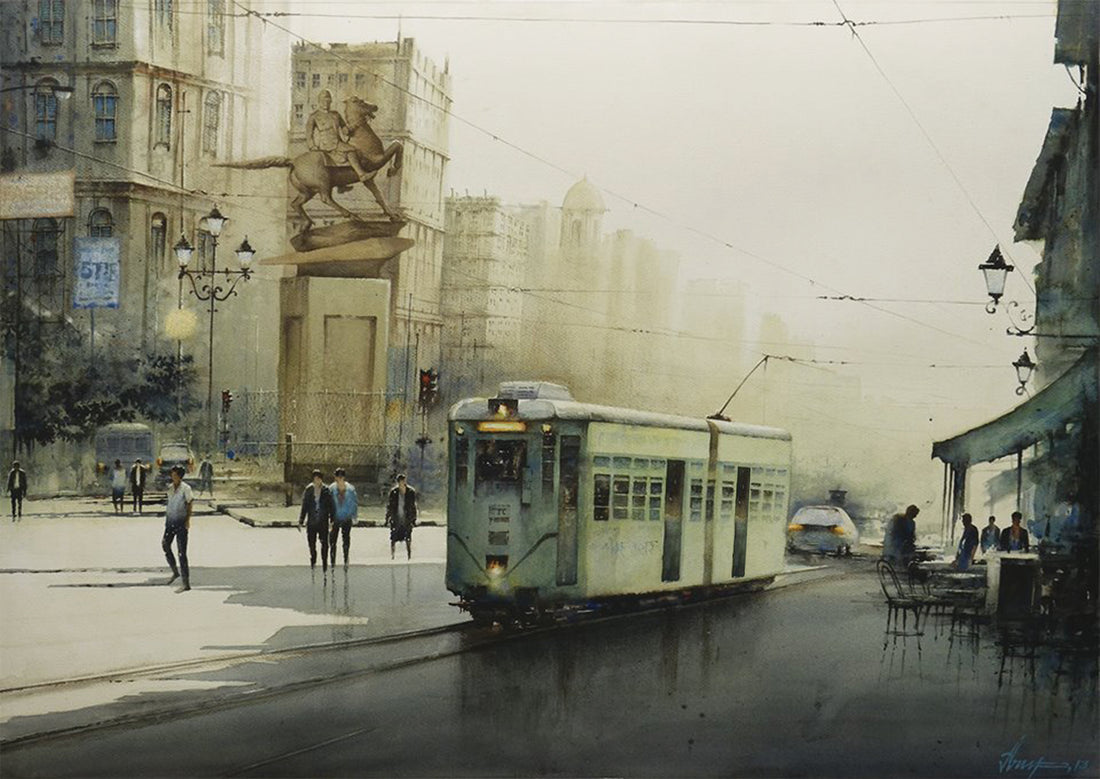 By : ANUP LODH Buy From AbirSpace
We use cookies on our website to give you the most relevant experience by remembering your preferences and repeat visits. By clicking “Accept All”, you consent to the use of ALL the cookies. However, you may visit "Cookie Settings" to provide a controlled consent.
Cookie SettingsAccept All
Manage consent