Garretson Beekman Trudeau, popularly known as Garry Trudeau, was born on this day, July 21, 1948. He is a Pulitzer Prize-winning American cartoonist, best known for creating the Doonesbury comic strip.  Doonesbury chronicles the adventures and lives of an array of characters of various ages, professions, and backgrounds, from the President of the United States to the title character, Michael Doonesbury, who has progressed from a college student to a youthful senior citizen over the decades. Trudeau is also the creator and executive producer of the Amazon Studios political comedy series Alpha House.

Born in New York City into an influential family, three generations of which were involved in finding healthcare solutions to alleviate pulmonary tuberculosis, Garry was raised in Saranac Lake, New York, and attended St. Paul’s School in Concord, New Hampshire. In 1966, he enrolled in Yale University as an art major but soon realized he was drawn toward graphic arts. He began contributing actively to The Yale Record, Yale’s humour magazine. Eventually, he began serving as The Yale Record’s editor-in-chief. Around this time, he first published two collections of Bull Tales, a comic strip parodying the exploits of Yale quarterback Brian Dowling. This strip was later to catch the attention of the newly formed Universal Press Syndicate’s editor, James F. Andrews, and renamed as Doonesbury in 1970. Today Doonesbury is syndicated to 1,000 daily and Sunday newspapers worldwide and is accessible online in association with The Washington Post. 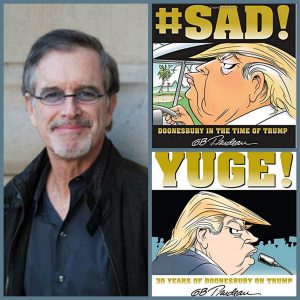 Meanwhile, Trudeau went on to receive a master of fine arts degree in graphic design from the Yale School of Art in 1973. It was there that Trudeau first met photographer David Levinthal with whom he collaborated on Hitler Moves East, an influential “graphic chronicle” of the German invasion of the Soviet Union. In 1975, Trudeau became the first comic strip artist to win a Pulitzer, traditionally awarded to editorial-page cartoonists. He was also a Pulitzer finalist in 1990, 2004, and 2005 and won several other prestigious awards. In addition to his creating the strip, Trudeau has worked in both theater and television. He was nominated for an Oscar in 1977 in the category of Animated Short Film for A Doonesbury Special, created for NBC in collaboration with John and Faith Hubley. The film won the Cannes Film Festival Jury Prize in 1978.

In 1988, Trudeau wrote and co-produced with director Robert Altman HBO’s critically acclaimed Tanner ’88, a satiric look at that year’s presidential election campaign. The show won the gold medal for Best Television Series at the Cannes Television Festival, the British Academy Television Award for Best Foreign Program, and Best Imported Program from the British Broadcasting Press Guild. It earned an Emmy Award, as well as four ACE Award nominations. In 2004, Trudeau reunited with Altman to write and co-produce a sequel mini-series, Tanner on Tanner, for the Sundance Channel. 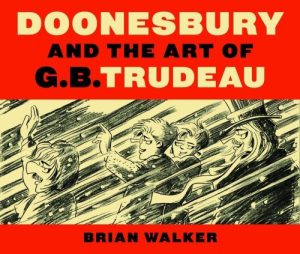 In 2013, Trudeau created, wrote, and co-produced Alpha House, a political sitcom starring John Goodman that revolves around four Republican U.S. Senators who live together in a townhouse on Capitol Hill. Vocal on the socio-political front, Trudeau has contributed to such publications as Harper’s, Rolling Stone, The New Republic, The New Yorker, New York, and The Washington Post. From 1990 to 1994, he wrote and drew an occasional column for The New York Times op-ed page, and was a contributing essayist for Time magazine from 1996 to 2001. A regular graduation speaker, Trudeau has received 37 honorary degrees.

Seattle museum nixes showcase of Big Tech employees’ art amid backlash; and more from the world of artGoogle honours victim of school shooting by memorializing her drawing; Ibiza authorities seize a Picasso sketch worth more than $460,000; and one more Art story