Decay, struggle, abstraction and evolution from this week’s artists

Themes that dominate the soul of Tribhuvan Kumar’s artwork, executed often via the medium of etching and wood, include human subjects like the families of labourers, as well as elements of nature like flora and fauna. The representation of the human body often morphs into a part of nature and at other times, vice versa, in his complex paintings. There is an overwhelming animism to his works that is rendered in sombre colours, almost reminiscent of sepia tones. Motifs like turtles are recurrent, which Tribhuvan attributes to the wisdom associated with these beings; they are frequently seen almost speaking with the humanoid elements of his canvas. Similarly, honeybee and dragonfly motifs symbolise hard workers and their beauty. Renderings like ‘Game of Lifemanship’ and ‘Possession of Life’ both show chimeral creatures and beings tied in with silhouettes of humanity. The forms within are captured almost cyclically — this is interpretable as evolution, whether personal or social. In the work titled ‘Publicity’, there are more urbane elements, such as a chess board, newsprint, and two figurines obscuring their faces, but remaining semi-clad otherwise; another politically loaded title for one of his works is ‘Women’s Libber’, depicting a theme of fertility and cocooned-ness. 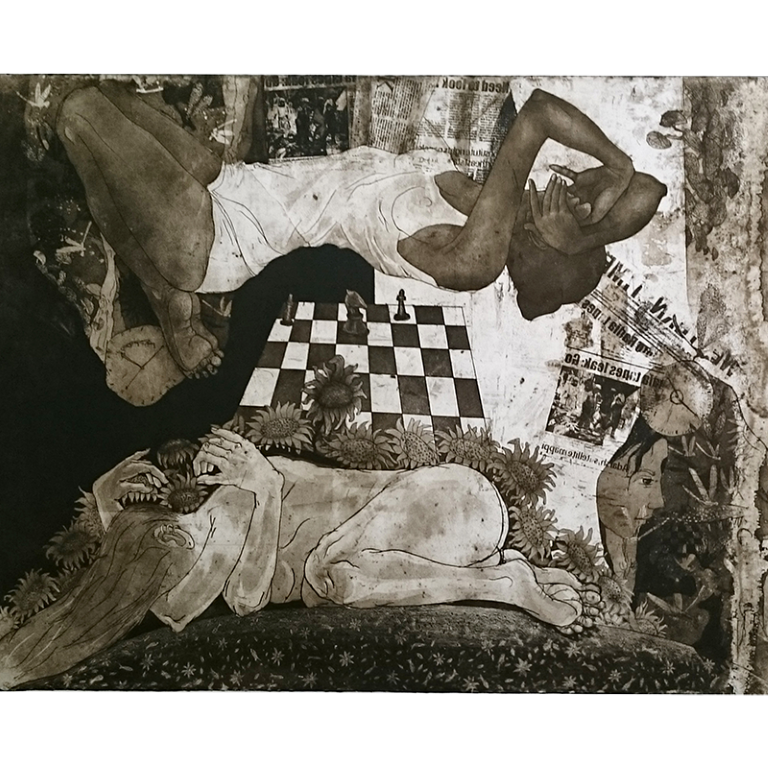 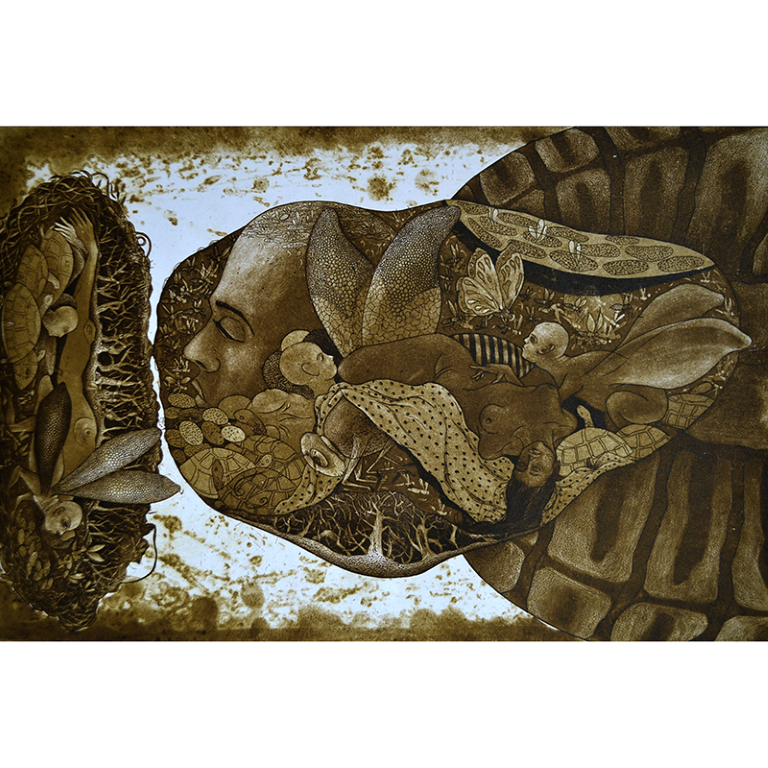 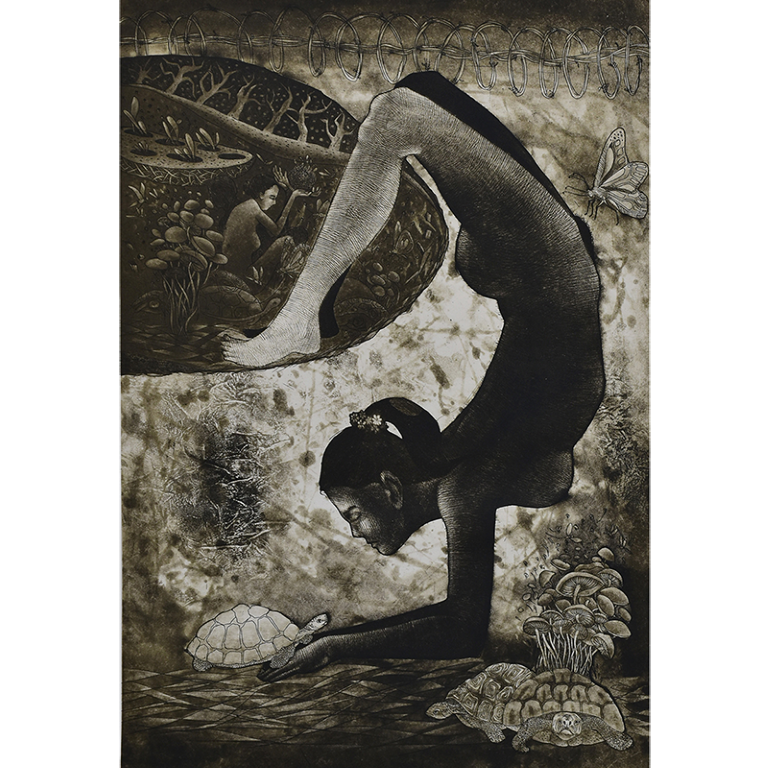 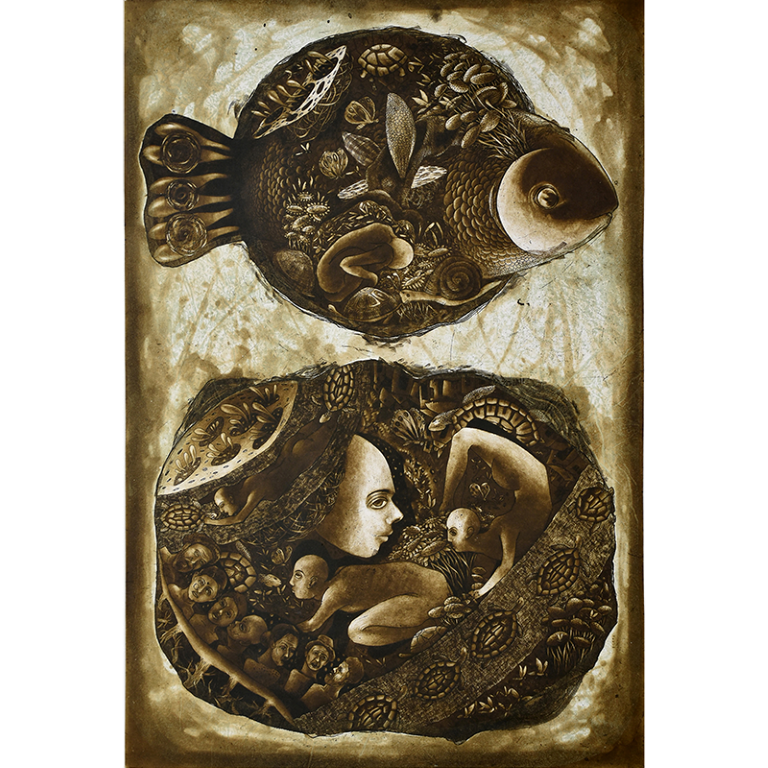 Ritesh Rajput: Forging brass and stone into beasts of burden

The unbidden potential of raw materials truly inspires Ritesh Rajput to manipulate them into forms that symbolize art he believes in. Marble, metal and stone meet a new kind of malleability with this artist, who has been delving into an understanding of demand and production of material items. According to him, art is made to invoke emotion and his sculptures do just that, communicating with one’s self, creating illusions and questions in the mind about different possibilities of known realities. Take for instance the various brass items titled ‘Struggle’, created by Ritesh, wherein small humanoid brass figurines prop up hewn pieces of intricately carved marble or rock — an image reminiscent of Greek mythology’s Sisyphus. A pristine white miniature elephant sits in the centre of another piece, bearing delicate coloured markings; in yet another, a brass bull or a horse prop up a burden-carrying rider or relatively large piece of carved stone, respectively, in artworks titled ‘Frieze’. The geological elements of these mini-sculptures are carefully chosen to contrast, meld or stand out. In the remarkable pieces called ‘Holding Heritage’, the figurine’s face is completely obscured by the outer walls of a scaled-down fort’s minaret being balanced on the head, as both a burden and a home. 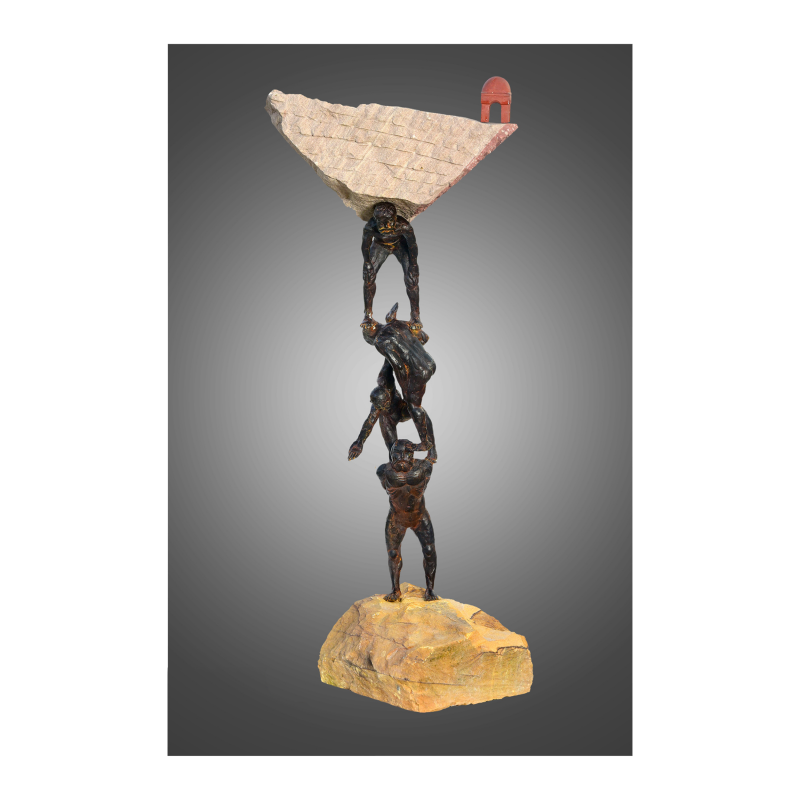 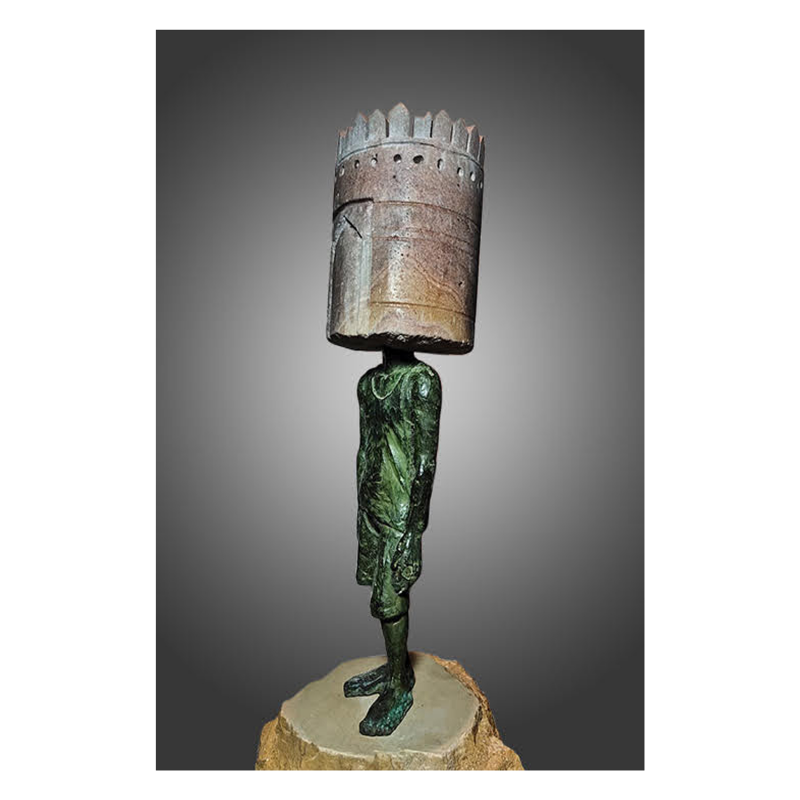 Pranoti Malkute: Fruit, fertility, and the drama of decay

The fascinating lens of this artist views the metaphor of cut fruit to symbolize the different stages of a woman’s life. The simultaneous levels of ripening and decay are represented by Pranoti Malkute in striking colours, contrasts and painted textures, highlighting the drama of change in natural cycles, and also the perspective that views them as everything from unassuming to divine. In the series titled ‘Temperament’, rendered using the medium of viscosity, the outline of sliced fruit shows its core in earthily depicted seed; the hues of the artwork indicate tropicality, flavour and freshness. In yet another piece under the same title, there is an almost floral aura to the subject, depicting a core emerging from a petal-like bed, with delicate filaments coiled around it. One gets an almost visceral sense of fibres, husk and flesh from the masterful rendition of the artist. Pranoti also showcases in her repertoire art titled ‘Affinity’, bearing a darker, almost sepia-like tone, with the depiction of humanoid elements, organs in harvest, and protozoa-like beings shown amid a base of tangled underground roots; there is a semblance of a nightscape in this series, even as botanical motifs mix with allusions to fertility. 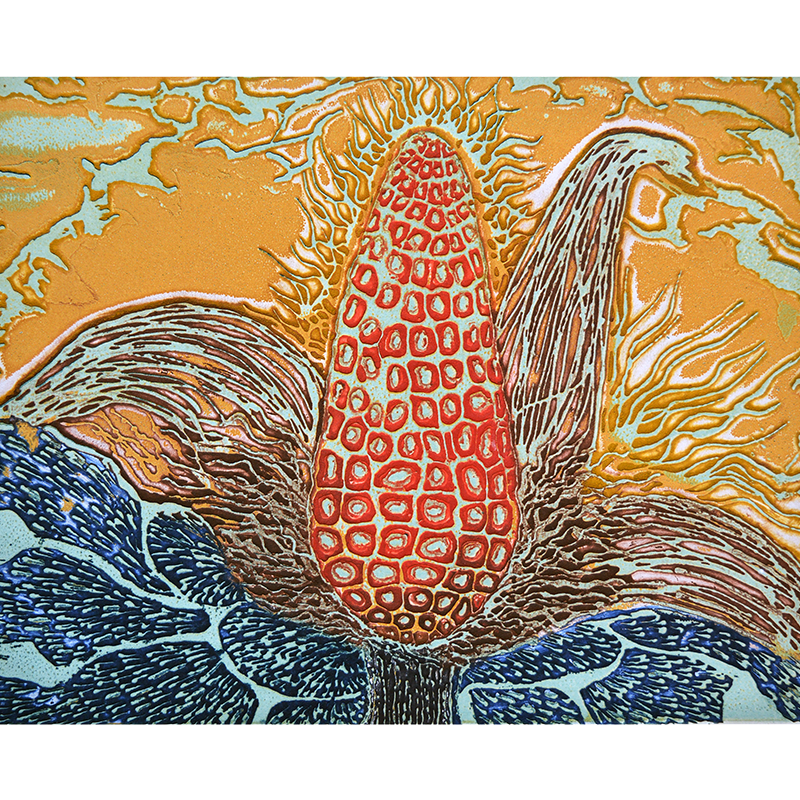 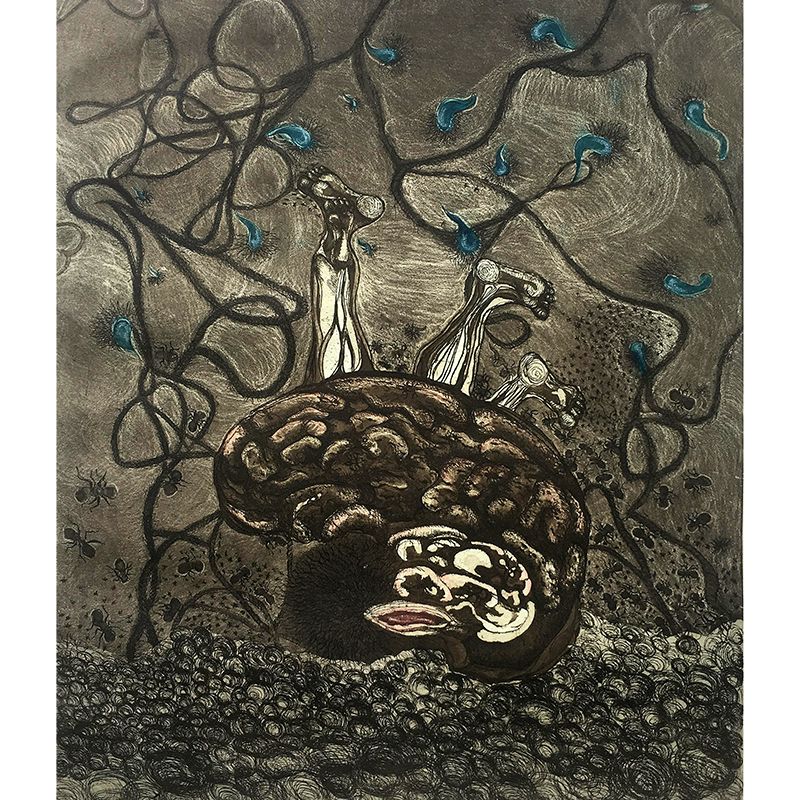 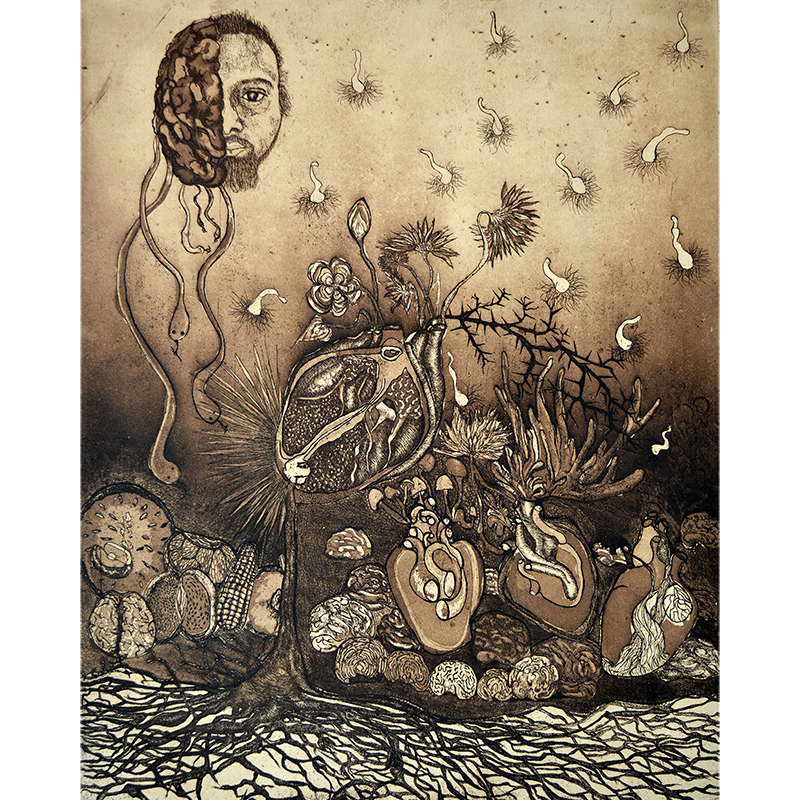 As a dynamic young artist with remarkable clarity in his creations, Krutarth Nanavati believes that each line and stroke has its own unique quality, and understanding the strength and magnitude of every element is key to creating art. Using abstraction as a means to communicate with intangibles, Krutarth uses the mass and void values of every single colour, imbued with their own unique character, to bring out a particular energy. Wielding acrylics on canvas, he makes minimal use of colour values; his striking frames fascinate the viewer with the sheer diversity that even a single colour can yield when their shades, tonality and textures are treated with a deft hand and eye. Besides his near-monochromatic pieces, there are others that imbue a subtly adventurous colour palette, lightly mixing in flashes of yellow and green within shades of gray, for instance. In yet another artwork, a striking shade of dark teal is rent by almost animistic bolts of yellow and black. The scale and dimension of his art draws in the viewer to seek meaning almost instinctually. 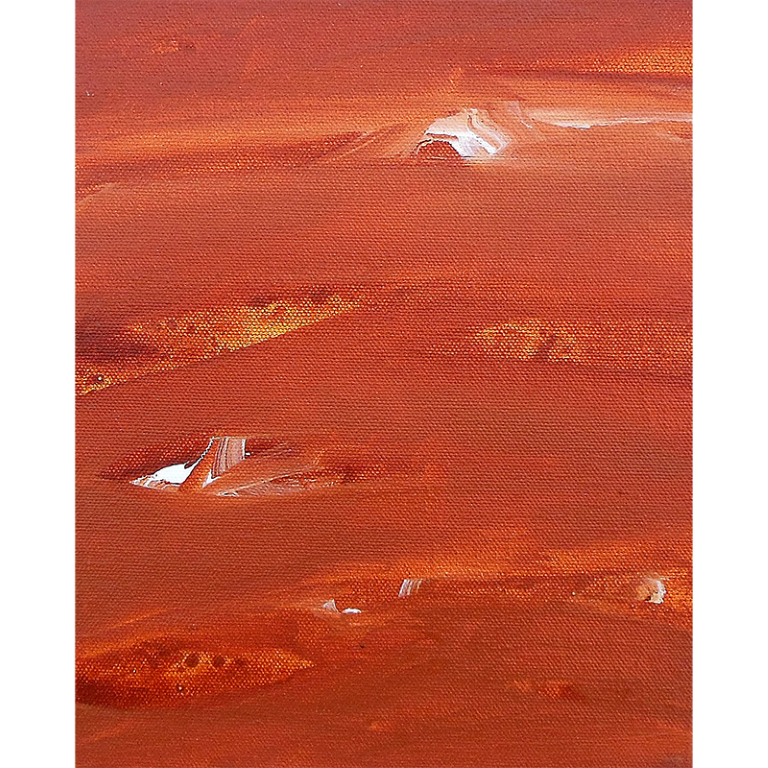 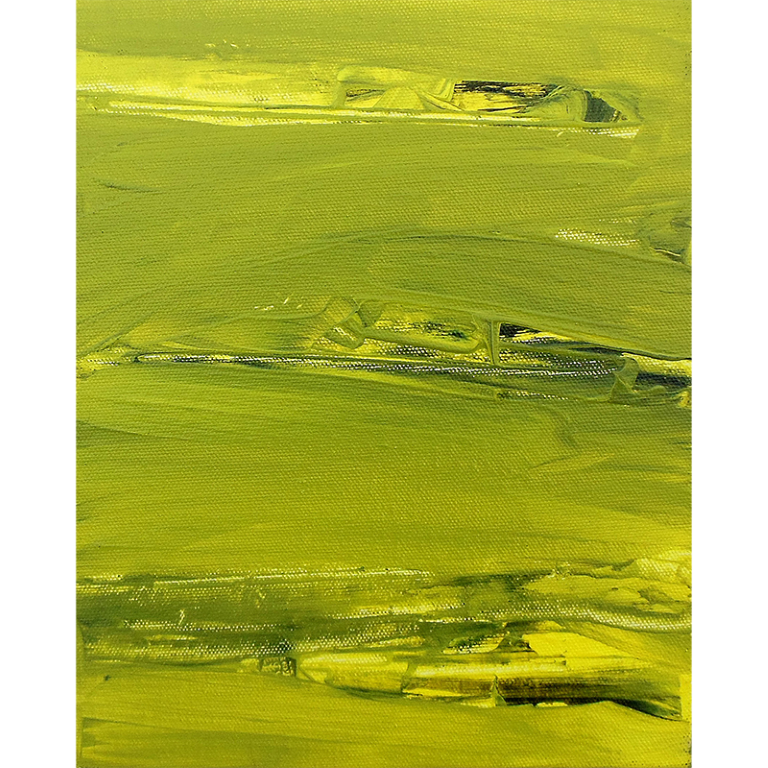 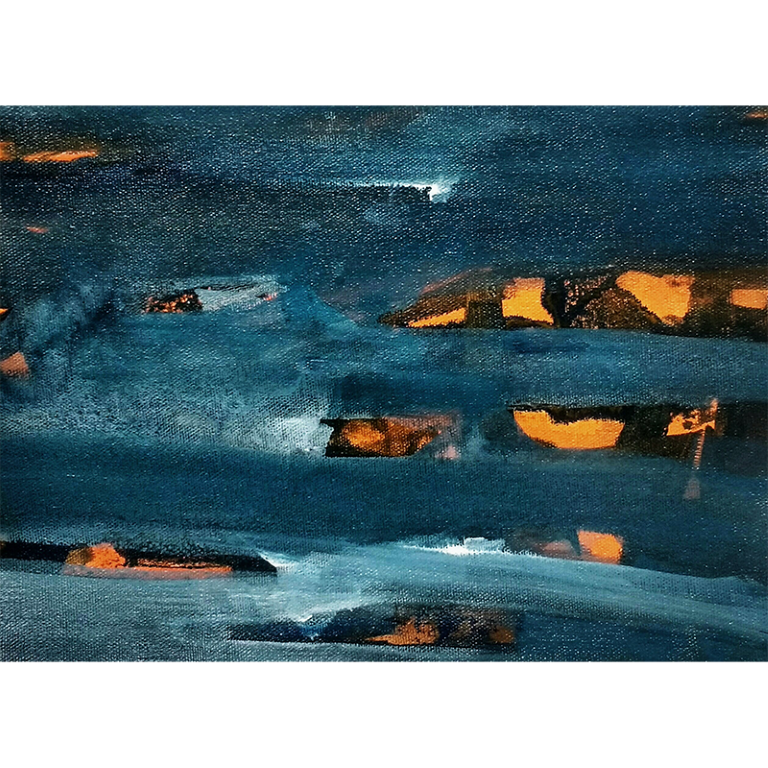 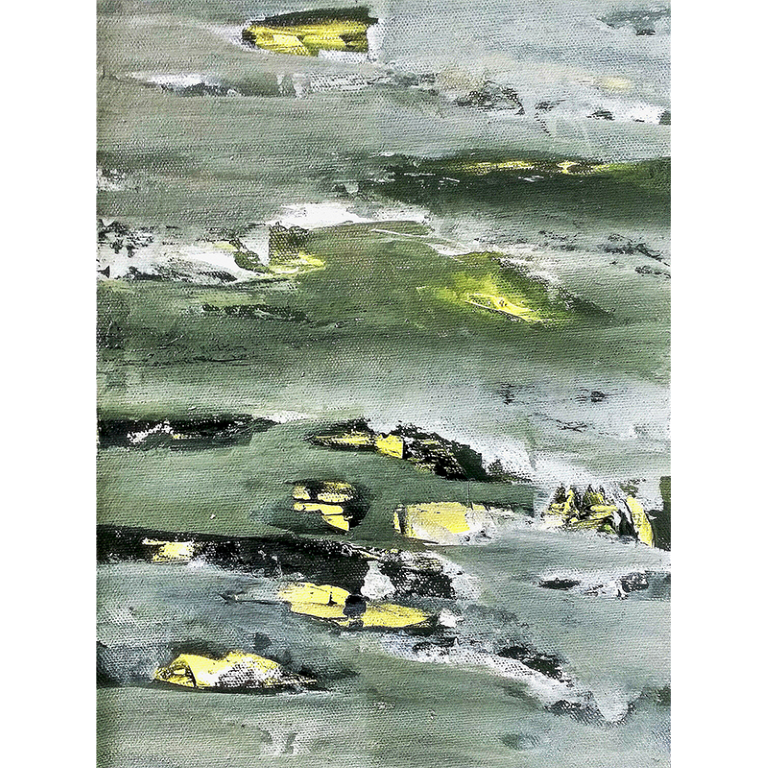 M F Husain: A retrospective of the pilgrim of artNew-age art: A single tweet is poised to sell for $2.5 million