Distilling joy, sorrow, empathy and the journey of life into art, this week

Through the centuries, art has often turned into a conduit for relaying not just beauty, but also darkness, which carries its own fierce truth. Through war and disaster, art has been used to portray pain and loss — also often for deeply personal sorrows. Courageously choosing to be a voice for those who have experienced such tragedy, artist Durga Das effectively portrays struggle, challenges and conflict. For instance, a running theme for his works has drawn from the 1984 Bhopal Gas Tragedy, whose victims have shared the after-effects of the calamity for generations to come. Das has tried to manifest the pain in that atmosphere as agony in print — this is visible in some works of his like ‘The Ninght of 84 II’. Created using etching and aquatint, this is a haunting image of a young child in clear distress, barely able to drink water from a glass administered by gentle, faceless hands that look to be helping the young victim regain consciousness, as he struggles in clear anguish. Another interesting piece by Das using drypoint is ‘Unceasing’, wherein we see the panicked face of a person cowering inside a cardboard parel crate, their hands bound by packaging material — below in the chimeric darkness gathers a mob of mob of people of all ages and origins, who seem to be searching for something or someone — a commentary perhaps on capitalism that reigns in this day and age. 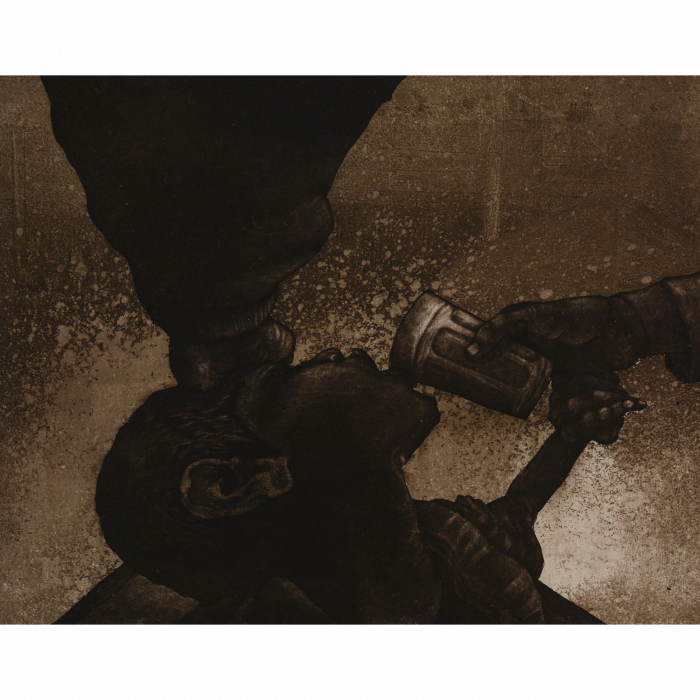 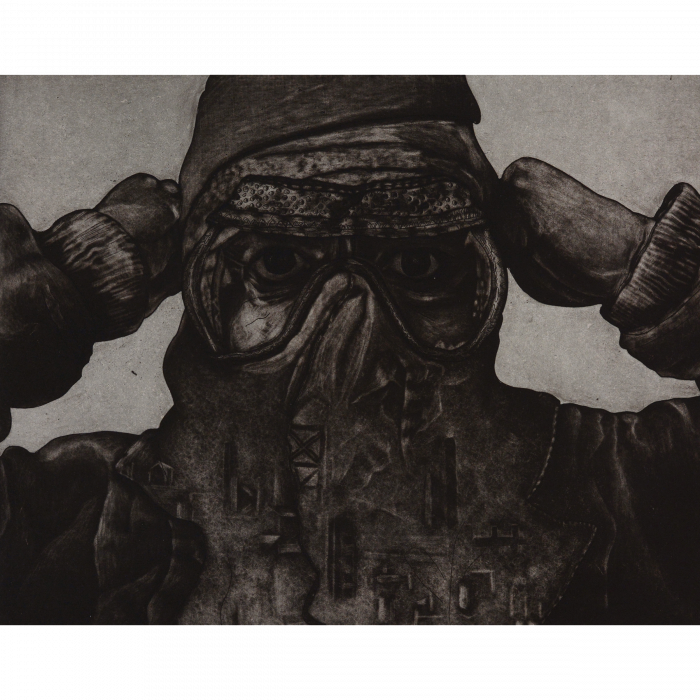 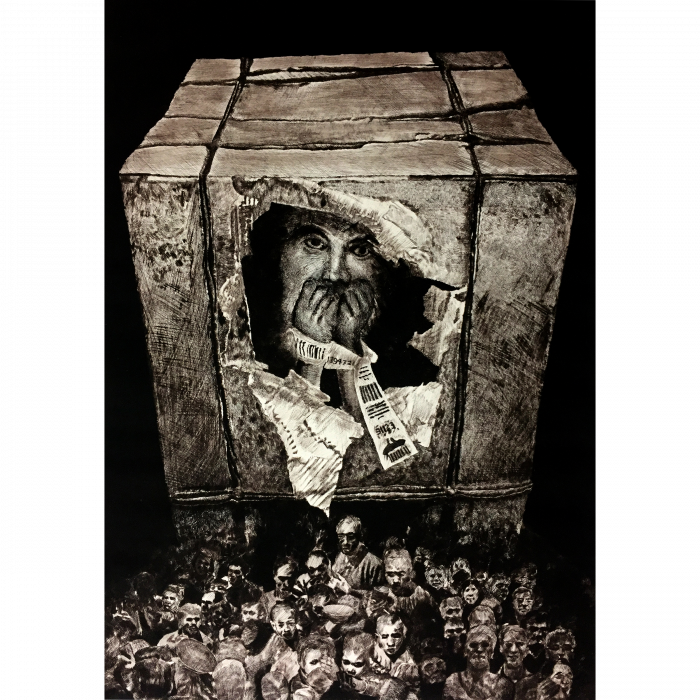 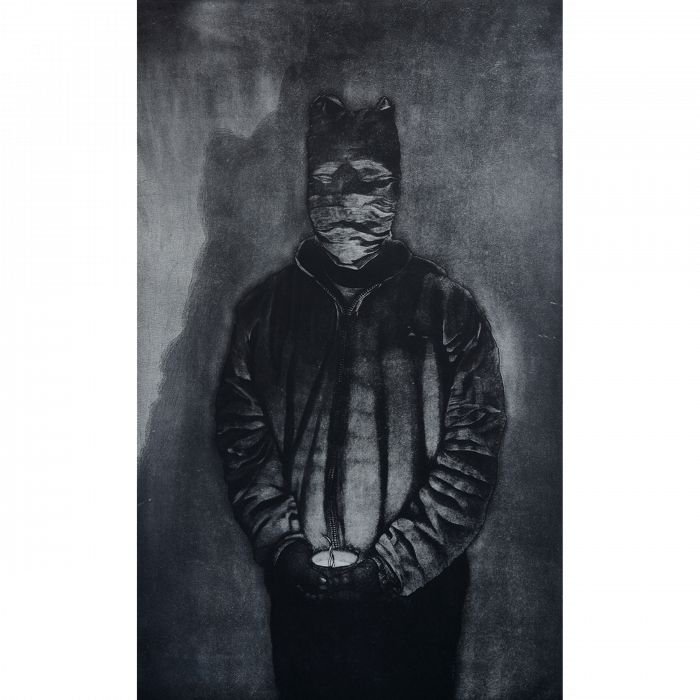 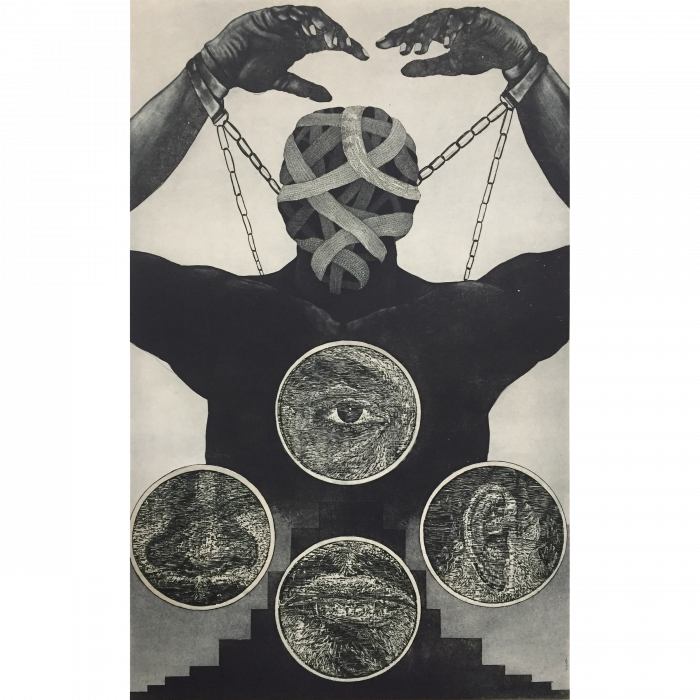 There is an uplifting sense of simplicity and minimalism in the artworks created by Rajani Bhosale, who professes that she believes nature is the fount of all creation, and these themes strongly influence the pieces she creates. Using acrylic on canvas, much of her art employs the use of lighter, brighter, pastel-inclined shades. There is also quite a frequent and prominent use of geometrical forms and shapes, either standing alone as a centerpiece or blending into on another to create juxtaposition. Numerous everyday observations seep into her work, placing both the implements of our material life and the blessing of nature alongside one another, almost as if celebrating their relativity. In ‘Water Lily’, for example, one could nearly assume that they have stepped into a Mediterranean set-up — such is the effortless sense of sunshine that one gets from the colour and lighting used within the artwork. Shades of purple, pink and peach meld together with a bright burst of verdant green at the centre, appearing to be outdoors as it is unusually merged between two barely present flights of stairs, and what appear to be mountains in the backdrop. This surrealistic framework is less pronounced in ‘Intoxicated night’, but it stays intriguing within context, nonethless. Here, we once again have a burst of purple, with a small, golden tower-like glass, appearing to be composed of multiple small lilac bowls. Right next to it is a finite, semi-circular shape, within which we see what looks like either a matchbox or a book, a triangle on top of it pointed almost worshipfully at a floating cigar. 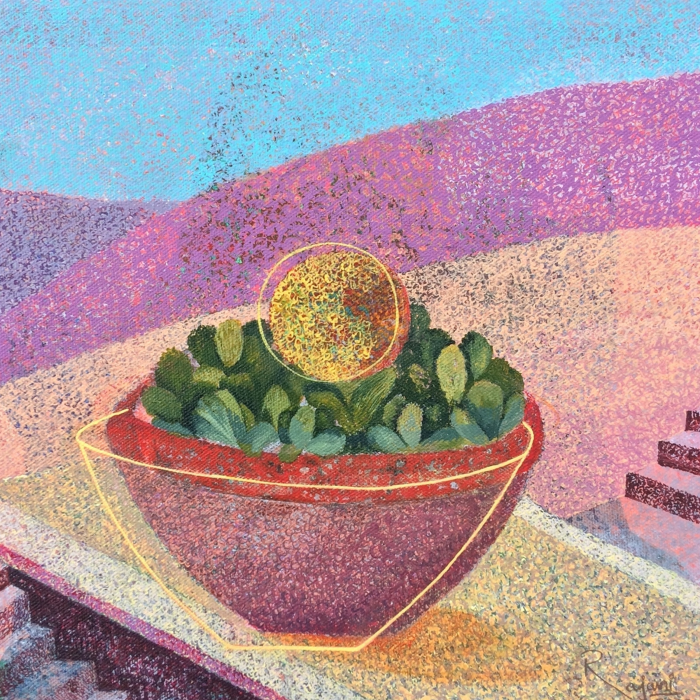 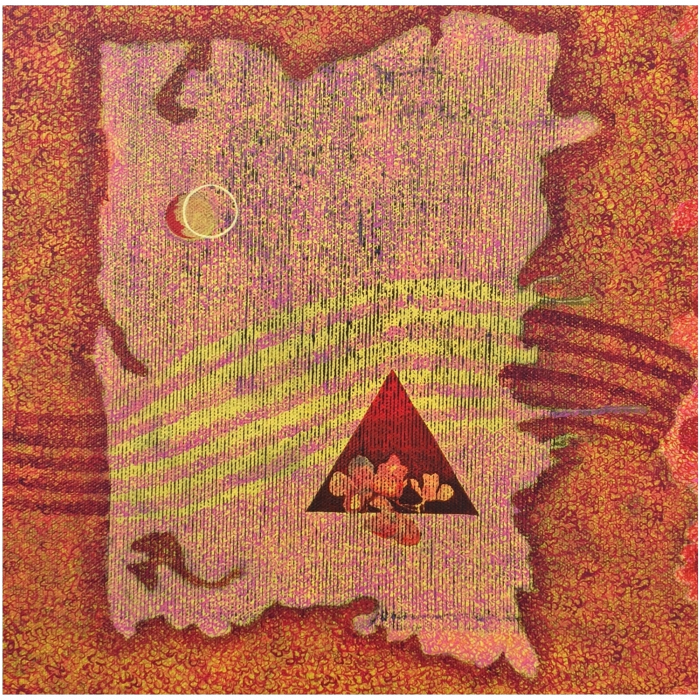 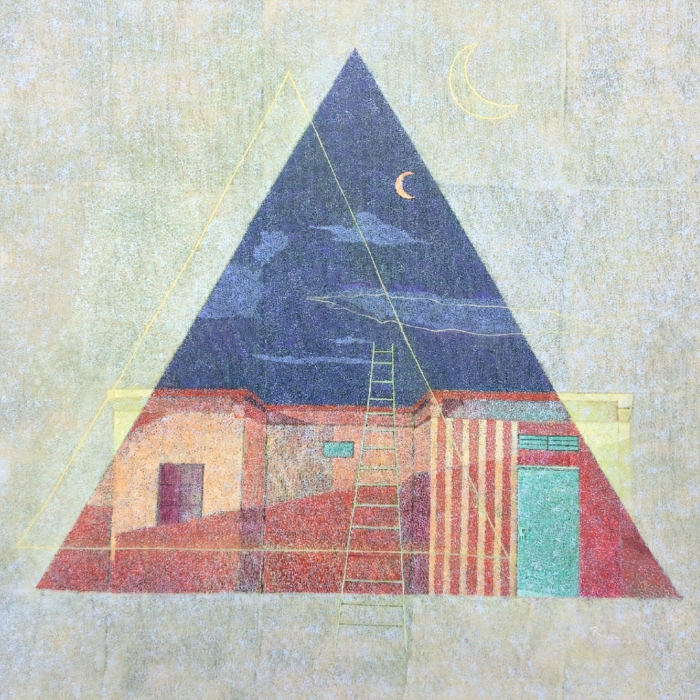 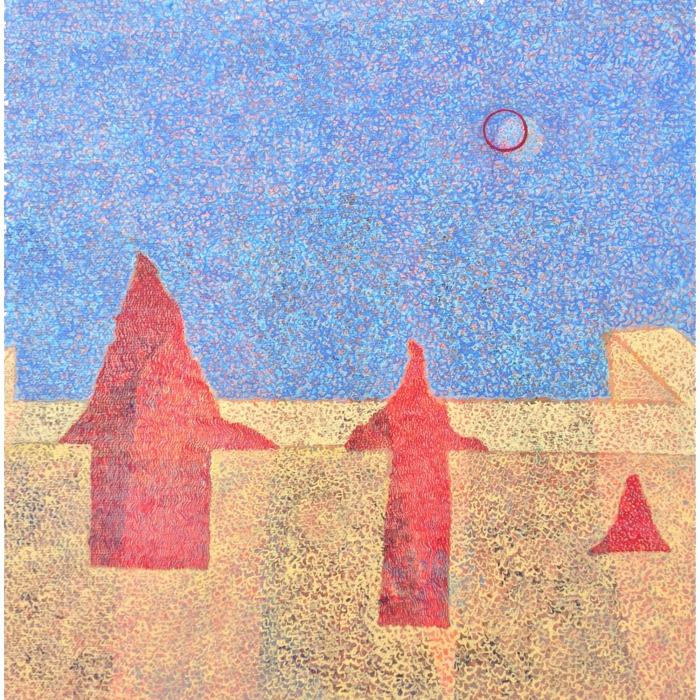 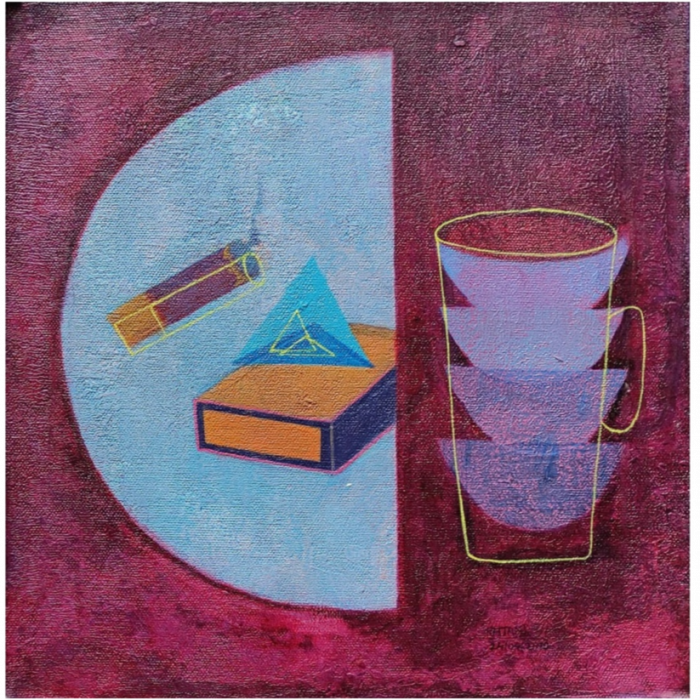 It is one of the most burning issues in the world right now, affecting individuals, communities, cultures, countries and society — migration. And as an artist, Ranjeet Kumar has been deeply and vividly inspired and influence by this phenomenon in most of the art he creates. He dabbles in a range of media, including etching, sculpture, watercolours, charcoal pencil, and more, and chooses to be quite versatile in the kind of art he puts out. He calls it a diversity of exploration on recreating space between two objects or spaces, delving into the psychology of an abandoned space. Moreover, he also highlights that the multifaceted interpretation of his work reflects the everyday rural experience. The haunting, fearsome artwork titled ‘Migrants 1’ is an incredible example of this. The pencil drawing is momentous as well as heartbreaking. Up from a nondescript black travel bag comes the corpse of a man, floating in the air as if ascending to the heavens. There are bugles/trumpets surrounding his humble belongings. His mortal remains see his skeleton, the scaffolding of his body, rearing up and almost out — the length of these bones is created in a way to be like a train, depicting the unforgiving journey of life that takes us to our ultimate destination. Kumar’s versatility is evident when one explores his series of etched plates titled ‘Permanent Migration’. The discolourations of rust or build-up that we typically see on these kitchen implements like cooking bowls, and spoons and plates, have been turned into aesthetic representations of maps and travellers in aerial view, and the journey of migration and life. 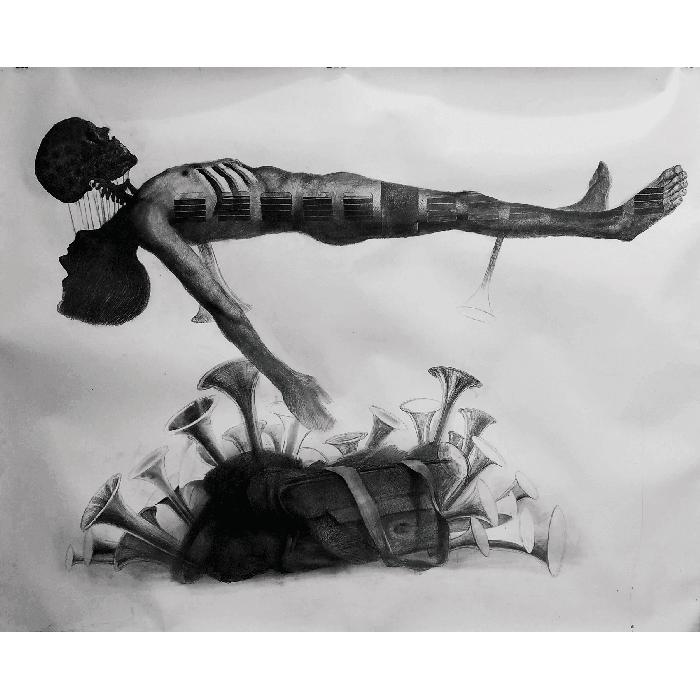 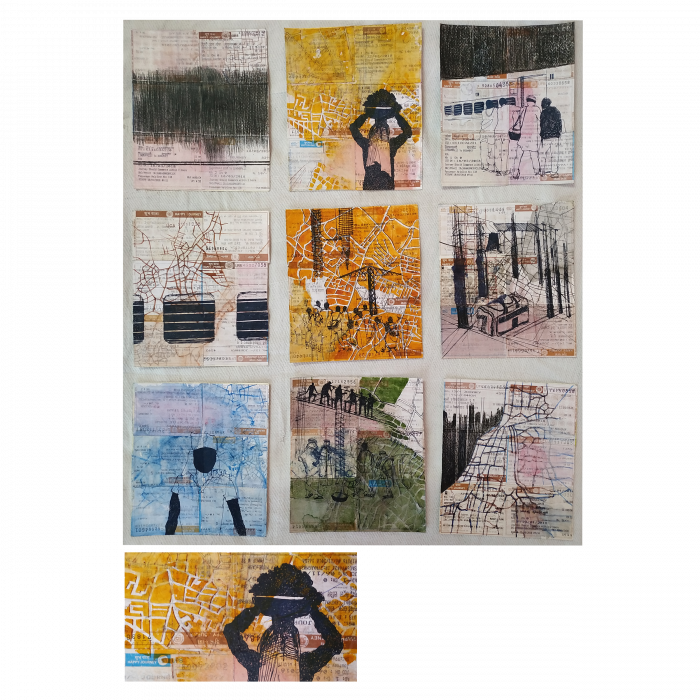 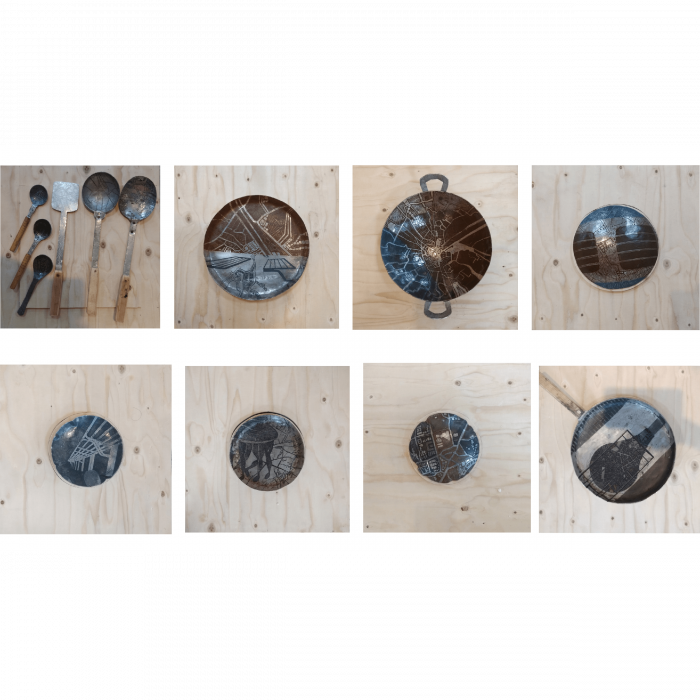 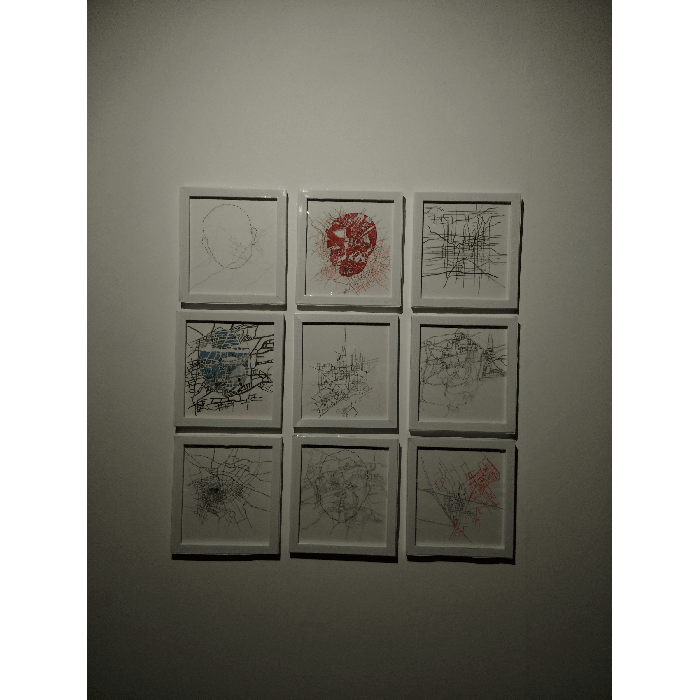 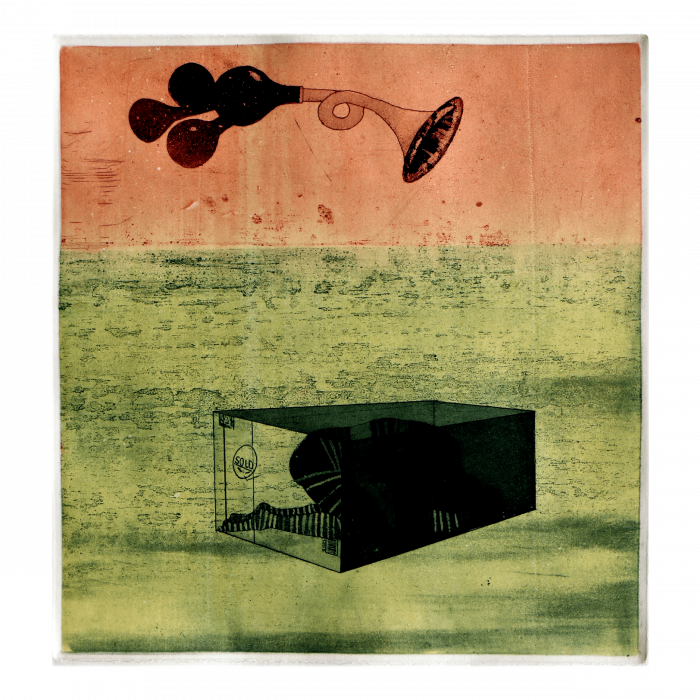 Tarun Sharma: To evoke empathy in the observer

Starkness, poverty, seediness — these are inescapable, uncomfortable and important feelings that are not quite escapable in some of the works created by artist Tarun Sharma. Personal trauma has made him more empathetic, he believes, and there is a strong adherence to being sensitive and observant in the themes that he deploys for his art. He narrates that his seeking of inspiration is grounded and full of effort — he reaches out to people, strangers or not, to listen to their stories. Through this, the extremely important activity of assessing one’s own privilege becomes a more evident need, because his art also aims to function as a tool for social responsibility — making the viewer realize that even the smalles instances of ignorance can generate a growing lack of empathy in society, fuelling despair. An example of the brutal matter-of-factness is the piece titled ‘Men Do Cry’, created using mezzotint print on Hahnemuhle paper. The colours are dark, with only blacks and greys dominating the entire artwork. The depiction is even darker in its essence. The headless figure of a mother sits and blends into train tracks atop rocky debris, cradling a young and innocent naked baby. One way to interpret this commentary is to touch upon the hordes of nameless, homeless persons whose live is eked out in this discomfort and searing impoverishment — nothing separates them from us in their human-ness and existence, other than our privilege. On a different note, Sharma also seems to delve into an exploration of intimacy and its quirks. In ‘Games Of Relationship’, which uses lithography on paper, a seemingly half-naked, exposed man sits wiping his eyes from which tears seem to be flowing, as he cuts onions on a tray in front of him, and seems to be surrounded by millions more of such onions and their peels and pieces, merging into an unending horizon. 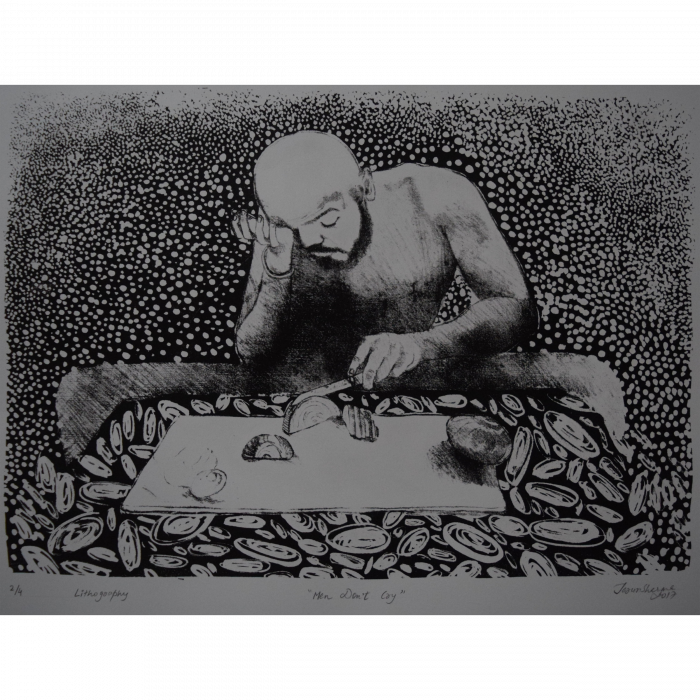 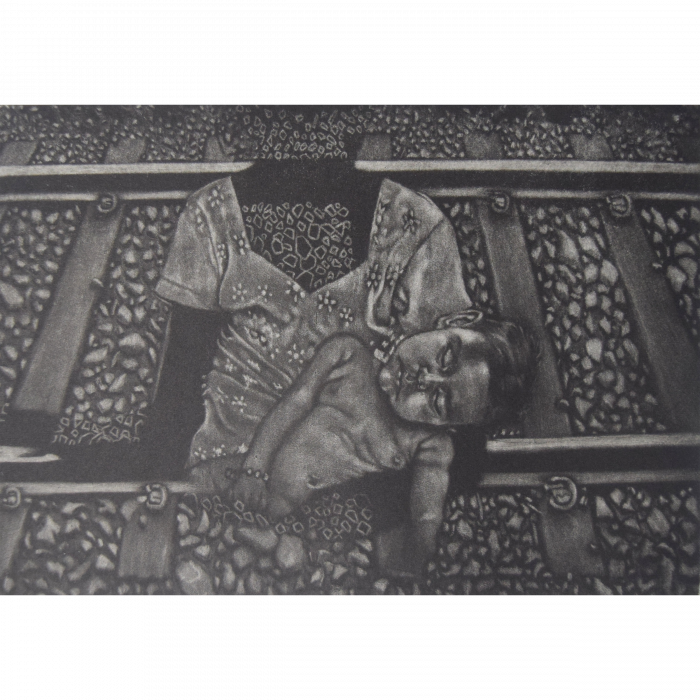 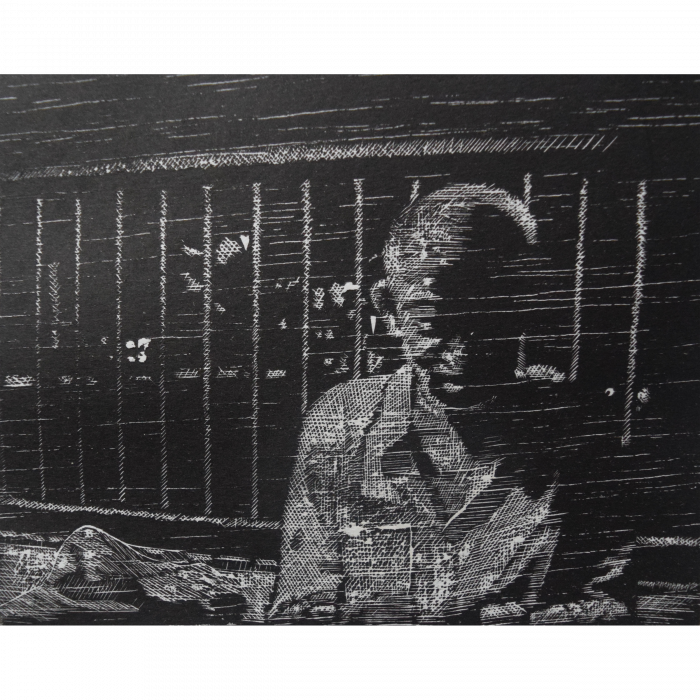 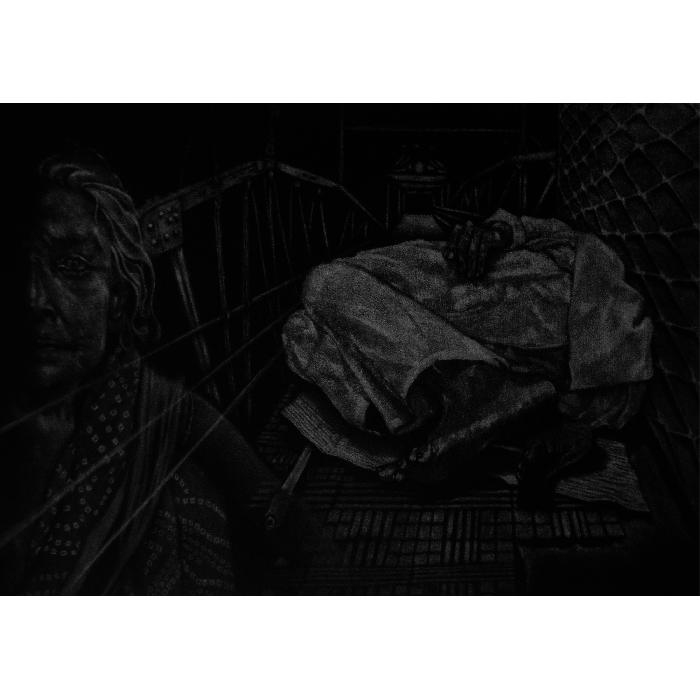 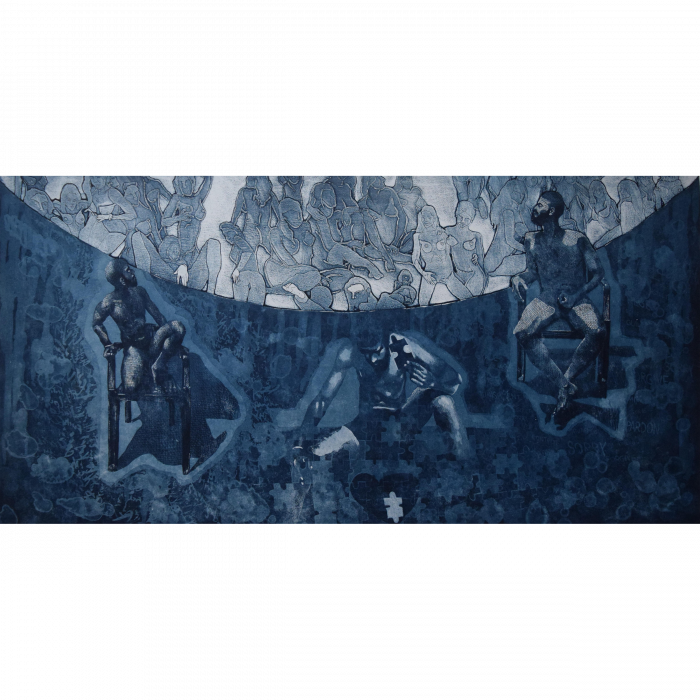