Documenting the End of Documenta

Jason Farago, a critic writing for The New York Times, announced the death of Documenta, Germany’s quinquennial contemporary art exhibition. Kassel, a city in Germany, is the venue for this 100-day-long gigantic exhibition. The first exhibition was held in this non-descript city in post-World War II Germany in 1955. However, the 15th edition has tarnished its legacy and dented its prestige in more ways than one.

An art piece titled “People’s Justice” by an Indonesian collective Taring Padi consisted of a long-painted banner. However, it was removed even before Documenta opened because of its antisemitic imagery that received severe backlash. Germany’s Israel Embassy even referred to it as “Goebbels-style propaganda” in a tweet.

There were numerous early signs that pointed towards a break from the past editions of the exhibition. The 15th edition of Documenta was not curator-led like it had always been. Curiously, this time an Indonesian artist collective named ruangrupa was to organize the whole exhibition. ruangrupa then further invited numerous other art collectives to Documenta who turned it into a collection of lumbung: an Indonesian word referring to rice barns that store surplus harvest for the community.

The German press has not shied away from calling the whole exhibition a failure. However, the English press has been kinder and has even called it remarkable.

Jason Farago, however, expresses his grief in the article and writes that he, “left Kassel depressed and disheartened, less by the art itself (which was pretty uniformly forgettable) than by the indifference it showed to its public and the strange satisfaction it took in being unappreciated.”

That Documenta has a huge influence globally is a truism, this reputation is matched by its hefty budgets for each exhibition. However, this time, the focus was on easygoing and making friends instead of any tough viewing of art.

Antisemitism hung like a dark cloud over the whole of the exhibition. After the show opened, an artwork consisting of brochures from the Palestinian liberation movement depicting imagery such as a woman kicking an Israeli soldier came under attack for antisemitic imagery.

The artists often attempted to clarify and explain that antisemitism was not what they were espousing and that their artworks needed to be understood in the right context. On July 27th 2022, 15 artists and curators expressed their distrust in the supervisory board of the exhibition after the artwork by the Archives of Women’s Struggles in Algeria was removed without their consent or knowledge. They shared a joint statement on E-flux and were quoted saying “This document is important for our project because it traces the history of the struggles of Algerian women in an international context and testifies to the diversity, transnationality and intersectionality of Algerian women’s grassroots political commitments beyond Algeria”.

Later, it was found that the artwork was reinstalled in the exhibition when charges of antisemitism were unfounded. 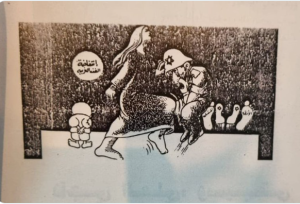 Ruangrupa made the following statement, “While there is a clear reference to the Israeli-Palestinian conflict, there is no imagery of Jews ‘as such.’ The Star of David, while clearly a Jewish symbol, here identifies the Israeli military as part of the state flag,” the statement reads. “The child with his hands behind his back next to the woman kicking the soldier apparently refers to a well-known Palestinian cartoon as a critique of treatment by the military.”

Documenta was marred by scandals. One after the other sucked the life out of it. The last straw, however, was the film series called Tokyo Reels, these were a set of Palestinian propaganda shots on display. The advisory committee called for its removal and some members of the committee called Documenta and ruangrupa antisemitic and anti-Zionist. After an array of accusations, Ruangrupa and participants decided to turn the tables and came out with an open letter and accused the managers and the government of racist agendas.

Perhaps, it is the absence of seriousness and the replacement of the curator with a fun collective-led vibe that ate away the 15th edition of the Documenta from its inside. In its catalogue, the lack of seriousness towards art is evident in the statement that said, “the viewer is obsolete.” If the viewer is obsolete then who is the art exhibition exhibiting for? Is not an exhibition meant for exhibiting to viewers?

When an art exhibition is treated like a hangout spot to vibe then it can only be marred in scandals than in succeeding to create any appreciation or discourse through its art. It is likely that Documenta will find it hard to recover from the black spots that have now blotched its earlier eminent status. When it returns in 2027, the dream of a global show emphasizing a common future may not find space in it. Thus, playing into the hands of the radicals directly and doing the opposite of what this show had always stood for.