Humble and full of enthusiasm to discuss the breadth of her work displayed at a virtual exhibition, Confluence, presented by Goethe-Zentrum Hyderabad in collaboration with Gallery Art & Soul and curated by Lina Vincent, Lalitha Lajmi opens up about how art has kept her going. Gauri Gharpure reports for Abir Pothi.

Drawing recollections on paper during lockdown

Lalitha Lajmi’s latest work, Memory Scroll, happened per chance because of the lockdown. Initially she could not adjust to the idea that she could not go out or meet people. “I have my studio in the garage, we stay on the third floor, and I was about to start an oil painting when the lockdown happened. Now, I couldn’t get back to it and I felt annoyed at myself thinking all sorts of thoughts like why did I not start it earlier, why did I not finish the painting earlier.”

In between her two works, she says, there is a lot of gap but even though she is not continuously painting, she keeps thinking about ideas and materializes them with fluid interpretations when she gets back to the brush. This is how, out of the introspection brought about by the pandemic, Memory Scroll took shape. “I just thought let me pull out those Japanese Rice Paper Rolls that I have. It was given to me by my cousin’s husband. I had never come to use those till the lockdown because I have such a busy life etching and painting,” Lajmi says. For her water colour paintings she uses very thick paper, 600 gsm, because she washes and takes the colour out once or twice and uses several coats of colours. Working with the rice paper rolls called for a change in technique that Lajmi quickly envisioned.

Creativity begins in the womb 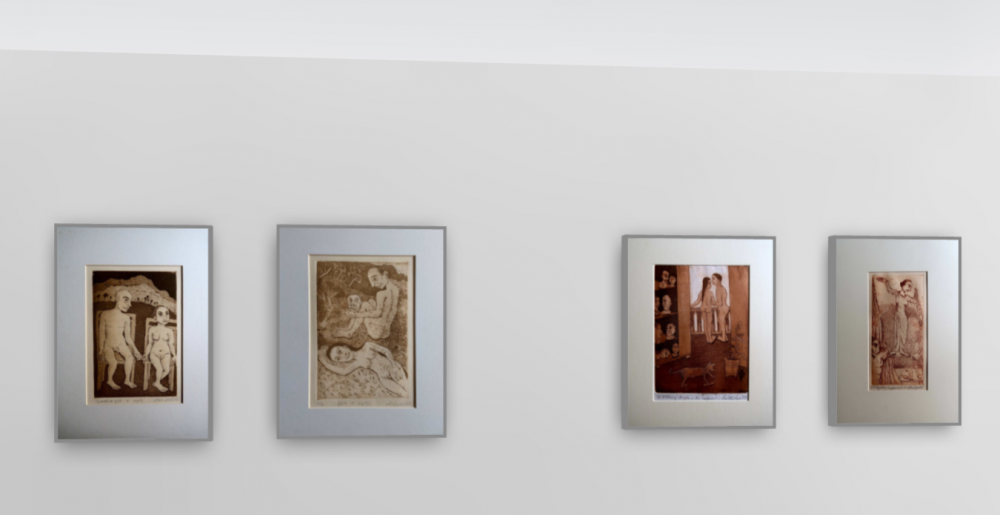 On the centre of the paper there were beautiful oval marks like tea stains and she thought of incorporating these marks in the drawings using brown pencils. “Recently I have begun to work only on two colours, brown and black.” Most of the drawing depict the growth of a foetus and symbolize the circle of life, replete with its ups and downs. “Many years ago, when I had gone to meet my son and daughter-in-law, their daughter was small and in her school books I had seen these pictures and had noted them in my sketchbook. During the pandemic, I went back to those drawings and transferred the ideas on the rice roll. Later, someone asked me how the idea came about. How it happens I don’t know. I thought all are born with certain traits and I believe art is born in the womb itself and that is where our creativity begins. It is not that creativity is given by God only to some people. Actually, everybody has some kind of creativity.”

Celebrating spontaneity through her work

Lajmi says she had not considered showing her work on the rice paper rolls to anyone. “I was doing it as a diary for myself,” she says. When Art & Soul Gallery requested her to send some pictures of her latest work, she sent photos of what came to be the Memory Roll and the gallery was thrilled. Lajmi herself is upbeat with the kind of response the exhibition is getting and with the concept of a virtual exhibition that she has participated in for the first time.

“Senior painters from Baroda, Nilima Sheikh and her husband Ghulam Sheikh, who used to teach the History of Art at MS University, sent an email about what they felt about the work. Nilima’s work is fine and so beautiful , very transparent kind of work. Also, Nalini contacted me. And I thought all these years I have been painting and etching but nobody has given me this personal kind of a response. I think the images in my mind have come out spontaneously and others have appreciated that spontaneity.” She is also happy that at this age, even though her hand otherwise shakes, whenever she holds the brush she can draw a fine line in one stroke. “I use the pencil or the brush in one line. Very few people have noticed,” she shares. “For etching, you need to have a firm hand and have to be very good at drawing because you cannot afford to make mistakes. Like with everything else, such as writing or poetry, you need to work on your art every day. Now a days they use this term ‘arts practice.’ This is actually what it means, what you do day after day. Consistency is very important.”

Associate Curator of the show, Lina Vincent, says that Lajmi is such an open person, full of humility, that it is a delight to work with her. “Her work is not premeditated. It is fluid. That evocativeness is what I respond to. Her work touches you at an emotional level. I do not want to weigh it down with jargon and words. I feel extremely privileged to have put this together,” Vincent says. Lajmi’s elaboration on her own process concurs with Vincent’s observations. “All of us have an inner eye and inner thoughts. In my case, I am self-taught, and I believe in spontaneity in my work. When I see the paper or the canvas I begin straightaway. I don’t know what exactly what I will be doing. Something goes on in my mind for a few days and then I start,” Lajmi says.

Finding creative expression took time. When she first began learning etching at the evening school at J J School of Arts, she says she didn’t quite know what subjects to choose. However, she was certain that she did not want to do something abstract. Along with learning etching, she was also doing oil paintings on tantric art; it was a time when she was reading a lot on tantric work and symbols. “I thought let me start with the seed because the seed is very important and I did large oil drawings on the seed series. A professor from Tata Institute of Fundamental Research saw the show and he liked me work. I was trying to move from the form to the formless.  I did that whole exhibition but I was not happy. Then I did another exhibition called Moving Squares. There also the Tatas came and bought one of the works. But I was not happy.”

“There was confusion in my mind. I had lost my brother Guru Dutt and we felt the loss very badly. The way I was brought up in Matunga where the six of us shared a two-room flat… It was a very difficult time when I grew up with my parents who were struggling all the time. And that is when I got married. He was settled and he was the first person my family saw,” she shares. She was feeling terribly lonely when one of her friends suggested that she consult a psychoanalyst. Though initially shy, because she always thought talking about personal matters becomes gossip, she eventually started seeing a therapist. “For the first few sessions I was weeping and could not speak at all. After a month or two I started speaking up. Then, I started having dreams and those dreams were so clear! I went back to the time I was born. I was going back to my mother breastfeeding me. It was amazing, those images. Somehow those images must have stuck,” she says.

We all wear masks to hide who we are

Upon seeing her works, one gets the impression that Lajmi profusely uses art to probe relationship dynamics. When asked about this, she reveals how some of the series of paintings have developed from an emotional and an aesthetic standpoint. “I always thought we as a society put on masks. I felt we all were acting in a way. We always wear masks whether we go for work or to meet friends or dear ones, there is a certain kind of a mask you put on. We hide ourselves and one part of us is always kept inside and is never revealed. At the time, my daughter (the late film director Kalpana Lajmi) was also doing theatre. In school and college, she was excellent in dramas and elocution and she entered semi-commercial plays and I used to attend her rehearsals. Somewhere, all this put together, I started getting the image of masks and that is what became my obsession. I began doing the masks in the evening at J J School, I began etching only masks. I used to draw the masks in water colours, pencils, even oil paints. I retained these masks even with human beings.”

When asked her if she has faced any gender biases, she gives a nervous laugh and says that it is “very much there and will be there I suppose.”  Whether you see Western art or Indian art, she says, you will see the male is always pushed in front and given all the opportunities to do well. “When I started painting, 1961 I think, women were in their boundaries. Specially in 1965 I had a series called Women in Boundaries when they were within peripheries, with doors shut.” Lajmi drew a series of women interacting with one another in the nude. While it “shocked” most viewers who could not relate to the idea of such freedom, Lajmi says that she was honoured to be offered to exhibit the series in New Delhi. “At that time these commercial galleries in Bombay were not accepting my work because I was not a commercially successful artist. Most painters, when they paint, they also repeat themselves. Repetition is accepted in our society. To give an example, in singing we repeat the line. I thought I am not going to repeat my work,” she recalls.

She also draws attention to the inequality by citing the poor pay given to the models who pose for figurative drawing classes at art schools. “Someone suggested that I get models from J J School. These models are so poor, they wait in a line and they are paid so little. I saw all that and I was feeling sad. In many areas things have not improved in India when it comes to paying salaries. It is now that people are becoming aware,” Lajmi says. Whether she gets back to the oil painting she was about to start before the pandemic hit or continue with her pencil sketches, one thing is certain: At 88, Lajmi is determined to surge ahead and find new inspiration along the way.

The virtual exhibition, Confluence, can be viewed at tinyurl.com/confluencegzh till September 18

You can also read our article on the exhibition, Confluence, here.