Delve into patterns and paradoxes, journey inwards or dance with light: That’s our Artists Of The Week

Home / Artists of the Week / Delve into patterns and paradoxes, journey inwards or dance with light: That’s our Artists Of The Week
July 27, 2021July 27, 2021

Baishakhi Mehatori: As the mind interacts with the elements

There is something infinitely spiritual about the artistic renderings put forth by Baisakhi Mehatori — who professes that she has always been exploring the depths of the human mind and behaviour in her works. Using acrylic colours to accomplish cohesive, stirring canvases, this is the inspiration she taps into, to transcend her art into a metaphor for the journey of life. In essence, however, it chronicles the deep emotional state of a person, and their interaction with their surrounding space and time. Let’s take a look at ‘Hands’ — eye-catching shades of blue meld into one another as a shapely human form dominates the centerpiece of the frame, interacting at various levels with the disembodied hands that enter the space and surround it. The human body is wrought in patterns, which are notably different and more delicate and complex where its brain is supposed to be — the encircling limbs are either engaging directly in a handshake, or asking a question, or holding up a mirror; there is also a suggestion of puppeteering taking place amongst some of them, as strings enter and leave the borders of the artwork. In ‘Holding identity’ on the other hand, there is a more sombre, yet warmer tone; dull hues of red, pink and yellow are splashed across, with a human shape crouched almost foetus-like in an encircling ‘womb’-like receptacle. The body appears to be holding on to chains as it squats, and has covered its face with a cloth hood, facing away from the viewer. 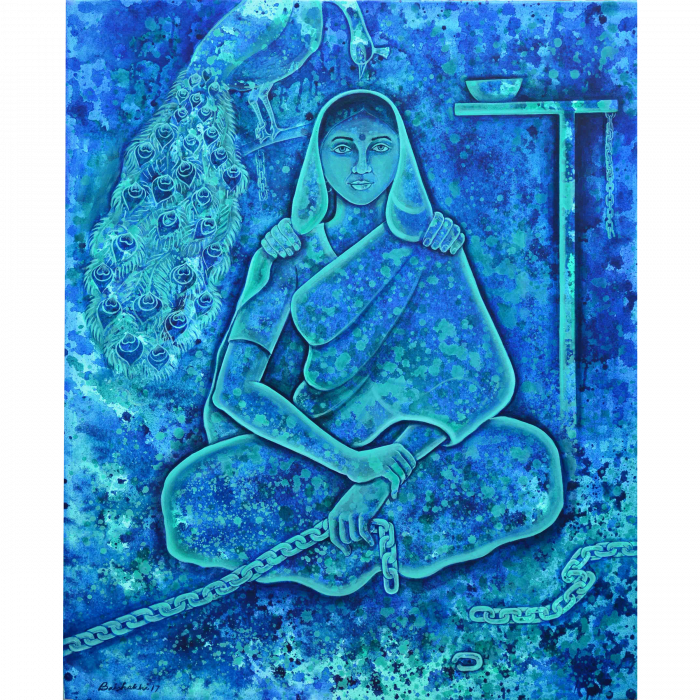 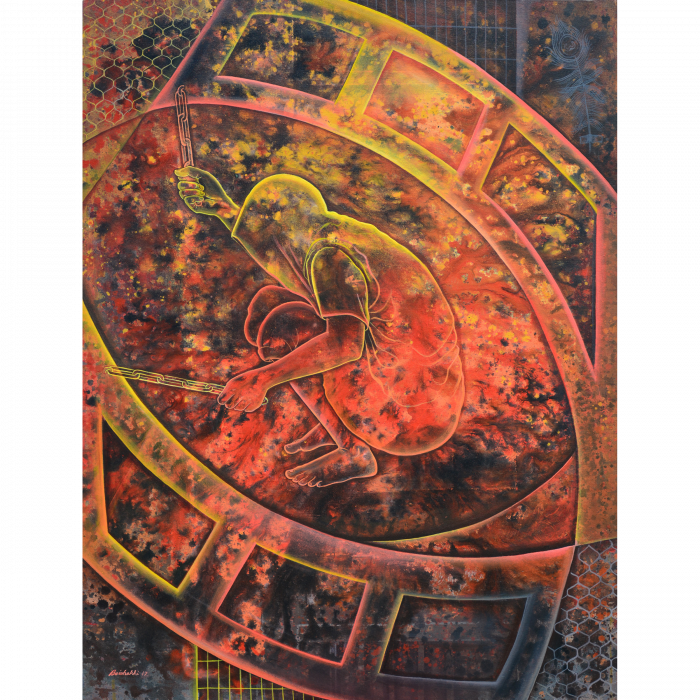 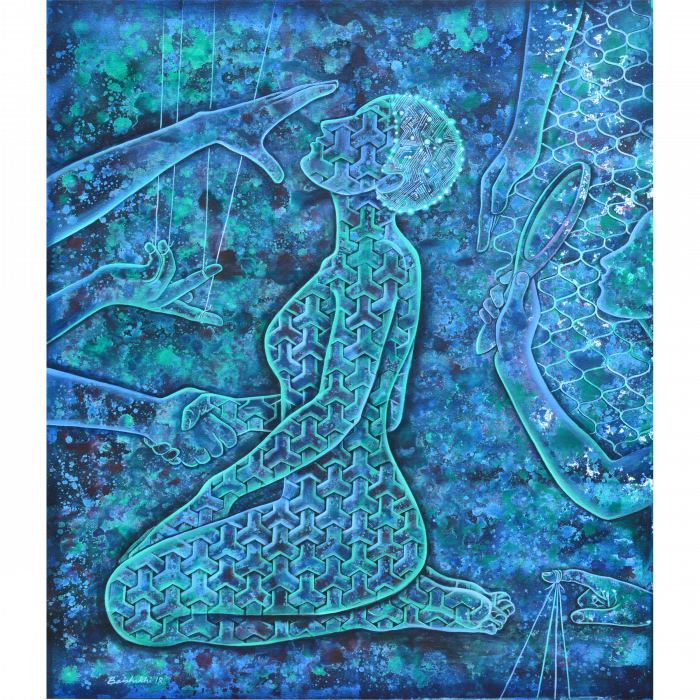 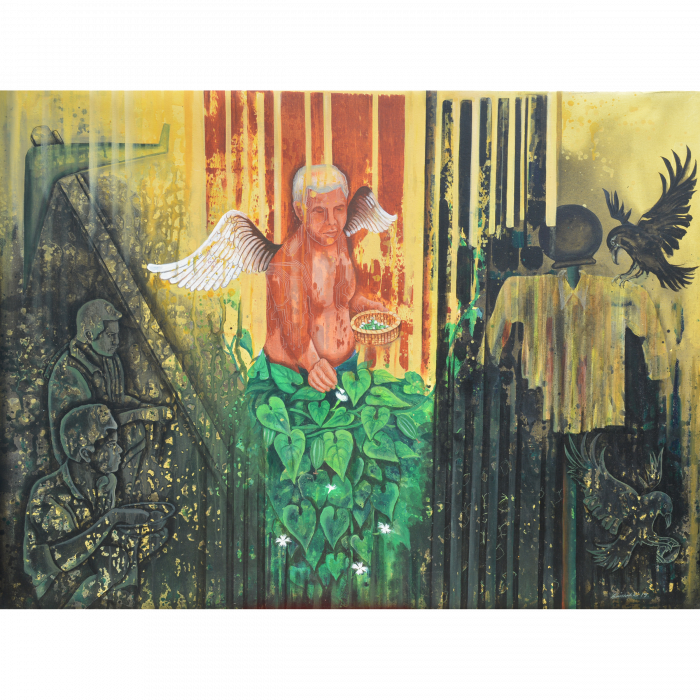 Bhavesh Zala: When light and colour dance as one

Representing high complexity with simplicity is a fait accompli for artist Bhavesh Zala, who brilliantly captures one of the most elusive qualities of landscape painting as it dances through the frame — light. In his works, the interplay of light and shadow produces a chiaroscuro effect and draws in a viewer with ease. A plein-air artist, he works extensively with watercolours and aims to expose aesthetically hidden spaces, whether these be in the city or the countryside. Take for instance the piece titled ‘Prayer’. The sheer vibrancy comes through in the strong, sure and bold use of dark pink across the frame, patched throughout with splashes of blue, light and dark. In the foreground stands a middle-aged woman in traditional Indian clothing, expertly drawn, who seems to be emptying a kalash for a ritual of sorts, the stream of water further coalescing into the blurred beauty of the painting. Elsewhere, in ‘Colors are raining’, there is an onslaught on the senses of impressionist magic in how the colours are brightly and definitively used, bleeding into each other and yet creating a defined sense of shape and form — the simple depiction of a street lined with old town quarter buildings. 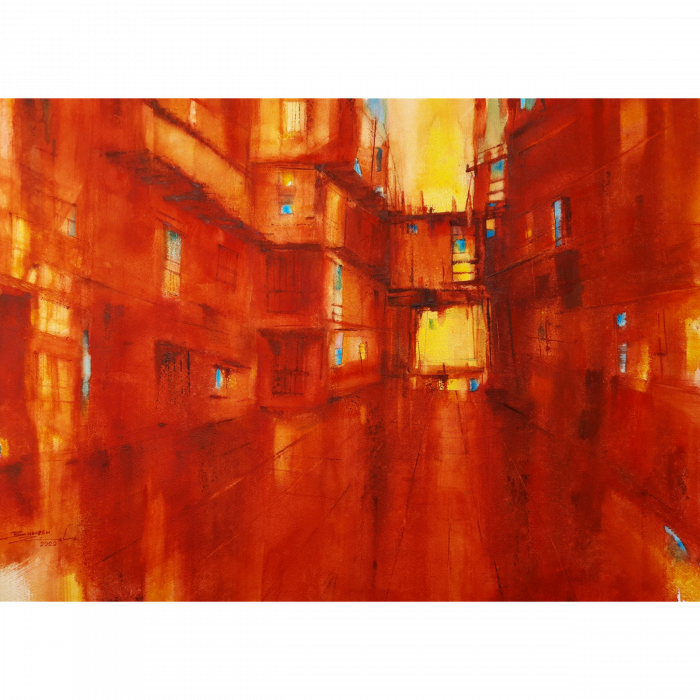 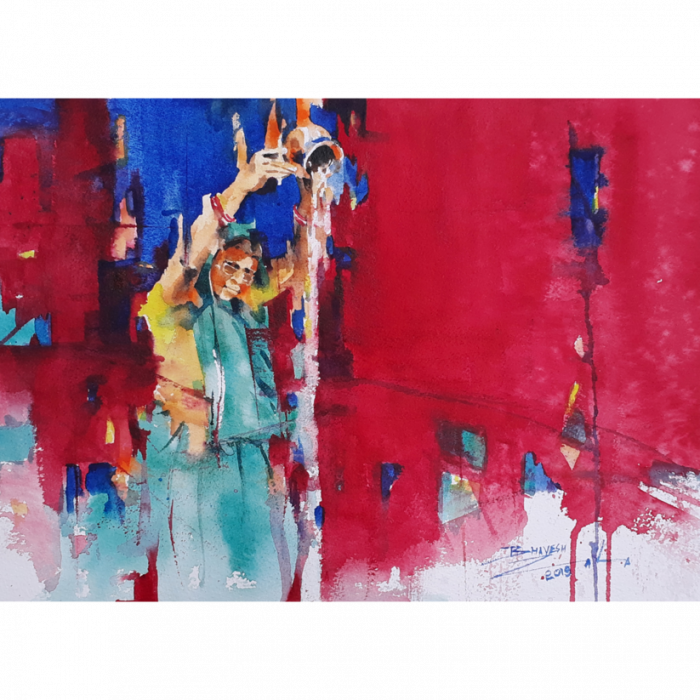 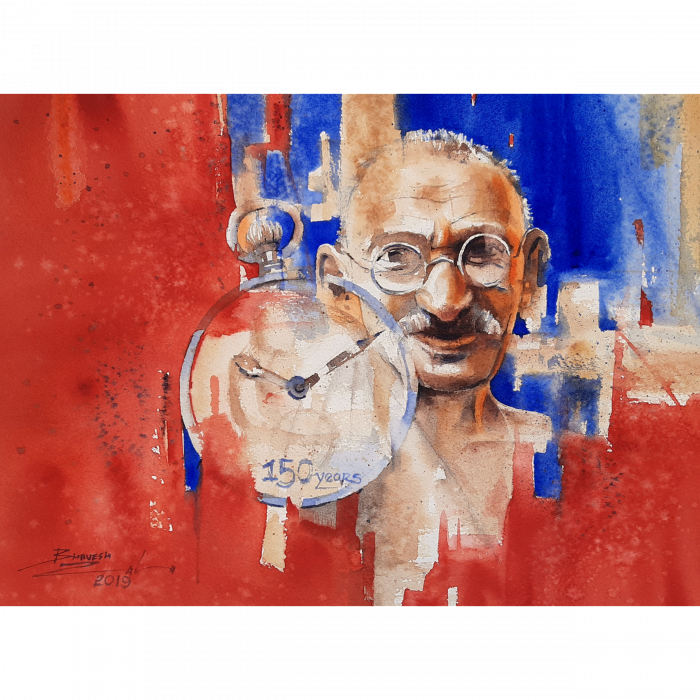 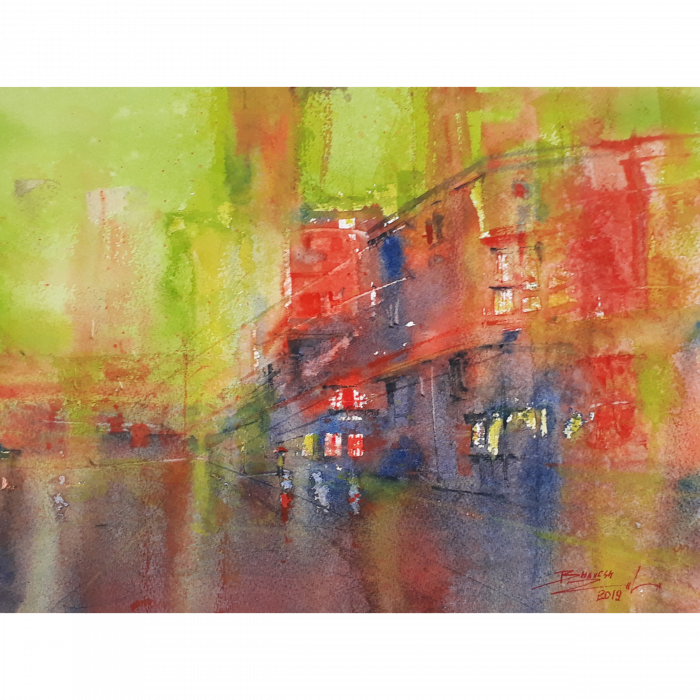 The wonder of structural patterns that surround us everywhere in the world form a basis for the artist in Chetan Mevada. These combinations of lines, spaces, forms, colors, and more meld with the human anatomy, man-made objects, natural elements, aerial views of land, etc. in his works — and in turn also activate psychological structural patterns in the viewer, he feels, which can be mesmerizing from the aesthetic point of view. These repetitive patterns juxtapose beautifully with colours and forms in lithographs, such as in ‘Urban Farm’, where a cityscape and the open blue skies above coalesce into one another in the form of hexagonal shapes, perhaps commenting on the ultimate seamlessness of existence and our world. The only standout element in the foreground of the piece is a tall black post arraigned with gadgetry; the rest is a light wash of hues of blue, with its patterned nature adding almost a glimmering surface to how it appears. Another level of experimentation that Mevada takes on is cutting the canvas itself, which adds an illusionary level to the entire framework. This can be seen in ‘Elephant’ — varying patterns and symmetries are arranged in a manner that depicts a familiar symbolic shape of the mighty pachyderm. 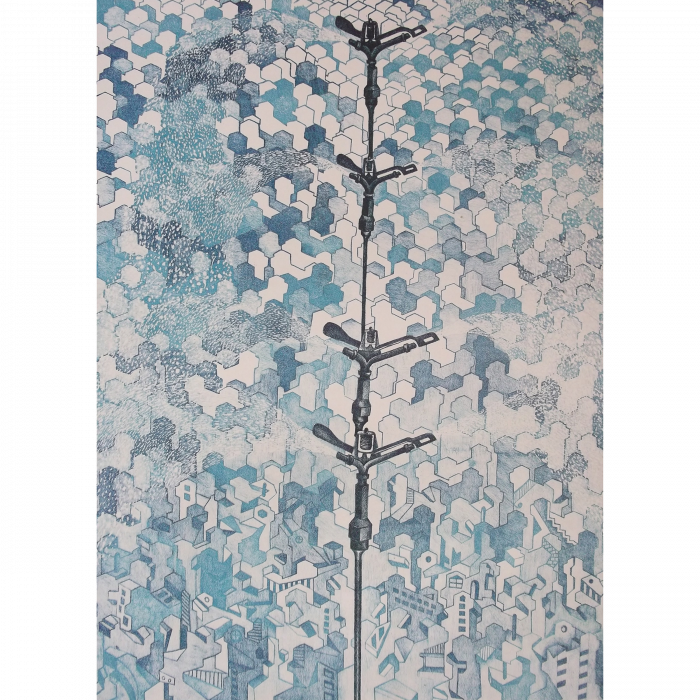 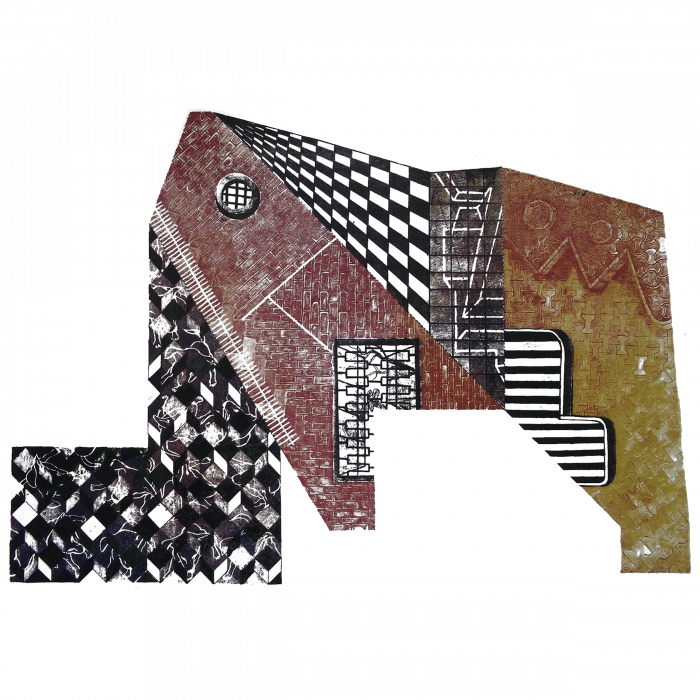 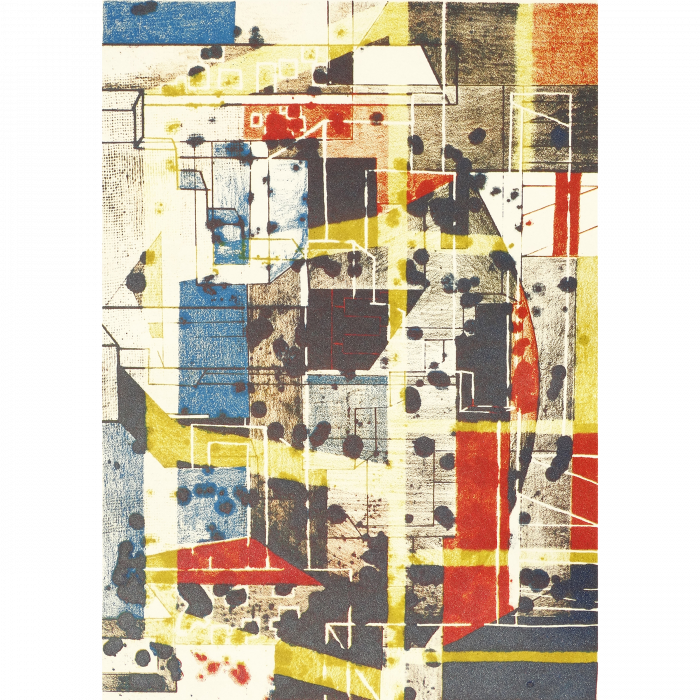 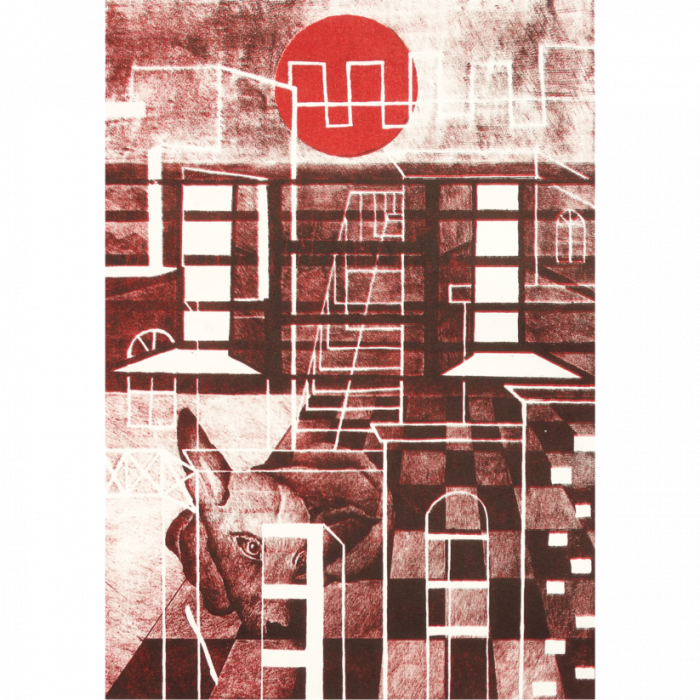 Krunal Kahar: An experiment of sizes

Juxtapose the largest terrestrial being with one of the smallest — elephants and ants. This paradox of scale and much else, and yet the assurance of a common thread binding it all is what fascinates Krunal Krahar as an artist. The solidarity and team work shown by both animal groups joins them, although their sizes and forms vary wildly. But besides this aspect of relativity, Krunal also professes to exploring themes of cohesion in depletion, offsetting multiple variations of a particular form with just a solitary one of another. He primarily dabbles in mediums of wood, stone, brass and other metals. There is an element of quirk, humour, fantasy and wonderment to his creations. Like in the piece titled ‘Alone but not lonely’, for example, there is an exquisitely filigreed leaf that extends almost like an open palm, upon which is seated a tiny, metal elephant, poised almost as if caught unawares and about to run, to some viewers’ perception. Another interesting work of his is called ‘Cohesion In Depletion’ — here, scores of tiny elephant figurines imitate the existence of ants, swarming over what are positioned to be artistic leaves, perhaps in an upside down dimension! 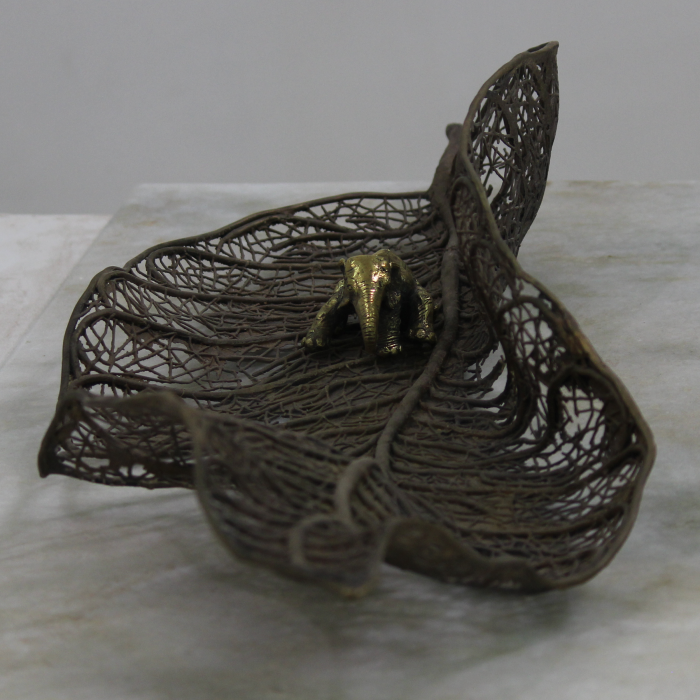 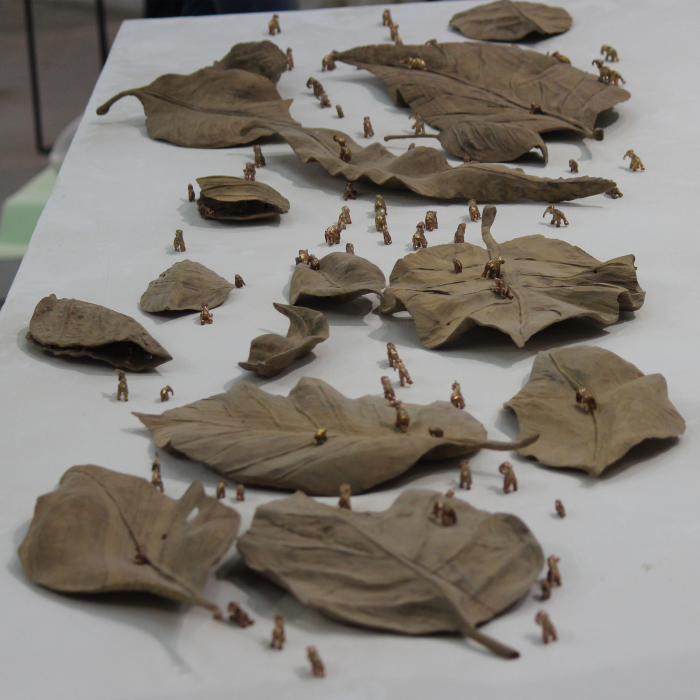 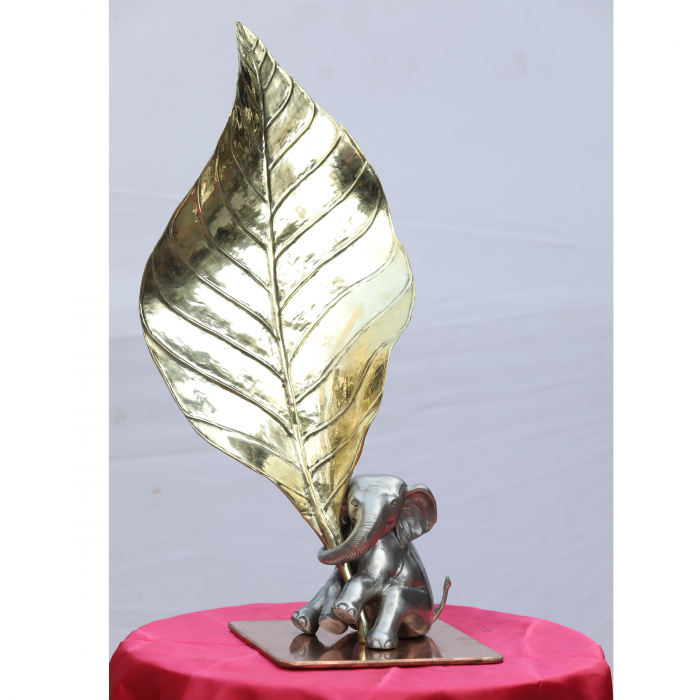 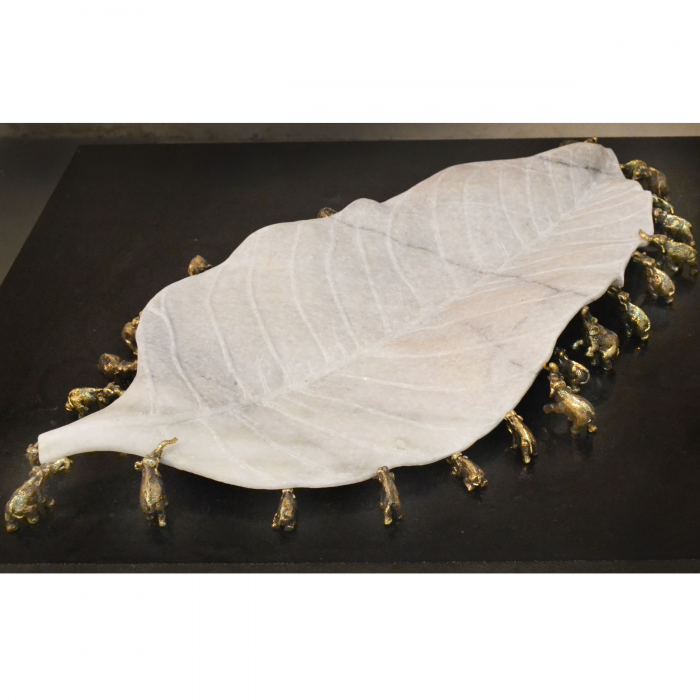