One of Britain’s most influential artists turns 84 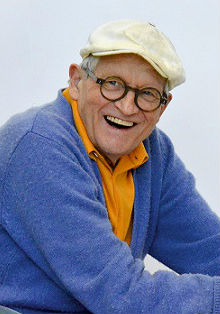 Considered one of the most influential British artists of the 20th century, David Hockney celebrates his 84th birthday today. Born on July 9, 1937, the Englishman has been a painter, draftsman, printmaker, stage designer, and photographer, and used many other media including a fax machine, paper pulp, computer applications and iPad drawing programs. The subject matter of interest ranges from still life to landscapes, portraits of friends, his dogs, and stage designs including for the Metropolitan Opera in New York City.

Hockney is notable for his contribution to the 1960s pop art movement. Interestingly, it was at the Royal College of Art that Hockney featured in the exhibition Young Contemporaries that announced the arrival of British Pop art. His early works display expressionist elements, similar to some works by Francis Bacon.

When the RCA said it would not let him graduate if he did not complete an assignment of a life drawing of a female model in 1962, Hockney painted Life Painting for a Diploma in protest. Copies of the drawing exist in the collections of Tate and the V&A. He had refused to write an essay required for the final examination, saying he should be assessed solely on his artworks. Recognising his talent and growing reputation, the RCA changed its regulations and awarded the diploma.

On November 15, 2018, Hockney’s 1972 work Portrait of an Artist (Pool with Two Figures) sold at Christie’s auction house in New York City for $90 million (£70 million), becoming the most expensive artwork by a living artist sold at auction. He held this record until 15 May 2019, Jeff Koons reclaimed the honour when his Rabbit sold for more than $91 million at Christie’s in New York.

Hockney is gay and has explored the nature of gay love in his portraiture. Sometimes, as in We Two Boys Together Clinging (1961), named after a poem by Walt Whitman, the works refer to his love for men.

Hockney has synaesthetic associations between sound, colour and shape, and has been partially deaf for over 40 years. He can only hear with the help of powerful hearing aids, which he has in several different colours.

Hockney once even devoted an entire exhibition to his paintings of daschunds. Shown at Salts Mill in Saltaire in 1995, it consisted of 45 portraits of his two dogs, Stanley and Boodgie.

He had declined the offer of a Knighthood in 1990, and said he turned it down as he ‘does not care for a fuss’. He was subsequently appointed to the Queen’s Order of Merit in 2012.

His autobiography, A Bigger Book, weighs 35kg. It has been described by Hockney as his ‘autobiography in pictures’, and measures 200cm in width at full spread and is 500 pages thick. On its release in 2016, The Guardian reported the volume to be ‘as heavy as an armchair’.

Find out how ‘Young Lucknow’ artists are blossoming in the erstwhile city of nawabsThe Da Vinci ode! (That’s pretty much the news of the day)