“I am interested in surprises from my art,” says Manjunath Kamath, a man of many mediums

Temple sculptures and paintings, churches, and Jain temples were his initial museums from which he derived his fascination for the arts, says Manjunath Kamath. As a child, he used to collect small terracotta sculptures and paintings and try to copy those. “I wanted to capture the feeling of those images. For example, when a particular statue is worshipped in a temple, it does not remain just a statue. It becomes a living entity. As a child, I used to go to temples on occasions when they ornamented or removed the ornaments of deities and found special joy in witnessing the activity. I used to also frequent idol makers, who made Ganesha or Durga sculptures and learned from them. I can say that they were my first teachers,” shares Kamath about his initiation into the art field.

When he started pursuing his Bachelors in Fine Arts in Mysore, he was initially hesitant about the idea of choosing a major. He did not want to limit his skill-set or get bracketed into a category. So, even though he opted to study sculpture, with the encouragement and support of his teacher, he used to frequent all the departments and gain learning from them. “One week I used to spend with the painting department, the next, I would spend studying printmaking. I also had an interest in traditional art forms and spent time learning the same. That is how I developed the facility to work with a range of media,” Kamath says.

Upon graduation, Kamath left for Delhi. The initial plan was to join the arts college for his postgraduate degree but Kamath figured he did not want to go through with the usual route of completing one degree after the other and decided to take a break. That is when his stint with The Economic Times as an Illustrator materialized. During his time there, he gained a solid grasp on digital media thanks to supportive seniors. “I would finish office work by 9:30 and would have the whole night to myself to work on my art and learn new software. That time, few options were available, Photoshop and Painter. My Design Manager was fully cooperative and allowed me to experiment with my own work. I can safely say that The Economic Times was my MFA!” reminisces Kamath.

With another medium added to his skill-set, Kamath ventured truly into the world of art and started creating a fascinating range of works with a fresh perspective of storytelling and imagery. He says his inspirations were stories that people were already familiar with, such as the folklores his grandmother told him about, or events from Panchatantra. He said he left just enough clues for the viewer to form their own narratives yet incorporated enough mystery to keep them guessing. His passion to involve the viewer into his works led to often humorous, contradictory, and fragmented visuals that rapidly caught the fancy of the audience. “It is not just the artist who has to think. The viewer needs to think too!” Kamath sums up his philosophy. 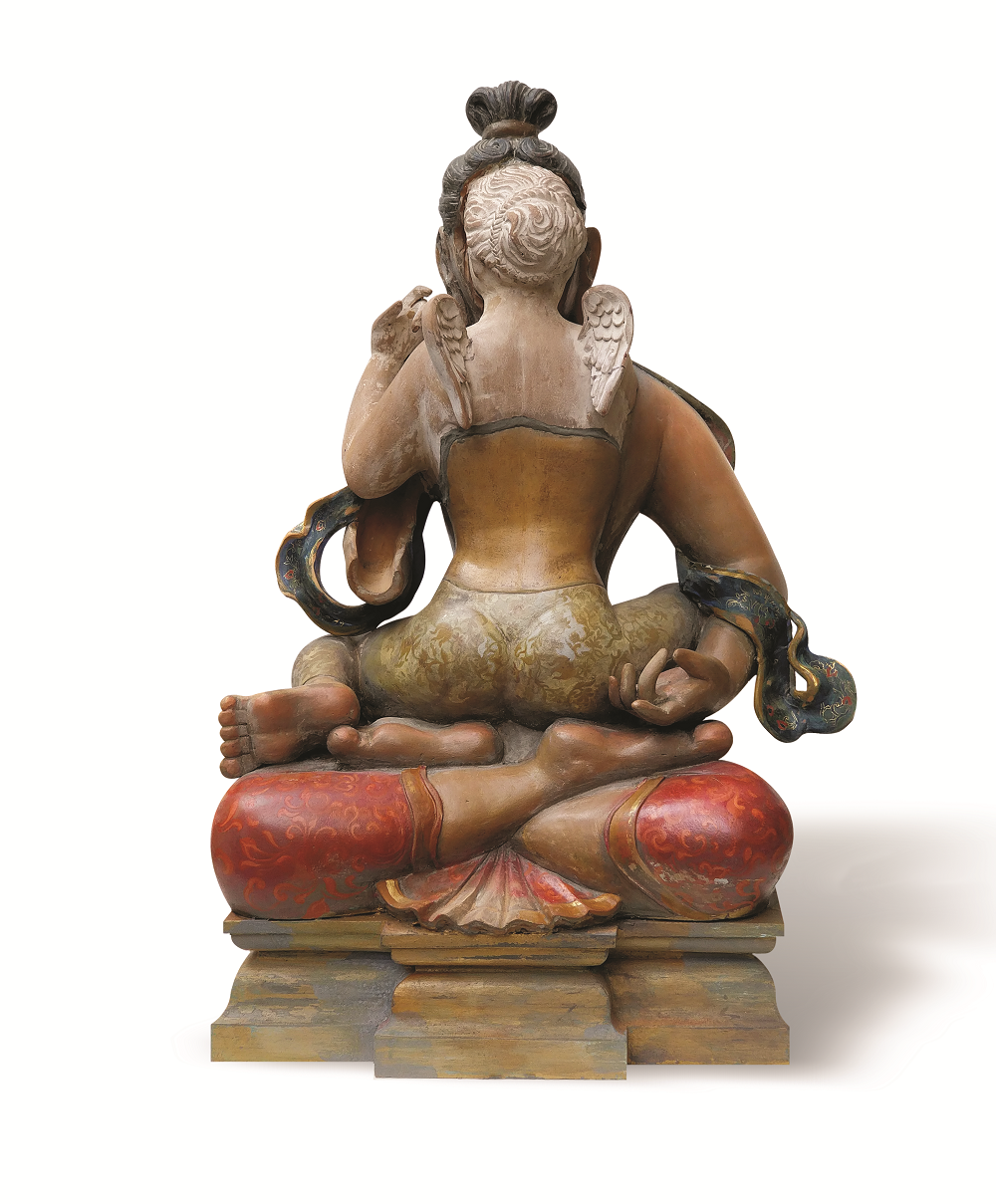 His initial works, with traditional iconography, cultural references, a generous dose of humour with donkeys and other animals pictured in the frames, were all about storytelling. With a playful provocativeness for the viewer to piece together fragmented imageries, Kamath offered a humorous platter for those with a keen eye in his early tenure. He says that a certain amount of stupidity is necessary to enjoy and create art. “With humour, one can say anything. Humour can soften the blow.” The same things spoken with anger, if conveyed through humour are more palatable, enjoyable even, believes Kamath and this philosophy was quite evident in his early works where even characters such as Mulla Naseeruddin made their way into the visual storytelling. 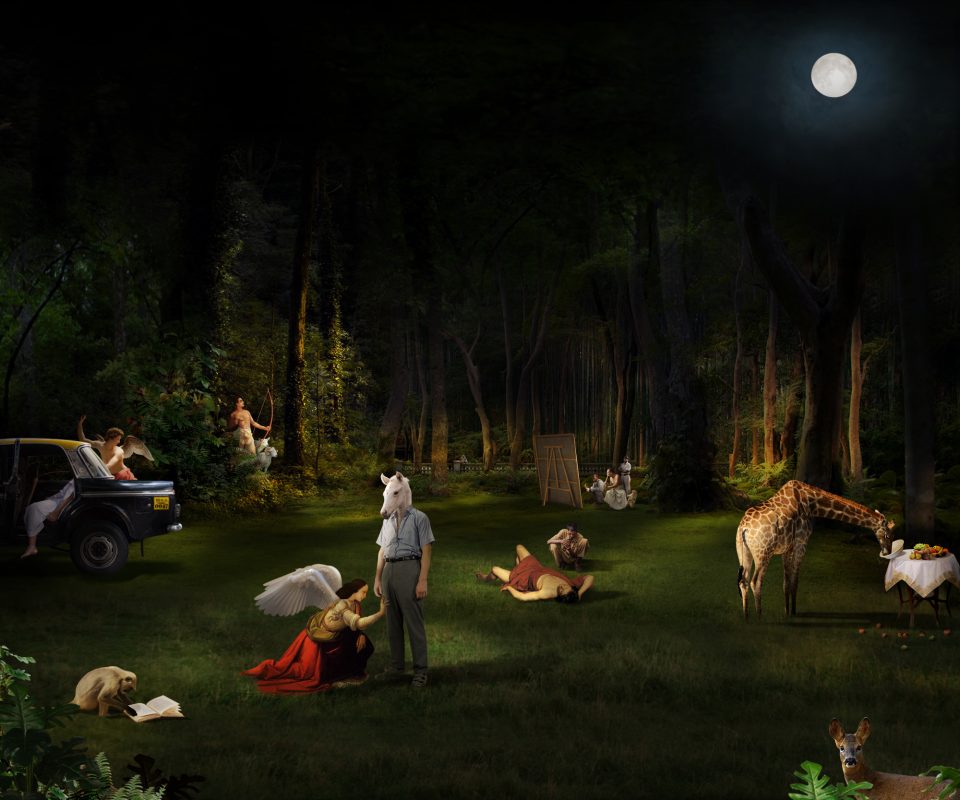 In his previous works, the imagery of animals – particularly that of the donkey – was also very strong. Kamath narrates how he first came across the idea of using donkeys when, while travelling to Mysore, he came across posters of a pair of donkeys with garlands at every other house. On inquiring about the whimsical posters, he was told that people consider donkeys auspicious and keep these posters for luck. Kamath elaborates on the idea: “In every society, animals play an important role. Already donkeys are imposed with too many ideas in children’s stories but in another context, they became auspicious. Then, I began treating animals by imposing different meanings on them. I do not reveal my connotations to the viewer because every human being is full of references and ideas. They have their ideas that come with their experience. These animals are kind of a key to enter into my work.”

Today, Kamath is slowly moving towards abstraction and giving the viewer a bigger landscape to play with their interpretations. “After a point, drawing the same things over and over again becomes a part of your muscle memory. There is no challenge. And the highest point of storytelling eventually becomes an illustration. I started questioning myself and thought if storytelling is essential in the first place? I do not believe that art can change the world. At my initial stage itself I realized that it would be foolish if I believed so. There are stronger mediums to do that, such as films,” Kamath says. “I am creating something, people are liking it, buying it. Then it becomes as similar as a job, about demand and supply. Then I began thinking about exactly what I wanted to do. I am not saying there was a sudden change in my work. But, gradually I realized if you want to tell a story, it can also be more abstract.”

Kamath says he slowly realized that not everything comes with a meaning. “I am interested in surprises from my art. It is just there for the sake of it,” he says. Similarly, he began playing with images that had a strong reference to him, such as Raja Ravi Varma’s paintings, renaissance paintings and others and put them together to make them play a new role in his paintings. Certain kinds of characters gave certain glimpses to the audience, he says, but they did not remain the original roles they portrayed.  “I feel like a play director.” For his terracota sculptures, he is more fascinated by the inner part, the hollow. So, he has tried to depict the same with broken pieces that give a glimpse of the emptiness inside that essentially holds the structure together. He likens the invisible vacuum to the lifeforce of the body and to emotions that dominate our lives without being overtly seen. 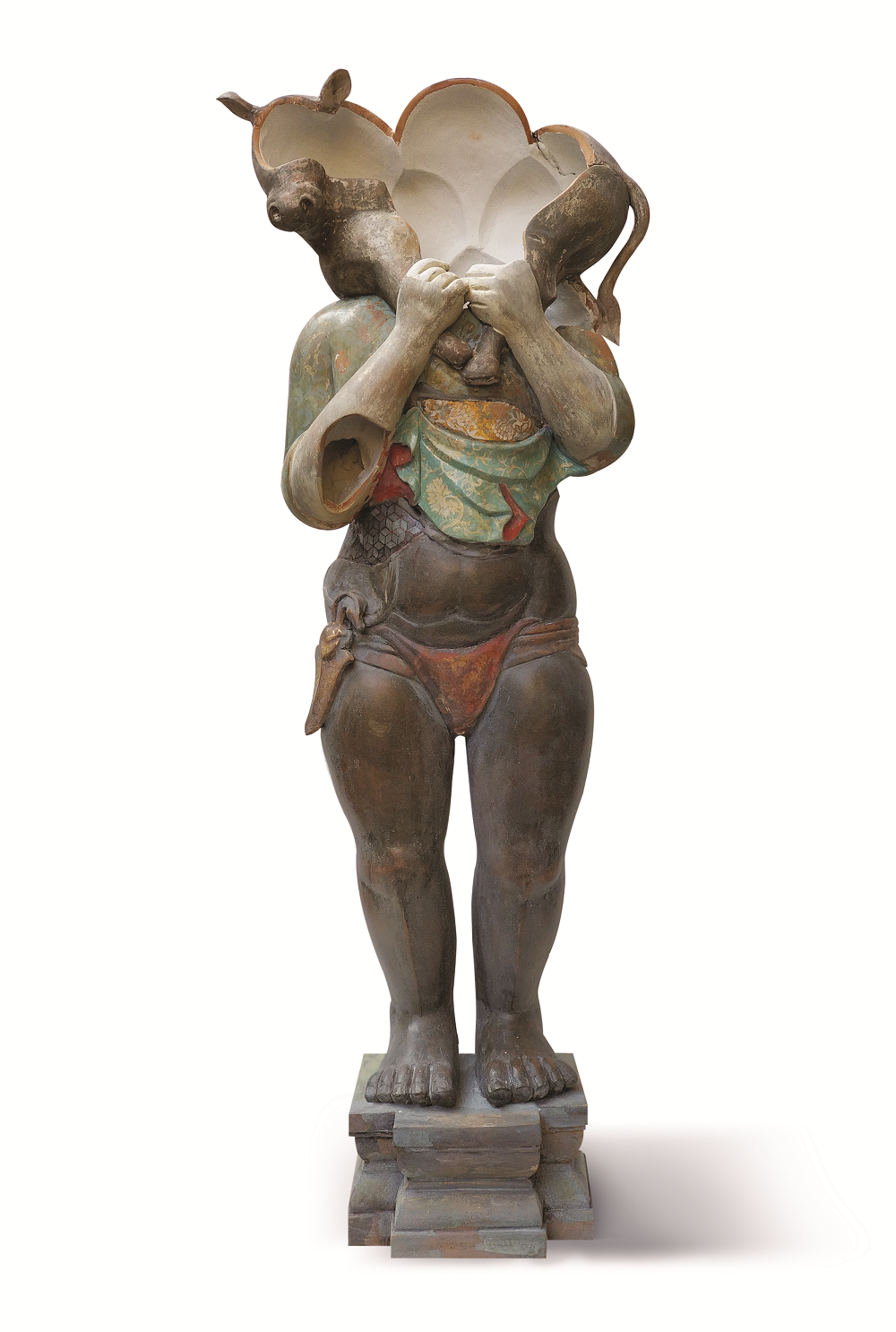 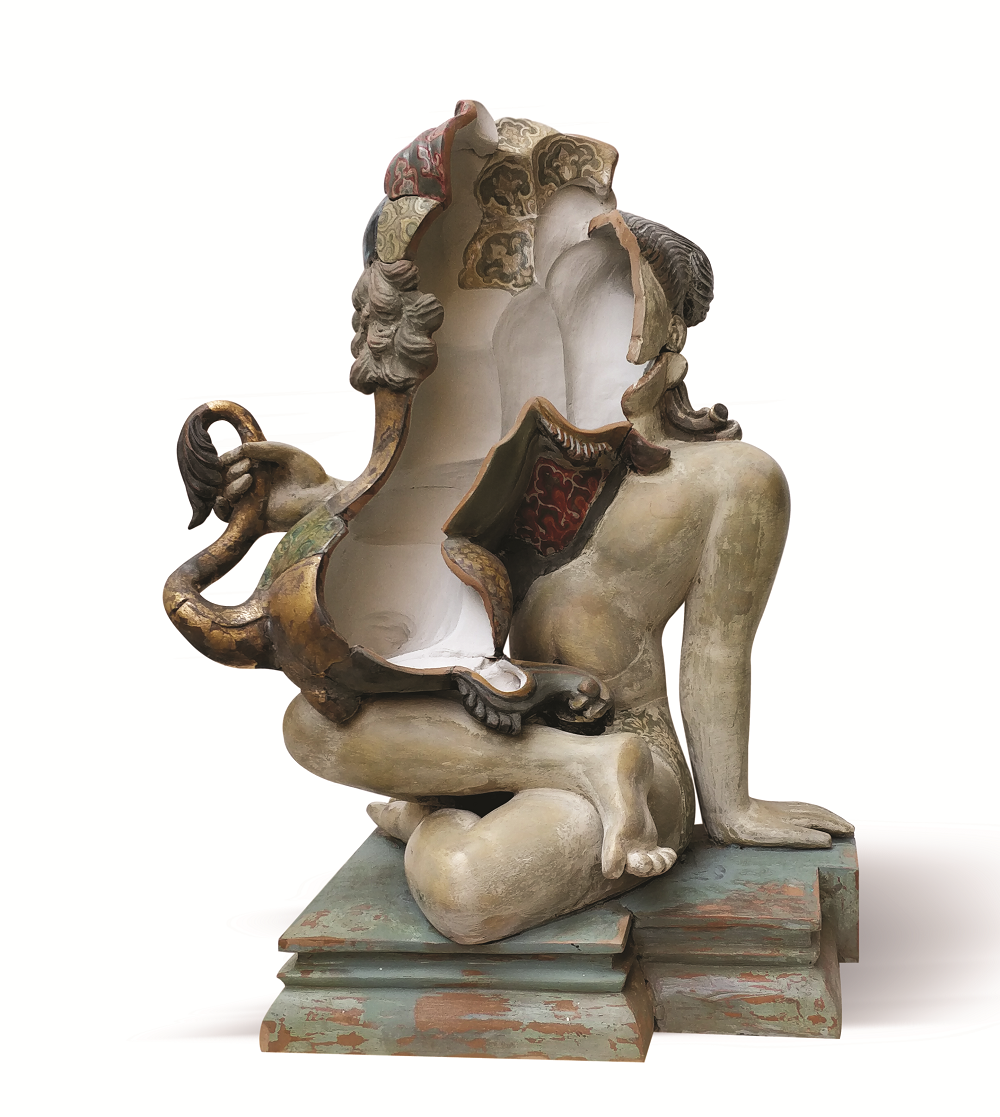 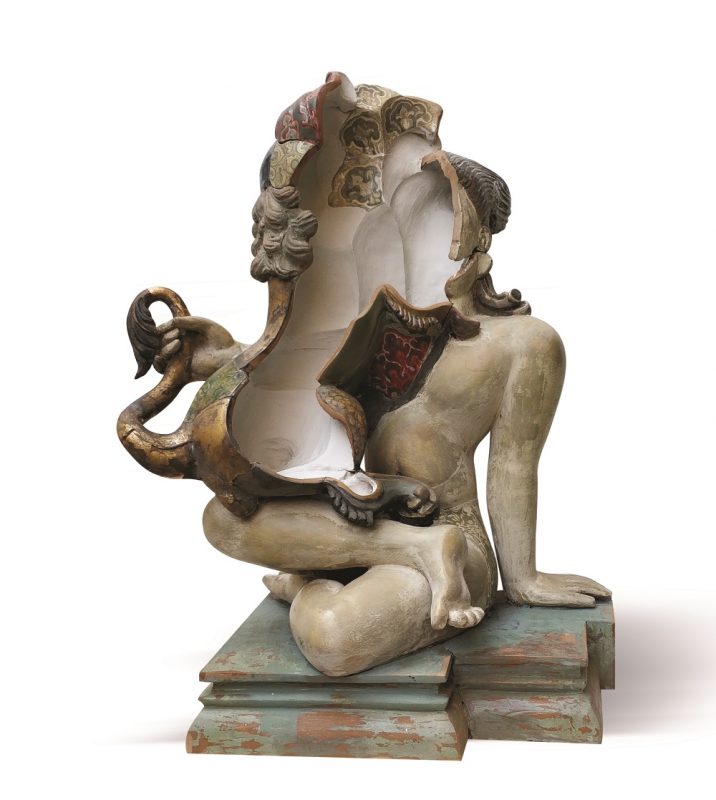 For his last show, he created the whole gallery as a museum and all the images looked like museum sculptures. Each work has 20-25 layers and Kamath tried to play with time by giving an illusion of different periods in the same series. “When you see a particular image, you cannot recognize whether it is Chola style or Pallava style, because it is an amalgamation. I deliberately did this because I wanted to confuse the audience and prompt them to think for themselves. Also, when looking at historical works, for example in Ajanta and Ellora, we often overlook that nature has also added layers to it. Some parts are visible, some are not and it makes one curious what element was there and along with that, we create certain stories. With the missing part, history is written. In my works, I always feel that history is fiction because each person writing it has different references and interpretations. As an artist, I am not going to simply believe by reading. I have to search for my own truth.”

Like he does not stick to any particular medium, so is his preference of keeping on changing the size of his works. “I work turn by turn. In between every large work, I do small works. I call them thinking paintings.” Currently, Kamath says he is playing with different images and enjoying the whole process of history. “History itself is a medium,” he says.  When we refer to history, Kamath says, there is a strong sense of cults and religions, and it is always changing. He has tried to depict this idea through a recent work called Ego Icon that features a bull and a tiger. “They have different references from China, India, Greece and so make for a kind of a puzzle for the reader. There is a constant fight of winning and failing. For example, there are references to gold being sold at the roadside of the great Vijaynagara kingdom and if you see it today, Hampi, it is in ruins. So it is a constant circle. I want people to experience that nothing is permanent. My work should not remain at the surface level. I want viewers to constantly engage with it and become a part of my work.”

Kamath’s art practice involves religiously going to the studio in the morning and studying the myriad images that he keeps collecting for reference. If he is to continue working on unfinished work, he keeps looking at it as if it were for the first time, and begins working only when the painting ‘starts talking to him.’ “I always avoid working on muscle memory,” he says. As parting advice to emerging artists, Kamath presses on conviction and gut feeling: “A lot of youngsters are very bold when they are in art college but after coming out, they get confused and get all kinds of notions of how they should work. I understand sales are important. But, don’t listen to anyone. Rather, listen to everyone but listen to your inner voice first. No medium is good or bad. If you are convinced about a medium, work hard with it and your hard work will show.”