In his centenary year, we continue to celebrate the vast legacy of SH Raza

The expansive legacy of Sayed Haider Raza or SH Raza cannot be confined to a single form. And yet, the ‘bindu’ (circle or dot) that he focused on and painted so lovingly for a major phase of his artistic career is an excellent symbol for his oeuvre — it is both a basic foundation and starting point of inspiration for generations, as also vastly interpretable and diverse.

One of the anecdotes Raza attributes to the origin of his embracing of the ‘Bindu’ was that his elementary school teacher, on finding him lacking adequate concentration, drew a dot on the blackboard and asked him to concentrate on it. Seeing as how the form is a metaphor for the point of all creation, Raza soon created a new point of creation for himself from the same motif.

A circle may have no start and end, but the earthly journey of SH Raza ended on July 23, 2016, exactly half a decade ago from today.

The same journey began on February 22, 1922, at Kakkaiya (Mandla district) in the Central Provinces of British India, which is present-day Madhya Pradesh. He was born to Sayed Mohammed Razi, the Deputy Forest Ranger of the district and Tahira Begum. Here, he is said to have experienced a fairyland of colours under the radiant sun of daytime, and the dense, isolated, almost hallucinatory nights in the forest. It is believed that these natural influences contributed to his avant-garde style, combining Fauvist colours, Cubist forms and/or Expressionist brushwork) with Indian subject matter. He experimented with a number of Modernist styles, but it’s probably his works in Abstract Expressionism and, later, Geometric Abstraction, for which he is widely celebrated.

“My work is my own inner experience and involvement with the mysteries of nature and form which is expressed in colour, line, space and light,” Raza is known to have said.

It is no wonder then that Raza took to drawing at the early age of 12 — after a stint at the Nagpur School of Art, he went to the prestigious Sir JJ School of Art, Mumbai. In his academic years, Raza’s peers were rather prolific as well, including the likes of Francis Newton Souza, Krishnaji Howlaji Ara and Maqbool Fida Husain, alongside whom he founded the Progressive Artists’ Group (PAG) in Mumbai in 1947, the same year that India gained independence, to straddle the divide between Indian art and European trends.

In 1950, he moved to France to study at the École nationale supérieure des Beaux-Arts (ENSB-A), Paris on a Government of France scholarship. Soon, he was awarded the Prix de la critique in Paris in 1956, becoming the first non-French artist to receive the honour.

Raza went on to live in Paris for the next 60 years, using it as a base from which to take painting trips across France (Brittany and Provence were favourite destinations).

During this stint, he also met his future partner, the French artist Janine Mongillat, while studying at art school. Raza and Mongillat got married in 1959.

Meanwhile, Raza gained widespread recognition in Europe and India as well. His work evolved from painting expressionistic landscapes to abstract ones. From his fluent water colours of landscapes and townscapes executed in the early 1940s, he moved toward a more expressive language, painting landscapes of the mind. Once in France, he continued to experiment with currents of Western Modernism, moving from Expressionist modes towards greater abstraction and eventually incorporating elements of Tantrism from Indian scriptures. 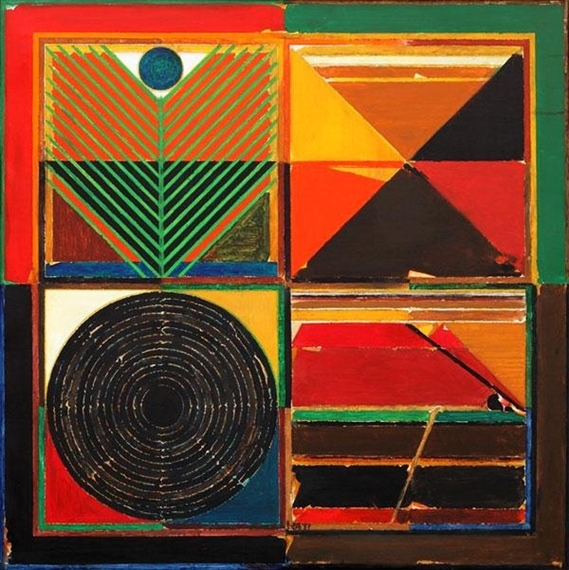 Initially, French landscape scenes dominated his work, characterised by gestural brushstrokes and an impasto application of paint. He saw the paintings of Post-Impressionists like Cézanne, Gauguin and Van Gogh, and “began to use colour as a tool of construction, switching from gouache and watercolour to more tactile oil-based pigments”, reads a profile of the artist on Christie’s online, adding that over time, his landscapes would become increasingly abstract. They were “rooted in Raza’s childhood memories of life growing up in small and densely forested villages, Tapovan — meaning forest of meditation — fusing abstract, symbolic forms into a powerful expression of the mood and atmosphere of the Indian nightscape. Painted in 1972, Tapovan is a seminal work that belongs to a key period in Raza’s career, when his artistic path brought him full circle and he began to integrate vital elements of his Indian childhood and cultural heritage into his paintings.”

Raza gradually abandoned all figurative and representational forms and the carefully constructed compositions of the 1950s, and began making gestural strokes on canvas, where the figure and ground were no longer separated, but blended in a composite whole. In his medium too, he switched from oil to acrylic.

Although the vibrancy of his paintings had become subtle later on in his career, the dynamism remained as alive as ever.

Unfortunately, Mongillat lost her battle to cancer in the year 2002, which impacted his personal life to a great extent. Not able to bear her loss, he decided to return to India in the year 2010 and made New Delhi his home.

By the end of his life he had received many awards, including the Padma Shri, Padma Bhushan and Padma Vibhushan (three of the four highest civilian honours from the Indian state). He had also been awarded the French Legion of Honour.

In order to promote art among young Indians,. Raza had founded Raza Foundation here in India. The foundation continues to work on his mission and gives away an award annually in his name to encourage budding Indian artists. To save, promote and protect his works, a committee under his name was started in Pais after he passed away.

Read our editor’s column celebrating here the centenary year of the legendary artist.

Abir Pothi also has exclusive access to fascinating excerpts from the book Raza: Jaisa Maine Dekha by noted artist Akhilesh, which have been translated and shared with our readers in a series of pieces titled Raza@100.

Lesser known works of Kahlo and Hokusai explored; and a very cute pupper paints a flower!Sudhir Patwardhan, Gieve Patel, Sunil Gupta and others explore human relationships in a group show