Jahar Dasgupta, a significant contributor of the modernist art movement in Bengal

One among seven founders of one of the oldest artist groups in India, Painters Orchestra, Jahar Dasgupta was born on May 31, 1942. He’s a contemporary painter from Jamshedpur, Jharkhand.

His inclination toward paintings was vivid from his drawings of elephants, dogs, and trees on the floor during his childhood days. At the age of 9, his drawings of Stalin’s face and Maa Sarada Devi on the walls drew his parent’s attention and he was enrolled in Visva Bharati University at Santiniketan in 1960. Learnt his lessons under mentors like Nandlal Bose, Ramkinker Baij and Benode Behari Mukherjee.

In his early days he used to paint in oil medium and gradually shifted to work in ink, pastel and acrylic colour thereby developing his individual style in paintings and drawings. He was an art teacher in a non Bengali school in North Calcutta in the beginning of his career. 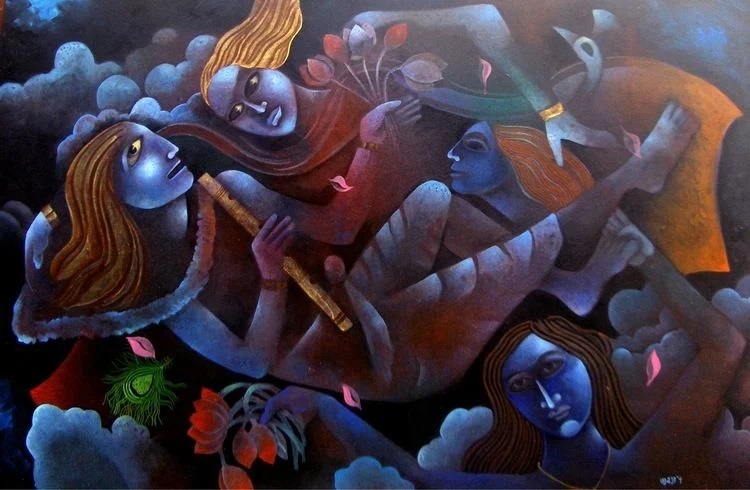 His early paintings in 1970s revealed reality in its crudest form. The Bangladesh liberation war of 1971 was the source of inspiration for his paintings. An acrylic canvas titled “Scrap” by Dasgupta shows clusters of dilapidated human bodies tied together are being pulled up from a crate by a crane.

The subject of his paintings ranges from reality of life to nature, animal and woman in dry pastel both in monochrome of black and white. He explored various subjects in different style. ‘End of an Era’, ‘Genocide’, ‘Waiting for Godo’ are the reflection of anger and crude rebellion, whereas ‘Mermaid’ series, ‘Fall of Radhika’ series touch the chord of beauty ingained in life.

Dasgupta is the recipient of the Paricharan Sarkar Memorial Award and was also awarded with the Lifetime Achievement Award in Fine Arts in 2000 by Rotary club of Madhyamgram.

Disguised as old lady, man throws dessert on the Mona Lisa in LouvreYears after planning, Human ant hill is finally opened to the public