Neelmani Devi is the potter woman from Manipur who reinvented legend

Informed by centuries-old community tradition, she had the will to carry forward her art with personal discernment and strong-willed flair

A series on art talent from the heart of India, which has created new languages — the last mile artists who reinvented tradition. This is the fourth part of her series. Read the first three here, here and here.

In Manipuri language, the word for clay is ‘Leipak’, and the same word is used for people, too. One often hears a person telling another: “Leipak has considerably deteriorated, there are a lot of pebbles and dirt in it.” It is a common expression, says Neelmani Devi, implying that whether it is making of a nation or a pot, Leipak free from impurities is a precondition for the well-being of both.
In India, traditionally, it is a taboo for women to sit on a potter’s wheel. Except for one or two instances elsewhere, Manipur is probably the only state in India where the potter’s craft is practiced by women — and without using the wheel. However, it may be noted here that those traits of Manipur pottery have their counterparts in Burma and Thailand. Characteristically, therefore, the Manipur myth relating to the origin of pottery differs from the similar myths found in other parts of India.
It is interesting that in the creation myth of the Meitei people of Manipur, the earthen pot becomes the metaphor for the womb. As per the myth narrated by Neelmani Devi, Guru Sannamahi — the lord who created life on this earth — was born from a pot made by Ima Leimren Shidabi.

Neelmani Devi’s pots, though meant for containing such mundane things as water, dried fish or grains, seem to be created as if they are developed ‘muscle by muscle’, by burnishing from inside as well as outside, and have the quality of living flesh, heaving and breathing. A cluster of these timeless pots as they receive the first rays of the rising sun conjures up the image of the womb mentioned in the Meitei myth of creation.
As one watches Neelmani Devi engrossed in shaping her pots or carefully burnishing them, again the myth comes back to one’s mind, flashing the image of Goddess Panthoibi, who was taught the art of pottery by Ima Leimren Shidabi before disappearing forever from this earth.
Neelmani Devi emerges as an artist of great individuality from the inherited collective tradition of pottery-making in Manipur. Her fine understanding of the conventional techniques of her craft gave her the legitimate freedom to manoeuvre this knowledge to attain creative deviations.
Before I discuss Neelmani’s personal achievements, it may not be out of place to briefly describe the traditional techniques practiced by the women potters of Manipur. Manipuri women follow a unique method of making pottery without using the wheel. The potter takes a lump of clay and shapes it into a slab. She then holds the slab to form a cylinder known as the chapfu houba, to which a base is attached. At this stage, the potter places the cylinder on a stool or a log of wood to further develop it into a pot of a desired shape. For this, she takes a thick but soft wet cloth called a phunanphadi, wraps it around the open rim of the cylinder and grips it tight with her palms, fingers and thumbs of both hands, and rotates around as if she were the wheel herself. These rotations are made clockwise and then anticlockwise, alternately. At the end of this process known as mapan nanba, the collar of the pot gets ready. When the collar is sufficiently stiffened, she beats the pot with a wooden beater or a stone anvil, till it acquires the desired shape, size and thickness of the wall.

Neelmani Devi’s talent is nurtured by these centuries-old collective visions and perceptions of her community, enriched by myths and legends that inform much more than mundane factual data. She carries forward this art with her personal discernment, insight and sensibility, giving her tradition a new aspect of historic importance.
What gave Neelmani Devi’s pots their special sparkle and brilliance is the act of smoothening and burnishing, which she did with the help of ‘kang’ — a large tamarind-like seed. This act of burnishing is very time-consuming as well as laborious, and it doesn’t add anything to the utility of the pot. Hence, the reason Neelmani started doing it is purely aesthetic. If the clay pot is burnished for a long time, its surface gets a sheen that is not lost during the baking of the pot. After baking, these pots sparkle as if they have been glazed or coated with a layer of glass. When I once asked Neelmani Devi if she could recognise her pots from those made by other women potters of her area, she said, “Not just me, but anyone could recognise my pots from their shine; and as for myself, I can recognise my pots blindfolded, just by touching them from the inside, because no one else would bother to smoothen the pot from inside, the way I do.”
It is very heartening to know that in her village and also at the famous Khwairamband market in Imphal, Neelmani Devi’s burnished pots fetched triple the price of the regular pots, and she told me that she could never actually meet the demand for her pots in her own village.
Through the translucent skin of Neelmani’s pots, one sees the muscular structure and its internal weave of tissues carefully built by the movement of her fingers, guided by the warmth and sentiment she feels towards her creations.
Neelmani works completely within the norms of a tradition, and at the same time, departs from it in terms of personalised treatment of form and surface. In other words, she derives from the centre of the tradition, but chooses to walk on the periphery — the walk is difficult but unique.

Neelmani Devi was duly recognised for her contribution to the tradition; she was conferred with the National Award for best craftsperson, Tulsi Samman and Padma Shri in 2007. Today, all pottery from the state of Manipur has a reputation for special burnished pots, a technique mastered not so long back by the talented Neelmani Devi.
Neelmani Devi has in a real sense both preserved and re-invented tradition, and in the process, enriched it immensely. This cannot be expressed better then by a song sung by her to me: “The bird, though it returns to its own tree, does not recognise the branch it had perched upon earlier. Similarly, potsherds remain separate from the earth from which they originate, even when they return to it.” 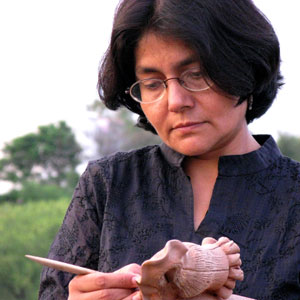 Shampa Shah established the Ceramic Section at Indira Gandhi National Museum of Man (IGRMS), writes about how tribal artists and artefact makers have reimagined and reinvented an entire tradition, and created a new world altogether. These last mile creative figureheads have helped keep India’s glorious history of art relevant in the contemporary world. This is the fourth part of her series. You can read the first here, second here and third here.

How Freud’s psychoanalysis impacted SurrealismLove in the time of pandemic: Let’s weather the storm together, let’s talk and realise the possibilities of being human