Our artists of the week celebrate the power and fragility of Mother Nature, dabble in the psychology of colour

Home / Artists of the Week / Our artists of the week celebrate the power and fragility of Mother Nature, dabble in the psychology of colour
September 29, 2021September 30, 2021

Shruti Chawan: An abstract and vivid tale of colour

A variety of forms and compositions find themselves in the works put forward by artist Shruti Chawan, who professes that an open imagination helps her render abstract versions of fantasies and emotions. Interestingly, she has worked on a series that showcases thoughts based on the psychology of colour expression. Another strong influence in both her printmaking and painting is inspiration drawn from mythology and traditional folk tales, bringing in motifs and styles that are a paean to custom. For an example of this, one could turn to the corex print titled Mantra. It is an unusual canvas, triangular and symmetrical. This particular geometrical shape has deep and abiding ancient connections with many forms of spirituality and the Shruti further peppers it with more symbology within the structure, leaving the viewer to draw their own conclusions as to its meaning or provenance. The soothing shades of blue that alternate within the shape are both calming and attractive simultaneously. Another interesting piece is an aquatint on zinc plate artwork that is Untitled. It harnesses the symbol of fish, dividing it up into a frame full of greys and blacks, as also once more geometrically fulfilling. The symbolism seems to point to a story of greed over resources, although it is abstract enough for the viewer to draw their own meaning. In an entirely different series of abstracts made using acrylic on box boards — which also amply demonstrates her range — an interesting frame is Mind (Thoughts And Emotions). Here, dull, earthy brown-green shades unevenly cover the canvas, fading into ghostly white occasionally. And yet, this facade is scratched away in several spots to reveal a shining gold-yellow and blue that seems to be unveiling a portrait trapped behind all the grime. 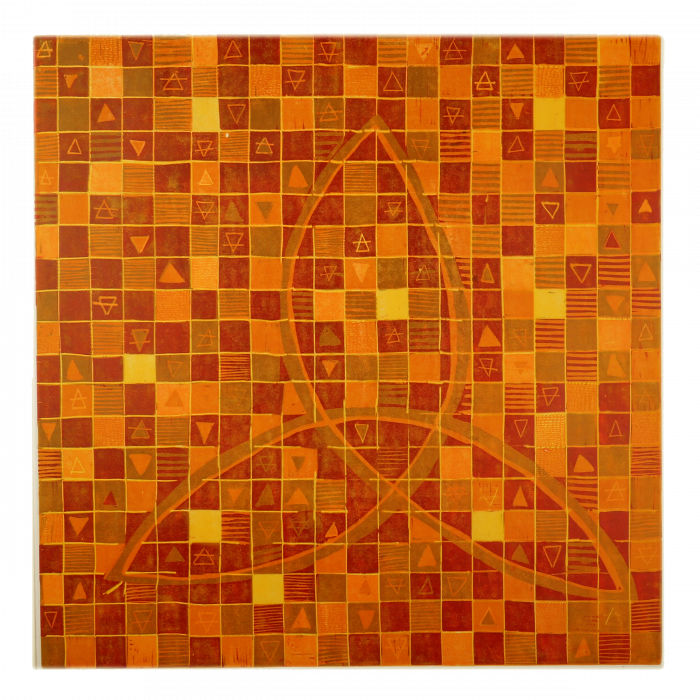 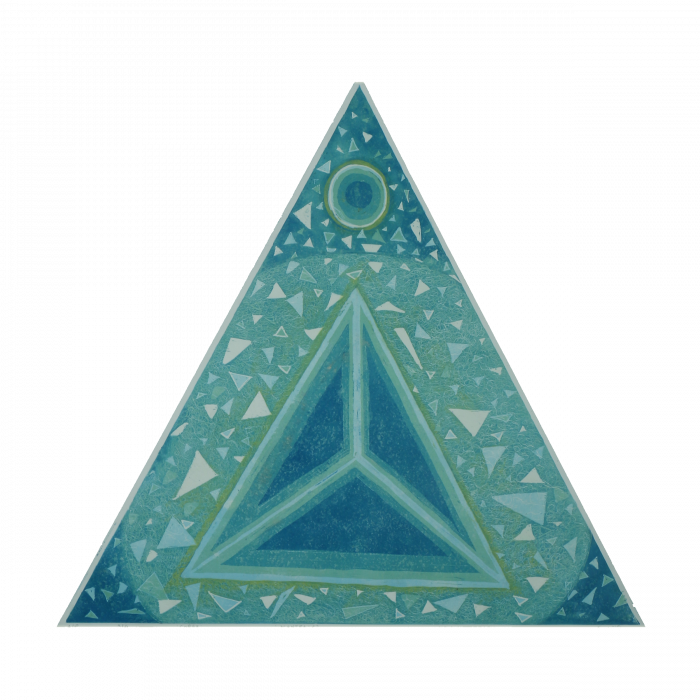 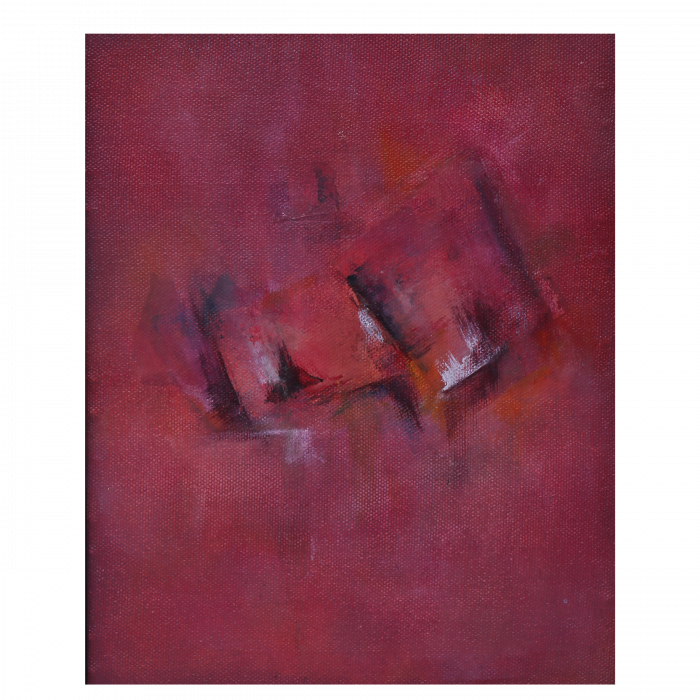 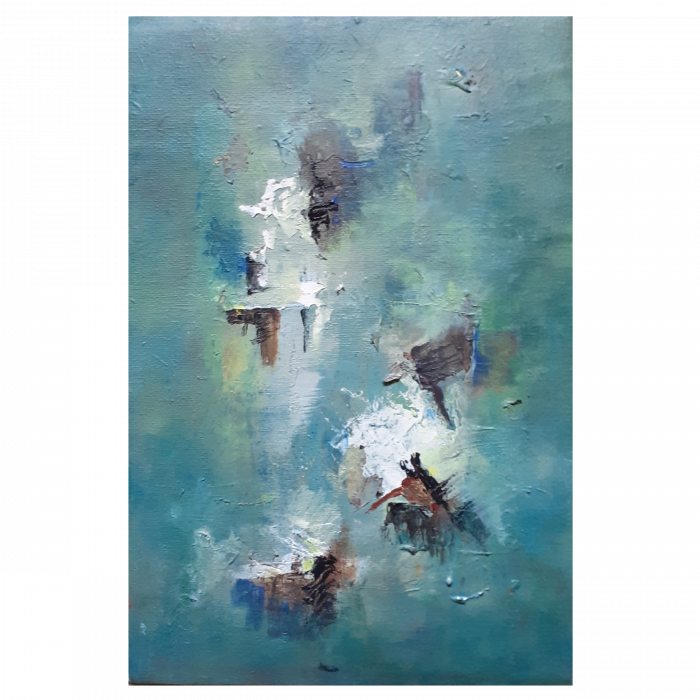 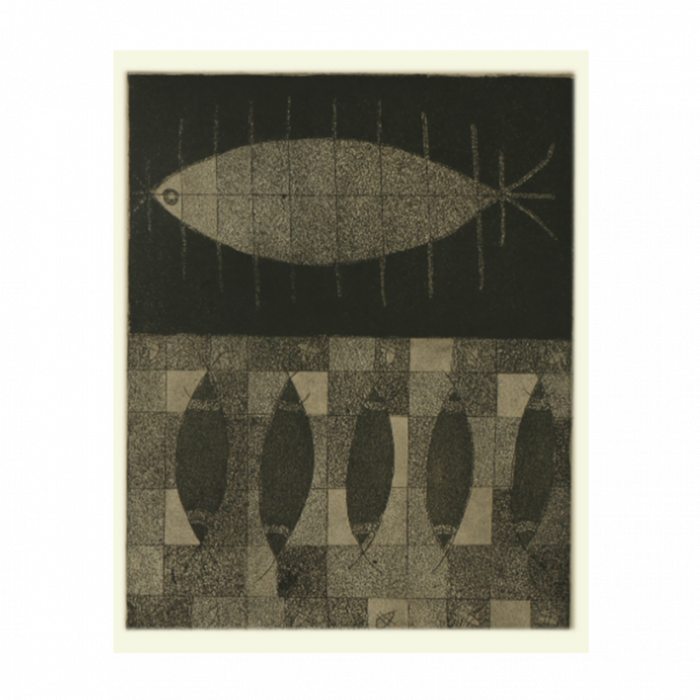 Uday Goswami: A sensual and vivid ode to Mother Nature

There is an unabashedly enthusiastic and vibrant worship of Mother Nature in the works of artist Uday Goswami, who uses acrylic on canvas to create simple compositions that come alive via extremely enhanced color and contrast. This in turn, he feels, bring about a palpable sense of life to the art, which is a tribute to the life-giving force that surrounds us. The ode to nature also comes about in a running set of motifs in his Ankuran Series — fruits and seeds and flora of all varieties from a veritable Garden of Eden, to depict sensuality, fertility and self-sufficiency. These fruit are ripe, seductive, bursting with power and potential, and often stand as a symbol of life, eternal energy and renewal. In Ankuran Series 5, this is amplified beautifully with the depiction of a vivid blue, anemone-like floral form, indeterminate in its origin being marine or terrestrial, standing out against a paler lilac background, its tentacles swaying in 2 separate renditions of a diptych. There is a young bosom-like innocence and voluptuousness both together to the fruit. In Ankuran Series 2, this takes a different avatar. Here, a dull brown-black hirsute seed appears to have cracked open against an achingly scarlet background, bursting with pollen and full of the potential of new life, poised on the very edge of fulfilling its purpose and perhaps being left as a dried out husk thereafter — or perhaps tapping its infinite potential withing and regenerating once again, full of promise. 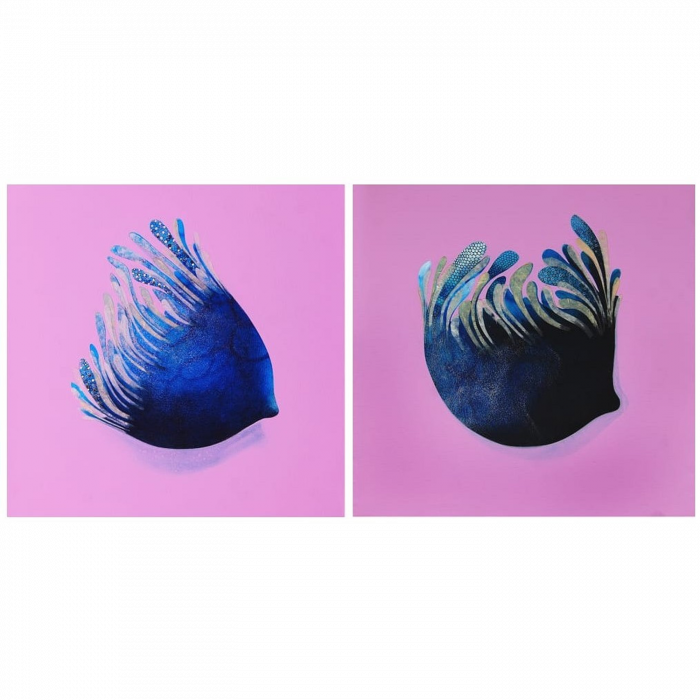 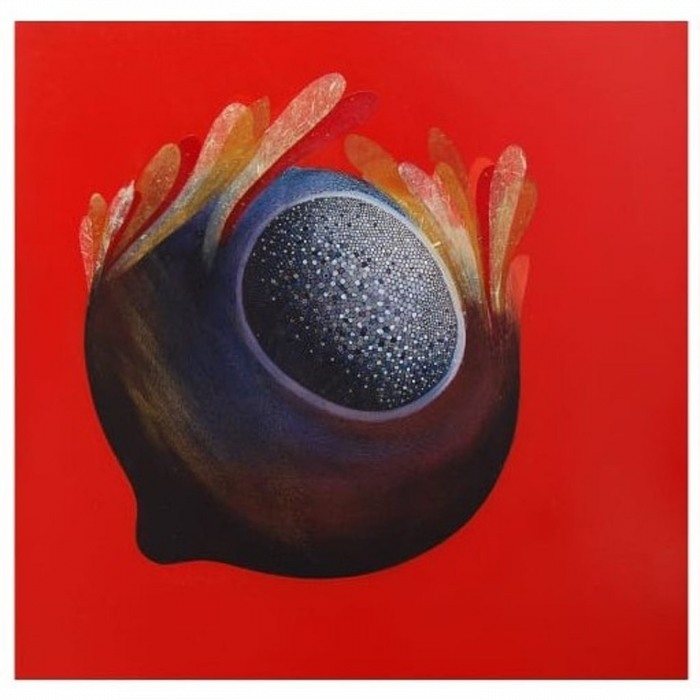 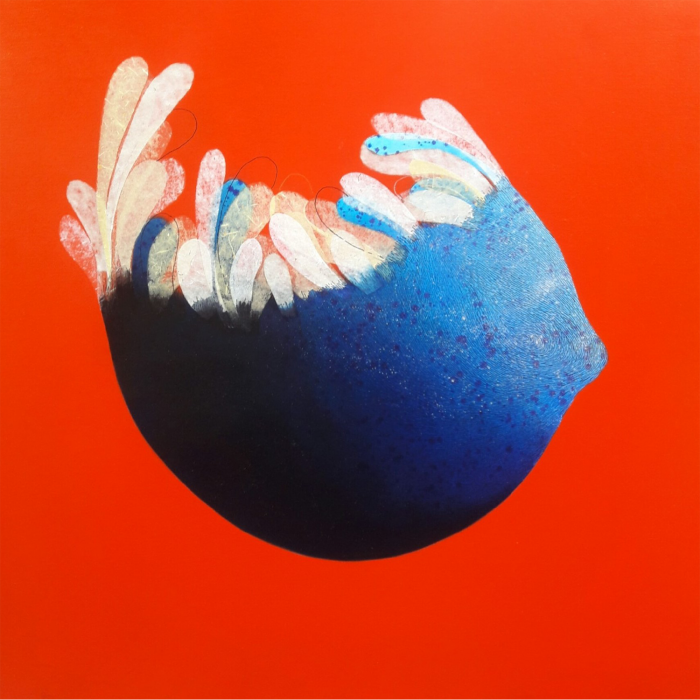 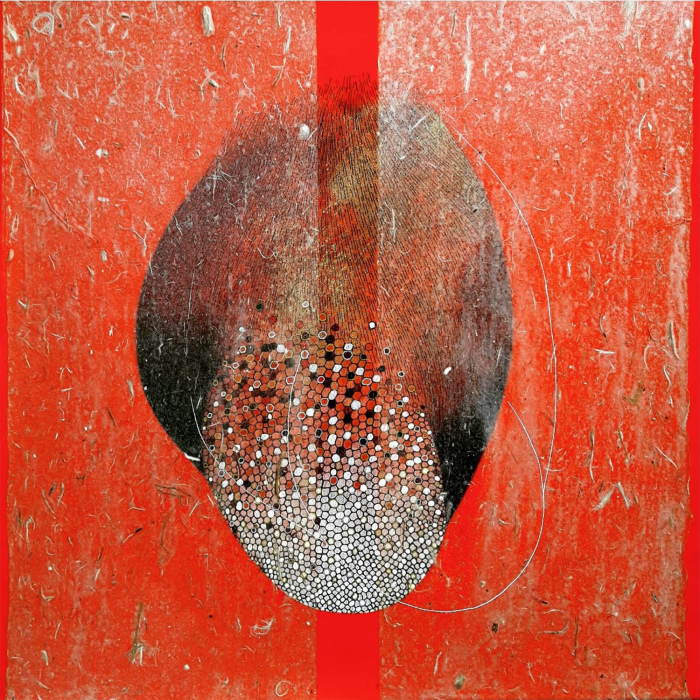 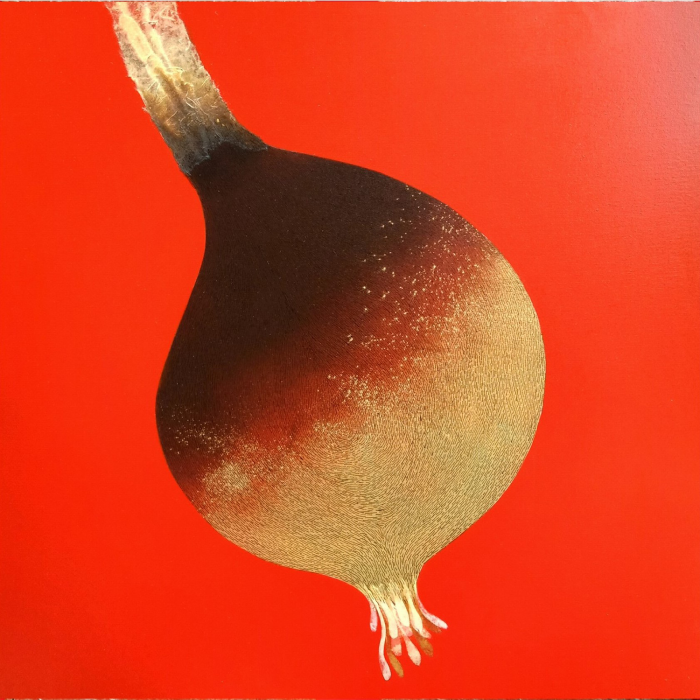 Vanchha Dixit: Earthiness and rejuvenation in a colour palette

Often made in panels, or uniquely incorporating pages of books, many of the works made by artist Vanchha Dixit come across as both challenging and creative. She calls her inspirations ‘a constellation’ of influences that come from nature and experiences — they take on a fantasy hue, employing a use of colours that is both delicate and sure-of-hand, both at the same time. She also professes that she tends to opt not for pastels but more earthy colours, although there is a boundless lightness and sense of rejuvenation in several of the palettes that she chooses to employ. For instance, in Lockdown 3, a series of panels comes together to depict an abstract experience of the artist during the Covid-19 pandemic. The most prominent shade used is a vivid hue of blue, which finds itself wrought across several patterns in successive panels. It dances with an earthier shade of orange-rust interspersed, as well as a clever use of white to lend a glow and lightness to the composition. Most of the patterns seem floral and/or inspired from nature — perhaps an observation of passing time as we remained bound by the uncertainty of the crisis around us. Kora Kagaj V is yet another interesting composition. Here, we find the use of old, fragile, crumbling pages of text, removed from books, forming a part of the canvas, which in itself is half burnt away to indicate the dilapidated nature of the centre piece. Splotches of colour and wild bold acrylic patterns dominate the forefront, and make for an apt contrast that is almost reminiscent of nostalgic artwork made in more innocent days. 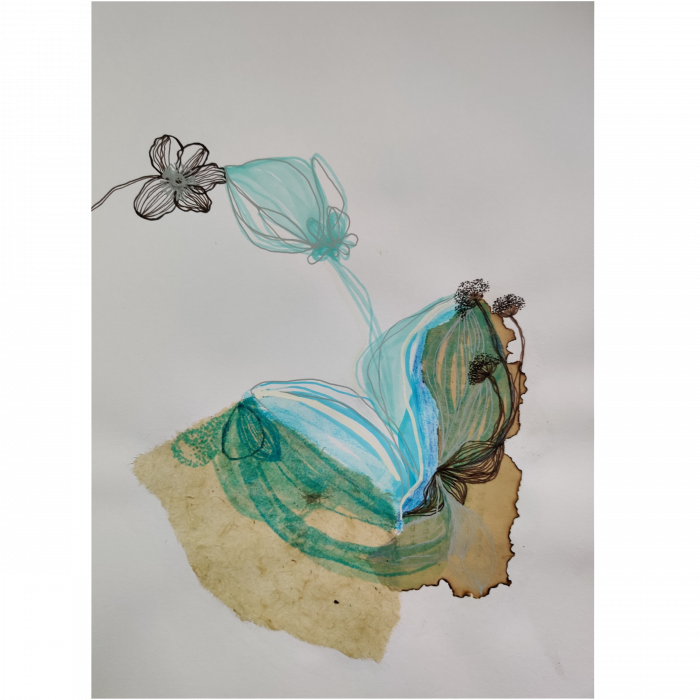 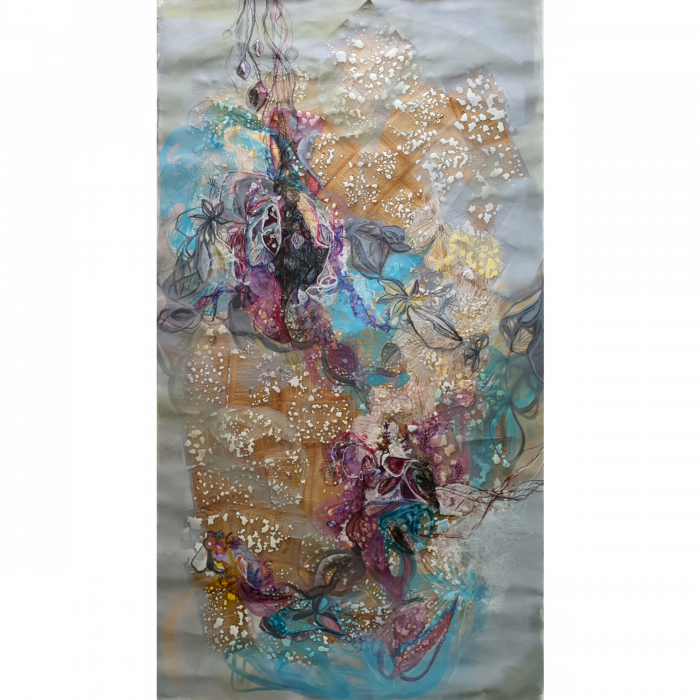 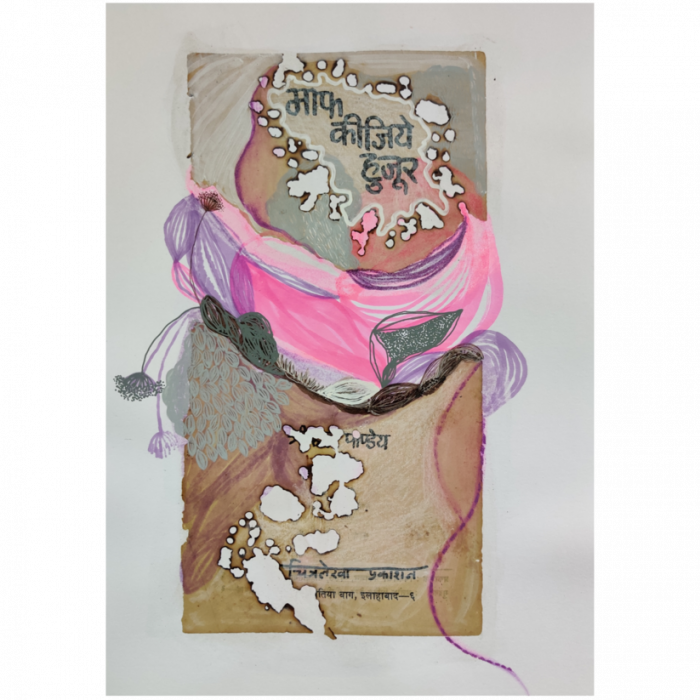 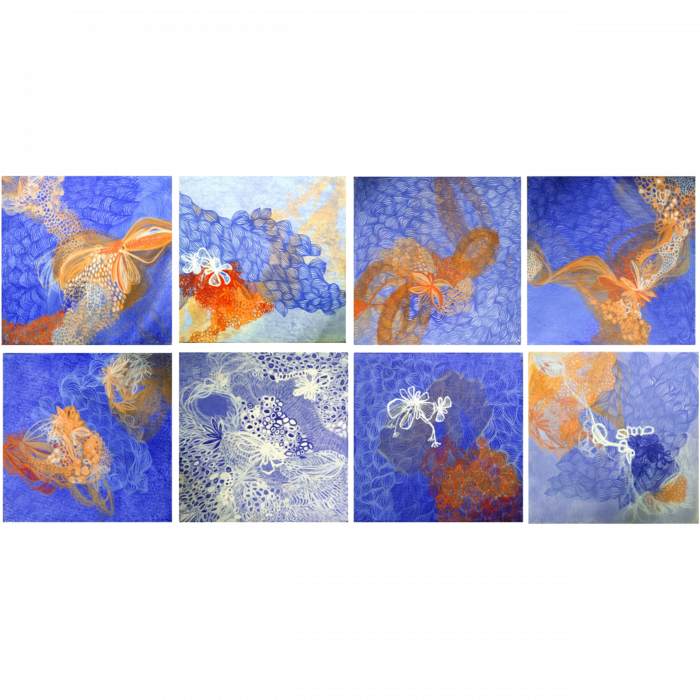 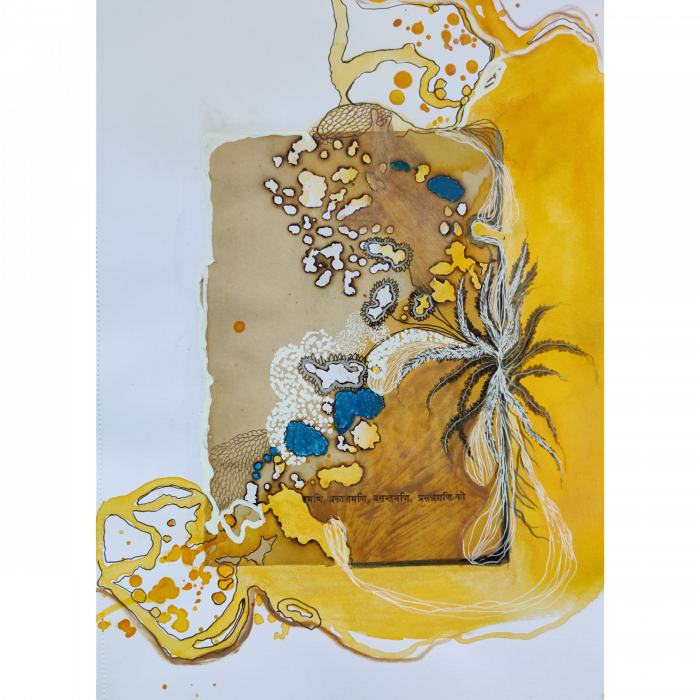 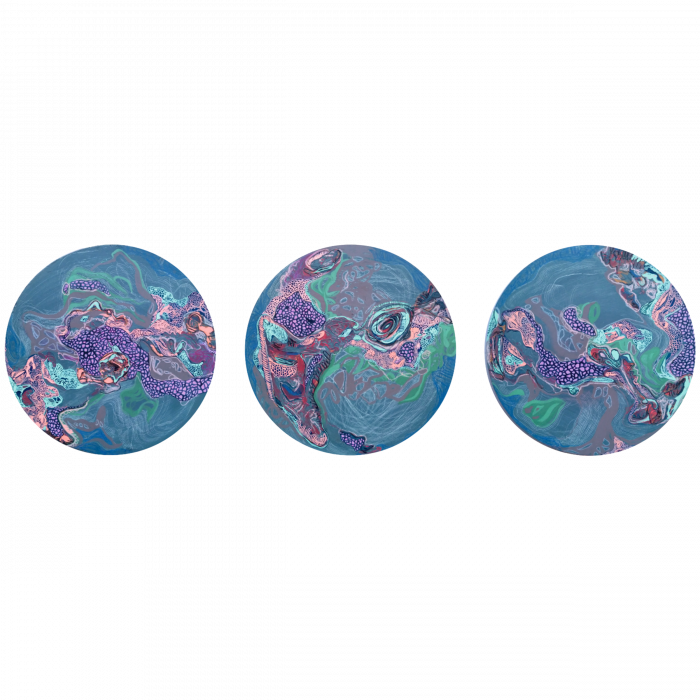