Prakrut — An exhibition of young contemporary tribal artists of India

An artwork from the exhibition, by Balu Jivya Mhase from Maharashtra

‘Prakrut’ is an upcoming contemporary Indian tribal art exhibition on display at the Triveni Kala Sangam, curated by the renowned artist-curator Akhilesh. The show’s preview takes place on July 1, 2022, and it shall be open for public view from 2nd July to 10th July. It features two recent works each by twenty artists belonging to different tribes, mostly from the central, southern and north-eastern regions of India. Some artists on display are Punyo Chobin, Sreejith K.R, Nandita Rabha and Santosh Maravi. Prakrut is supported by the Raza Foundation and Akar Prakar. 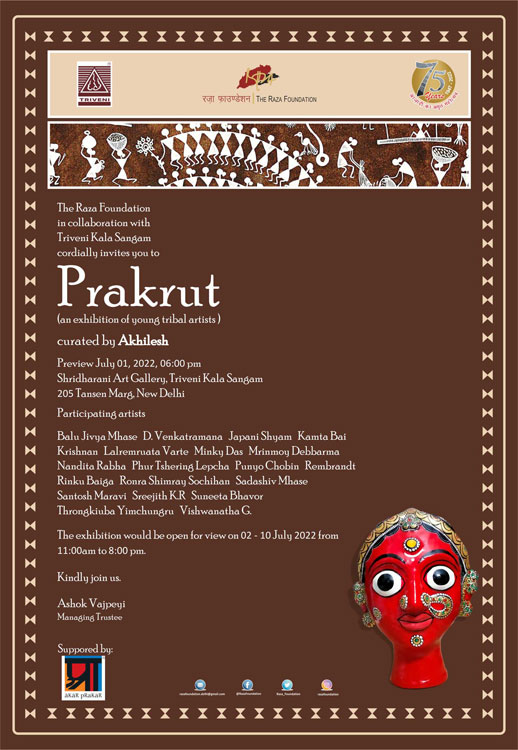 Akhilesh asserts that these artists should not be merely dismissed as illustrators operating under tribal norms, but need to be seen as individuals creating their pieces with subjective involvement. He says that while a master contemporary artist like Anish Kapoor is given credit for the work conceptualized by him but executed by studio assistants, the tribal artist paints alone as per the license and liberty given to him by the entire tribe on their behalf. He argues that since in both cases the art piece is carried out at the helm of an individual, a tribal artwork created in our times should also be viewed as a contemporary artwork.

As a curator, by granting the reputation of “contemporary art” to tribal artworks, Akhilesh is furthering the important project started by the artist and art catalyst late Jagdish Swaminathan, who was instrumental in showcasing tribal artists in Bharat Bhavan — Bhopal’s premiere contemporary art museum founded by Swaminathan and commissioned by the government of Madhya Pradesh in 1982.

According to Akhilesh, the works of these tribal “contemporary” artists display an immediacy of expression as well as the identification of the artist with their subject, unlike many urban artists who keep themselves at an objective distance from their subject matter. He states that while the urban counterpart becomes an artist, the tribal artist already starts out as one. This dichotomy is intriguing, and could open up new avenues as well as throw up doubts in the discourse of contemporary art. If, according to the show’s curator, such tribal art is the “prakrut” (organically, spontaneously created) face of contemporary art, then is the white cube practice its “sanskrut” (culturally, classically created) side?