Raza@100: Noted painter Akhilesh talks about how the master artist helped him understand the language of colours.

(Editor’s note: Abir Pothi is excited to bring you book excerpts from Raza: Jaisa Maine Dekha by noted artist Akhilesh, where he has sketched through words about his long association with Syed Haidar Raza from author’s early days to Raza’s last. We thank Akhilesh to allow translating and using excerpts for Abir readers. This is special because Raza would have entered into his 100th year. It is a very useful book for art lovers and specially young artists to look at journeys of two artists crossing, connecting and sometimes entwining their paths and destinations. We are bringing it in five parts. This is the second of five part series.)

On our way back from Bhopal to Indore, I kept wondering about how Raza begins to work on his painting. Mostly with black colour. During the journey Haren and Qadir began to see Raza’s works through my way of seeing. His colours kept chasing me even after reaching Indore. Around that time, in our college (Chandresh) Saxena sir told us Raza is coming and an exhibition will be organised in his honour. Works of local artists and pass-outs from the college will be included in this show. We students were excited and took it upon ourselves to organise it and within two days, collected all the works. A grand exhibition was installed under the direction of Saxena sir. Soon one day we saw Raza climbing the stairs of our college. 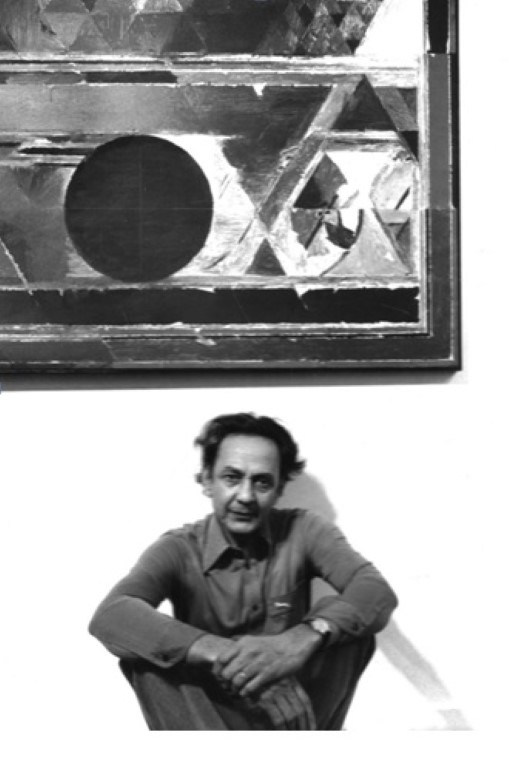 I had no idea about the surprises waiting for us. One was that Saxena sir and Raza saheb had studied together. We students were standing outside the college hall. Raza and Saxena sir climbed the stairs and we all folded hands before him. Nodding to us, he asked Saxena sir, where is the exhibition, ‘ I would like to first see it and alone.’  Saxena sir opened the door and ushered him in. We remained standing outside and kept watching Raza entering the hall. Saxena sir went to his room, where other artists of the city were present. My father (Ramji Varma) was amongst them.

After a while Raza walked out of the exhibition hall and went to Saxena sir’s office and returned with all artists and entered the hall again. We students were still waiting outside for the formal opening and address by Raza. After some time again the door opened and Saxena sir came outside. He looked at me and asked me come inside. I opened the door and got inside and saw Raza standing before my work and on seeing me coming in, said it loudly, ‘This is the only painting in the room!’

I felt sudden pang of awkward embarrassment. That Raza singled out my work for praise, while the hall was full of works from respected and senior artists were also there, who all have been source of inspiration for me. I walked towards him with bowed head. Raza said that sentence again and then my father said, he is my son. Raza looked at him and said this time looking at me, ‘I liked your work.’ I kept listening with my bowed head and was waiting for this to get over. Raza again said something in praise. I mumbled about this work is based on a shlok (couplet) of the poet Kalidas from his work Ritu Samhara. He describes various seasons in this anthology. In his chapter of Grishma Ritu (summers), Kalidas describes a young women wanting to rest in the heat of the day, and in the process she is unaware of how dishevelled her clothes have become.

Raza liked my description and started looking at the work again. While he was seeing the work, I said Namaskar to him and walked out of the hall. After that the event began. As he sat on podium Saxena sir in his welcome address said he and Raza sahab were together in art school and my father was one year senior to them. They used to go to Mumbai for yearly exams from Madhya Pradesh. These exams went on for three months and they had to rent a room and lived together. Saxena sir was from Ujjain. Raza came from Nagpur and my father from Indore. They became thick friends during those four-five years. During holidays in between exams they would go to various locations in and around Mumbai to do landscapes.

Raza became sentimental while speaking. He said this is the day of Ram and Bharat milaap. This was also coincidental that Raza returned to his birthplace state of Madhya Pradesh after 14 years. Saxena sir kept these 14 years in centre of his address. My father also addressed the gathering remembering his association with Raza. He remembered how Raza advised a student to use deep yellow colour in place of blue skies in a painting. And that student got better marks after making this small change.

Not just for me, but that day was full of learning for all students. Raza spent good time seeing the paintings and spoke to the ones, whose works he liked. The time for students, who were thoroughly enjoying meeting and talking to him, had to end. In between he told me, he would want to see more of my works and if he would get an opportunity he would definitely see them. I told my father that Raza saheb wants to see more of my paintings, so he should invite him home. He told me, you invite him, but he must be busy, he is a state guest. Raza was state guest and had a 10 member security detail from state police. Just when he was about to leave, I invited him. He stopped and took out his diary and started looking at it. His second day was completely full with appointments. He said, ‘I am busy from seven in the morning.’ I said, ‘can I come to get you at six? Our house is just two minutes away from where you are staying.’ Raza was staying at Residency Kothi at Indore, and our house was indeed two minutes away. Raza kept thinking and took out his pen. He asked, “What is your name?’ And wrote in his diary – “Akhilesh morning 6 o’clock.”

I was euphoric by this development and had no clue of more surprises which awaited me. We were all enamoured by Raza’s gracious and dignified presence, and his style of speaking, besides showing attention to finer details of all works and talking about it. We kept talking about him after he had left and kept trying to look at paintings from his view point. Raza had created in all of us a new way of thinking.

You can read the first part here.

Copyrights: Akhilesh. Translated from the Hindi by Nidheesh Tyagi.

Myriad urban tales, some natural inspirationArchitecture that is art