Jacek Malczewski, a Polish Symbolist painter, was born on this day, 15 July, 1854. He is considered to be one of the most revered painters of Poland and had strong associations with the patriotic Young Poland movement following a century of Partitions of Poland. Regarded as the father of Polish Symbolism, his creative output combined the predominant style of his times with historical motifs of Polish martyrdom, the romantic ideals of independence, Christian and Greek mythology, folk tales, as well as his love of the natural world.

Malczewski moved to Kraków at 17, and began his artistic education in 1872 under several great masters, one after the other. He also enrolled in an art school and spent a year studying in Paris. He was greatly influenced by Jan Matejko’s style as well as that of the earlier Polish Romantic painter Artur Grottger. Many extensive travels around the world informed his art practice. Over three decades, between 1885 and 1916, Jacek regularly made trips to Paris, Munich, Vienna, Italy, Greece, and Turkey. 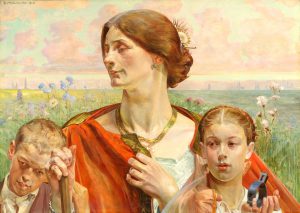 He also drew inspiration from a wide variety of sources often exotic or biblical, and translated them back into Polish folklore, tradition and motifs in his own paintings. His most famous canvases include ‘Vicious Circle’ (1895–97), ‘Melancholia’ (1890–1894), ‘Painter’s Muse’ (1897), ‘A vision’ (1912), among others. Many of his paintings prominently feature grandiose self-portraits that reveal his sense of humor and capacity to laugh at himself. 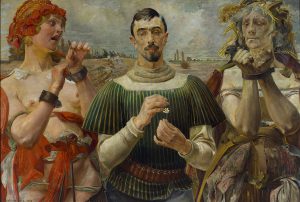 During the periods of 1897-1900 and 1912-1921, Malczewski served as professor of the Academy of Fine Arts in Kraków. He was elected Rector of the Academy in 1912. His art has been compared to many great contemporaries and his paintings won many awards at international exhibitions. Malczewski  died on 8 October 1929.

Amalgamation of art from diverse fields and in diverse mediums: Group exhibition at EspaceExhibition of six tapestries by Raphael; and two more art stories