Remembering Jane Frank, the American multidisciplinary artist, on her birthday

An artwork by Jane Frank

Jane Schenthal Frank, was an American multidisciplinary mixed media artist who enthralled the viewers with her spatial paintings and minimalist sculptures. She was also an illustrator and a textile artist and was born on this day, July 25, 1918. She studied with artists, Hans Hofmann and Norman Carlberg. An abstract expressionist who drew her inspirate from landscapes and nature, her later paintings referred more explicitly to aerial landscapes while her sculpture tended toward minimalism. Chronologically and stylistically, Jane Frank’s work straddles both the modern and the contemporary (even postmodern) periods.

Jane attended the progressive Park School and received her initial artistic training at the Maryland Institute College of Art, earning a diploma in 1935 in commercial art and fashion illustration. She then acquired further training in New York City at what is now the Parsons School of Design from which she graduated in 1939. In New York, she also studied at the New Theatre School. Her schooling complete, she began working in advertising design and acting in summer stock theatre. She began painting seriously in 1940. She reportedly began a study of the history of painting and “went through a progression of spatial conceptions” from cave painting through the Renaissance, then concentrating on Cézanne, Picasso, and De Kooning. 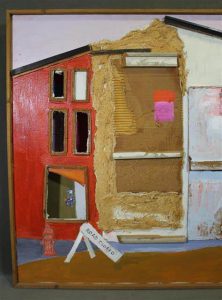 In the following decade, while raising a family and rapidly developing as a serious painter, the young mother also illustrated three children’s books. She suffered serious health setbacks in the coming years. A car accident in 1952 left her requiring multiple surgeries. The second was a possibly life-threatening illness that she got soon after her 1958 solo show at the Baltimore Museum of Art. Despite severe health issues, Jane held forth with determination and studied for a period in 1956 with the great abstract expressionist painter Hans Hofmann in Provincetown, Massachusetts. She soon had solo exhibitions at the Baltimore Museum of Art (1958), the Corcoran Gallery of Art (1962), the Bodley Gallery in New York (1963) and Goucher College (1963), among others. In 1962, she won a Rinehart Fellowship, enabling her to study with Norman Carlberg at the Rinehart School of Sculpture at Maryland Institute College of Art. 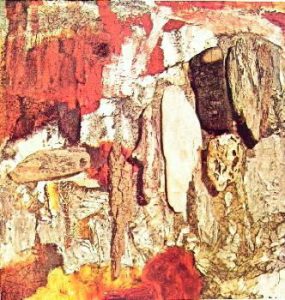 Soon, Jane began experimenting with diverse materials and techniques and was making “apertured” canvases that garnered much attention. Her style and output, some critics say, was not in line with the day’s trends of New York City artists and therefore her career’s imprint remained limited. Jane Frank’s preoccupation with space was evident even before her paintings became overtly “sculptural” in their use of mixed media. Her landscape-like, mixed-media abstract paintings are included in public collections, including those of the Corcoran Gallery of Art, the Baltimore Museum of Art, and the Smithsonian American Art Museum.

Secret society in Ukraine creates art under occupation; art conservators knew early on about climate change; and more from the newsHimmat Shah, Part 1: The poet of clay and ceramics