by adminin On This Daytags: born on this day, indian art, Indian Constitution

The creator of illustrations in the original final manuscript of the Constitution of India including the complete Preamble page, Beohar Rammanohar Sinha, was born on this day, 15 June 1929. He is also the one who played a major role in spreading Indian art in the Far East, and brought Oriental Art to India.

Born in the largest and most important city of British India’s Central Provinces, Jubbulpore (now Jabalpur), he was the youngest son of Beohar Rajendra Sinha who was a prominent journalist and a politician and spent numerous terms as political-prisoner during the freedom movement of India. Being a son to a politician and freedom fighter, the seeds of nationalism got imbibed in him since his childhood. Freedom fighters such as Mahatma Gandhi, Rajendra Prasad, Vallabhbhai Patel, Jawaharlal Nehru, Khan Abdul Ghaffar Khan, Vinoba Bhave were frequent visitors to his house. He pursued his graduation in fine arts in Kala Bhavana at Visva Bharati University, Shantiniketan from 1946 to 1950 and during his postgraduation he gained expertise in Fresco-secco; he gained specialization in Zen painting under Yu Wan-shan.

To represent Indian art in its purest form in the Indian Constitution, he made trips to places such as Ajanta, Ellora, Bagh, Badami, Sarnath, and Mahabalipuram. He included Vrishabha, a symbol of Indus Valley Civilization, and then made drawings linking Babylon, the port of the Sumerian civilization with Lothal (Gujarat), the port of the Indus Valley Civilization. The Swastika found in Persia was shown in the constitution. It states that the civilization of India was spread till Persia. The Natarajas of the Shaivite sect, the Konark Sun Temple of the Kalinga Kingdom of Orissa, the seals of Nalanda University, coins from the Golden Age Gupta period as well as landscape paintings depicting the diversity of India’s natural wealth were prepared for individual pages of the Constitution. He initially refused to sign the paintings but signed some pages after being insisted by Nandalal Bose. 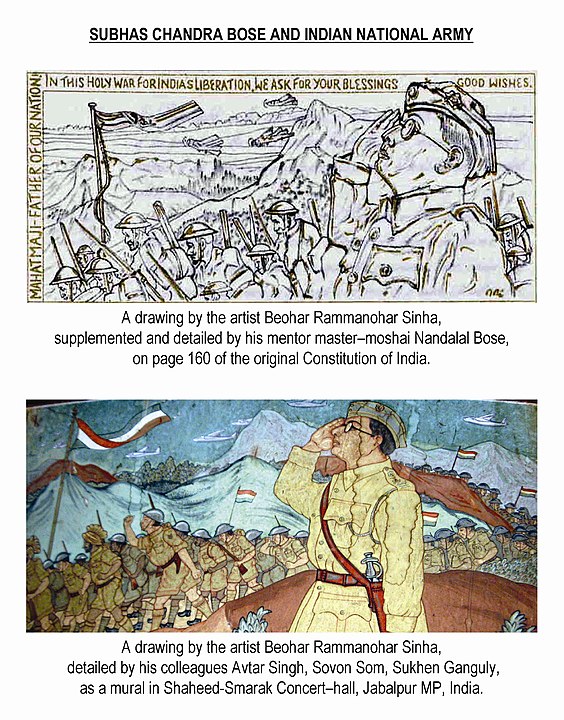 His frescoes also adorn the walls and the dome of Shaheed Smarak or Martyrs Memorial Concert Hall in Jabalpur. It depicts various episodes and landmarks in India’s struggle for independence starting from 1654 and ending with the unfurling of Indian tricolour on Independence Day in 1947. Paintings depicting the Quit India Movement and of Rani Durgavi preparing for a war against Akbar’s army are some among many paintings in the Shaheed Smarak.

Kala Shri Award in 2001; Veteran Artist Award by AIFACS in 1993 are some of the awards that he received for his contribution to fields of fine arts. His works are housed in numerous prestigious public and private collections throughout the world and his paintings have been auctioned alongside those of Hebbar, Husain, Raza, Souza, Pyne and others in New York and London by Sotheby’s. He died on 25 October 2007.

It’s a wrap! The artist couple who share a birthday, Christo & Jeanne-ClaudeAbramović to release her first NFT, Koons sculpture to be auctioned for charity, and more art news!