Robbie Williams is back at Sotheby’s, this time with his own collection!

Boy-band superstar Robbie Williams is progressively moving towards contemporary arts at a pace that is astounding many. Once known for his voice, Williams perhaps wants to be now known for his colour palette and makes no bones about how he wants to pursue the arts in a bold, experimental, and no-holds-barred manner. With the unveiling of 14 large-scale works at Sotheby’s London, co-created with Ed Godrich ((Black and White Paintings, until 25 May) under the moniker Williams Godrich, Williams has finally hit the art market hot.

According to The Art Newspaper, all 14 paintings—a swirl of white motifs on black canvases that allude to street art, are named Linda, Donna, Paula and Tracy, recalling Williams’s 1980s upbringing in Stoke-on-Trent, UK. According to reports, a painting co-created by Willians and Godrich sold to a private foundation in Central America, priced at £40,320. The prices for the Black and White Paintings, to be sold privately, are undisclosed. 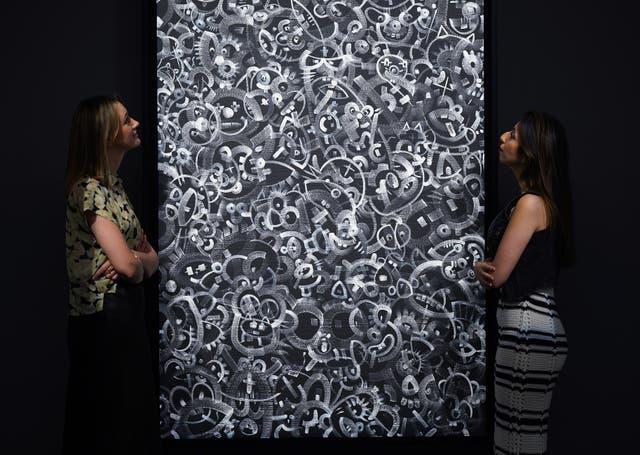 William has been apparently taking inspiration from many. Take his fascination with Bansky, for example. He was inspired to take on the project after seeing a documentary on the elusive street artist and claims that he went straight to an art-supply shop to get his work started. He also talks about Bob Dylan, who has also taken to painting. In an interview he is known to have said, “I look at Dylan’s stuff and think, ‘I could do that.’”

This is William’s second association with Sotheby’s in recent months. He has also been a Banksy collector and in March, this year, he consigned three Banksy paintings at Sotheby’s in London including Girl With Balloon (2006, est £2m-£3m) which sold for £2.8m.