There is a deep and interesting influence of realism (as well as impressionism) in the dense yet remarkably clear sketches made by artist Akbar Ali Sunasara, which capture the somewhat mofussil nature that can be found even in the heart of urban settlements. He professes that his artwork is an attempt to understand the world he inhabits, and a study of Islam and its ideologies has also influenced the pieces that he puts forth through the mediums of woodcut, linocut and more. Take for instance the work titled ‘Station 1’. What appears to us is a view we might be accustomed to out of a grimy lens, be it in a dilapidated building or a dusty train window, speaking volumes about the privilege of the viewer and where they are stationed when it comes to gazing upon the landscape that the artist conjures up. In this particular piece, as is seen in many others, too, structures are closely packed, and there is a sense of smoke and dust in the air, as one would see in any train yard. In ‘Freedom’, we see the addition of more human elements in varying and deliberately unrealistic scale, while the expanse of an old city area or small town stretches behind them. They are engaged in trading, playing and what looks like a misplaced instance of tourism by a foreign looking individual who looms over the local crowd in seemingly benevolent yet jarring, probing curiosity. 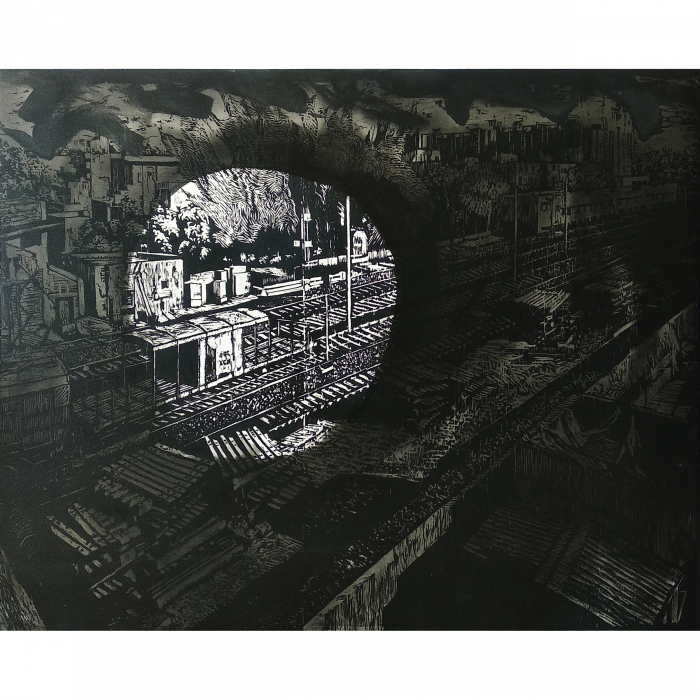 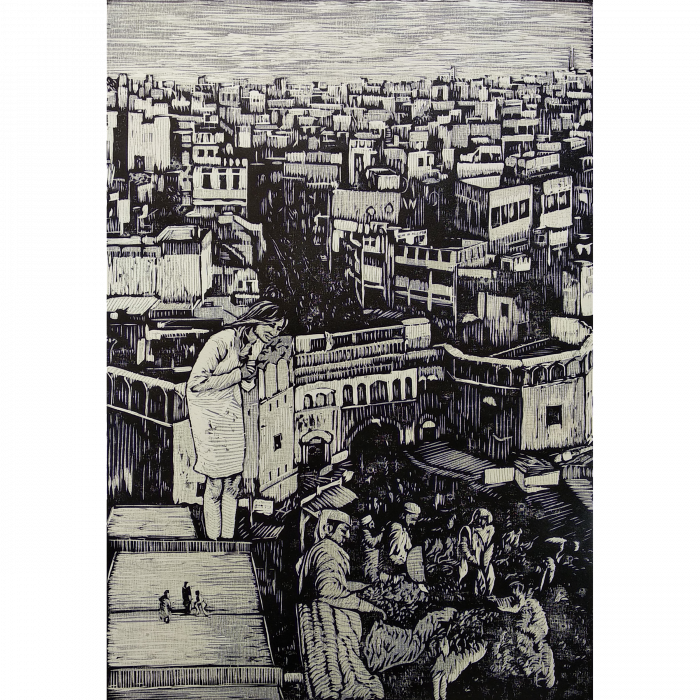 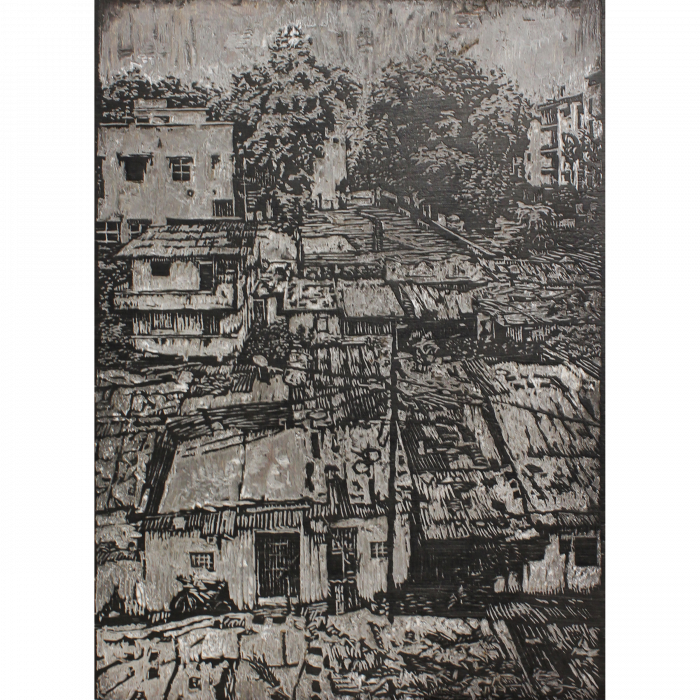 Ankur Yadav: The bleak calm of the end of days

There is an extremely distinct form of art that comes through in the works of Ankur Yadav, using oil on plyboard boxes. The artist has admitted to being moved by the aftermath of disaster and a deep melancholia while creating these abstract pieces. His landscapes are absolutely devoid of human presence, evoking an end-of-days fatalism and hopelessness — and strange calm — within a viewer. And yet, he manages to bring in diversity and depth of contemplation even to these bleak renditions. In ‘Realm Of The Black Sun 9’, for instance, one sees what looks like a road stretching ahead till the very horizon, where it either meets the sky or a tornado-like storm, signaling an end of sorts. On either side of this route, the landscape is dark and obscure, with absolutely no sign of humanity left. In ‘Realm Of The Black Sun 8’, there is a similar post-apocalyptic hush. But here, one is closer to what lies beyond the planet, getting a nearer look into space and the heavenly bodies it contains. Against a dark mountainous foreground here one finds moons or planets hovering in the sky, indicative perhaps of possibilities beyond the ceasing of life here. 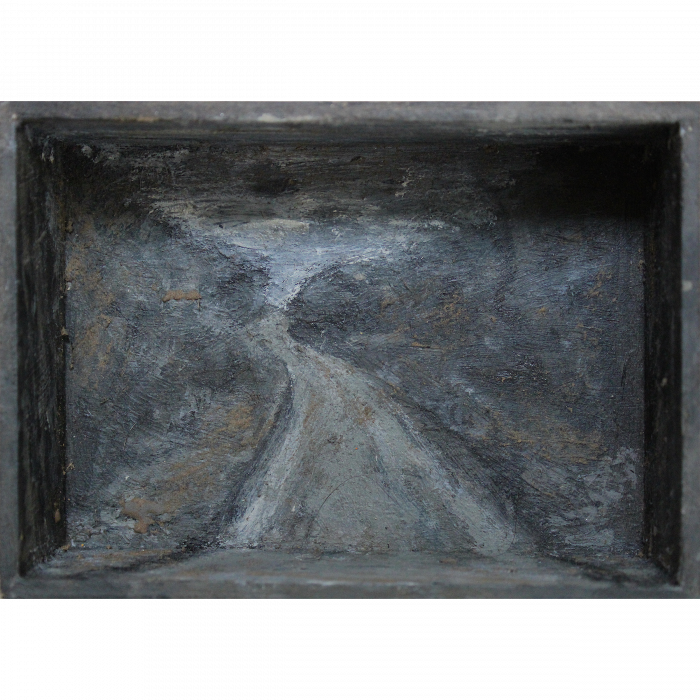 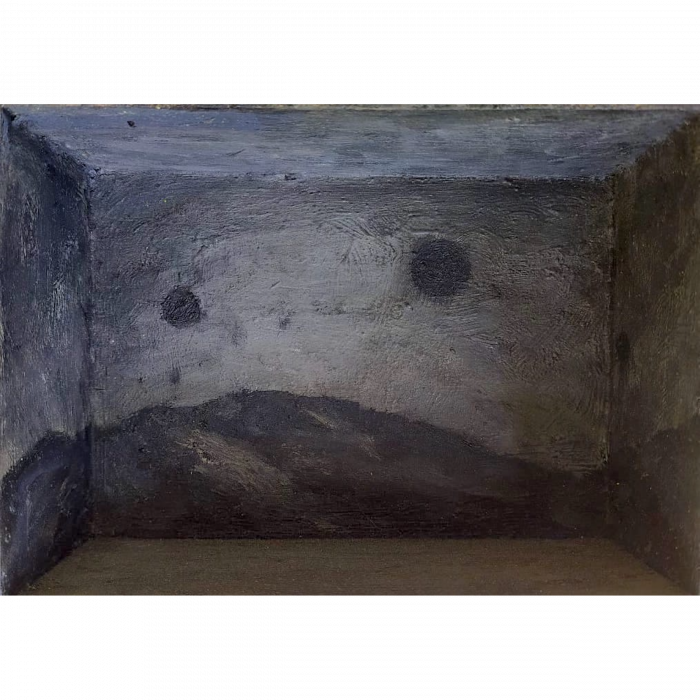 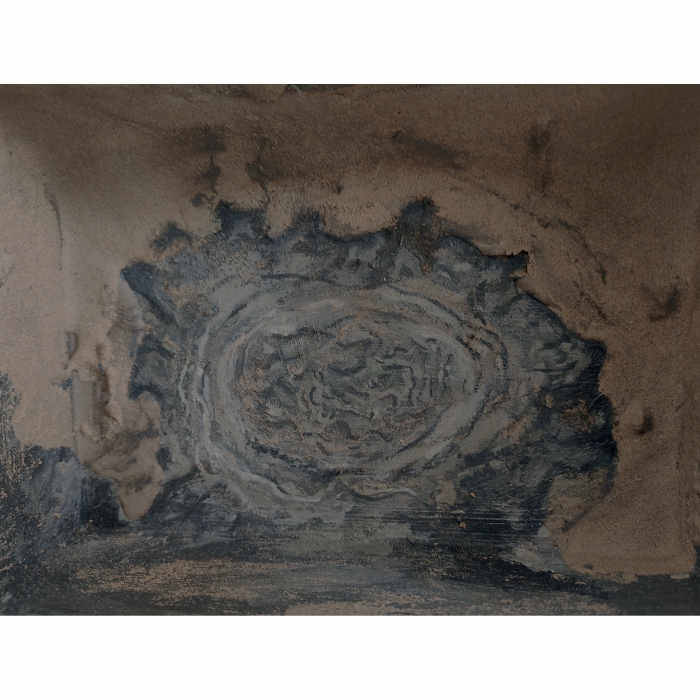 Born to art-loving parents, Bibhu Nath has had the joy of knowing art and having his world steeped in it right from his very childhood. This factor also brings to the fore an experience of rich Indian cultural heritage in his sculptures, which are wrought in ceramic, stone, paper and more. Later turning towards eco-conscious paper pulp as a medium of favour, it is coupled with chalk powder, synthetic resin adhesive and watercolors to bring his 3-dimensional pieces to life. Themes of village life, contemporary society, mythology, folk tales, and even changing climate uniquely find their voice in his small but power-packed art works — and in a way, this art is essentially the means Bibhu finds to reconnect with nostalgia. These pieces weave in familiar motifs, a pleasing symmetry of colour combinations, and a hint of quirk that is enjoyed aesthetically, making for art that would be comfortable in anything from modern to rustic set-ups. In ‘Waterscape II’, Bibhu uses mixed media to bring together four jacketed, headless busts, each shirted within in monochrome (red, orange, yellow and blue), with tiny bright green pockets. Perched above each is a bird of different colour and pose, holding something in its beak, catching a worm or just looking like it is trilling out a line. This zany use of hue and form juxtaposes with a sombre, traditional use of gray to bring in a stone or marble-like feel to the background. Similarly, in ‘Man With Four Hands II’, one gets a set of sculptures in a row, each set against a brick-stone like base, each a man with four hands carrying a sack that obscures his face — and each bag containing a different bounty. 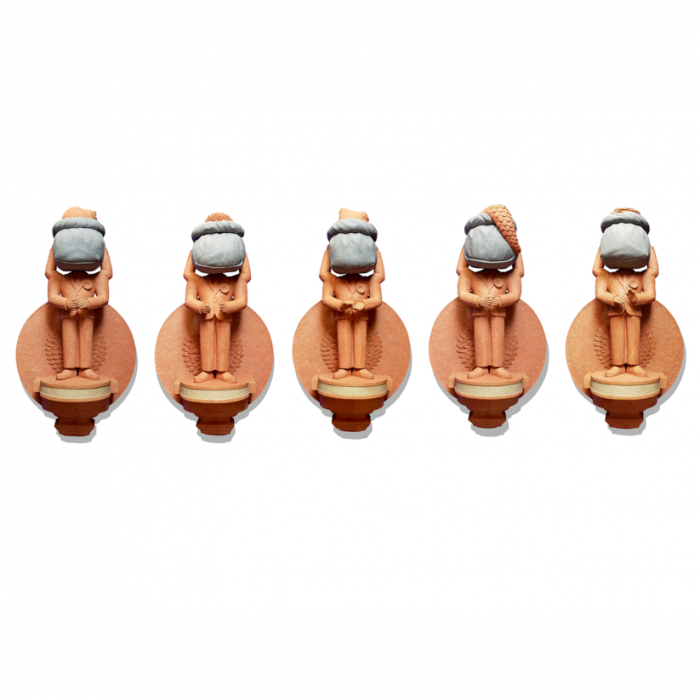 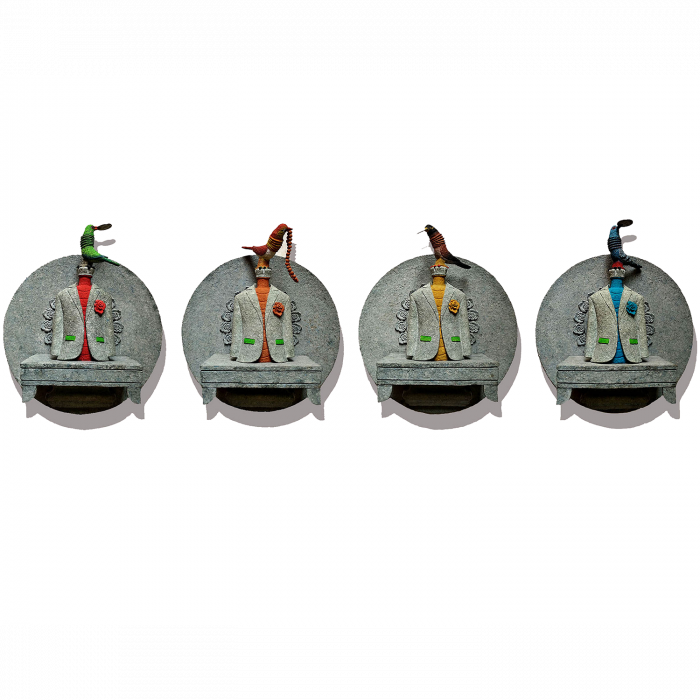 Folk motifs and artisanal symbols make for a fascinating influence when it comes to the artworks created by Krishna Padiya. As a native of Saurashtra in Gujarat, there is ample inspiration in the cultural history that surrounds the artist to draw from a wellspring of our understanding of ancient civilizations. The mediums he enjoys are also fairly diverse. Metal casting with bronze, marble, copper wire, and more is a favoured passion, but other sculptural options he utilises include stone, wood, ceramics and fiberglass. Ultimately, the forms that he evokes are abstract in nature, pushing the viewer to plumb into their and the artist’s understandings of the subject. Take for example the piece titled ‘Golden Age’ — it is a distinctly egg-like form, holding within it the caked, hardened evidence of ageing, which still manages to display some beauty and intricacy in the filigree of cracks it has developed. At its very heart, also bearing the patina of years, lies an undoubtedly precious core of metal, apple-like in its form, like the head of a key. In ‘Existence’, we stare at a shell formation set in stone, which appears as though it is opening up into a dark receptacle-like space with the clever use of black elements. Thin, shining copper wires are curved collectively into an almost marine fern-like assemblage, adding an apt compliment and contrast at the same time. 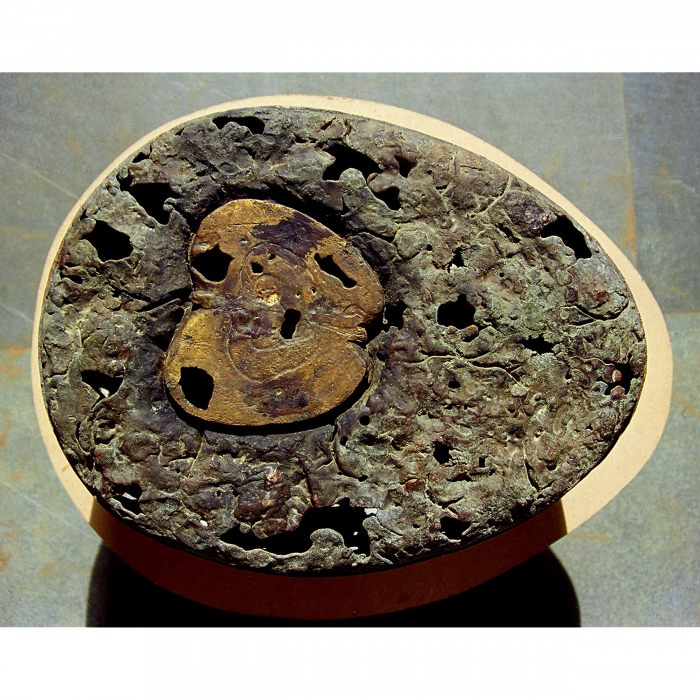 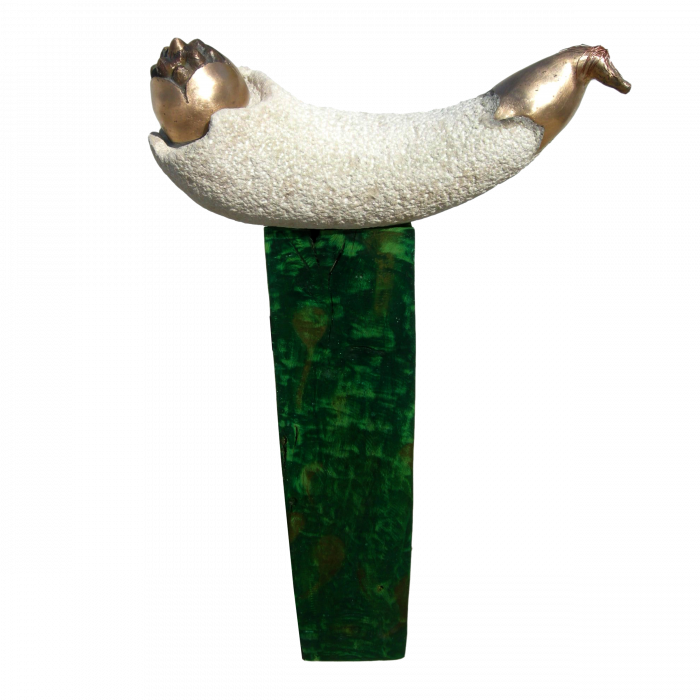 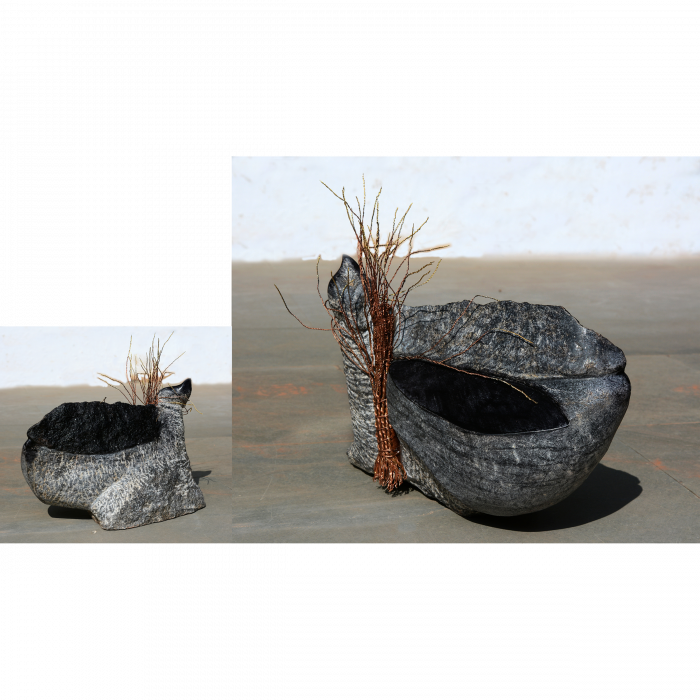