Two giants of the art world passed away this month in their ripe years — one a digital art pioneer, the other an art philanthropist

Herbert Franke, scientist, writer, co-founder of Ars Electronica and one of the earliest digital artists to create abstract digital art, dies at 95

Herbert W. Franke, Austrian scientist, writer, and one of the important early computer artists, died on 16 July in Egling, Germany. Franke created computer graphics and early digital art, starting in the late 1950s. During his lifetime, Franke witnessed momentous technological shifts and used his art to reflect and record these changes. Naturally, his practice evolved with technology and in the 1970s, he used the Siemens research lab in Germany to make early computer animations using interactive 3D systems. Decades later, he would begin to enlist blockchain technology to make NFTs on his laptop.

From 1973 to 1997 he held a lectureship in “Cybernetical Aesthetic” at Munich University; the subject was later to be called “computer graphics” or “computer art”. In 1979 and 1980, he lectured in “Introduction to perception psychology” at the Art & Design division of the Bielefeld University of Applied Sciences. In 1979, he co-founded Ars Electronica in Linz, Austria. In 1998, Franke attended a SIGGRAPH computer graphics conference in Orlando and was a juror at the “VideoMath Festival”, Berlin. He also took part in innumerable performances and presentations. 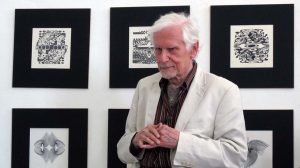 Franke left behind a rich and important legacy in the field of digital art, most notably when it comes to generative art. Franke found generative art to be of such great appeal and potential because it made the beauty of math visible. His early series “Dance of the Electrons” (1959), was made using an analogue computer and a cathode-ray oscillograph that converted electronic signals into images, producing ghostly, grey-scaled graphics, notes ARTnews. Later on, the newspaper shares, Franke would use drawing machines and computer plotters to draw simple algorithms that he programmed. In 1970, he used a newly developed Siemens computer, the 4004, to create the series “DRAKULA” (1970-71) which used the mathematical theory of dragon curves to create variations on a fractal pattern. In 1979, he cofounded Ars Electronica, an interdisciplinary research institute for new media art which hosts an annual tech and arts festival. He remained actively engaged with it till his very last days. 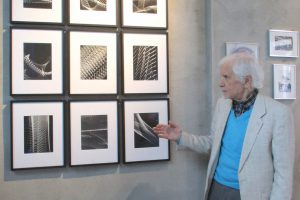 Last June, Franke participated in Art Basel with his MONDRIAN (1979), a program that he developed for Texas Instruments, which creates coloured box and line compositions that are a nod to Piet Mondrian’s abstract paintings. In 2017, the ZKM Center for Art and Media in Karlsruhe, Germany, acquired Franke’s archive, which contains sketches, correspondence, and a variety of other documents that reflect his passions as a science fiction writer, computer artist, and dedicated caver. Earlier this year, Franke’s work was the subject of a retrospective at the Francisco Carolinum in Linz, Austria. Read more at Ars Electronica.

Lily Safra, a major art collector who bought what was at one point the most expensive sculpture in the world, has died of pancreatic cancer at 87. The news of her death was first reported by the Edmond J. Safra Foundation, where she served as chair. Safra was featured in the ARTnews ‘Top 200 Collectors’ list each year between 2004 and 2018. After her fourth marriage, to the banker Edmond Safra, who founded the Republic National Bank of New York, Lily gained access to New York’s high society in the 1970s. She soon became a prominent figure and came to be known for her philanthropic work.

The couple acquired a valuable modern and contemporary art collection, which at one point included a sculpture by Alberto Giacometti. Safra reportedly paid a then-record price of $103 million in 2010 for the Giacometti, making it the most expensive sculpture ever sold at the time. The couple donated to causes meant for educational, scientific research, and health initiatives. They supported a children’s hospital in Israel, endowed a chair in the neuroscience department at the Imperial College London, and contributed toward an ethics center at Harvard University. Following Edmond Safra’s death from asphyxiation during a fire in his Monaco residence, Lily inherited around $4 billion.

In 2011, she gifted a $21 million abstract painting by Gerhard Richter to the Israel Museum. Lily sold off many of her personal belongings for multimillion-dollar sums at Christie’s and Sotheby’s. Many of the proceeds went to charity. She raised $38 million through a 2012 jewelry sale at Christie’s in Geneva for the Elton John AIDS Foundation, the Paris Opera, and Paris Ballet, among other organizations. Notably, she was a recipient of the French Légion d’Honneur award and a trustee of New York’s Museum of Jewish Heritage. Read more at ARTnews.com.

Edgar Degas: The indoor ImpressionistFarewell to a vision of monumental whimsy: Claes Oldenburg passes away at 93