Whistler: The artist whose titles for paintings were inspired by music

by adminin Newstags: #Artists, art, artist, born on this day

The artist recognized for his paintings of nocturnal London, for his advanced full-length portraits and for his brilliant etchings and lithographs, James Abbott McNeill Whistler was born on this day, 11 July, 1834. He is known to have influenced the art world and the broader culture of his time with his theories and his friendships with other leading artists and writers.

Born in Lowell, Massachusetts, Whistler came from a family of doctors and engineers. He moved to St. Petersburg in 1843 where he took private art lessons and later on enrolled himself in the Imperial Academy of Arts. He worked as a draughtsman in his first job mapping the entire U.S coast for military and maritime purposes. The maps were characterized with the drawings of sea serpents, mermaids and whales on the margins. He then spent short time at the Ecole Impéeriale learning traditional art methods.

Whistler’s first famous painting, ‘Symphony in White No. 1: The White Girl’ was executed in 1861 at Paris. It became a huge success when shown at the Salon des Refusées in 1863. His journey to Chile in 1866, while the country was at war with Spain, produced his first three nocturnal paintings which he termed “moonlights” and later re-titled as “nocturnes”. Whistler credited his patron Frederick Leyland, an amateur musician devoted to Chopin, for his musically inspired titles. He also began to re-title many of his earlier works using terms associated with music, such as a “nocturne”, “symphony”, “harmony”, “study” or “arrangement”.

His most famous painting ‘Arrangement in Grey and Black No. 1’, now popularly known as ‘Whistler’s Mother’, when created in 1871 faced a lot of backlash because of its anti-Victorian simplicity during a time in England when sentimentality and flamboyant decoration were in vogue. He did his best in promoting the picture and it was ultimately purchased by the French government. The painting is now housed in the Musée d’ Orsay in Paris. During the Great Depression period, the picture was billed as a million-dollar painting and was a big hit at Chicago World’s fair, held during 1933-34. In 2015, New Yorker critic Peter Schjeldahl wrote that it “remains the most important American work residing outside the U.S.”

An interesting visual characteristic about Whistler’s paintings is that the signature on his paintings was just as distinct and popular as the paintings themselves. The signature took the shape of a stylized butterfly possessing a long stinger for a tail. 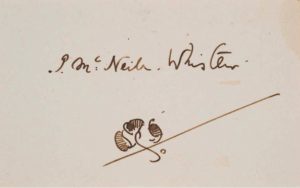 James Whistler died on July 17, 1903. In the early 1900s many noteworthy critics and connoisseurs of art considered Whistler to be one of the leading painters of the day. Within a relatively short time, however, the fame and acclaim of this versatile artist faded away, and only in the last decades of the 20th century did his renown begin to emerge.