Worshipping nature, focusing on food and exposing gender bias: Our Artists Of The Week

Home / Artists of the Week / Worshipping nature, focusing on food and exposing gender bias: Our Artists Of The Week
August 10, 2021August 10, 2021

There is a delicacy in the mixed media works of artist Pradnya Khandgonkar that is redolent of earthiness and attention to detail. The artist professes that most of her art gives importance to the themes of nature and womanhood, primarily because she believes that these two forces ensure the propagation of the cycle of life. This idea bursts through in the form of various shapes and forms and their amalgamation, emphasizing at each juncture how crucial nature is to life. Pradnya also manages to harness a clear and masterful way with surrealism in her art pieces. In ‘Wait And Watch’, for instance, a cactus blooms, eye-like, over a clock. The motif of the eye is peppered throughout this artwork that is based on a muddy brown-sepia, parchment-like background. The cactus is stark but verdant and peppered with the promise of life in the form of tiny pink blossoms. At its heart is the portrait of a girl’s face, staring at the viewer; the pot emphasises the date of a year. The artwork almost seems autobiographical in nature, a testament to the unstoppable march of time in one’s life. Another interesting piece is ‘C.C NO.1 IMPERIAL MAJESTY’. This one is more intricate and complex, with multiple motifs of flora and fauna and other natural phenomena brimming inside a bottle-like shape, with small pops of colour drawing the eye of the audience, clearly indicative of the cornucopia of life (the letters L, I, F, E embedded at multiple locations in this painting emphasise the same) — the outside is more nebulous, awash with faded sepia forms that seem to be keeping watch from another dimension. 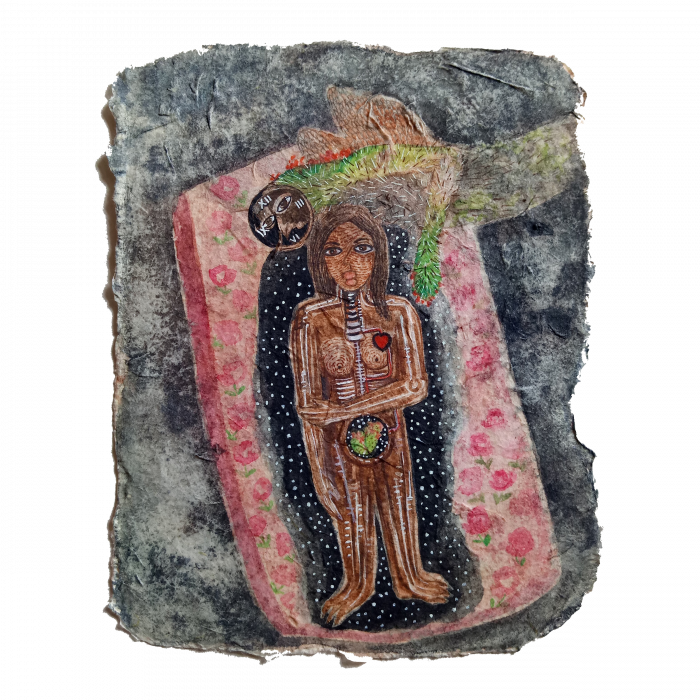 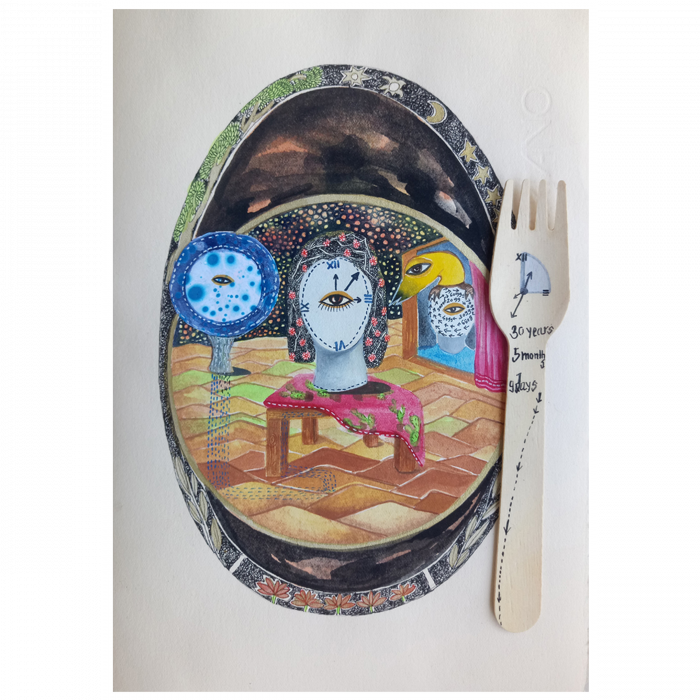 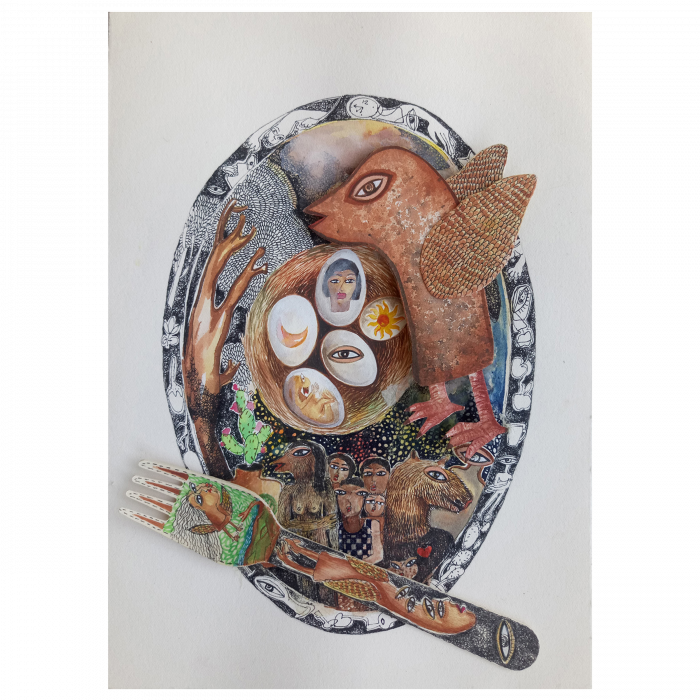 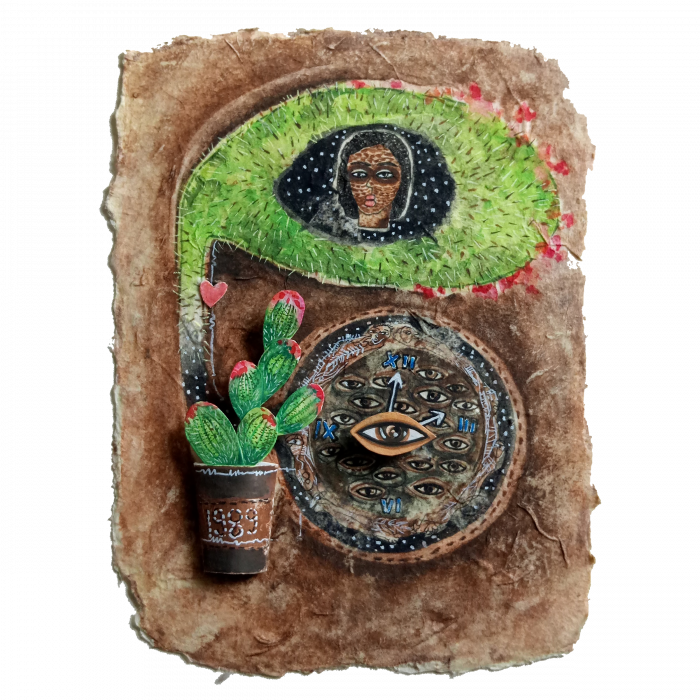 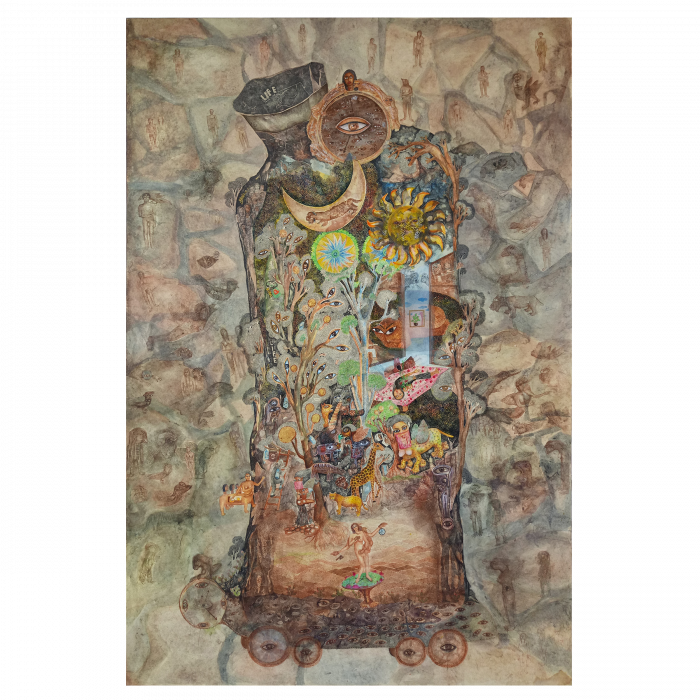 Oftentimes, the beauty of nature need not lie in spectacular grandeur, but in its finest of micro-details. This is something that artist Ramprakash Yadav brings to life with the recurring motif of trees, especially their trunks. The artist taps into the fact that humans take sundry perspectives of trees, whether social or communal, or environmental, or economic. Using Van Dyke Brown dry pastel backgrounds and coloured ink pen renditions for the flora (which he says are materials both accessible and reliable for outdoors sketching), Ramprakash pays an ode not just to the life-giving qualities of trees, but also to their oft-ignored incredible — and highly soothing — beauty. In ‘Last journey of final station’, one can see the debris of axed wood lying obscured on the ground below, even as a full, ghostly tree trunk levitates above it, poised either in the act of transcending to the heavens or crashing to the earth below. The floating entire trunk’s bark is paler, pinker and somewhat more ethereal, compared to the dry, earthy brown hewed bark below — perhaps the artist’s commentary on the final moments of any living trajectory. In ‘Delonix Regia’ as well, ethereal pink blossoms come alive, but even more intricate are the tree barks themselves, with patterns and whorls and colours and shades painstakingly wrought onto each millimetre in a wide range of aesthetic manifestations. There is a sakura-esque joy this piece brings to the viewer, which is possibly the spring-like, blossoming hope that the artist looked to put on paper. 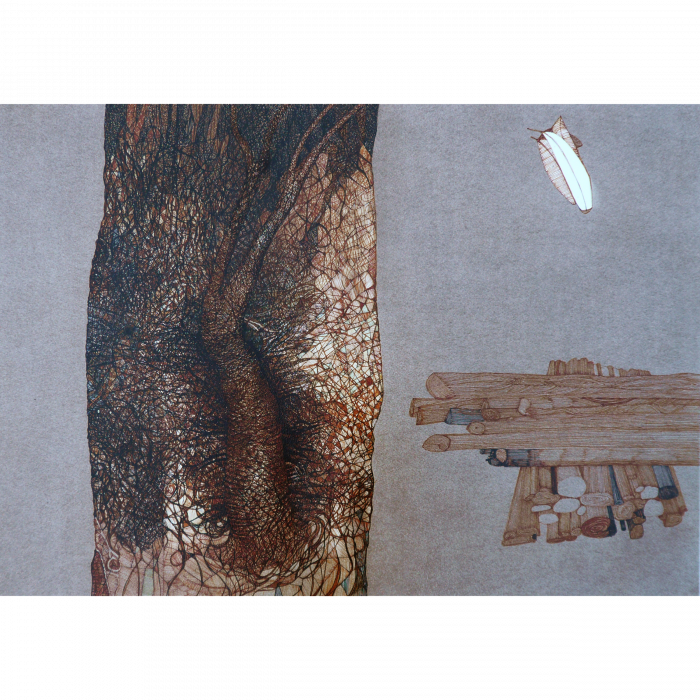 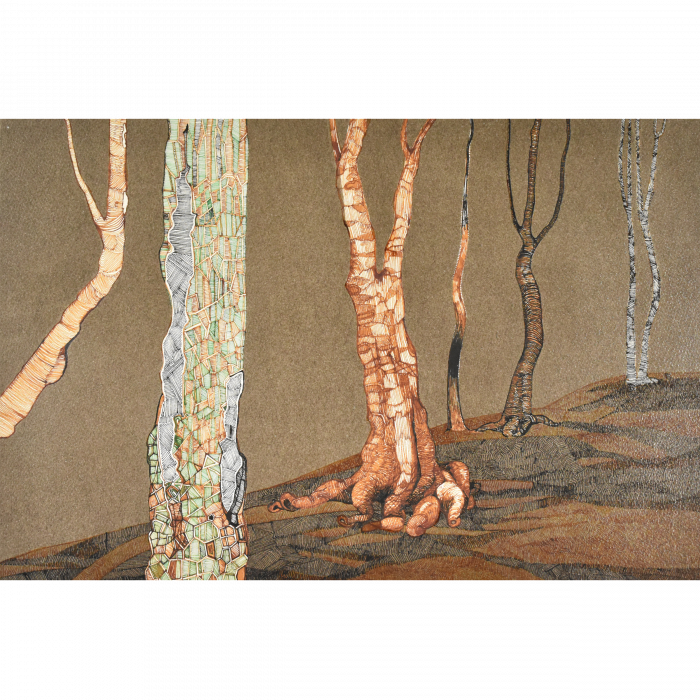 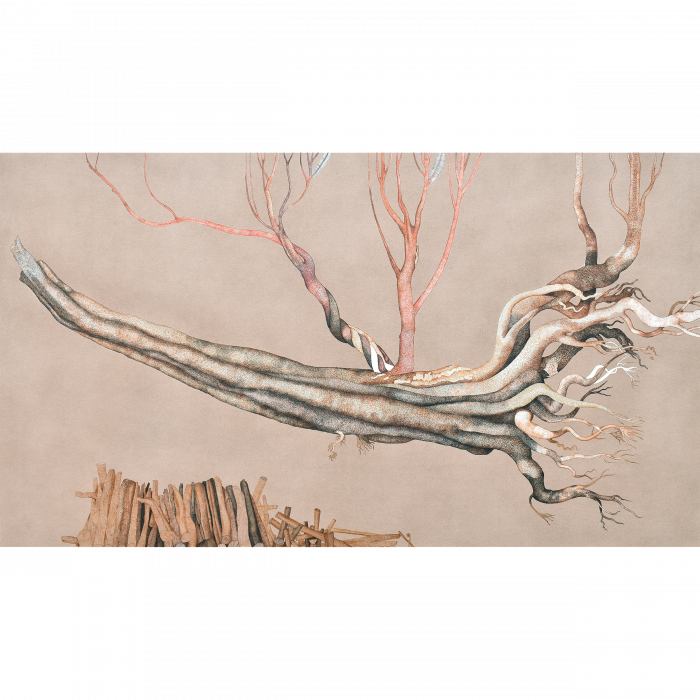 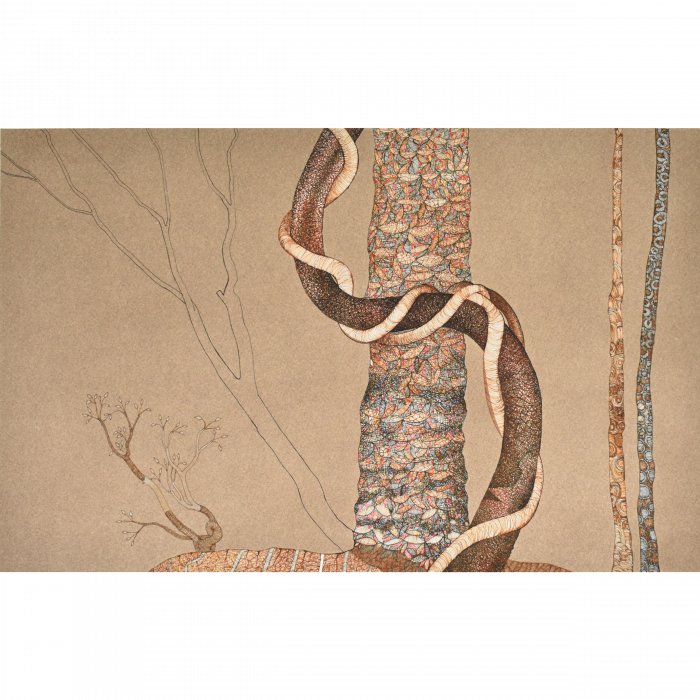 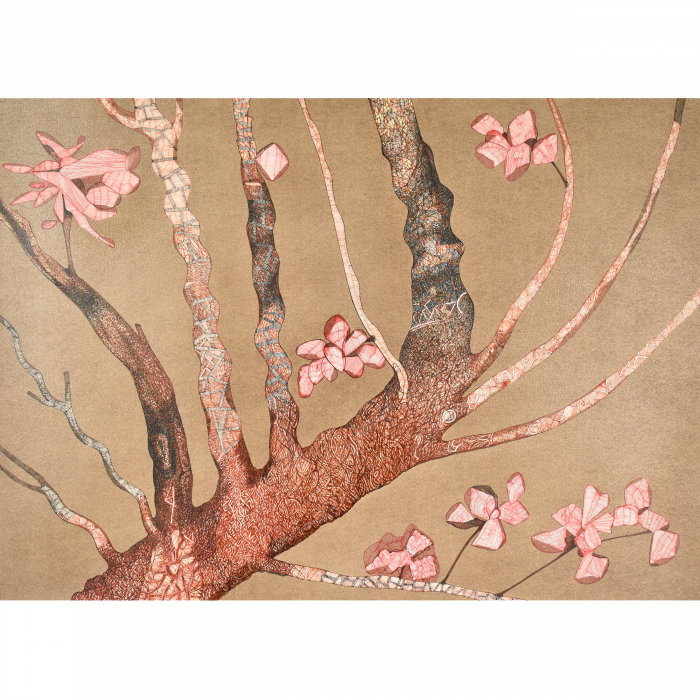 A relevant and powerful theme underpins the foundation of the works made by artist Rinku Chodhary, using gouache, acrylic and pen on rice paper — it is that of gendered suppression. While not directly depicting these issues, the art shows common scenes from households, situations that many have experienced without even realizing that gender injustice is at hand. There is a feeling of confinement that is rife in Rinku’s depictions, and the environment of a house plays a pivotal role in all her work. The repeated figures of women sitting caged in is a metaphor for the life of one who may end up doing the same thing every day for the rest of her life. The presence of the male and female body alone in separate works and questions about the depiction of the artist’s own emotions are a crux for her pieces. This can be seen in ‘Partner’ — it is a faded depiction of a man and woman seated across a table in the room of a house, staring at each other. The stillness and boredom of the characters shines through, amplified in the pale colours utilised. In ‘Who I am’, there is a hint of more vivid colour, but a sense of monotony shines through nevertheless. Nebulous forms coalesce within a finite frame, speaking of chaos and complexity, along with a hint of sorrow. 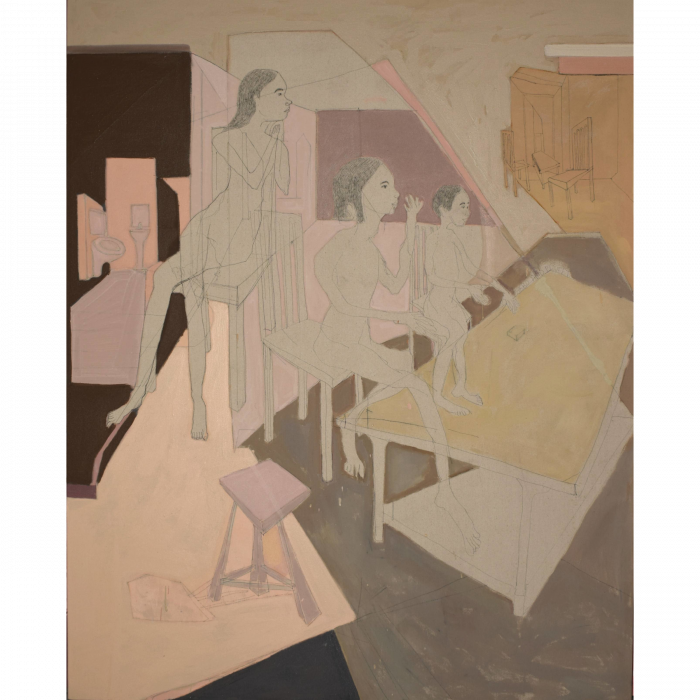 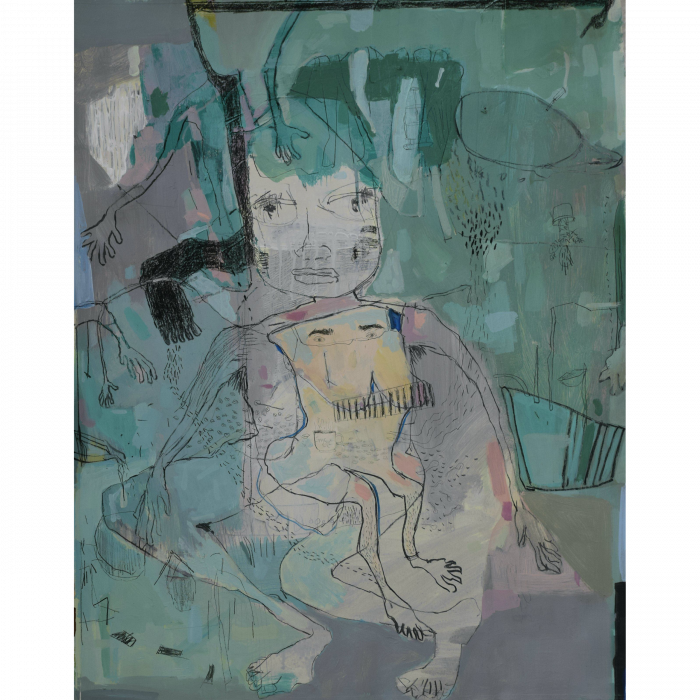 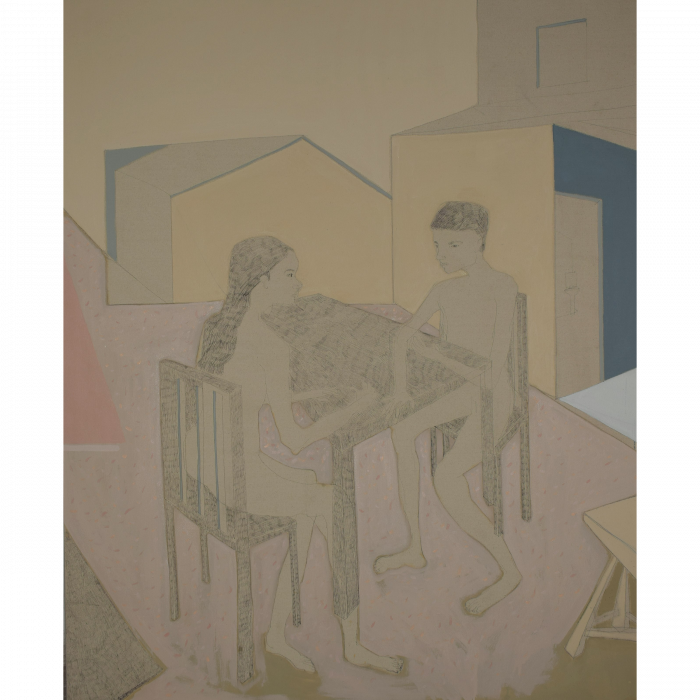 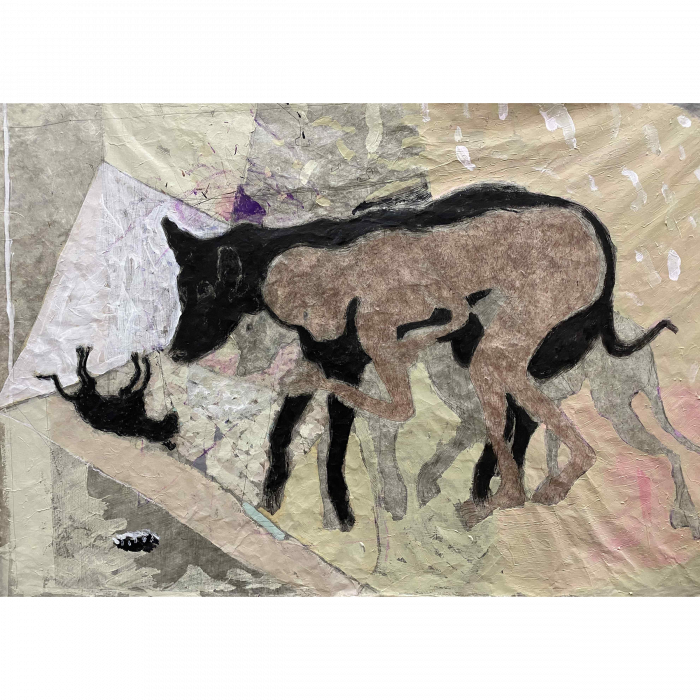 Satyanarayana Gavara: Art that serves as food for thought

In keeping food as a centrepoint in this works, artist Satyanarayana Gavara manages to encompass a wide range of interpretations of the theme that he considers a socialized element in everyone’s day-to-day life. According to Satyanarayana, food is both essential to our survival and one of the greatest pleasures we experience — he uses large-scale colour woodcuts and small-scale etchings to depict the same. Quintessential to his renditions is the fact that food takes on myriad forms, such as hunger, hope, irony, tragedy, struggle and lots more. In dissecting an artwork from his widely ranging pieces, one’s eye falls on the woodcut artwork titled ‘Time to eat’. It is a most unexpected rendition of what the average observer may expect in food as a focus. And yet, the captured moment has a huge sense of commonality with many, evoking one’s life in school and the most favourite part of the daily academic schedule for many — aka the lunch break. The piece itself shows us a shut and locked wooden door, drawn in a detailed manner. Before it sits a squat and basic cloth schoolbag, mostly reminiscent of humble and rural backgrounds, within which is stuffed a chalk-lettered slate and some books — the sack has clearly been hastily plopped at the spot, as its user/owner runs off for the more delightful pursuit of a meal and some bonhomie and play. On the other hand, the lithograph ‘Slipping Out I’ takes on a wholly different interpretation as well as manner of depiction. Here, we see a wheeled, hand-drawn straw cart upturned towards the sky, spilling out its plentiful vegetable contents onto the ground below in a moment captured just as the tragic wastage is poised to begin. The black-and-white scene come through primarily in hues of gray, juxtaposing light and shadow in a seamless way. 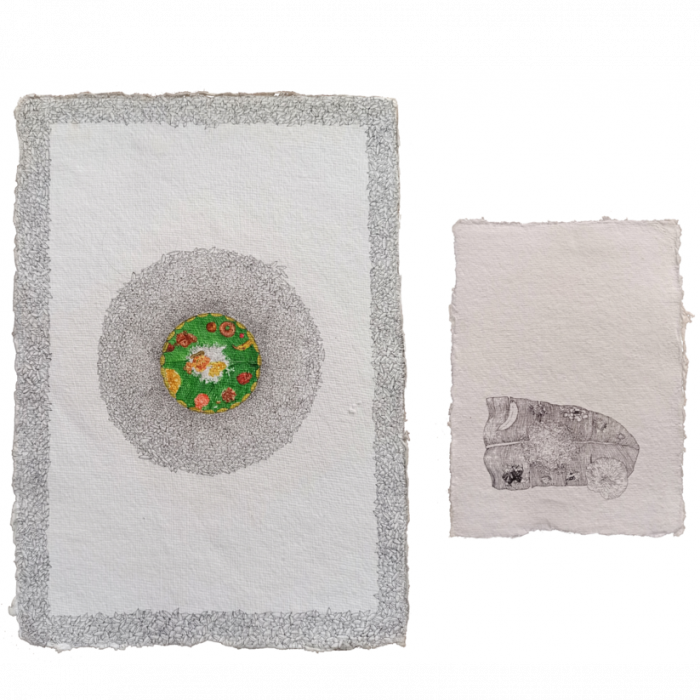 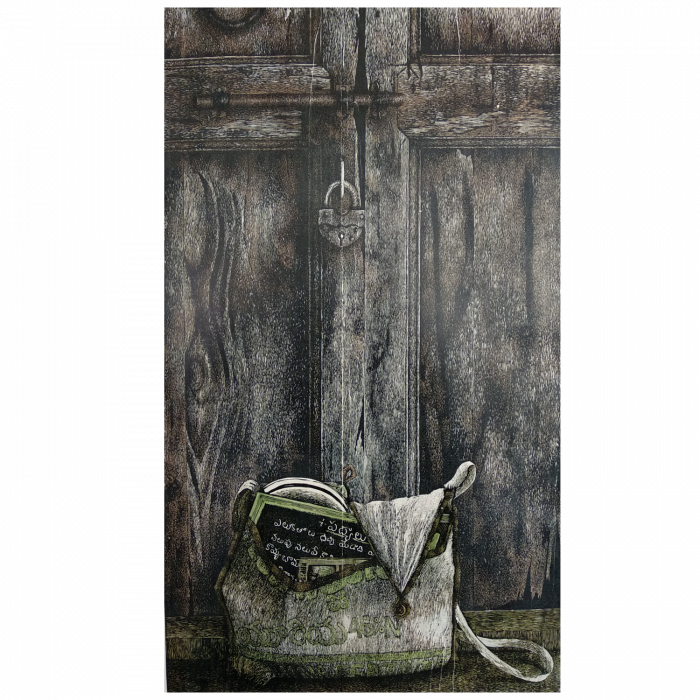 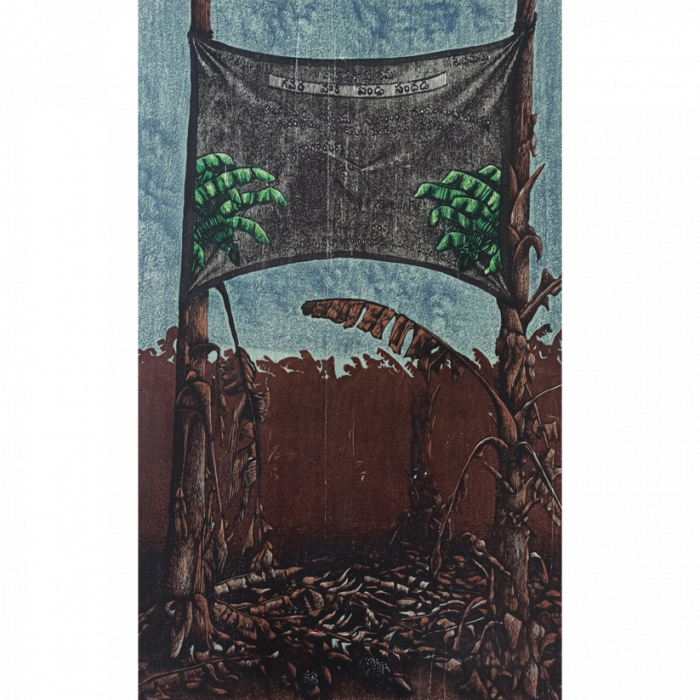 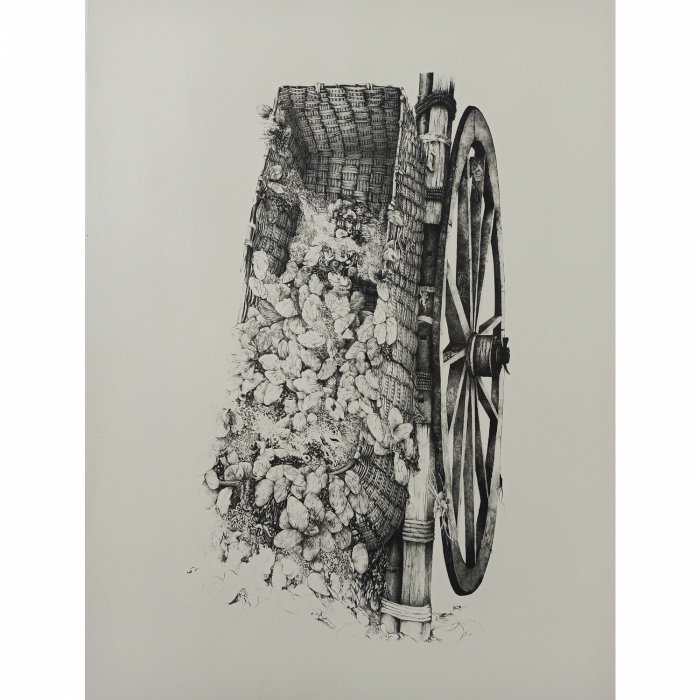 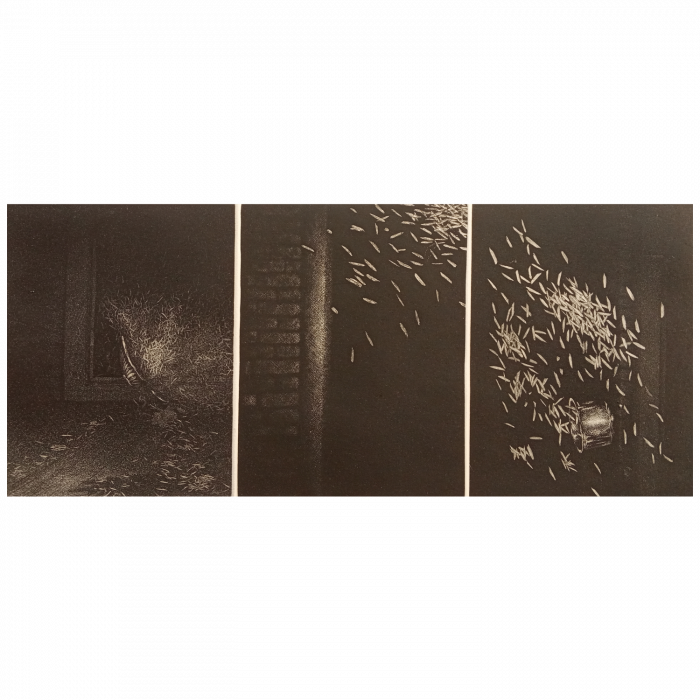