In a series documenting the arts practice of emerging artists, we check out what’s happening in Delhi. Abir Pothi reports! 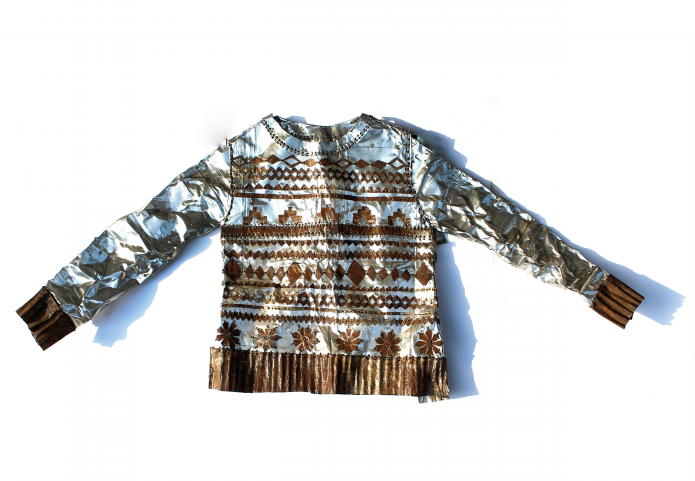 She remembers how she sat in a corner of her dormitory, under a dim light bulb, dabbling with water colours. This soothing exercise was her only respite as she studied at a boarding school, a gurukul rather, in a village in Haryana. The girls had no contact with the outside world, artist Richa Aarya says, and education was only a stop-gap arrangement till they grew “old enough to get married.” Early influences often define the choice of one’s themes and media and such is the case for Richa. She uses iron and literally stitches together foils of metal on iron sheets to make artworks whose frequent themes are the domination of women. The technique of stitching on iron, using brass wires, is something that Richa does to pay a tribute to the women she saw growing up; their only source of income was stitching and they pursued this vocation diligently just to earn a little income that was “completely their own,” Richa says. Artworks titled ‘Conceal Pain,’ ‘Lack of Choice,’ and ‘Skin Cover’ all touch upon variant themes of discrimination or abuse that women face. You can check more of her artworks here. 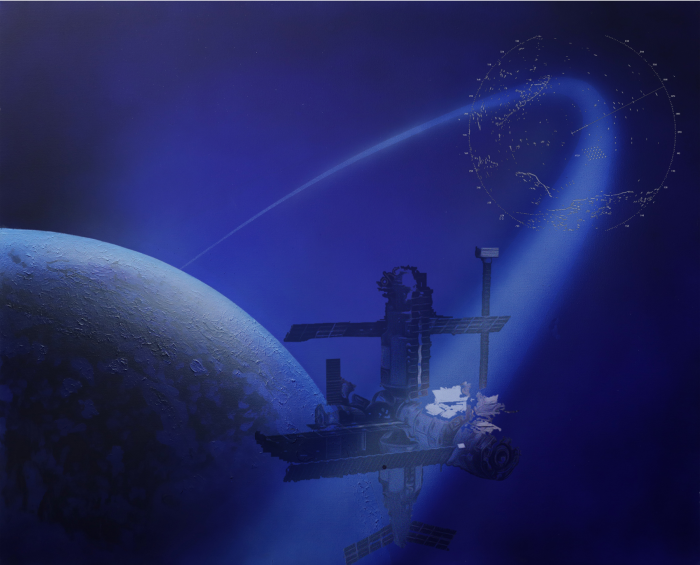 During his childhood, he climbed up wooden ladders, supported against public spaces. He held onto buckets of paint as his father painted signboards and film posters in Bhatinda, Punjab. Harmeet Rattan’s early brush with paint and brush would become a life-long affair. After completing school, he pursued a BFA in Sculpture from Government College of Art, Punjab University and an MFA in Sculpture from the University of Delhi’s College Of Art.  Themes of mass surveillance, and how it makes our lives vulnerable, populate the body of work created by Rattan, based in Noida. His works emerge from ideas of being constantly being monitored at a time when gadgets are omnipresent. Take his paintings, for example. A mysterious silhouette of a satellite hovers in deep blue and black night skies. A space shuttle glides by the edge of the planet. There are allusions to interstellar space, satellites, and unusual war elements like hybrid drones. The aerial scenes are predominantly in ultramarine blues and black. From cell phones, to cameras, to drones, Rattan is fascinated by how the far-reaching web of technology has firmly entangled a large chunk of the global population and one’s privacy may be just a click away from getting compromised. He notes that information may be used to intimidate us or suppress opposition. He is also interested in themes of global conflict and creates. Influenced by leftist ideology, many of his paintings also have a strong socio-political theme. See more artworks by Harmeet here. 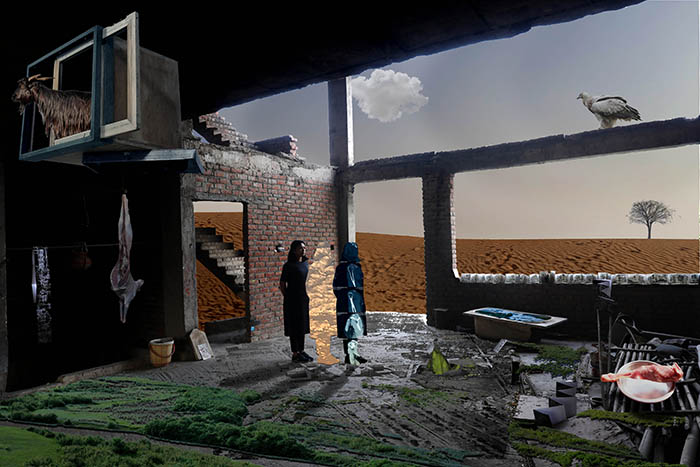 Noida-based visual artist Aditi Aggarwal explores and expresses the idea of repetition, beauty, and spontaneity through bookmaking and painting formats. She also plans to create works using images created with analogue format and alternative forms of photography. Through these collages, Aditi is attempting to merge multiple viewpoints and creating visuals that revolve around an understanding of everyday perception to represent an imaginary world that is both utopian and dystopian. She wants to blend the images of hybrid beings including human, plants, and animals in ever-changing relations of familiarity. Currently, Aditi is a research scholar at the Faculty of Music and Fine Arts, University of Delhi and serves as a visiting Assistant Professor at the Department of Painting, College of Art, New Delhi. She got her undergraduate and masters’ degrees in painting from College of Art, University of Delhi. She won several awards, gotten the prestigious Lalit Kala Academy Garhi Grant, and has participated in a residency project in association with Visva Bharti University, Shantiniketan and other institutions. She has also presented and presented papers at research seminars. 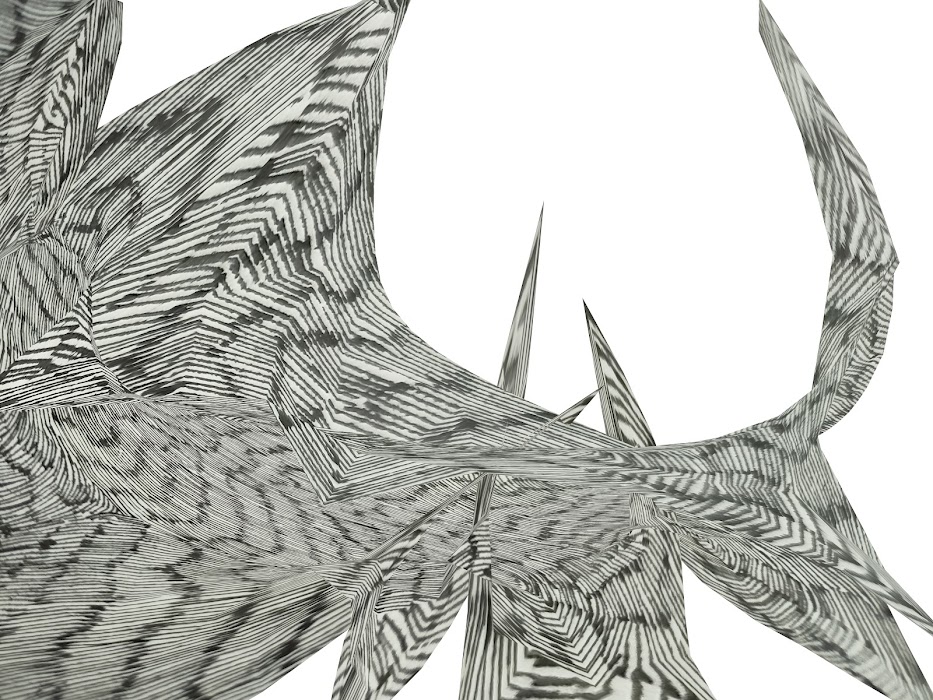 Born in Bangalore, Sneha Patel obtained a commerce degree before studying  fine arts from Kurukshetra University. She is currently pursuing masters from Sarojini Naidu School of Arts and Communication, Hyderabad University. She has worked with paper pulp, water colours, video art, and photo manipulation. Belonging to a defense background, she has had many cross-cultural interactions that have framed her sense of aesthetics and her approach to work. When she began her art practice, she dealt with the themes of the exploration of the conscious and subconscious states of her mind. She tried to find her own way of meditation through art and wants to explore the theme of emotional intelligence someday. Hugely influenced by Waqas Khan, a contemporary Pakistani artist, she found drawing intricate lines in continuous manner to be helpful in her personal life; his work also helped her to develop her art language. Over time, her works have moved from inwards to outwards, exploring external phenomena. She is trying to interpret layered experiences that dictate the sensitivity of lived experiences.