Engaged in many pursuits, young gun from Goa Sidharth Kerkar hails from a family of artists, including his grandfather Chandrakant Kerkar and father Sudobh Kerkar, installation artist, sculptor, and founder of an expansive art museum and gallery, Museum of Goa. Having had such exposure to art it is but obvious that Sidharth’s artistically inclined upbringing now shapes his outlook towards his budding arts practice. Gauri Gharpure reports.

His early memories of being introduced to the understanding and appreciation of art by his father are rather endearing. “Even when I was very young, I would always go to my father’s studio. Invariably, I would be given a tiny canvas to sit and paint on as he continued with his work,” Sidharth recalls. When he started going to school, the same instinct to sketch and draw got him in trouble. He would cover his text books with sketches and ever so often his teachers would call his father to the school to complain. “It was a thirsty hand wanting to sketch,” he says, recollecting those formative years. 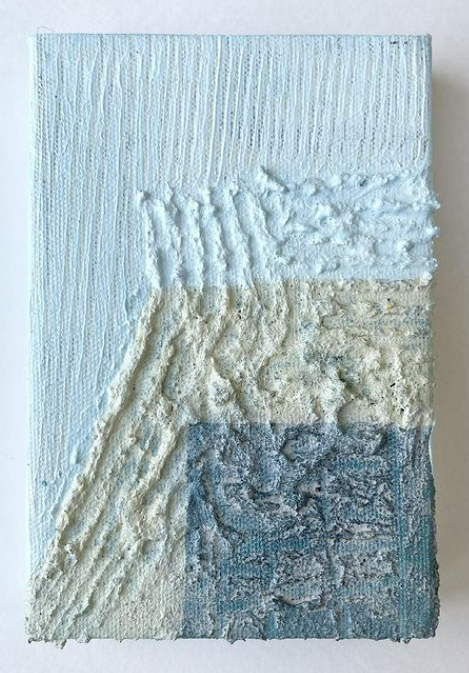 Sidharth concurs that his early interactions with his father gave wing to his innate artistic sense and influenced his approach in perceiving art. “Growing up I have always travelled with dad looking at art exhibitions and art fairs. By the time I was 18, I was already three times to the Venice Biennale which is the biggest art event in the world. Travels were not simply about holidaying but seeing art. I slowly started finding my style within what I like; I started using non-paint, experimentation with materials and media,” he says. Other media he has recently used is cement and saw dust happens to be a favorite to make textured works. 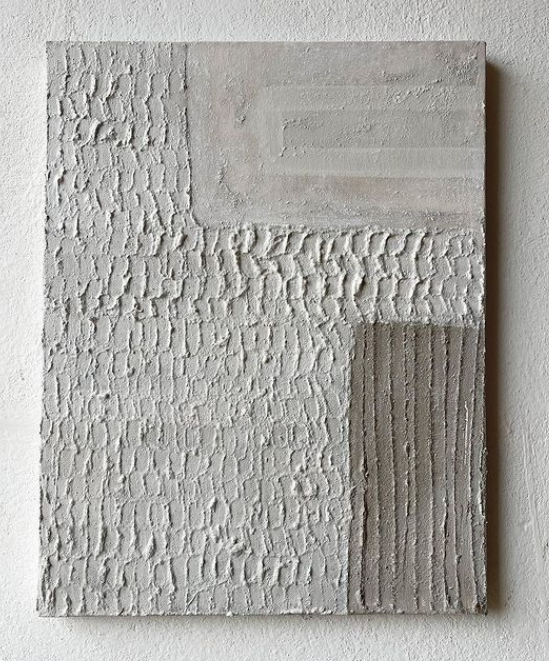 Sidharth believes art is one of the highest forms of communication and provides new perspectives of seeing things. Artists are communicators of ideas, he says. In the same strain, he uses his work to provide alternative perspectives on recycling to his audience. Reusing and upcycling are his pet causes and during the lockdown, he worked on a series of artworks that were created from Amazon cardboard boxes and tape. Another such series was works made using slippers found on Goan beaches. He also loves working with copper and this fascination took wing while he was studying at Chelsea College of Art in London. “I really liked the metal work studio. Some of my most successful series have been with copper. I know how to colour copper in almost 20 different ways – blues, greens, oranges, turquoise and more – I spent two years of experimenting with chemicals to get different colours.

Talking about the four years that he spent in London studying art, Sidharth says he learnt more from the vibrant city and its museums than actually from the classes. London, in a way, became his muse. He seemed to be throbbing with ideas and an intense will to experiment at the time. “ If you have a creative block it is because you don’t see enough, learn enough, read enough,” he says. An important takeaway from the course was documentation; he learnt how to photograph artworks in the right way to bring their true essence out. This learning is certainly paying off. “I get 95% of my sales through Insta today. I work with a professional photographer at least 20 times a month, and 20 times a month I paint. Most of my works take 2-3 months to create and if I am in the mood, I create more than one work,” he says. 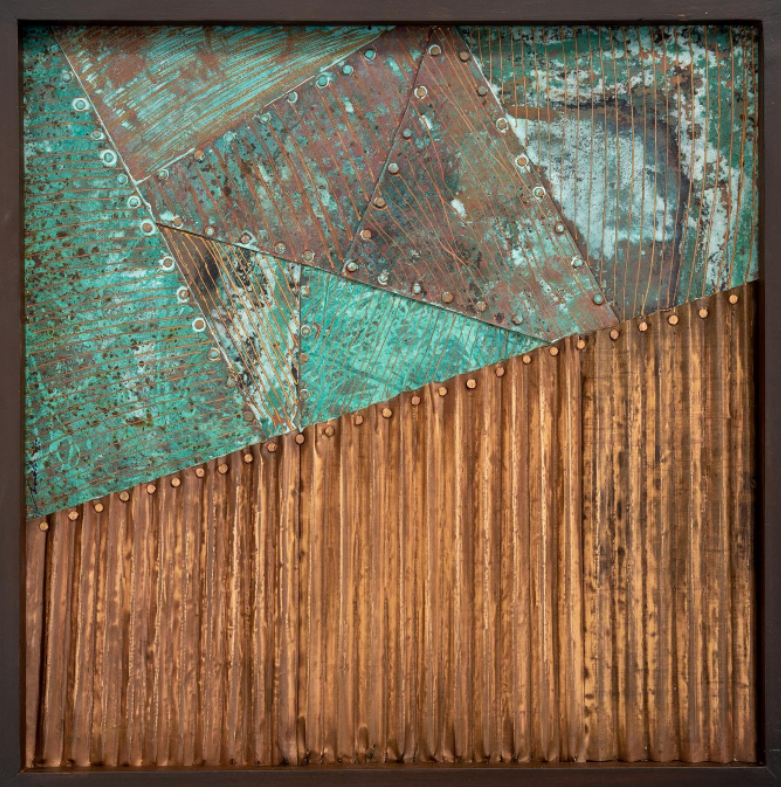 One of the biggest imports from Sidharth’s exposure in London was the organization of the Goa Affordable Arts Fair that was organized at Museum of Goa to promote young artists.

Talking about the experience Siddharth says, “I was in London for four years. I got my inspiration when I visited the Royal Academy Summer Exhibition where young artists were showing along with top artists of the world like Anish Kapoor, Sean Scully, and the likes. I started small, by designing a logo and starting an Instagram page. I wrote a document explaining what we were doing. The response was way beyond our expectations. We got 1500 applications and this, in a way, also talks about the lack of opportunities that young artists have. At the time, we didn’t have a team, curators of Van Gogh Museum in Amsterdam, who were family friends, and I, shortlisted the entries. There were artists who completely sold out on the first day. I particularly remember a photographer who was exhibiting for the first time ever and all his 15 works got sold in no time. Now, his works are represented by a gallery in Switzerland! And there have been many more success stories. Unfortunately, we could not sustain the festival after three years because of a number of issues, logistics being the main one. All the works were priced below INR 100000/- and we kept on 30 % commission. Plus, we did not charge any fees from the artists. I believe eventually we might do something on a shorter scale, for a week, as a pop-up in different cities in India.” 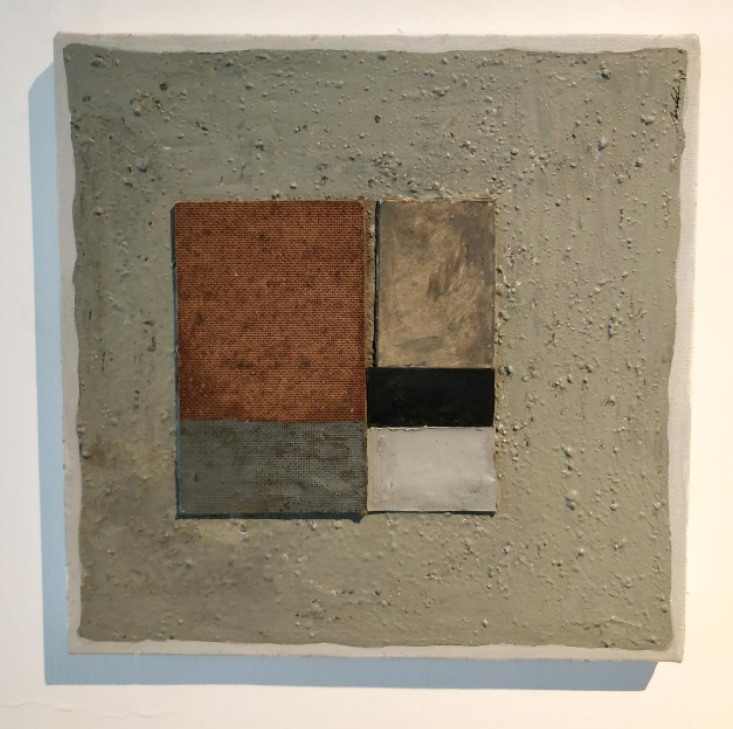 Currently, Subodh Kerkar is working towards designing a museum promenade and a major project in the offing is a Beer Museum. Sidharth’s work is correlated and he is busy with social media campaigns, creating content for brands, indulging in photography, making paintings and sculptures, helping people in designing places, and overseeing art direction. He also has his own label of fashion for men’s clothing and someday plans on venturing into hospitality! “I don’t feel any pressure, I am quite independent in the way I work. When it comes to social media I have my own team, when it comes to shooting my work in my studio, I have my own space, when it comes to the shirt brand, I have my own staff,” he says when asked whether he feels any pressure living up to his father’s breadth of work.

One of Siddharth’s recent work’s has been exhibited at Posthumous Dialogues with Souza: Homage to a Goan Artist, being held in MOG-Museum of Goa, Saligao, Goa till May 30. The event, comprising an exhibition of works of 27 artists – both upcoming and established including the likes of Atul Dodiya and Sudhir Patwardhan – is organized as part of a series of events commemorating artist-friends of Raza in the Raza100 celebrations by The Raza Foundation, New Delhi. For this work, Sidharth collaborated with his aunt, renowned artist who mainly uses charcoal, to create a colorful profile of F.N Souza, shown wearing a checkered yellow shirt. Siddharth went on to use paint and saw dust on Harshada’s charcoal painting and created a textured work, the kinds he has come to be known for. “There is a story around the work,” Sidharth says. “F N Souza’s mother was a costume designer and a tailor but Souza’s outfits were always usually blacks and browns. We imagined him wearing colourful clothes as if he was posing for his mother,” Siddharth says. Currently he is working on a series made on odd-shaped canvases. He is in talks for shows in Germany and London, and the next edition of the India Art Fair as well.