Gopal Parmar: Putting questions forth to the universe

Themes of divinity juxtaposed with earthly life find an enchanting balance in the art put forth by artist Gopal Parmar. He professes to his attempts to comprehend the unending conundrums of the universe in his oeuvre, in what could be deemed more familiar settings. With this quest, frequent motifs in his work include nature, destruction, creation and god. Parmar works extensively with etching on paper, as well as mixed media on wood and canvas. The medium often adds a textural heft to his pieces, such as in the case of the work titled ‘Research’. A mosaic of blue shards overlay one another to form two-thirds of a pie figure; the remaining tranche is comprised of black pieces, crisscrossed with light lines of white almost like a heavenly constellation (which is also the aesthetic mirrored in the entire background outside the circle). The surprise lies in the micro-details — each blue shard, if observed closely, is populated with tiny human figures illuminated by a spotlight in various modes of action. All in all, it seems like a commentary on completeness, one’s space in the universe and the innumerable overlapping facets that complete an entity. Another interesting work of his is ‘I Am Incomplete Without Water And Without You’. The charcoal grey backdrop of a bleak, almost dystopic landscape has only a single burst of sombre colour, a giant muted green-yellow fish swimming in the water in the foreground. Hints of submerged structures indicate flooded and lost habitation; on the horizon, the water seems to be nearing another unending cityscape. The most prominent figure in this work, besides the fish, is a large tree dominating the centre of the frame, which dense clouds floating through its bare branches. 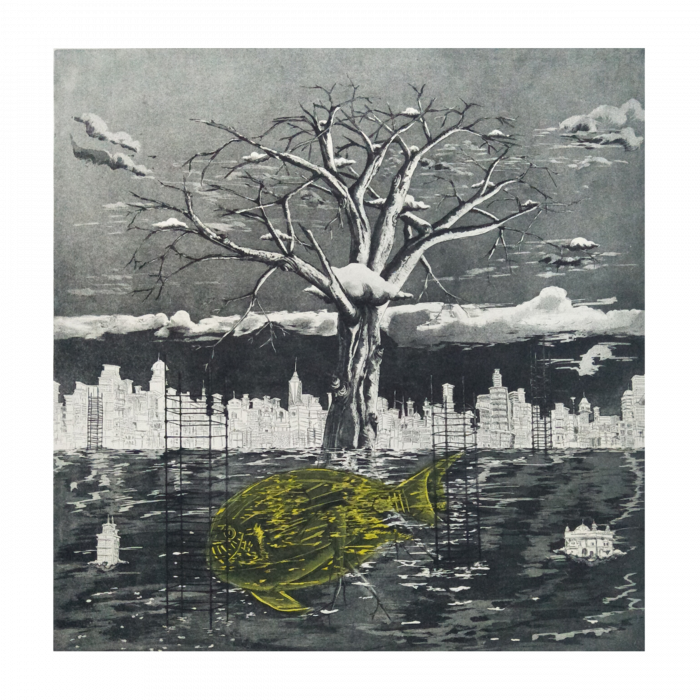 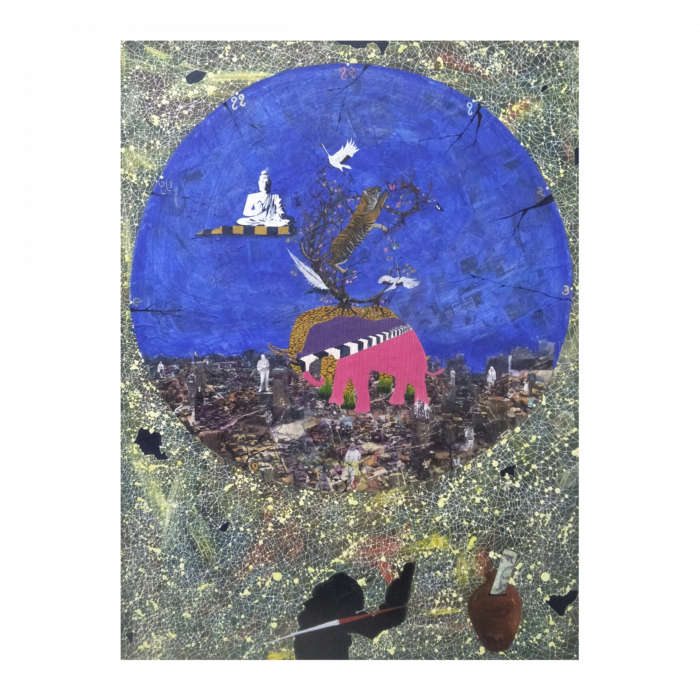 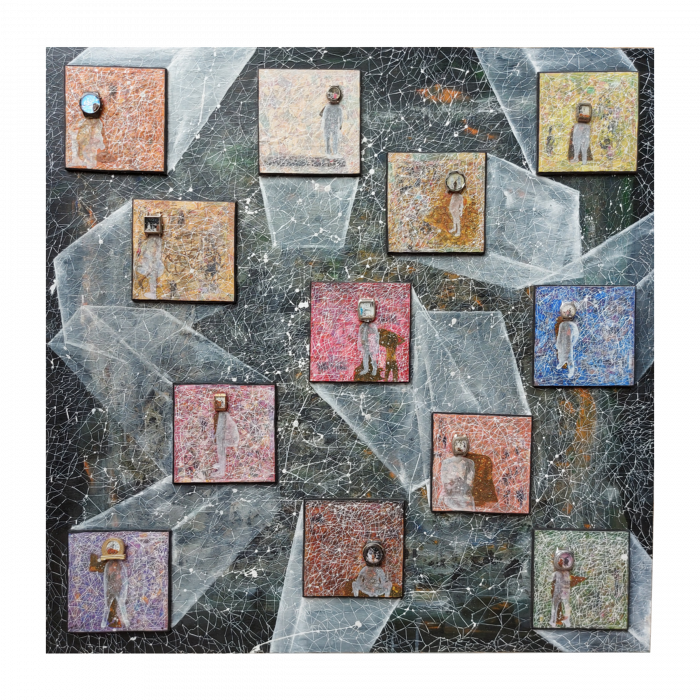 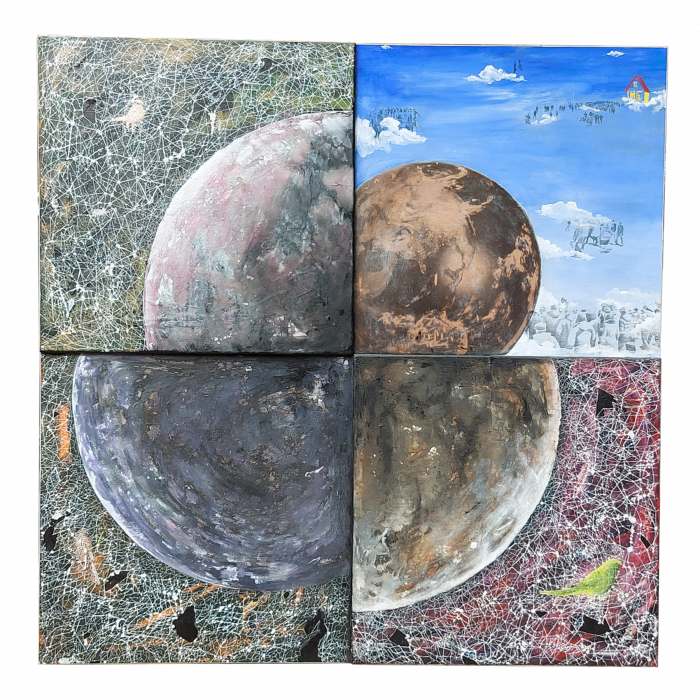 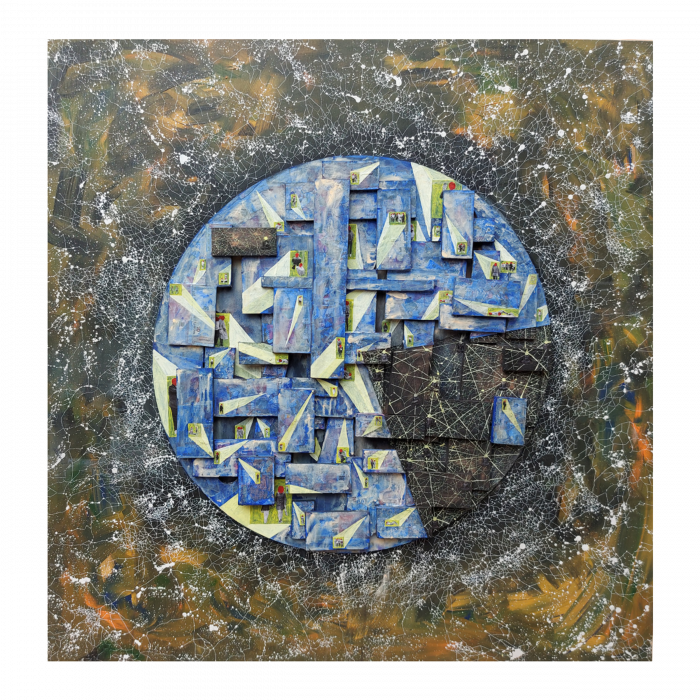 Mahendra Parmar: The life of chillies as poetry of form

Having dabbled in several mediums, but predominantly working with acrylic on paper to make his art at the moment, Mahendra Parmar‘s works include a unique element of ‘spice’. Take that quite literally, because chillies are the running theme in his latest art series, ‘Poetry Chilli’, with only the occasional platter or a sharp knife thrown in. One may wonder how much diversity can be achieved with a single motif, but Mahendra demonstrates exactly how an expert eye with colour, lines and rhythm of form can create poetry, magic and wonder to enrapture each viewer. There is a sense of cohesion in the successively numbered Poetry Chilli works, depicting almost life-like stages in its evolution. What begins with a vibrant ripe green, perhaps the prime of its trajectory, slowly transforms into muted, dull browns, greys and dark green hues by the end. But along the way, each individual rendition stays true to its unique colour scheme, beginning with bright and vibrant shades of green and yellow. These mature into darker greens, and also go through a phase of a bruised aesthetic, both light and dark, in violet, purple, red, magenta and so on. There are on this colour spectrum, also depictions in sage and stolid browns, blacks and dark green-yellows. Throughout, his deft panache for layering colour, shade and light into each painting is almost like the tadka that makes or breaks one’s meal — in this case, a series of successfully beguiling artworks. 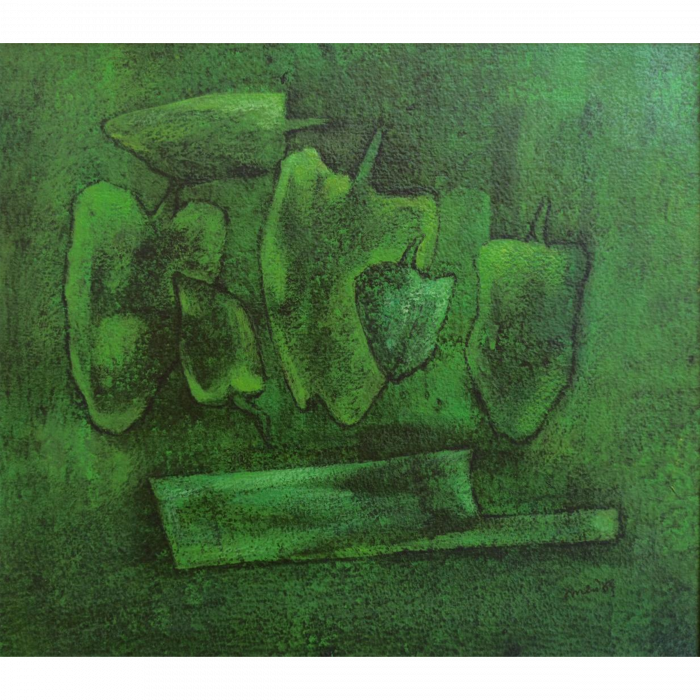 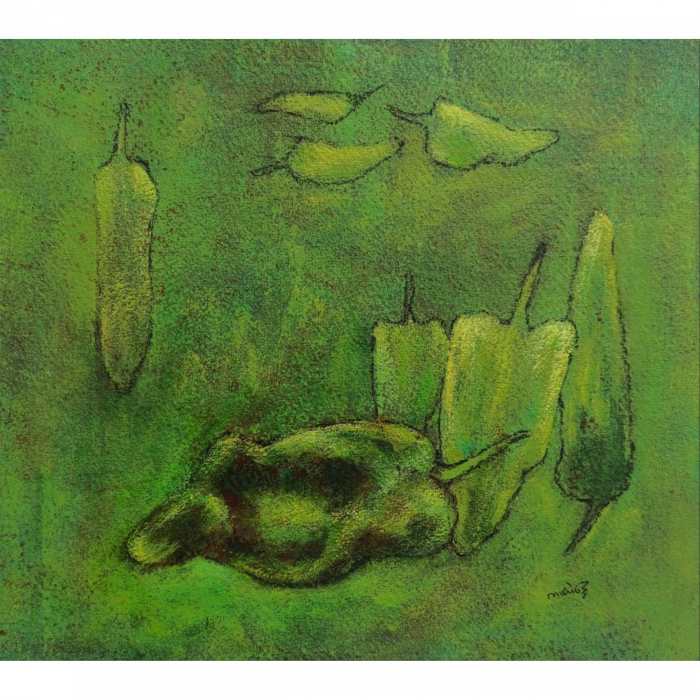 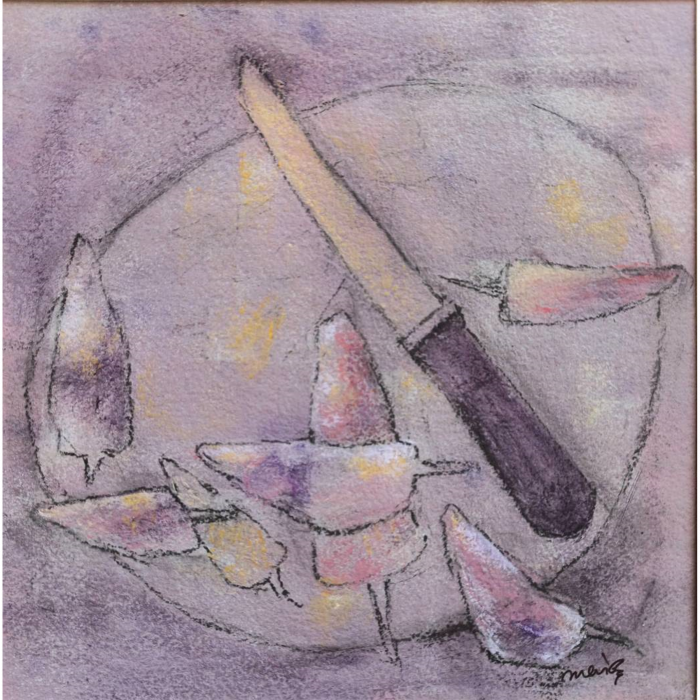 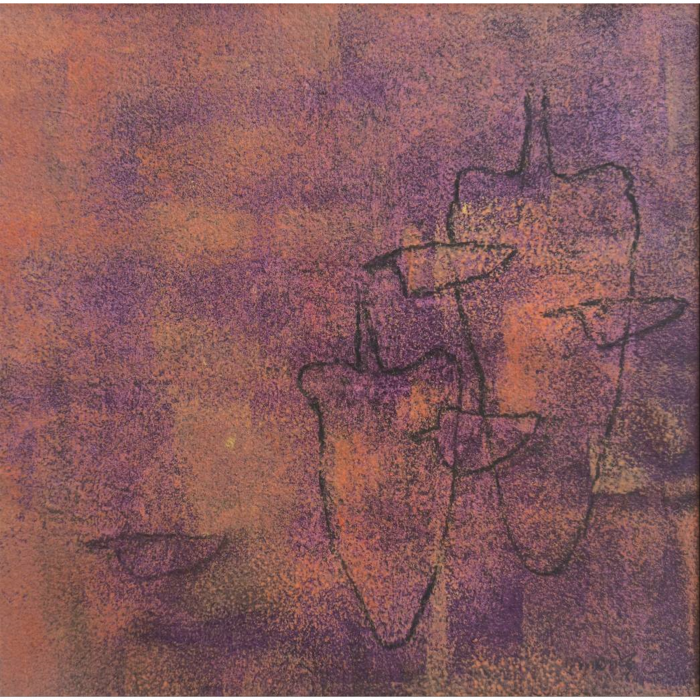 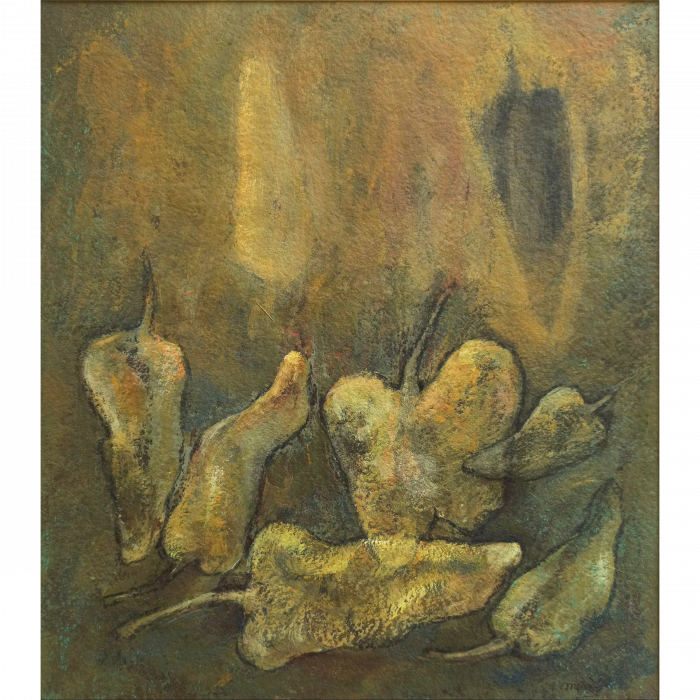 There is an undeniably niche and unusual aspect to the works of artist Manoj Darekar. He professes to experiencing ‘pareidolia’ — which essentially means the ability to see faces in absolutely anything. In fact, he admits that his inner mind monologue speaks the language of faces, and that these visages mirror his moods and emotions of the time. Faces show up in realistic objects or abstract forms in Darekar’s works, and within them also lie a diversity of features and expressions, adding to the sense of wonder that a viewer experiences. In this vein, he has developed a visual language of his own, and feels that it has become an alternate dimension in which he finds meaning and peace. Regard for example his mix media on paper piece titled ‘It’s all about freedom’. Bold strokes of white and blue are outlined against a predominantly vivid red background. The brushstrokes form a fantastical creature, almost like a bat or bird or butterfly, but imitating human features on a countenance that emerges. ‘A Couple’ is rendered slightly differently, using charcoal on paper. Once more, faces assert themselves on a multi-textured, compartmentalized background, gazing deeply into each other’s eyes, their lips short of a kiss, while the rest of the backdrop fades away into darkness or grey. 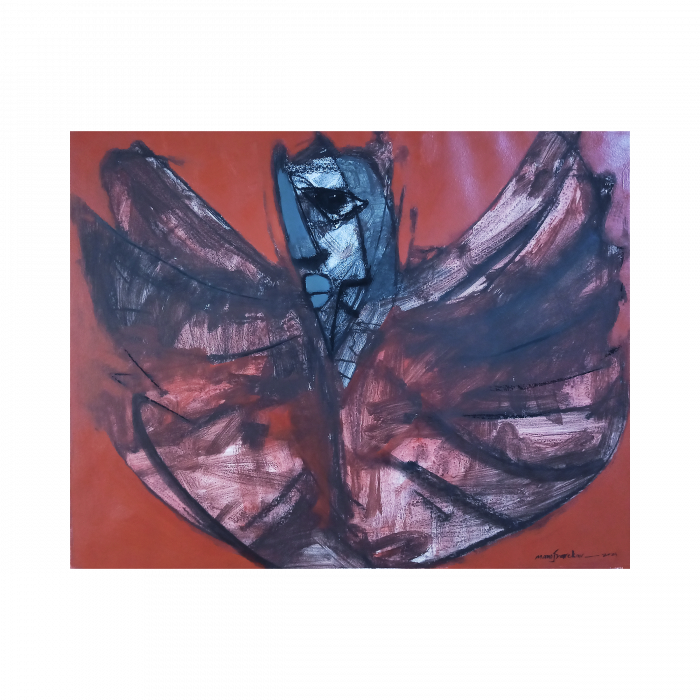 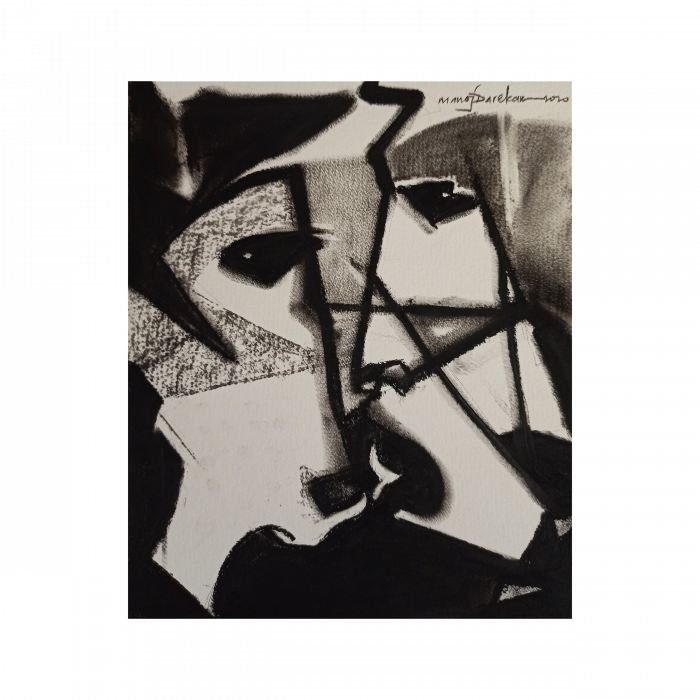 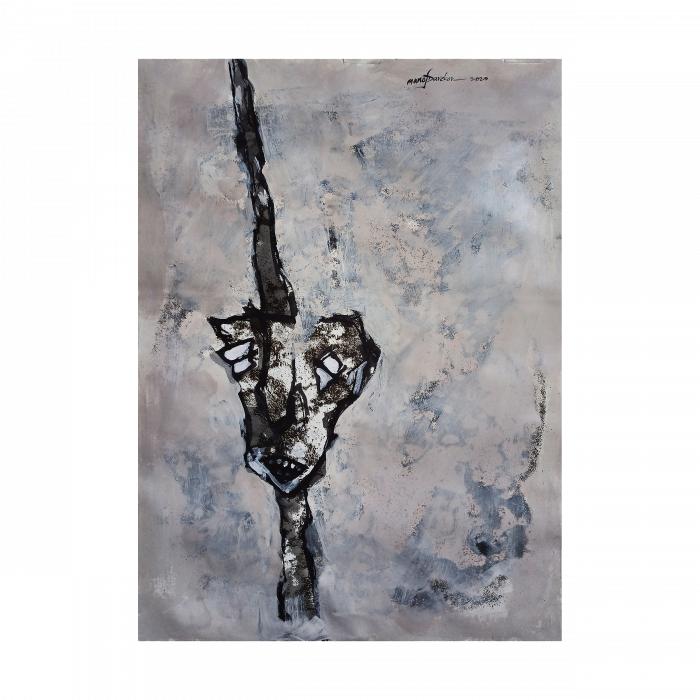 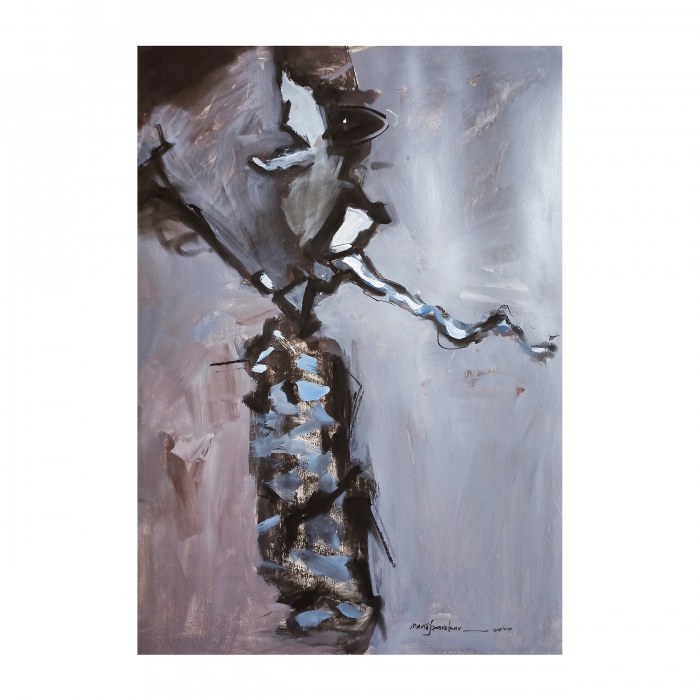 Raj Kumar Verma: The stark simplicity of a rural existence

Grounded in the vast rural swathes of India, this artist is quite the son of the soil. Artist Raj Kumar Verma‘s roots are in Hissar, Haryana, in the northern agricultural belt of the country, and his art works reflect that in fascinating ways. The simplicity and juxtapositions of this village life often find themselves gaining centrestage in his pieces, using the mediums of etching and aquatint. And so, frequent motifs include fields, crows and earthen pots. This is best seen in a piece like ‘Drewa 2’ — a lone, ink-black crow sits on an upturned earthen pot atop a shortened trunk, fashioned into a scarecrow, the function of which is ironically to keep birds away from the swaying crops that surround it. In the backdrop, a field bursting into bloom stretches away, and at a distance is visible a humble village settlement, with its typical low houses and sense of isolated intimacy. The overall tone lended to this artwork is very muted and almost deliberately dull, with no use of vibrant colour or abstract flourish mindfully. ‘No Time To Rest’ is another work that takes up the same suppressed tonality, which in this case lends itself a sepia tone. A sowed field in all its glory of bare brown is shown here, and a typical village coir charpai or cot; a wooden stick rests against the frame, a hookah and an earthen pot with an earthen glass on top. One can almost feel the warmth, silence and starkness exuding from the frame. 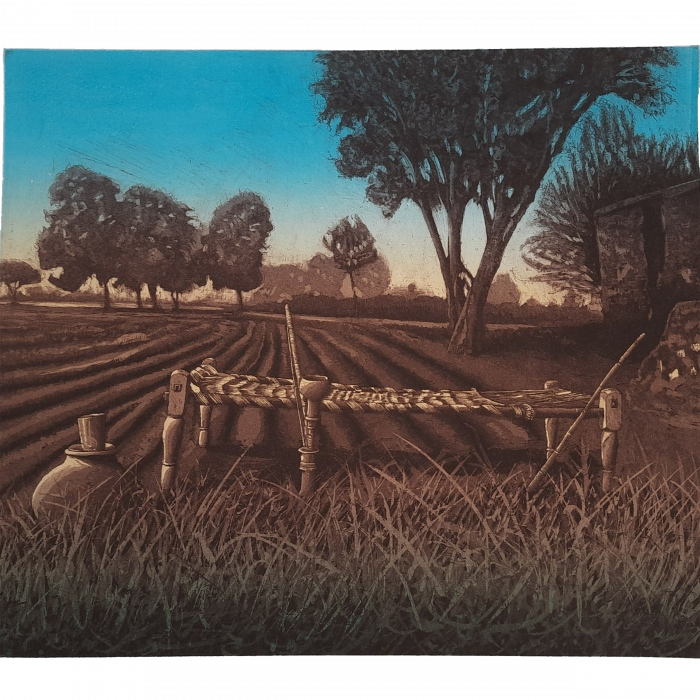 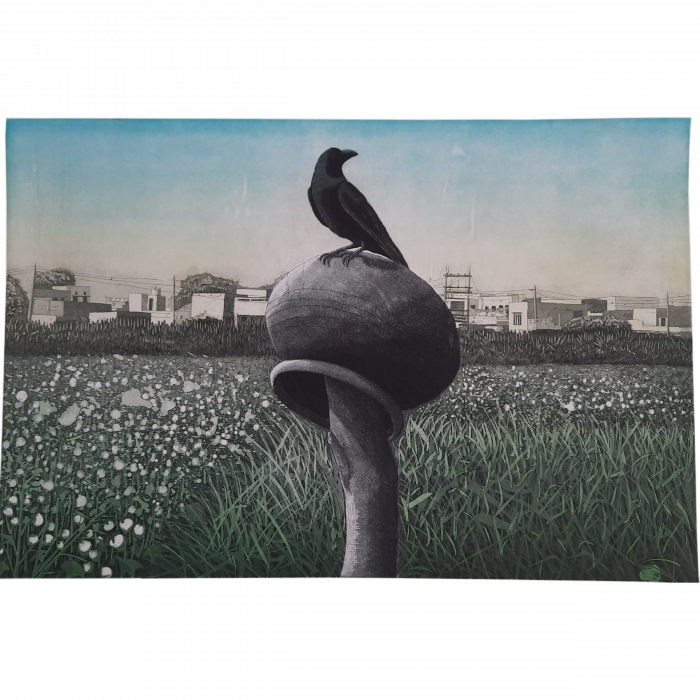 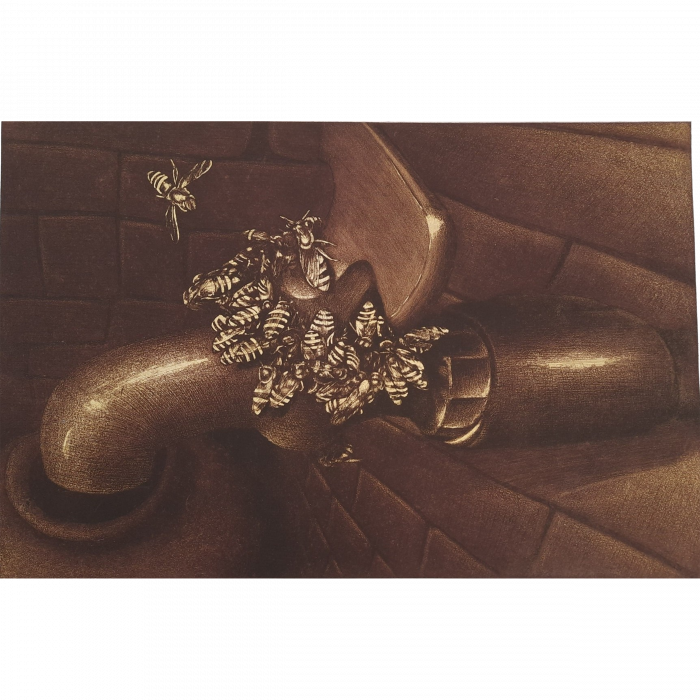 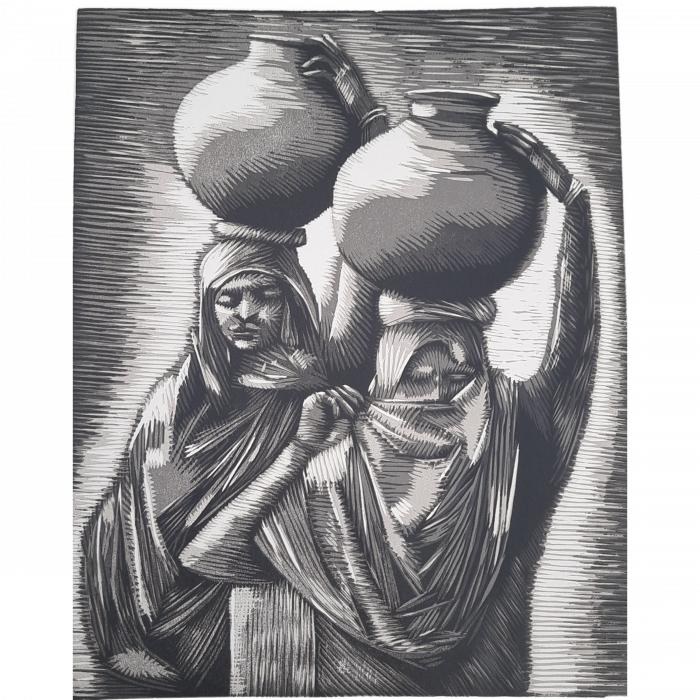